Number of students on campus increases significantly under McDavis' tenure

During Ohio University President Roderick McDavis’ tenure, the number of students on the Athens campus has increased by nearly 50 percent.

Between Fall Semester 2005 and Fall Semester 2014, the university’s Athens’ campus enrollment increased by about 9,000 students, according to data provided by OU’s Office of Institutional Research.

During that time, OU saw the second most growth in terms of total number of students on its main campus, with Northeast Ohio Medical University topping the list with about a 94 percent increase in the same time frame. 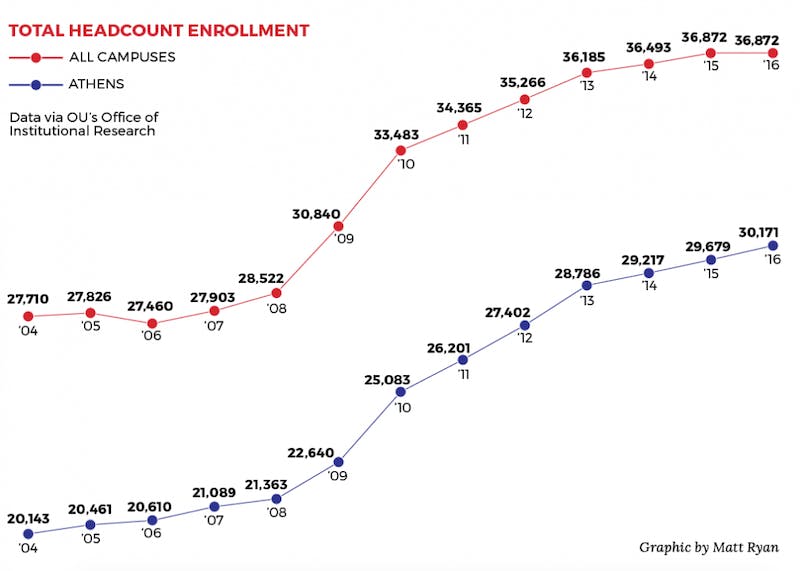 “It is hard to state the enormity of success that has occurred relative to enrollments under Dr. McDavis’ tenure,” Craig Cornell, senior vice provost for Strategic Enrollment Management, said in an email.

“This unprecedented growth equates to record breaking enrollments year after year for an entire decade,” Cornell said in an email. “These enrollments are also reflected in the fact that we have crossed record after record in any category that we would want to discuss from undergraduate, graduate, Athens, medical, regional and/or online enrollments.”

The regional campuses have seen rises and falls during McDavis’ tenure as president.

But when the economy picked back up after the recession, the roles were reversed, and regional campuses saw a drop in the number of students attending the five branch campuses.

Though enrollment on those campuses has plateaued slightly, enrollments are up compared to when McDavis started his presidency.

The most popular online program is the bachelor of science in nursing program.