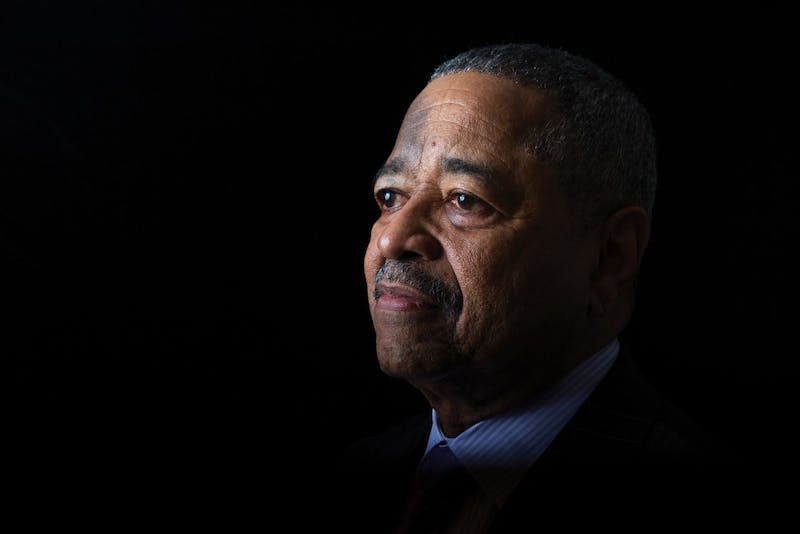 To recognize the look of the president’s office on this cold, dull February afternoon, you don’t need to have ever entered Cutler Hall.

But you might have to picture the bedroom you may have left back home, with all your childhood possessions boxed up, a too-small bedset resting in the back of a U-Haul. Picture the day you last laid eyes on the empty dorm room that you hated, or the day you said goodbye to the apartment that you loved.

You see it. The empty bookshelves, once lined end to end with everything: your favorite novels, the book that hasn’t been moved since the day it was first handed to you. The walls, once adorned with artwork, are now so bare and white that they seem to light themselves.

The room is not completely empty, mind you. There’s still a desk, though it is mostly clean apart from the desktop computer, a keyboard and a row of neatly stacked papers and folders. There is still a circle of chairs and couches in the middle of the room, waiting to be occupied by whomever the president can squeeze in a visit with before his tenure comes to an end on Feb. 17.

In the center of this room is President Roderick McDavis, a 1970 Ohio University alumnus, two days away from leaving Athens after nearly 13 years of being in charge of OU.

Most people only have to pack up and leave Athens once. He’ll be doing it for a second time.

“There’s been a lot of farewells, and at the same time, a lot of finishing business,” McDavis said Wednesday. “It’s been a little bittersweet.”

McDavis was announced as the university’s 20th president May 17, 2004, and in doing so became its first black president, as well as the second alumnus to lead the university. His appointment replaced former OU President Robert Glidden, who retired in June 2004.

While the Board of Trustees may have liked McDavis for his 30 years of experience in higher education and commitment to increasing Ohio’s national presence, students seemed to like McDavis simply because he was different.

“I like that we have someone with a bit of ethnicity instead of a bunch of stuffy white guys,” one student told The Post the day McDavis’ hire was announced.

His hire, though, didn’t simply represent a move toward diversifying the president’s office. The selection also meant a strategic decision to diversify the rest of the campus, with McDavis leading that charge. 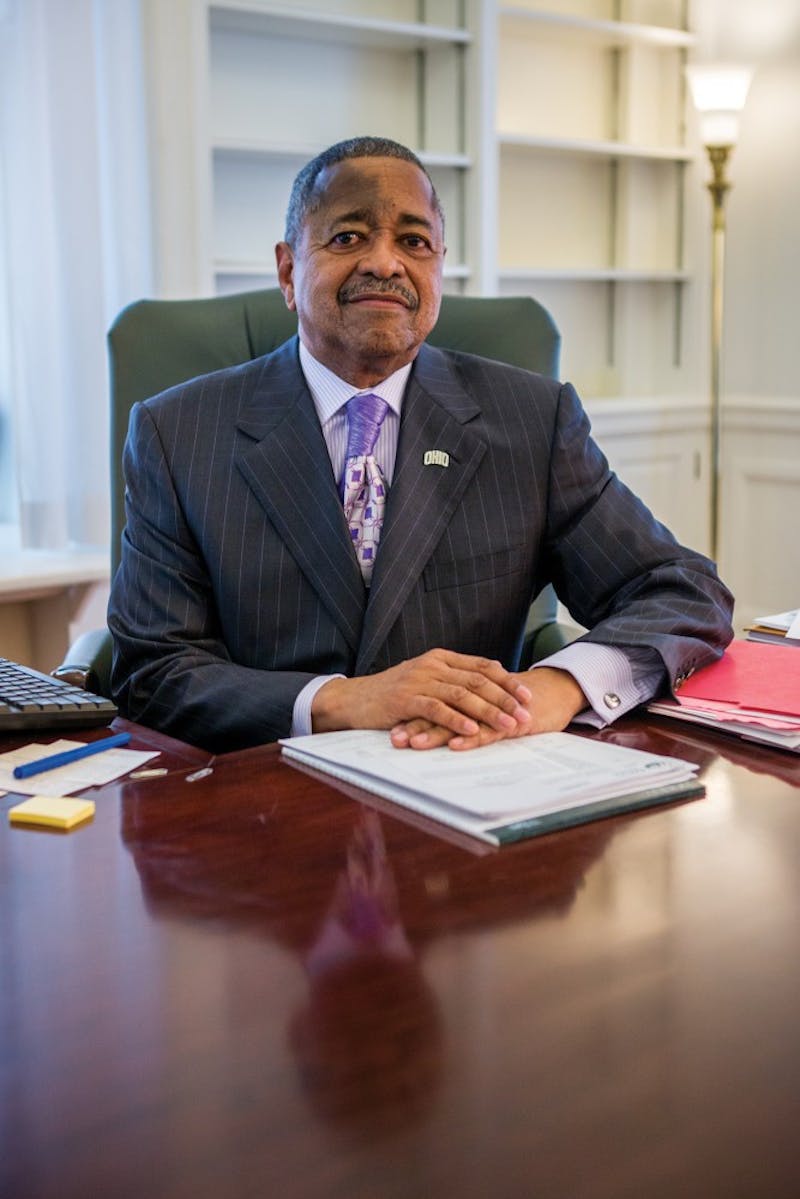 While one of the focal points at the time of his hire was recruiting more black students — a segment of the student population that McDavis said was lower in 2003 than it was when he was at Ohio in the late 1960s — the overall plan was to achieve as wide-ranging of a student body as possible. That meant attempting to increase the number of out-of-state, international and LGBTQ-identifying students in each year of the administration.

“I think President McDavis shares the values of a lot of Ohio University students,” Hannah Britton, a junior in the E.W. Scripps School of Journalism who gave a speech about McDavis on Martin Luther King Jr. Day this year, said. “I think a lot of people at Ohio University have a strong set of core values that make us such a strong campus … I think they’re values that we as a university have together.”

As an alumnus of the university, McDavis entered into his administration with an advantage of knowing what the student experience was like at OU, leading him to his interest in including student voice in his administration.

“When I became student trustee, President McDavis made it clear the voice of the student perspective is held in high regard,” Sharmaine Wilcox, a student trustee from May 2014 to May 2016, told The Post in an email. “He always encouraged me to speak up with my experiences and to not shy away from my seat at the table. I will always be grateful for that.”

Despite staunch support from the Board of Trustees, in addition to the three Student Senate tickets that endorsed his hire, McDavis’ first few years presented a number of trials for the administration, the faculty and the student body.

The first tuition increase of McDavis’ tenure occurred by the end of his first academic year, when a 6 percent increase was approved. The following academic year, McDavis cut four varsity sports programs from the university, including the men’s track and field team, which he was a part of for one year.

By the end of his third academic year on campus, multiple studies were released within a week of each other showing an overwhelming vote of no confidence toward McDavis. It was a bleak time for the administration, but one that both sides were able to work through and improve over the course of the next decade.

Some years of smoother sailing followed the no-confidence vote, but more rough points were in the distance. Additional tuition increases followed, as well as more battles surrounding athletics and a nationwide recession that meant budget cuts at public universities across the country. 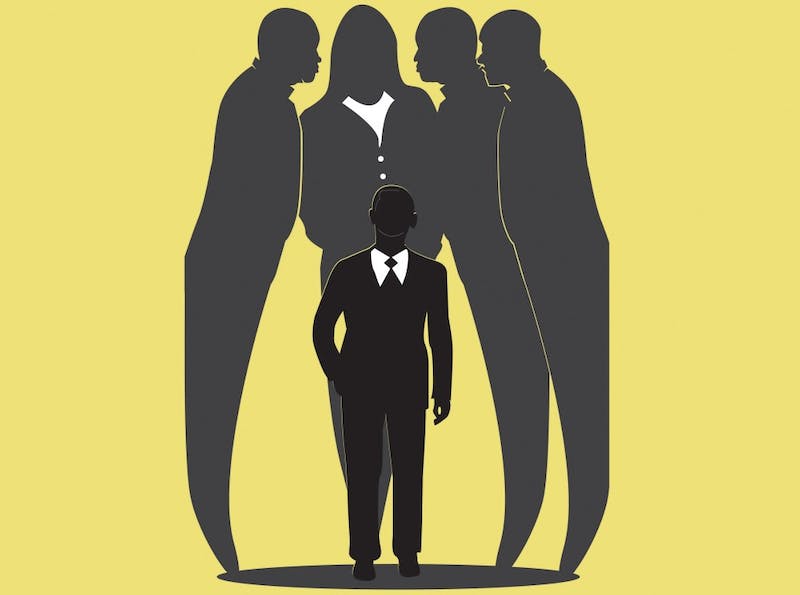 Perhaps the toughest struggle the administration experienced with students, however, was the 2015 incident in which a bat infestation drove the president and his wife, Deborah, out of their 29 Park Place residence and into an off-campus home leased by the university. The saga sparked student protests on campus — some of the largest the university saw during McDavis’ presidency. According to a Post report published Feb. 6, the Ohio Office of the Inspector General appeared to still be active in a months-long “investigation involving the purchase of 31 Coventry Lane,” following a so-called “problematic” verbal agreement made between John Wharton, the home’s owner, and OU Director of Athletics Jim Schaus. The office’s policy is to neither confirm nor deny the existence of an investigation until one is completed.

Though it might be impossible to ignore the trials of the McDavis administration, it’s hard to ignore what’s gone right, too.

Enrollment and application numbers are higher than they have ever been in history, McDavis said, surpassing 25,000 applicants for the 2021 class. He opened a steady dialogue with Athens mayors throughout his tenure to address the needs of the city and helped to add two branch campuses of the Heritage College of Osteopathic Medicine, in addition to five new residence halls.

But the president’s complicated tenure came to a head Feb. 6 when McDavis attended his final Faculty Senate meeting. A faculty body angered by the arrest of about 70 student protesters the previous week aimed its frustration and its grief-laden questions at the president, a former activist himself, who, during his college days, fought to get a black studies institute at OU and helped fight for civil and voting rights in the ‘60s and ‘70s. He stood before them, defending the police chief who authorized the arrest of those 70 students for criminal trespassing, following their protest demanding that OU declare itself a sanctuary campus. After McDavis left, Faculty Senate passed a resolution asking that the criminal charges against the students be dropped.

McDavis’ presidential farewell — scheduled to take place the next day — was canceled due to planned protests. His initial interview with The Post for that day was canceled, too, and rescheduled with the understanding that the president would not comment any further on what happened at the Faculty Senate meeting.

"I would hope that people look back 20, 30, 40 years from now and are like 'Wow, that guy had a really good stretch and really hard times,’ ” Dean of Students Jenny Hall-Jones said. “Because it wasn't easy. These were not easy times, and he's not always been well-liked. There's been moments, ups and downs, I think, from a campus-climate perspective."

McDavis’ time as the president of a university, for now, is over. That means next year will likely end a long span of him speaking at commencement ceremonies — a day he says is his favorite of every year, save maybe for the year he met then-U.S. President Barack Obama during his visit to Athens.

“Getting to know students from the convocation and having a relationship with them over four years, there is no better day on this campus than graduation,” McDavis said. “That’s been my most emotional day, is to look out at 4,000 students and know that each one of them is gonna have a better life.”

“Getting to know students from the convocation and having a relationship with them over four years, there is no better day on this campus than graduation.” - McDavis

Some students have had the opportunity to meet the president while on a campus tour, before they’ve even enrolled at the university. Most, however, are first introduced to him with the address he gives each freshman class — a loud, passionate speech that those close to McDavis say matches the energy he brings into work each day.

“He’s the Energizer Bunny. He never stops,” Amber Epling, director of presidential communications for McDavis, said. “He always comes in, and he’s always happy, and I don’t think people get to see that side of him very much. He goes nonstop, and he’s 100 percent wherever he goes.”

The next “wherever he goes” for McDavis is a job as the managing principal for AGB Search, a Washington, D.C.-based search firm dedicated to higher education leadership.

Exactly what kind of legacy McDavis leaves depends on who you ask. It’s different from person to person, with any number of leaps and stumbles to attach to his name over the past 13 years. But no matter what legacy he has had at Ohio, it doesn’t change the fact that OU is now in his past.

All McDavis could want now is a fresh start, a slate as clean as the walls of his office.