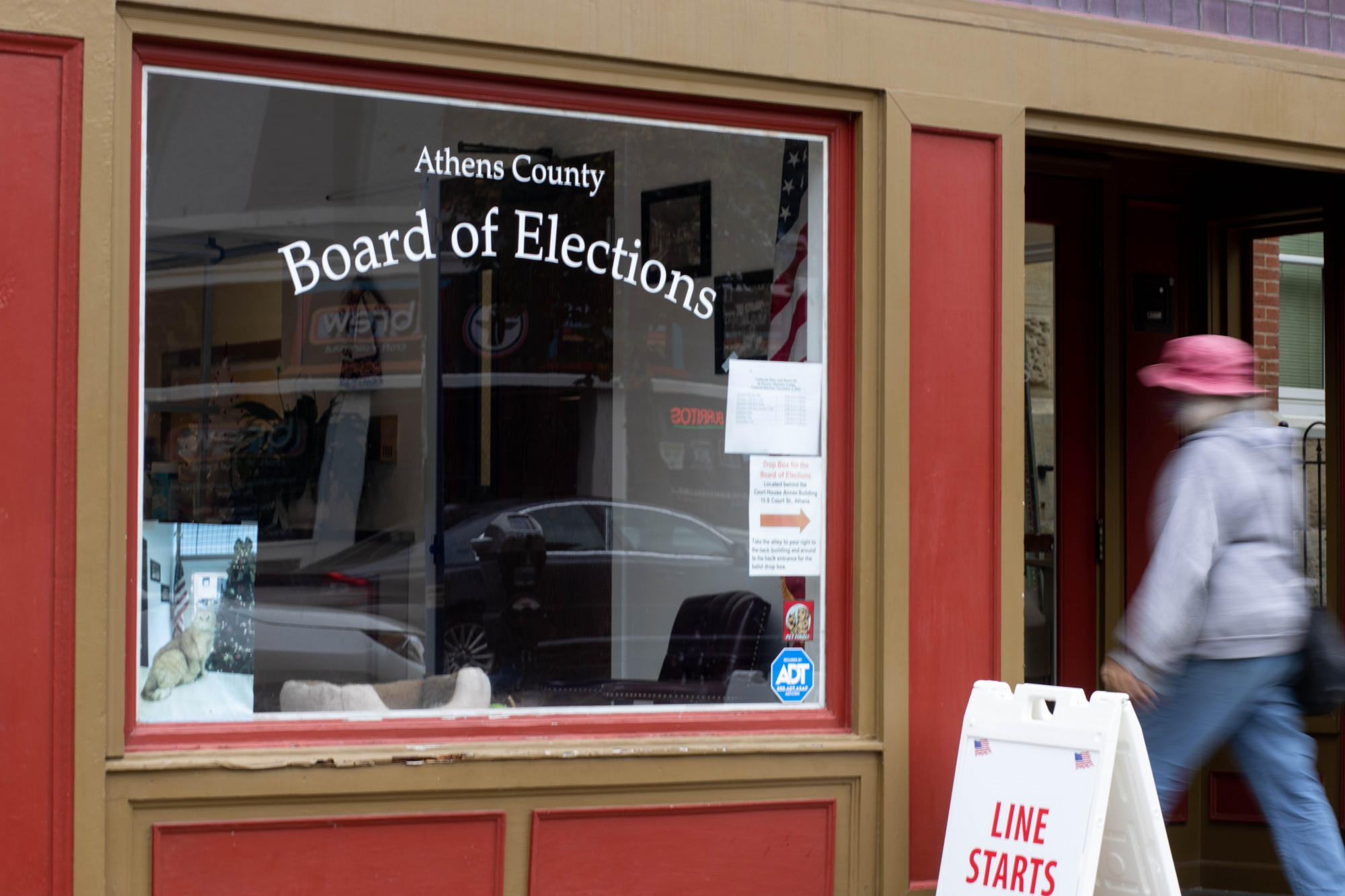 Athens citizens walk past the Athens County Board of Elections office on Court Street.

A Race to Represent

F ollowing nearly a decade with a Republican incumbent as the U.S. representative of Ohio’s 15th Congressional district, Allison Russo and Mike Carey are going head to head Tuesday to fill the seat.

Steve Stivers, who served in the position from 2011 to 2021, stepped down May 16 to become the CEO of Ohio’s Chamber of Commerce. In the previous Congressional election, he won the race by 63.6% of the vote, with his opponent, Joel Newby, only receiving 36.4%, according to a previous Post report.

Athens County voted to elect Newby with more than 57% of the vote. However, the rest of the district voted overwhelmingly to elect Stivers, according to a previous Post report.

On Sept. 26, Russo (D) made a day trip to the city to help make students aware of her campaign focuses. On College Green, she spoke with students about her goals to increase the rights of working families and focus on addressing climate change.

She also emphasized the importance of college-aged voters being involved in the voting process and being aware of the special election.

Russo was not alone in visiting part of her constituency, as Carey (R) spoke at a dinner hosted by the Athens County Republican Party on Sept. 30. His speech was focused on revamping the coal industry and preventing President Joe Biden from using public funds to implement programs he considers to be counterproductive.

The 15th District spans from Athens County to Madison County and parts of Franklin County, and the winner of the race will serve to represent the interests of citizens in those areas in Congress.

Pete Couladis, chairman of the Athens County Republican Party, said he believes voters should focus on the big picture of the race rather than the local effects.

On a national scale, keeping the seat republican and potentially gaining a few more as well could help to slow down Biden’s agenda, Couladis said.

“Some of the things (the White House is) trying to push, some of the spending plans and other things, they are going to bankrupt our country,” Couladis said.

However, a local perspective was emphasized by John Haseley, chairman of the Athens County Democratic Party, who believes it is important to have someone in Congress representing Athens County, as it faces multiple unique challenges

“Because of where we're located in the state, in a more remote region, we face more significant economic challenges, and a prime example of that is the lack of broadband,” Haseley said. “We're being left behind because we don't have the broadband infrastructure to allow us to compete in that economy.”

The Republican Party has pledged its support to Carey for the race and, in June, former President Donald Trump expressed his support for him. In a press release, Trump said Carey has his “Complete and Total Endorsement.”

The Democratic Party is backing Russo, who was endorsed by Biden on Nov. 1.

“She’s the kind of leader we need as we build back an economy that creates good-paying jobs, delivers more affordable health care, and puts middle-class families first,” Biden said in a press release. “I am proud to endorse Allison Russo for Congress to represent Ohio’s 15th District.”