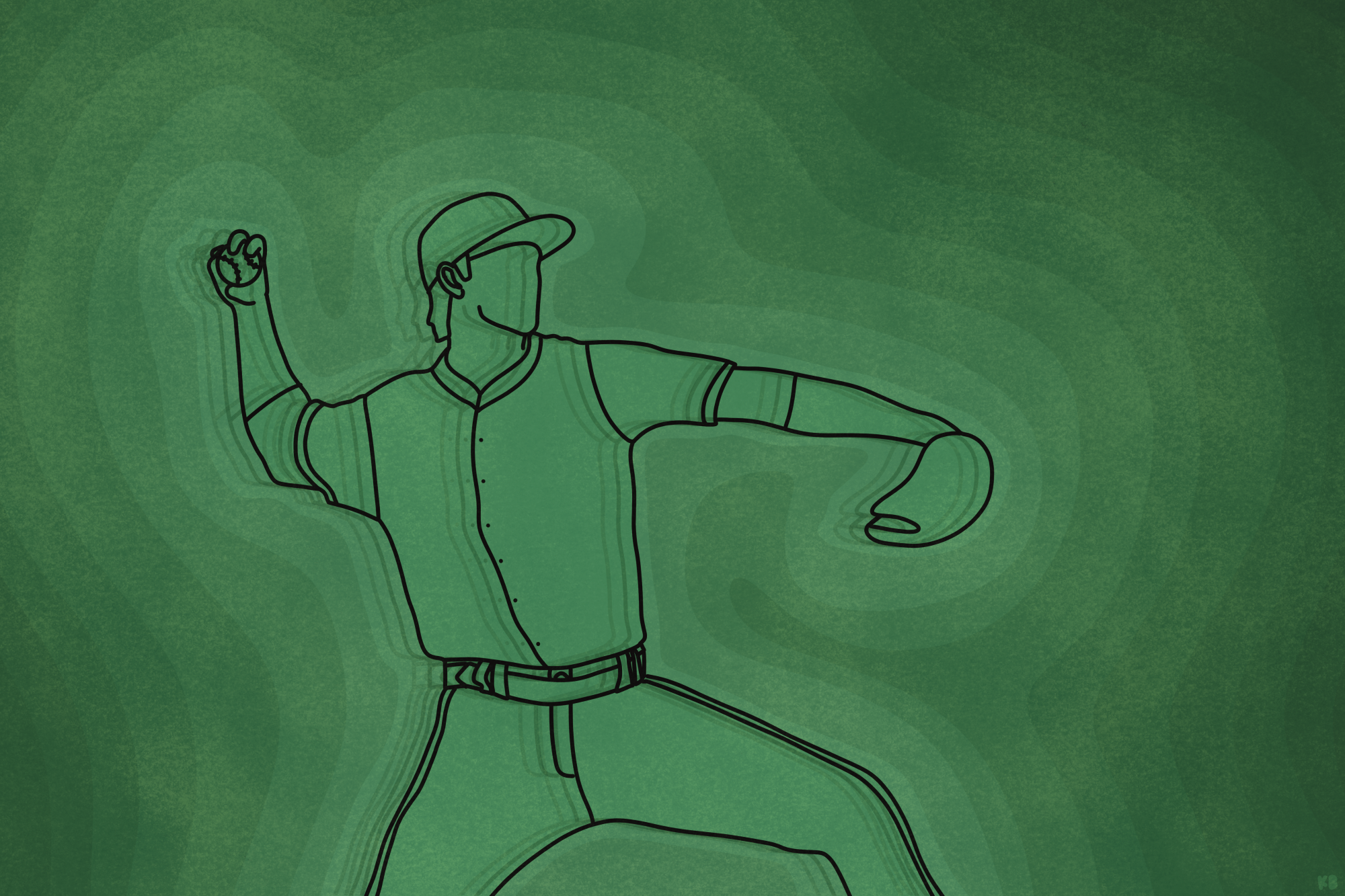 Ohio University faculty, coaching staff discuss the importance of the scientific study of biomechanics for pitching

Baseball cannot be played without pitchers. They are an integral part of the game and rightfully so. Pitchers can control the pace of play and change the entire outcome of a game

But, pitching can be risky business. The body isn’t made to move in that pattern.

Casey Grimm, a professional pitcher for the Florence Y’alls of the Frontier League, learned that during his recovery from a torn ulnar collateral ligament, a vital connective tissue in the elbow, and subsequent Tommy John surgery while playing college baseball at Wright State Lake Campus.

Tommy John surgery takes a ligament, or connective tissue, graft from another part of the body and repairs the torn ligament, named after pitcher Tommy John. John tore his UCL 11 years into his MLB career, but after undergoing an experimental surgery by Dr. Frank Jobe, John was able to play 13 more years. John was the first pitcher to continue to pitch successfully after such ligament surgery.

As of 2013, one-third of MLB pitchers have had Tommy John surgery. A healthy recovery is no longer miraculous, but common.

About five months into his recovery, Grimm began to throw again. He threw a few times a week and changed the distances at which he was throwing when he felt comfortable. He did every exercise prescribed by his doctors and physical therapists to ensure he could return to baseball.

Technology played a role in Grimm’s recovery and continues to play a role in his training. It helped expand his knowledge about what his body was doing when he pitched.

“A lot of people, they throw to get loose,” Grimm said. “But it's more like getting loose to throw.”

Most baseball players first throw a ball during toddler stages. As they get older, the motion becomes second nature, especially for pitchers. Even though throwing is a foundation of both baseball and pitching, it’s not something that the body naturally does.

“Overhead throwing is one of the most unnatural motions we have,” Dr. Chad Starkey, director of the division of athletic training at Ohio University and interim director of the school of applied health sciences and school of rehabilitation and communication, said.

Since the motion is unnatural, baseball and healthcare professionals have turned to studying biomechanics to better train pitchers.

Biomechanics is the study of biological systems, particularly their structure and function, using methods derived from mechanics, which is concerned with the effects that forces have on the motion of bodies, according to Encyclopedia Britannica.

Each individual has different movement patterns and mechanics. The makeup of all the muscles, ligaments, bones and tendons in the body move in patterns unique to each individual.

Pitchers especially have to be in tune with the arm and how it reacts to the forces being applied to it. The pitching motion heavily relies on the shoulder and elbow.

The main ligament, or connective tissue, in the elbow is the UCL. It connects the humerus to the ulna, holding the two bones together on the medial, or inner, side of the elbow. The UCL has three bands and creates stability within the elbow. It makes the snap of a pitching motion. 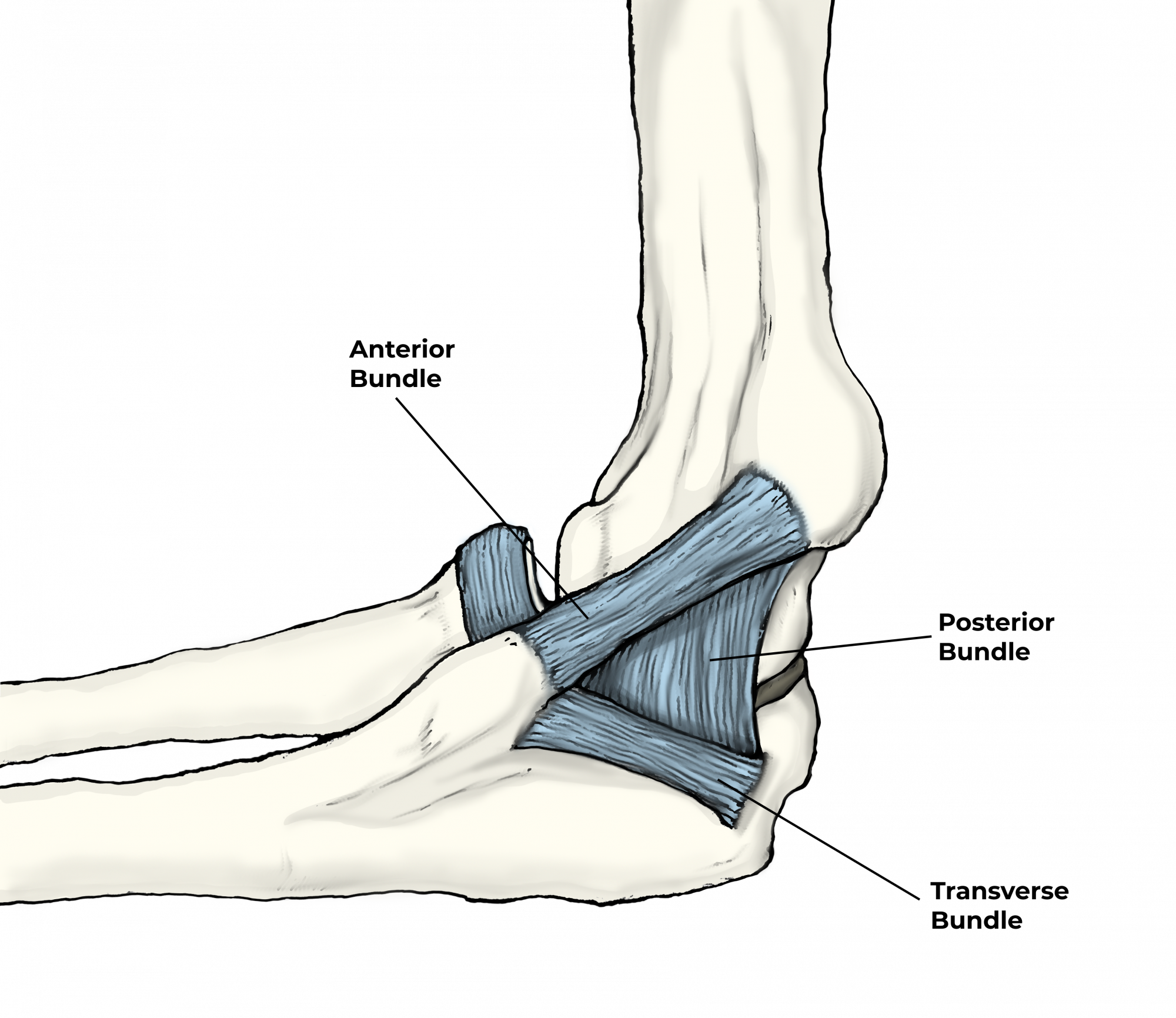 Three ligaments begin the pitching motion, and two slow it down. While most injuries happen on deceleration — or slowing — motion, it is different for all athletes because of their biomechanics. The body can only accelerate as fast as it can decelerate.

However, there can be a different snap: a ligament tear.

Pitching, and overhead movement in general, can attack the UCL. One of the toughest injuries the UCL ligament can face is valgus extension overload. In that, the pressing forces on the lateral UCL overload it. Forces enacted by pitching cause the elbow group to shift and move, causing stretching.

“It’s like an old pair of jeans or house pants if you wear them to the point where the elastic stretches out and they end up falling down,” Starkey said.

Some UCL injuries can be sudden, though. Elbows aren’t always the root of the problem. A majority of elbow injuries start in the shoulder region because of an athlete’s biomechanics. If someone does not have strong biomechanics, their pitching movement itself can wear down the fibers.

“Even though the pathology may be at the UCL, it is an upper extremity and whole body biomechanical problem,” Starkey said.

“During a functional movement, like an overhead throw, the entire kinetic chain, from the foot all the way up to the tip of the fingers, as you release the ball, is important in transferring energy from one position to the next,” Evans said.

While the kinetic energy starts around the lower back region of the body, or in the lower trunk, that energy created by the pitching motion is channeled in the shoulder and elbow region. The higher the velocity, the higher the kinetic values of these will be, adding more strain.

Power created by the lower body is channeled at the shoulder and the elbow.

“The mobility and strength that (pitchers) have in their hips and in their trunk and how much spinal rotation they have to be able to put the shoulder in a good position, and therefore the shoulder puts the elbow in a better position,” Evans said.

When all of those pieces are applied, it sets a pitcher up to control the forces. It also sets them up to better control their arm slot, where the arm comes around in the pitch. The lateral trunk tilt helps create a pitcher’s arm slot and it may remain the same for each pitch.

Even if it does, the kinematics of each pitch is different. Kinematics is the branch of mechanics concerned with the motion of objects without reference to the forces which cause the motion.

In a study published in Sports Health, it was found that six of the nine kinematic variables, including velocity and acceleration, were significantly lower in a changeup versus a fastball. The study also found unique kinetic patterns, or joint movements, for the fastball, curveball, changeup and slider in collegiate pitchers.

An athlete cannot wake up one day and throw a fastball at 85 miles per hour. It is not mechanically possible. Human nature and physics does not allow for it.

But, athletes can train to do so.

It’s like running a marathon. Preparing to pitch in a season takes patience and a well-organized training schedule with a mix of strength and conditioning, flexibility work and actual throwing, which is called the ramp-up process.

Pitchers must throw to grow.

Brown runs his throwing program on a backward calendar to ensure that each day is used wisely. He starts his calendar on the last day of the conference tournament to the first day of the next season. Within the program, the pitchers throw on flat ground for a month before hitting a mound for bullpen work.

The program has multiple phases that include pre- and post-throw recovery each day. The point of the regime is to simply prepare the body for the beating it is going to endure in the regular season.

To keep the body from adapting, Brown shifts around the exercises. No two days in the three-day rotation are the same. The main goal of each day is to activate the arm from the shoulder to the elbow.

Starting the throwing process off of a mound allows pitchers to understand the importance of the kinetic chain. Injury is most likely to happen at full weight-bearing foot strike because of the intense forces being applied to the elbow. Being late when the lead foot, or striking foot, hits the mound can make these worse.

The researchers applied the suit’s sensors to a NCAA Division III pitcher to test his pitching performance. The pitcher was granted a 15-minute warmup period before stepping onto a mound. When on the mound, he started on the same line each time and threw ten pitches per four quadrants of the strike zone.

The researchers found that although velocity may have soared for the bad pitches, the placement of the lower trunk and the pitcher’s center of gravity was not in an ideal location. The pitcher was able to throw the ball hard despite the body not being in the best position.

Technology continues to change the way pitchers, coaches and healthcare professionals look at the recovery process, too. Virtual reality has become a part of helping physical therapists identify how the mind reacts to the body and vice versa.

When injured, the body responds to centralized pain and begins to reprogram itself when there is a structural issue. This is called neuroplasticity.

“When you have structural problems, your body makes adaptations to that and then there’s changes in the brain and the nervous system,” Evans said.

Oftentimes, when athletes come back from injury, they perform in a manner they hadn’t before the injury. This is due in part to the reprogramming of the mind and body, as well as the athletes working to find a safe way to return to play while recovering.

For Grimm, it is his understanding of the importance of listening to his body that keeps him successful.

By the time he was ready to return to the mound, Grimm realized that his mechanics had been altered. However, altering his mechanics helped him add longevity to his career. He worked with his trainers to understand why his body was moving differently and did what he needed to in order to preserve his health.

“I got in depth with it all and I think that’s a big reason why I continued to be healthy,” Grimm said.