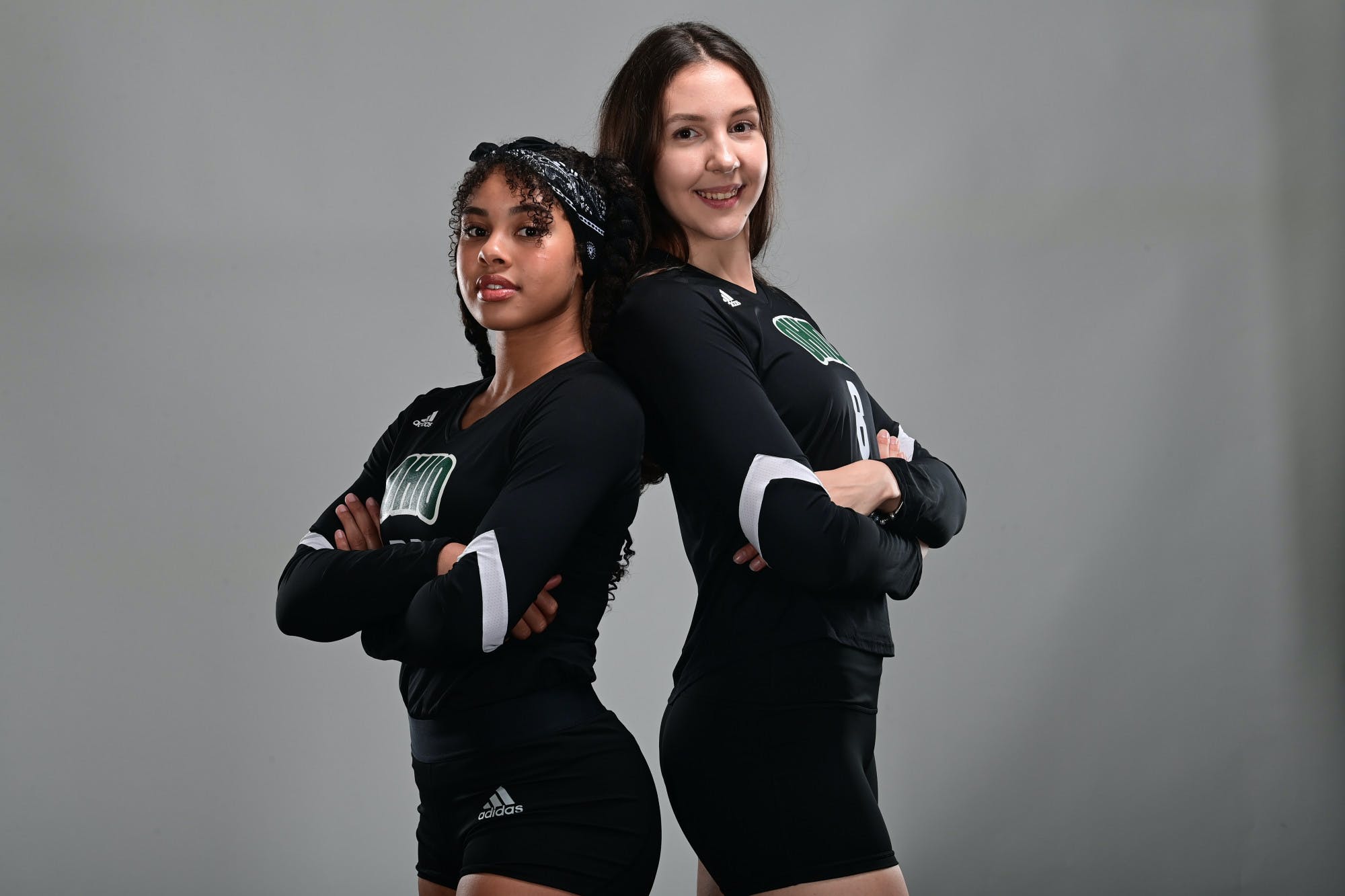 Deeper connections on the court

Volleyball: How Russia’s invasion of Ukraine has affected Anna Kharchynska and Kristy Frank

In a place halfway across the world, with a conflict that has gone on for over six months, it is easy for many people to ignore what is currently happening to millions of Ukrainians every day. But for Ohio’s Anna Kharchynska and Kristy Frank, that is impossible. It is a part of their lives, and its effects are something they have to deal with on a daily basis.

Kharchynska and Frank are teammates at Ohio, but they were also raised in Kyiv, Ukraine. Frank is a graduate transfer from Utah State and is playing her first season at Ohio in 2022. Although Frank had family in Ukraine, she was living on campus at Utah State during the initial invasion. Kharchynska is a true freshman and has represented her country several times. Kharchynska and her family were residing in Kyiv when Russia invaded.

It was around 4 a.m. on Feb. 24 when the first Russian missiles and airstrikes illuminated the night sky in Ukraine’s capital city of Kyiv. Russian forces had crossed over Ukraine’s eastern border only minutes before, and early that morning Russian President Vladimir Putin announced Russia’s plans for a military operation in Ukraine.

“Because my family was in Kyiv, and in the first week, it was the most dangerous place, we hid in basements for three days,” Kharchynska said. “There were huge planes flying near our house and we would hear explosions.”

“For me it was really scary because I was in the U.S. at the time,” Frank said. “I just saw posts on social media, and the first attack was on my city, so I saw explosions and it was like five in the morning. I called my dad, and he was sitting in the kitchen and he said that he had just heard a bomb go off, and one of the houses nearby was being targeted, so it was really scary and stressful.”

Russia’s full-scale invasion had begun and millions of Ukrainian citizens were left scrambling as many of their hometowns were destroyed by Russian missiles and airstrikes. According to the International Rescue Committee, over 7.2 million people have fled Ukraine in the fastest and largest displacement crisis this century.

Many of the refugees left behind most of their belongings and their homes without a plan for where they would live. Although they were out of the warzone that was Kyiv, many parts of western Ukraine were being targeted by Russian planes, and with traffic that could last for days, refugees were stuck in fear for their own lives.

“We took all of our stuff and moved to our friends,” Kharchynska said. “Then me and my mom made the decision to go to Romania.”

“I think they moved out immediately,” Frank said. “Maybe later that morning, and the traffic was really bad. They were just on the bus for a really long time. Almost two days trying to get to another city, it’s really stressful because I can’t do anything to help someone who’s just sitting in anticipation of what’s going to happen.”

Frank was a senior for Utah State at the time, and her teammate and best friend Inka Mehtola had family in Finland. Frank called her parents and told them that her teammate’s family might be able to help in some way. Although Mehtola’s parents had never met Frank’s before, they were willing to help.

“My teammate’s parents were very helpful,” Frank said. “They told them all the directions, they said ‘Yes, … you can come stay at our place’. So, my teammate’s mom even took a long train to go to the capital to meet them there and pick them up, so they really helped them. I don’t know where they would be without my teammate’s family. So I’m really grateful for that. They also helped them get separate apartments so that was really helpful.”

For any Division I student athlete, it can be difficult to balance athletic and academic life. But having to balance those while also worrying about the safety of loved ones and coping with the destruction of your hometown seems impossible, yet that is what Frank was tasked with.

“Definitely at first it was impacting my mental health a lot because coping with school, plus volleyball, plus what was going on in the country and trying to figure out how my family was doing,” Frank said. “It affected me a lot.”

Kharchynska was representing her country in the European Volleyball Confederation’s European Golden League soon after Russia’s invasion of Ukraine. The invasion created complications around where the team would play its matches.

Dealing with emotions while representing Ukraine wasn’t easy for Kharchynska and the Ukrainian team.

“Mentally it was very hard, but we tried to do all we could and cheer on our country in a hard situation,” Kharchynska said.

Although the war in Ukraine is still ongoing and its impacts are still in effect, Kharchynska and Frank both have had to cope with the state of their home country.

“It kind of grew to a new stage of just representing and playing for our country,” Frank said, “At first it was hard, but now I think we’re coping with it.”

“Here, it’s freer,” Kharchynska said. “I’m not afraid of anything, but in my country it’s really a disaster.”

Although Pew Research shows many Americans care less about foreign policy than they did six months ago, and news coverage of the Ukraine crisis has decreased, Ohio is doing what it can to bring awareness to the problems still faced by Ukrainians. It is making its first match against rival Miami ‘Ukraine night’.

“I think it’s great that we keep pushing the information out to people,” Frank said. “It’s important to remember what’s going on and to support Ukraine as much as possible, and I think it’s fair the University keeps doing this too because sometimes people forget about what’s going on.”

In the digital age we live in, attention spans aren’t built to follow six-month long wars, but the problems faced by Ukrainians are as present now as they have ever been.

“I haven’t seen my father since February and I still really miss him,” Karchynska said. “I’m afraid for my family because most of it is still in Kyiv.”