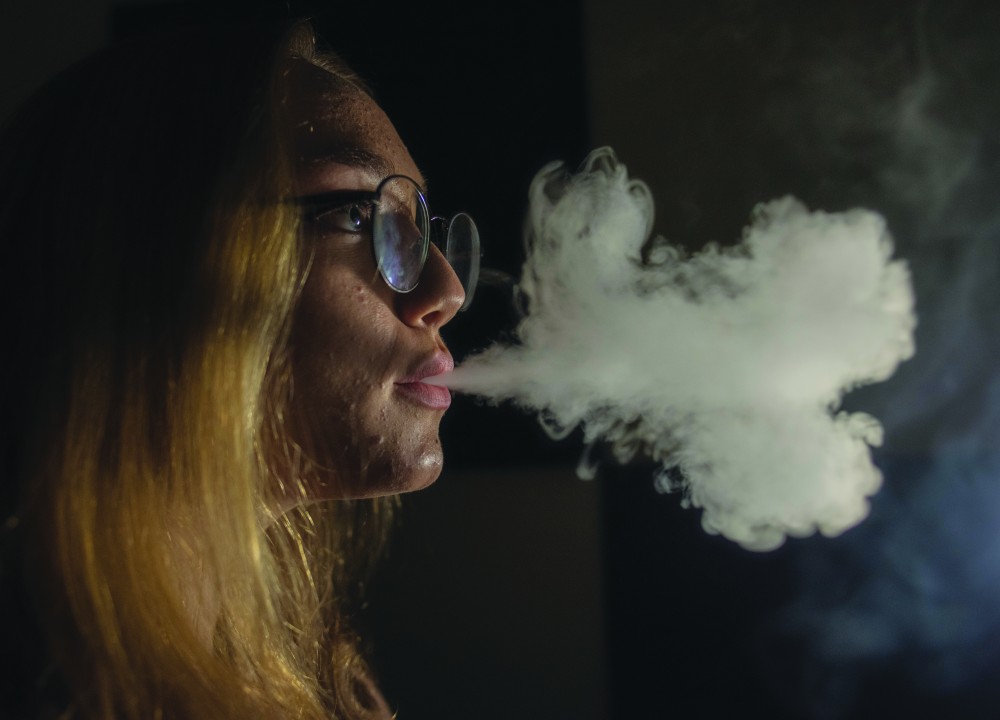 Ohio raised the age for tobacco sales to 21, but experts say there is more work to do

Clayton Lunsford used to be a runner in high school. Then he bought a Juul.

Lunsford, a sophomore studying mathematics, was first introduced to vaping after graduating highschool in 2018. He picked up a landscaping job during the summer before his freshman year, where he was surrounded by coworkers who used chewing tobacco, smoked cigarettes and used electronic cigarettes.

“Honestly, it made work easier,” Lunsford said. “Got me addicted real quick.”

He bought his first Juul soon after, figuring that his lungs would be able to take the abuse. At the height of his addiction, he was usually hitting his Juul 20-25 times a day and much more often during particularly stressful moments.

“Governor DeWine came into office, and the first thing he said was ‘I hate tobacco, and we’re going to raise the age to buy cigarettes to 21 because I want kids not to start.’ The world’s best intention. But the road to hell is paved with such intentions,””-Dr. Rob Crane, President of Tobacco 21

He has tried quitting several times, attempting to give up his habit cold turkey or only smoking in social settings. He’s seen limited success, making it a month or so at a time without using a vape.

Since then, Lunsford has been using a different device because his Juul habit had become too expensive, he said. He still has plans to quit in the future.

He is just one of the 3.6 million young people who have become addicted to nicotine during middle school and high school during the past two years, according to the Preventing Tobacco Addiction Foundation.

The foundation, also known as the Tobacco 21 project, has been working to decrease the use of tobacco by minors for over two decades. Around 2005, the project began working with data from Needham, Massachusetts, a small suburb outside Boston, which had seen steep reductions in tobacco use in minors after increasing the legal age limit to 21.

In 2015, the National Institute of Health found that about 4.2 million years of life would have been saved among people under 18 if the age limit was raised to 21 nationally. Tobacco 21 played a role in the push for Hawaii to raise the legal age for purchasing tobacco products to 21 in 2016, the first state in the country to do so. Then Juul came along.

First introduced in 2015, the sleek, concealable devices make up almost 75% of the current e-cigarette market, according to Bloomberg. Juul markets itself as an alternative for adult cigarette smokers. However, Juul also launched a savvy social media campaign, paying influencers to use Juuls on Snapchat, Instagram and other social media outlets to thousands of followers, Crane said. The original fruity flavors on the market also helped to rope in young users, according to a previous Post report.

Altria Group Inc., which sells Marlboro cigarettes in the U.S., acquired a 35% stake in Juul in February. The deal valued the vaping business at $38 billion, turning Juul’s two founders into billionaires.

Meanwhile, the Surgeon General estimates that one in five high school students and one in 20 middle school students currently use e-cigarettes. The Center for Disease Control estimates that of the 3.6 million young people currently using e-cigarettes, about 30% of them will eventually switch over to smoking traditional cigarettes, which, in terms of addiction, is like jumping from oxycodone to heroin, Crane said.

In April, the Food and Drug Administration announced that it had launched an investigation into over a hundred cases of people who have suffered seizures after vaping. The FDA, CDC and other public health organizations also have an ongoing investigation regarding an outbreak of severe lung disease associated with e-cigarette use.

But despite a significant increase in the number of young people using tobacco products, Tobacco 21 has been very successful in recent years. Almost 500 cities and counties and 18 states have raised the age limit, including Cleveland, Columbus and Cincinnati, and — following Governor Mike DeWine’s 2019 state budget being passed — the entire state of Ohio.

Juul actually supports the push for 21 despite its widespread use by young people. After being pressured by the FDA, Juul sent representatives across the country to lobby for states to raise the age limit.

While this may seem like a positive move, it may actually be harmful for the movement, Crane said. Due to preemption of state law over local ones, Juul is able to get state laws passed in a way that would ensure retailers would almost never get caught selling to underage consumers, he said.

“In Virginia, Arkansas and Utah, they stopped any possibility of a city coming in and overriding Juul, or banning flavors, or doing anything to restrict sales near schools or whatever other things, which might be done to reduce youth usage,” he said. “They made sure that no one was ever going to enforce age 21 because you put it in the hands of the police without giving them any money.”

“This is … essentially a move that will likely kill most mom and pop vape shops and companies that responsibly and ethically produce their juice in the United States,”-James Wanke, general manager of Silver Serpent Exotic Gifts in Athens

While Ohio has no state preemption for local tobacco laws, Crane, who lives in Columbus, still believes that the state passed a terrible bill.

“Governor DeWine came into office, and the first thing he said was ‘I hate tobacco, and we’re going to raise the age to buy cigarettes to 21 because I want kids not to start.’ The world’s best intention. But the road to hell is paved with such intentions,” Crane said.

Crane said Ohio’s new law will be difficult to enforce.

“What they did was simply cross out age 18 and set it to 21 and had the police do the enforcement but no required enforcement,” he said. “And there is no real money designated for this effort.”

Tobacco 21 would like to keep pushing to change local tobacco laws in Ohio, but once a state law has been passed, the political will “goes out the balloon” for local laws, Crane said.

But even though the state law prohibits the sale of tobacco products to those under 21 in Ohio, many tobacco shops will either skirt the law or be unable to identify fake IDs used by many college students, Crane said. He has never seen a tobacco shop go out of business as a result of a change in the age limit.

Some government agencies occasionally send out “underage decoys” to tobacco retailers to see how often they sell to young people. For instance, Columbus has issued fines to retailers who sold to these “decoys,” and the city is currently undergoing its third wave of inspections.

Some tobacco retailers are trying to fight back against the new laws. James Wanke, general manager of Silver Serpent Exotic Gifts in Athens, said that while his shop will follow the new law when it takes effect in October, raising the age limit could prove to be a death blow to smaller retailers like his.

“This is … essentially a move that will likely kill most mom and pop vape shops and companies that responsibly and ethically produce their juice in the United States,” Wanke said in an email. “To everyone here at Silver Serpent, many of us whom have been vaping since the industry was formed, this is a battle for the soul of the vaping community as a whole … so I really hate to see it go down this way and for big tobacco to walk away with the win.”

As someone who is under 21 and addicted to nicotine, Lunsford has mixed feelings about the raised age limit.

“I understand the risks. And I'm living it right now, being addicted and having to deal with the problems that come along with that,” Lunsford said. “At 18, (you) can sign up and die for your country but not vape. It doesn’t seem right. It seems very consistent.”

At the moment, Crane and Tobacco 21 are occupied with four different laws at the federal level. He spends at least one day a week in Washington D.C., trying to get the federal government to pass better tobacco laws as well. The FDA, which enforces federal tobacco laws, currently sets the legal sale age of tobacco to 21.

Youth tobacco use is personal to Crane. His nephew, who lives with him in Columbus, is addicted to his Juul.

Lunsford would like to get back into running but said e-cigarettes have taken a toll on his health.

“I had decently strong lungs before I started. So I thought, ‘It’ll be fine. My lungs can take it.’ Had I only done it at work or something, but then I was doing it day to day, and it really took a toll. Now when I go out on a run, I can definitely tell the difference. I just don’t have the lung capacity that I used to.”