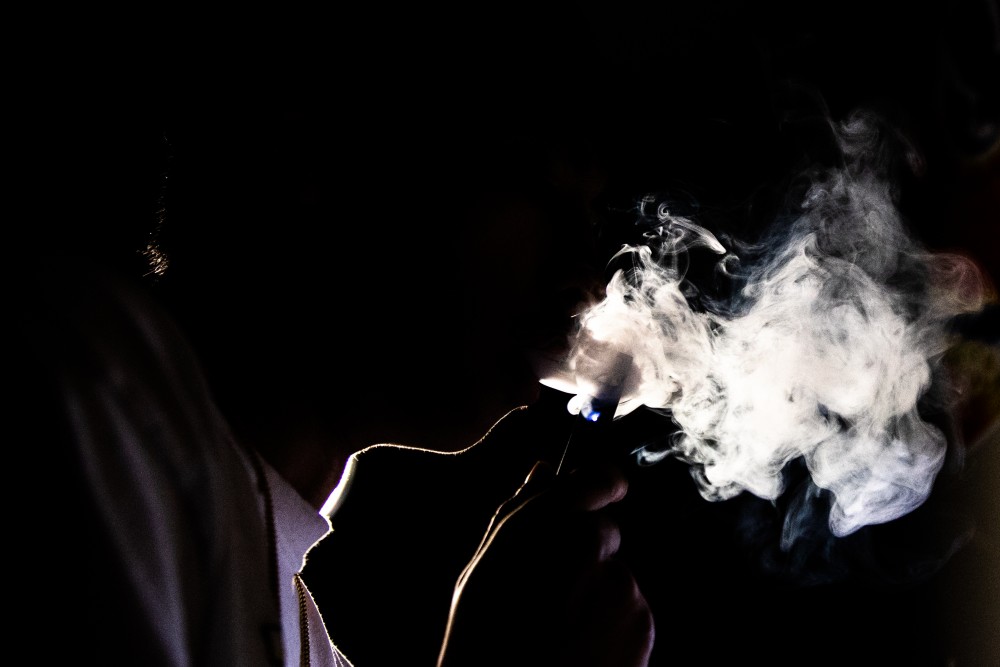 Juuls have risen in popularity, especially around Athens

While walking along Court Street, people might walk through a cloud of mango-flavored vapor and see the remnants of the discarded juice containers for Juuls, the new cigarette butts along street gutters.

These sleek, flash-drive-like electronic cigarettes have taken over the e-cigarette market and have become a staple for many students at Ohio University. Their juice is contained in rectangular Juul pods, which plug into the top of the vaporizer portion of the Juul and aren’t much bigger than a thumbnail.

E-cigarettes have been around since the early 2000s, when Hon Lik, the father of the modern e-cigarettes, created a smoking alternative after his father died of lung cancer.

Since then, e-cigarettes have had a consistent growth in popularity through sales. In 2008, e-cigarettes made $20 million in sales; last year, that number swelled to $10 billion.

The Juul was first introduced by Pax Labs in 2015. As of July 2017, Juul Labs has become an independent company. It is now valued at more than $15 billion. That’s 75 percent of the e-cig market, said Dr. Rob Crane, the president of Tobacco 21, a national initiative to raise the sales age of tobacco from 18 to 21.

“They’re the iPhone of vape,” Crane, a clinical professor in the Department of Family Medicine at Ohio State University, said.

An e-cigarette is powered by a battery in the device that is used to atomize a nicotine-based liquid often referred to as “juice” or e-liquid. Juuls’ ingredients include nicotine, benzoic acid and propylene glycol. Depending on the brand one chooses to smoke, the concentration of nicotine varies, making some brands more addictive than others based on nicotine concentration, according to White Cloud Vapor.

Juul stands far ahead of other e-cigarettes in terms of popularity. Silver Serpent Exotic Gifts, 55 N. Court St., sells Juuls for $35. Juul pods are $17.65 when paying with cash and $18.25 when paying with card. Now most gas stations and smoke shops in Athens keep the popular item in stock. 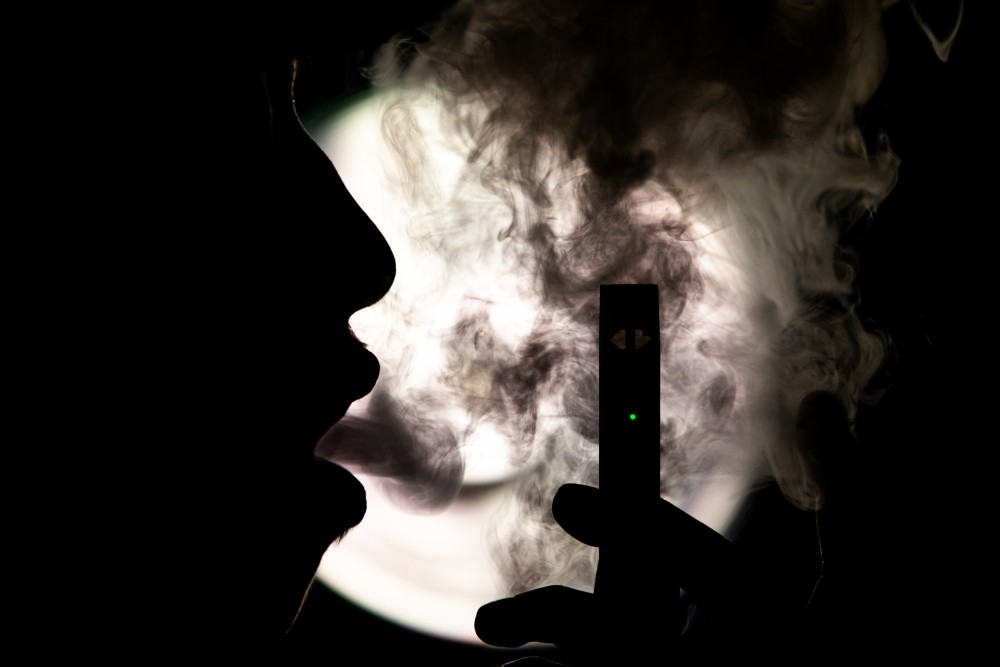 Justin Markarian takes a hit from his juul against a spotlight he uses to illuminate his workspace while he works on Studio Art projects.

“We picked up Juuls about a year ago, and, after that, it quickly became one of the most quickly selling, hardest things to keep on the shelves,” Cory Boggs, the operations manager of Silver Serpent, said, “It definitely became a big part of our daily margins, one of our biggest things that we supply on.”

The employees at the shop put in place a strategy to keep them on the shelves. They order a certain number of Juuls, and, if they run out, they double the order for next time.

“(Juuls) are one of those things we’ve had to double up on countless times. We’ve got our own warehouse supply in the back, it feels like,” Boggs said. “People will come in at all hours of the night from bars. Sometimes the only thing they can say are ‘Juul pods’ and the flavor they want.”

While Juuls are hard to keep in stock, Boggs feels as though there are better options, such as the brand Suorin. Suorin’s vape products offer more juice and less nicotine concentrate and are cheaper than Juuls, Boggs said. Even though he feels as though people are missing out on a more efficient product, that doesn’t stop people from going with the trends.

“A lot of it is just the hype,” Boggs said. “I’ll explain it to people, and at a point they can’t comprehend it and just say, ‘Give me what everyone else has.’ ”

Aesthetics and trends aside, some people don’t see the reason behind the popularity.

“I think that a lot of people use them to be cool. A lot of people who aren’t even addicted to nicotine will start smoking them to fit in.”Chloe Meston

Sydney Bruckner uses vapes on occasion. A junior studying health services administration, Bruckner was given a Juul a year ago, but she has since switched to using Suorin as she thought Juul was getting too expensive.

“I just had a Juul because my brother had a Juul and he kind of gave it to me,” Bruckner said. “I think it’s just a social thing.”

Chloe Meston, a senior studying communication studies, isn’t a fan of Juuls. “I think that a lot of people use them to be cool,” Meston said. “A lot of people who aren’t even addicted to nicotine will start smoking them to fit in.”

Gauging the exact number of Juul users can be difficult, but the sales numbers are able to give an idea of how many users they may have. Juul Labs was reportedly making 20 million products per month in 2017, including the vaporizer and pods.

While they rise in popularity, some critics are skeptical of the health issues involved with Juuls.

“Juuls are (a) highly addictive format,” Crane said. “They changed the formulation found in vape pens to a salt formulation, which is easier on the back of the throat. One pod is equivalent to a pack of cigarettes.”

However, that formulation, while highly addictive, is seeking to do more than hit smoother than other e-cigarettes. The flavors are able to rope in young users and have a wide variety, including mango, cucumber and fruit punch, which are marketed to seem appealing and trendy.

“If Juul had no flavors, they would have no market value whatsoever,” Crane said.

Juul Labs says that it is trying to provide adults with a smoking alternative, according to its website. Crane, however, is skeptical that adults trying to quit are the company’s main target. Rather than targeting consumers who already smoke, they go for people who don’t, he said.

“The thing is, if you’re a 40-year-old smoker trying to quit, you don’t need flavors,” Crane said.

Crane thinks that Juul Labs is intentionally going for the younger people to get them hooked on nicotine before they have any sort of addiction, and the flavors are the key to marketing to young people. 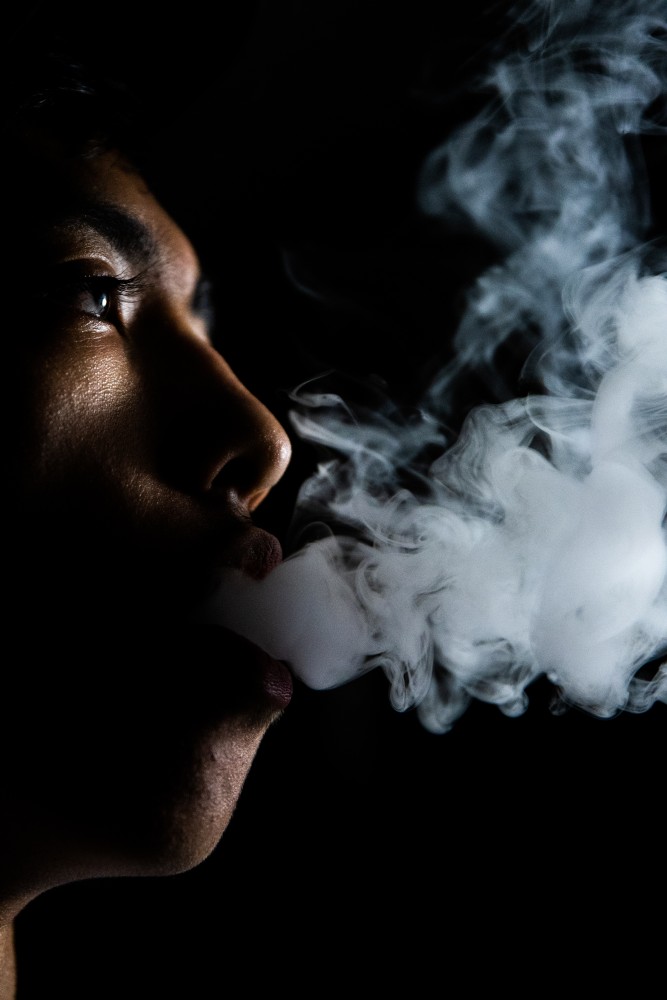 Ohio University Freshman Justin Markarian takes a hit from his Juul while working on an art project.

A recent study done by the University of San Francisco found that smoking e-cigarettes daily doubles the risk for heart attacks.

A lot of the popularity can be credited to the company’s social media savvy. The company markets itself on its website as having strict social media codes that only depict of-age users using a Juul responsibly. The products are made to look trendy, and its website depicts attractive people using a Juul.

Justin Markarian, a freshman studying studio art, actively uses a Juul. He believes it is a good alternative to smoking cigarettes, yet he shares some of Crane’s beliefs in the target audience.

“It’s always been used by teenagers and college students, never people who are trying to quit,” Markarian said.

“My favorite flavor is Virginia tobacco,” Markarian said. “No one ever asks to hit it (at parties).”

While he knows it isn’t a popular flavor, he can stand the taste, allowing for him to keep the pods to himself longer.

Markarian does not think people should start using a Juul if they aren’t already addicted to nicotine. Otherwise, you’ll be hooked like he is.