News From the Year

The past academic year was a busy year for The Post. Here are a couple of the biggest stories:

To bring attention to the issue of sexual assault, students held different events throughout the academic year. 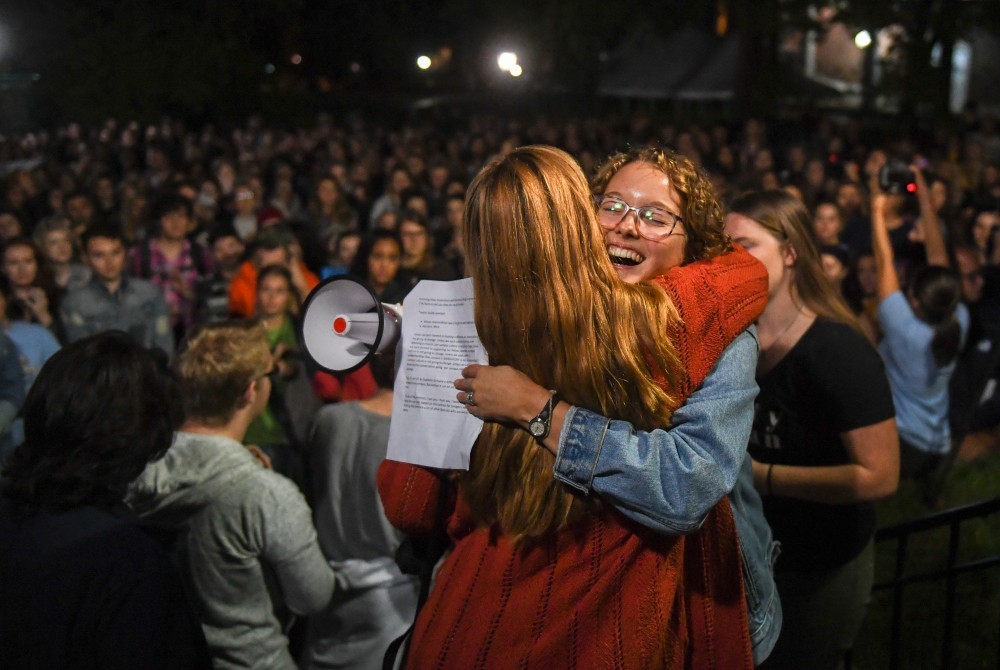 Mallory Golski embraces another protestor during the It's On Us Bobcats rally against sexual abuse on Sept. 27, 2018 outside Cutler Hall.

“It’s on Us, Bobcats” was a rally and march that took place in September as a call for an end to sexual assault on campus and to express support for sexual assault victims. There were about 500 students at the rally. At the time of the rally, there had been 15 reports of rape and sexual imposition.

The then-director of the LGBT Center, delfin bautista, was not renewed for their contract in January. bautista, who uses they/them pronouns and does not capitalize letters in their name, was put on administrative leave until June 30, according to a previous Post report.

After bautista was removed, about 60 students, faculty members and Athens residents gathered outside Cutler Hall. They protested, criticizing the university’s unexpected and hasty decision to remove bautista.

OU has selected an assistant director, but it will continue the search for a director in the fall.

Ohio University permanently expelled the Epsilon chapter of the Sigma Pi fraternity April 11 after an incident where a student was found unresponsive in an unofficial annex of the fraternity during the Fall Semester.

Collin Wiant, 18, of Dublin, a freshman and pledge of Sigma Pi Epsilon, was later pronounced dead at OhioHealth O’Bleness Hospital, according to a previous Post report.

A university hearing board found the fraternity in violation of endangerment, brutality, coerced consumption, coerced activities, destruction or damage to property, selling or distributing alcoholic beverages, allowing underage students to drink alcohol, unlawful use or possession of other controlled substances, physical harm or threat to a person and reckless action that poses a harm to others.

Sigma Pi appealed the hearing board’s decision but was denied. The fraternity petitioned it to the Vice President, where Vice President of Student Affairs, Jason Pina, denied the appeal.

Board of Trustees’ Decisions

During the October 2018 Board of Trustees meeting, the members discussed the new OHIO Honors Program. The program, which is an alternative to the Honors Tutorial College, is open to freshman of all majors and about 47 students had been accepted for the Fall 2019 pilot, according to a previous Post report.

In the January Board of Trustees meeting, members approved a 3.5 percent tuition increase for the 2020 fiscal year. A main reason for the about $200 increase was •low enrollment, according to a previous Post report.

In the March meetings, members approved the demolition and repurposing of several university houses and buildings at the Ridges. The Ridges project will cost $2.6 million, and the projects for the university houses could be as much as $1.9 million, according to a previous Post report.

Over the course of last school year, there were many new directors and deans introduced into the university. Here are a few of them:

Stephanie Williams was named the new director for Ohio University Press, which is the largest university press in Ohio. Her most recent position was director of marketing and sales at the University Press of Kentucky, according to a previous Post report.

Robin Oliver will serve as the vice president for University Communications and Marketing. Oliver was previously the chief marketing officer for Western Carolina University.

Mei Wei will serve as the new dean for the Russ College of Engineering and Technology. Wei’s former role was the assistant dean of Research and Graduate Education in the School of Engineering at the University of Connecticut, according to a previous Post report.

Neil Romansky will serve as the dean of University Libraries. Romansky previously worked as the associate chief librarian for Science Research and Information at University of Toronto Libraries.

During the November elections, incumbents retained their positions in Athens.

Athens County Commissioner Lenny Eliason, a Democrat, won his bid for re-election, receiving more than 65 percent of the vote. Eliason defeated his Republican opponent, Bill Hayes, according to a previous Post report.