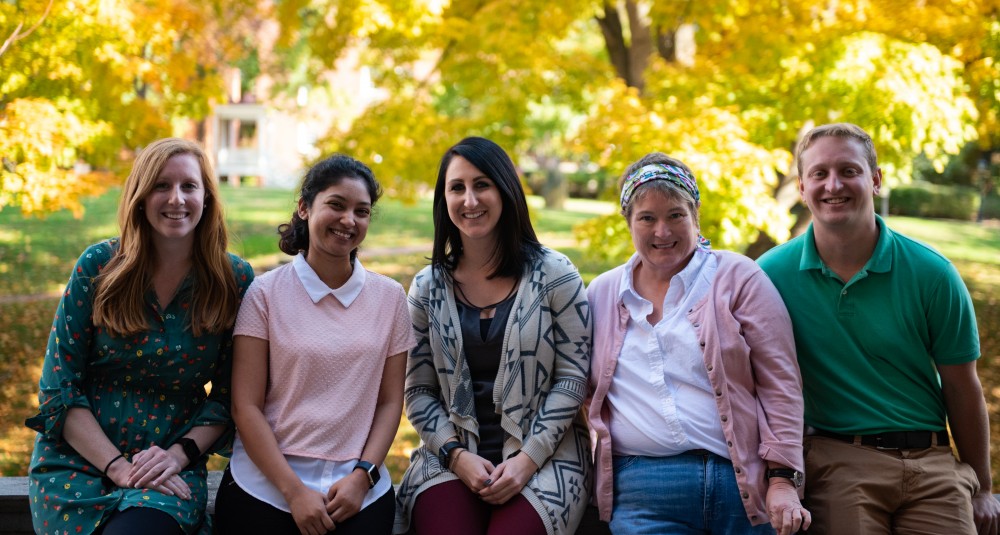 For most of the trial, the woman was nearly invisible. Friends, family and supporters packed the benches around her.

Throughout the four-day trial, the people around her did what they could. They passed tissues up to her when she cried on the witness stand. 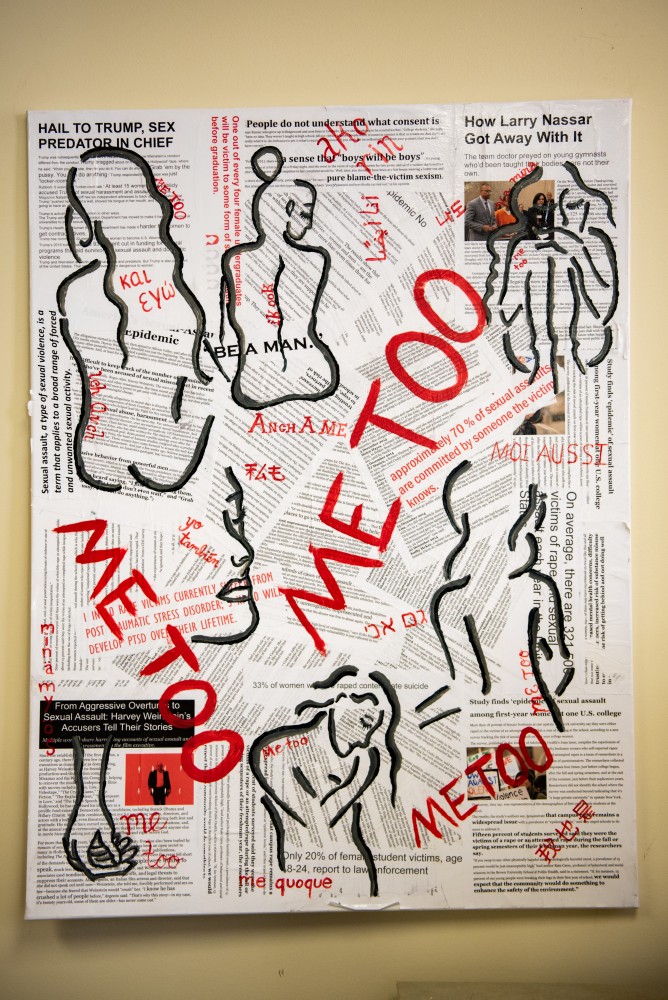 Artwork hangs in the office of the Survivor Advocacy Program.

Notay Jackson’s Feb. 22 rape conviction at that trial was a rarity. Police officials, prosecutors and journalists crowded the courtroom to watch it. Ohio University and Athens police field dozens of sexual assault reports each year, but have seen few convictions in recent years.

One of those convictions was Jackson’s. The survivor of that case has never been named publicly. The other survivor is Brie Sivy, an OU junior, whose assailant was sentenced to a year in jail after a year-and-a-half-long legal process. She has become an advocate for sexual assault survivors, helping organize events for the Start By Believing campaign on campus.

Sivy’s case was both a disappointment to her and one of local law enforcement’s greatest successes in recent years. Because the legal outcomes of sexual assault investigations are rarely favorable, survivors, advocates and police must find justice and closure in other ways.

From Brie Sivy’s assault to her attacker’s conviction, the legal process lasted longer than the prison sentence would.

Sivy spent nearly a year and three months describing the night of Oct. 2, 2016 to police and the prosecutor’s office. Devon Bowling, who was a OU freshman at the time and someone Sivy considered a friend, walked her home to her dorm room that night and sexually assaulted her in her bed. She reported it to police as rape, but Bowling took a plea deal and was sentenced to a year in prison for gross sexual imposition.

The length and breadth of a sexual assault investigation can vary. Most take at least three months, OUPD Detective Mathew Austin said. The process is time-consuming and forces survivors to relive their experiences again and again.

The process lasted for Sivy’s first three semesters, taking a toll on her grades and mental health.

“The first two semesters were terrible,” she said. “I pretty much hid in my room all the time and really focused on my mental health, which meant that my grades and schoolwork and social life kind of suffered.”

Sivy attended more hearings, meetings and interviews than she can count. During the early stages of the investigation, she said she spoke to police almost every other day. Sometimes she would leave class, rush down Court Street to meet with the prosecutor and hurry back to campus.

For every 1,000 people raped, only 310 report to the police, according to statistics from the Rape, Abuse and Incest National Network. Of those 310 people, only six will see their rapists go to jail.

Some sexual assault survivors end the process themselves when they learn what a trial might look like. Other times the prosecutor’s office chooses not to prosecute the perpetrator.

Out of dozens of cases Austin has investigated, Sivy’s case is the only to result in a conviction. He investigates reports of sexual assault and sends them to the prosecutor’s office, but has no control over whether that office chooses to press charges.

To deal with the low conviction rate, Austin has had to change his definition of a successful investigation. Instead of focusing on a conviction that likely won’t happen, he tries to restore as much control as possible to the survivor.

“Because how do you do the next (case) when you’ve spent six months interviewing the victim repeatedly, all of their friends, looking at all kinds of evidence, feeling like you have a strong case, and then …” he said. “It makes it hard the next day to start (a new case).”

One of the first steps in the investigation is what’s sometimes called “the long interview.” Austin calls it by its official name: the Forensic Experiential Trauma Interview. The technique bases questions on sensory details of the incident, which trauma survivors sometimes remember better than a chronological, linear narrative. 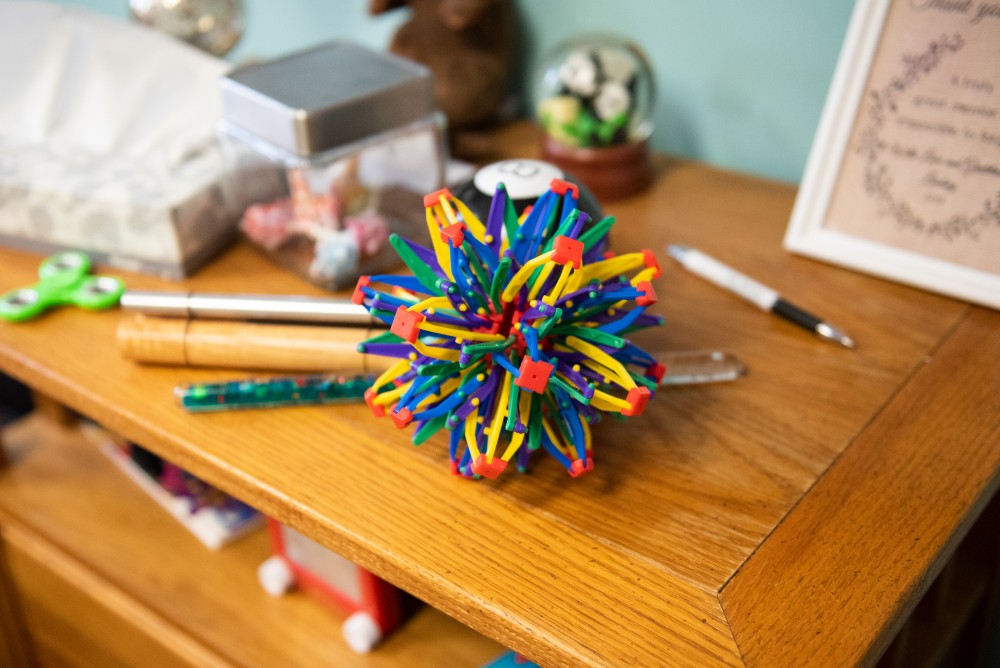 A ball used to help people breathe while they talk to members of SAP sits in the office of KC Waltz, an advocate in the program.


It also allows detectives to ask questions in ways that don’t sound as accusatory. Instead of asking, “Well, why didn’t you fight back?” a detective might ask, “What were you feeling when the attacker was on top of you?” prompting the same information without putting the survivor on the defensive.

Austin received training in those techniques within a month of interviewing Sivy. Before that, he said he likely had to ask the questions directly while trying to be as gentle as possible: “I’m sorry, I have to ask this because the jury will want to know — why didn’t you fight back?”

The long interview might last two and a half hours. Austin tells the survivor that they can take breaks at any point or decide to continue the interview on another day.

He’s also careful not to predict the outcome of the process or advise survivors whether or not to move forward. It’s impossible to know whether they will regret the process.

“I wish I had a crystal ball, because if in a month (they) feel this was more trouble than it was worth, I wish I could have told (them) that and just saved (them) the work,” he said. “But I don’t know, I don’t know that. Because maybe they’re glad they did it because yeah, it sucked, but it helped them move along better.”

The Survivor Advocacy Program (SAP) offices are in the basement level of Lindley Hall at the end of a silent, twisting hallway. Director Kim Castor said that’s by design. It allows people to enter discreetly, without being afraid anyone will see them. 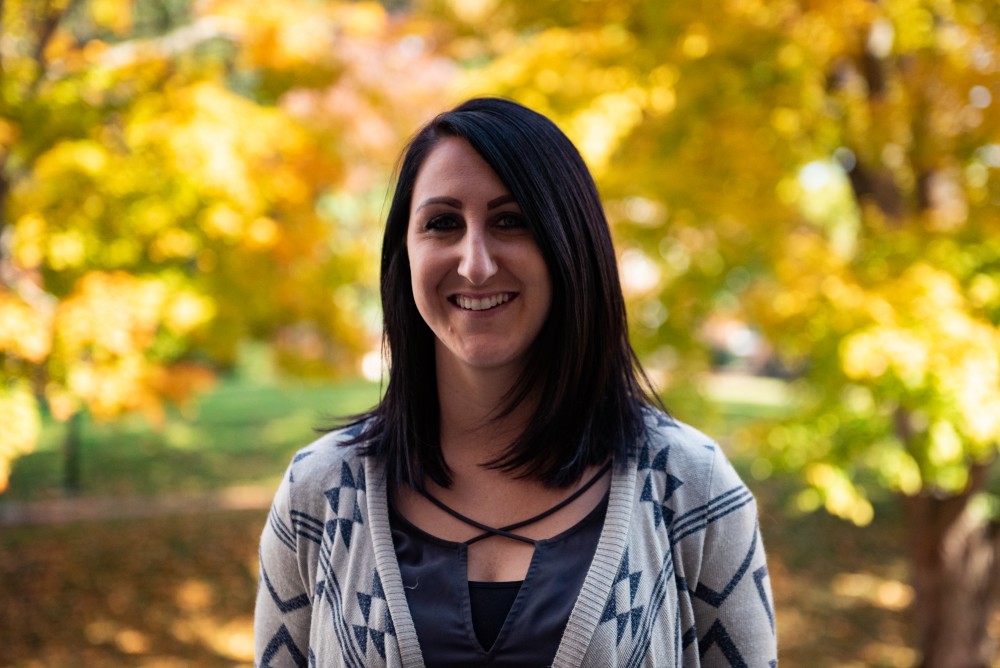 Kimberly Castor, the director of the Survivor Advocacy Program, poses for a headshot outside of Lindley Hall.

Castor works with two advocates and two graduate assistants. Everyone who works in the office is an OU alumnus or current student. Some of them have experiences at OU that motivated them to do their work.

As an undergraduate student, advocate Andrew Norris had male friends who were assaulted and didn’t know how to come forward or to get help. He wanted to be in a position to help people like them.

Graduate assistant Maeve Hinze saw the impact of sexual violence as an undergraduate and said she felt “powerless” to try to do anything to help. She learned about SAP when she came back for graduate school.

SAP provides many services, including confidential counseling for survivors and advocacy through both legal proceedings and the Office of Equity and Civil Rights Compliance process.

Castor served as Sivy’s advocate through the legal process. She briefed her before hearings, accompanied her and stepped in when Sivy needed to take breaks.

Sometimes the advocates help in small ways. Castor likes to put lavender essential oil on tissues for a soothing smell, and Norris provides Kinetic Sand for survivors to fidget with. The office stocks weighted blankets for anxiety relief.

SAP never contacts survivors — survivors always initiate services themselves. That allows them to maintain control over their recovery and only receive the services they want. SAP advocates were not involved in the Notay Jackson trial, for example.

And for the same reason, the advocates don’t ask questions during sessions, just listen. They never ask survivors to describe their assaults. They might hear the full story for the first time at a hearing or sexual assault exam.

Working with survivors is an emotionally draining experience that can cause secondary traumatic stress, a condition that mimics the post-traumatic stress disorder that firsthand trauma survivors experience. To reduce the effects of their work, advocates set boundaries. They don’t answer emails after work, and when they talk to each other after hours they stick to topics unrelated to their jobs.

“We’re naturally empathic people, and for us to say ‘We’re setting a boundary to turn our empathy off, I’m not really sure it works that way,’” Norris said. “But you can set boundaries and put things into practice about the emails, about the text messages, about the days off.”

Though Sivy knows she was lucky to see any conviction at all, she wishes she fought harder for the Athens County Prosecutor to prosecute Bowling for rape instead of sexual assault. If Bowling had been convicted of rape, he could have faced up to 11 years in prison.

As the case was winding down, she started finding ways to better balance the legal proceedings with her school work. She also switched her major from nursing to social work. Having experience with trauma herself, she hopes to work in trauma rehabilitation.

“I got linked up with all these social workers who were absolutely amazing people and I was like, ‘Well, I want to be one of these amazing people one day and help people the way that they do,’” she said. “(Castor) was a lot of my influence, I won’t lie. It’s going to go straight to her head when she hears it ... but she is an amazing person.”

“It's heartbreaking to have so many people close to me who have been assaulted or (assaulted multiple times) and then having these people come up to me who I don't even know who are disclosing to me. I love that they feel that they can trust me enough for that ... but it's just so heartbreaking how prevalent it is.”Brie Sivy

Recent current events such as the sexual assaults on campus or the nomination of Supreme Court Justice Brett Kavanaugh have hardened Sivy’s resolve to speak up for survivors who aren’t yet comfortable speaking up for themselves.

Since her sexual assault, Sivy has had friends tell her about their own experiences. She talks them through it and tries to relieve some of the shame they feel — when they blame themselves for the assaults, she asks if they would blame her for hers, which tends to snap them out of it.

People also tend to approach Sivy after campus events and share their own sexual assault experiences.

“It's heartbreaking to have so many people close to me who have been assaulted or (assaulted multiple times) and then having these people come up to me who I don't even know who are disclosing to me," she said. "I love that they feel that they can trust me enough for that ... but it's just so heartbreaking how prevalent it is."

Correction: This story has been updated to remove information about a case the Survivor Advocacy Program was not involved with.