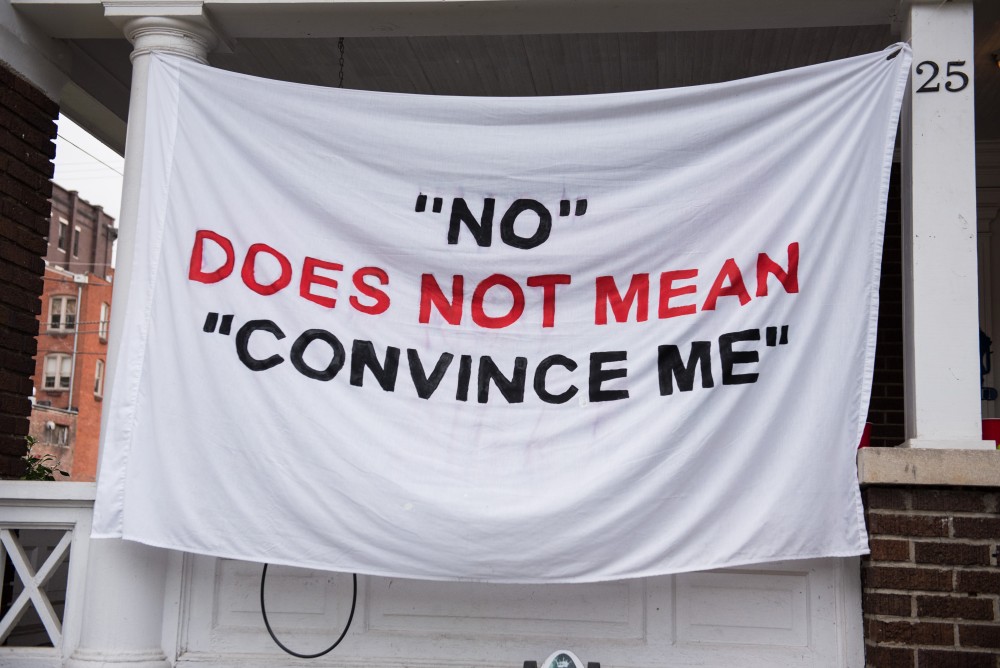 Eight sexual assaults have been reported since the Fall Semester started. Now OU students are saying enough is enough.

Whether you talk to police officers, university administrators or students, the message is the same: The campus culture needs to change.

“In our community, we will not tolerate such behavior. Not today. Not tomorrow. Not ever,” OU President Duane Nellis said in a statement.

Students are reacting more vocally than they have before, taking to social media, hanging banners calling for an end to rape culture and advocating for changes on the university level.

While changes are being made, some groups believe students need to take it upon themselves to make change happen. 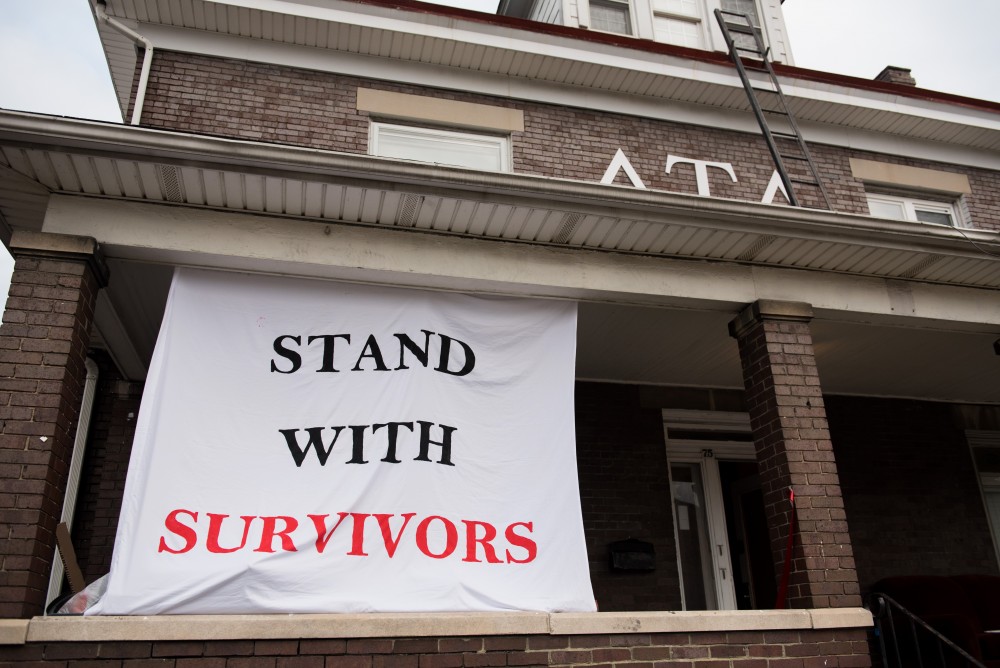 
“This shouldn’t still be happening at this day and age,” OUPD Chief Andrew Powers said. “The energy that it takes to be mad about it and to be mad at the police about it is energy that could be focused on finding community solutions, on having conversations, on working together to change the culture.”

OUPD, APD and Student Senate all believe there are steps students can take that require community and peer-to-peer engagement to change the culture. That starts with speaking up and stepping in to address words and actions that promote rape culture.

“It’s much more powerful when a peer, who you respect as a peer, has something negatively to say about what you’re doing,” Powers said.

In the majority of cases reported, the perpetrator is someone the victim knows, such as a friend or acquaintance. Powers said that does not mean students should not trust their friends. Instead, it means that everybody on campus needs to realize they have an obligation to understand the definitions of consent and rape.

In most cases investigated, perpetrators didn’t think they had committed rape, which is no excuse and only adds to the problem, Powers said. 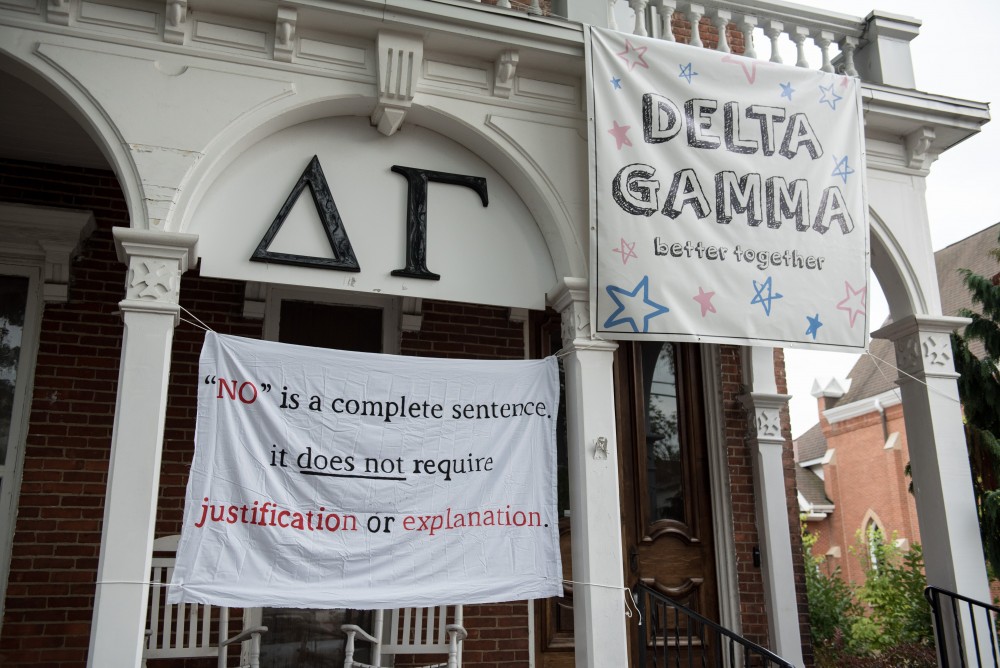 
APD Police Chief Tom Pyle thinks it is time to address perpetrators directly. That would mean speaking out against rape culture and making changes, such as not hanging vulgar banners on houses during welcome weekend, he said.

That statement added that faculty members and local residents had expressed concern about the banners appearing year after year. The university emphasized that the banners go against OU values and warned of the impact words can have on everyone, especially survivors of sexual assault.

In response to the recent reports, student organizations have shown support for survivors by addressing the issues in various ways.

Members of some of OU’s sororities and fraternities have hung signs on their chapter houses to protest rape culture and express support for sexual assault survivors. Some messages include “Stand with survivors” and “Yes means yes, no means no. Whatever we wear, wherever we go.”

Mary Ryznar, a senior studying communication studies and integrated media, started a GroupMe chat after one night out with her friends when they talked to other women about the recent reports.

“Every girl that came up to our table said how scared they were and how screwed up the situation was,” Ryznar said.

Within 30 minutes of starting the GroupMe chat, there were 500 members, which is the limit for group sizes. After requesting the member limit be expanded, the GroupMe quickly reached 1,000 members. 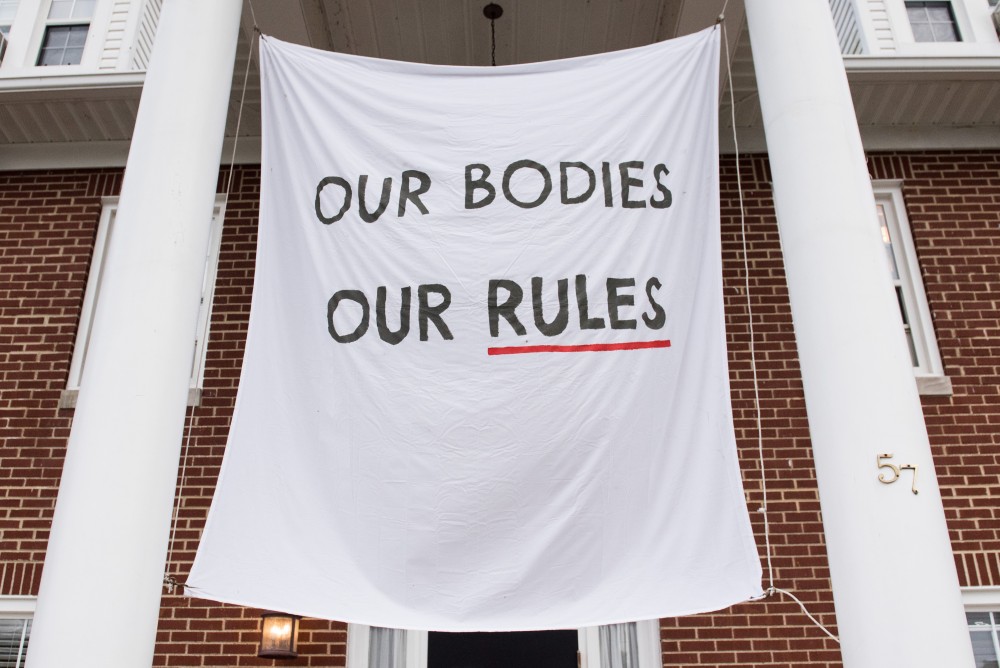 
The GroupMe is meant to be a resource for women on campus to express concerns, warn each other about possibly dangerous situations or people, and ask for someone to walk them home if they don’t feel safe, Ryznar said. The group is also available for anyone who has been a victim of rape or sexual assault.

Members of the group chat are trying to meet up in the next few weeks to discuss safety precautions that can be taken on campus. Ryznar said she believes Court Street should be a safe place so women can actually enjoy going out to local bars.

Ryznar, who is a bartender at The Over Hang, 63 N. Court St., said the bar has made a point to be a safe space for women and to encourage women to ask staff for help if they feel like they are in an unsafe situation.

The Over Hang’s bartenders are required to be completely sober for their shifts. They are also willing to give people rides or walk them home if they do not feel safe, Ryznar said.

Student Senate President Maddie Sloat said she hopes to use the reaction from students to make changes on campus that would make them feel safe as they walk around campus at night and give them options if they are in a potentially dangerous situation.

“A lot of students are reaching out with concerns,” Sloat said. “It’s an interesting aspect because we are also students. We have members in our body. We are all women as well and feel unsafe.”

Student Senate will hold an open forum Sept. 13 in the Front Room Coffeehouse from 3-8 p.m. to allow students to express their concerns, give feedback and talk about ideas for change. Some of those ideas are already in the works.

First, Student Senate is looking into the ride services offered by the university to see how they can be improved. 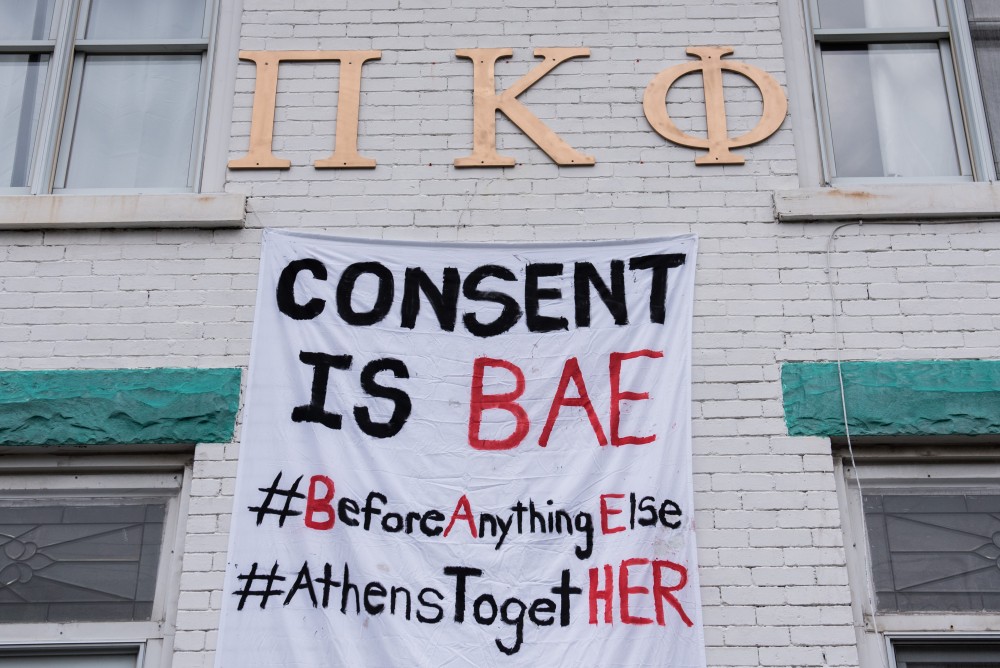 
CATS Late Night is a free shuttle service students can request any day except Sunday. However, students have expressed concern that shuttles can take a long time to arrive or, in some cases, don’t show up at all. Members of Student Senate don’t want that to be the only option for students if they are in a potentially dangerous situation and need a ride quickly.

“We shouldn’t give that as a resource for students if we are not able to follow up on it and say that it’s useful and that it’s going to be safe for you,” Sloat said.

Sloat said Senate also wants to make an app available to students that could help them if they are in a potentially dangerous situation. Senate members are working to narrow the options down to three. At the open forum, the apps and their potential features will be presented to students, who can vote on which one they would want to be made available.

Sloat said Student Senate wants an app that will be easy to use, be able to be concealed if necessary, and have location tracking, texting and calling functions. The app will also include contact information for the Survivor Advocacy Program (SAP), Counseling and Psychological Services and OUPD. 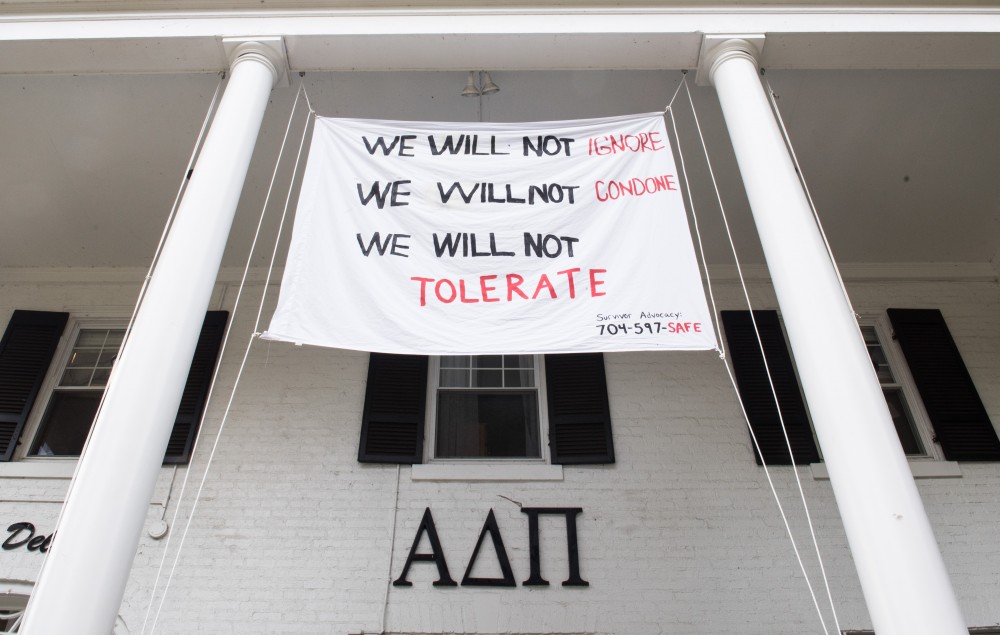 
Student Senate is also talking to university administrators about improving lighting on campus, particularly in areas such as the stairs by Bryan Hall on East Green and in the back of South Green.

Sloat said Student Senate has been working for years to improve lighting on campus, but no additional lighting has been put up. Senate is evaluating its options and, even if new lights can’t be installed on campus, members want to install lights with better wattage so that they are brighter.

However, Student Senate, along with APD and OUPD, has acknowledged better lighting does not make for a safer campus or lead to fewer assaults.

“The lighting issue … it’s certainly something that can help prevent a future incident,” Pyle said. “But you run the risk of creating an image in the public’s mind that a vast majority of these are occurring by unknown persons, by men in ski masks hiding behind the dumpster in the dark alley, and the fact is that it’s statistically the anomaly for that to occur.”

Most of the reports from this year have happened in residence halls or private residences, well out of view of APD and OUPD’s patrols.

“The reality is most of these assaults are happening in places that we can’t prevent them,” Powers said.

In an effort to help ensure student safety, APD and OUPD have both increased and changed patrol routes, with OUPD refocusing its patrols around Mill Street. 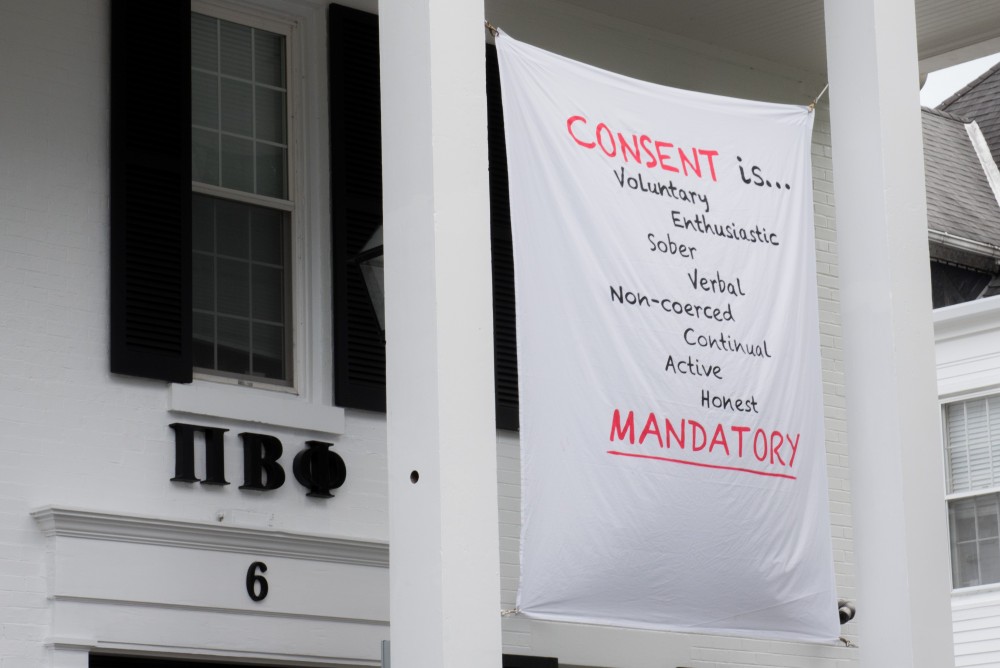 An OUPD crime alert was sent to OU students Aug. 31 and reported a rape had occurred in an unknown residence hall between Crawford Hall and Mill Street either late Aug. 25 or early Aug. 26. The case was reported by a third party since the victim wished to remain anonymous. Due to the anonymous nature of the report, OUPD was unable to investigate the case further.

Another crime alert was sent to students Sept. 3 after OUPD received a report of a kidnapping and rape that occurred Sept. 1. A woman was forced into a vehicle on Grosvenor Street and driven to her residence in Wray House and raped. That case is under investigation. 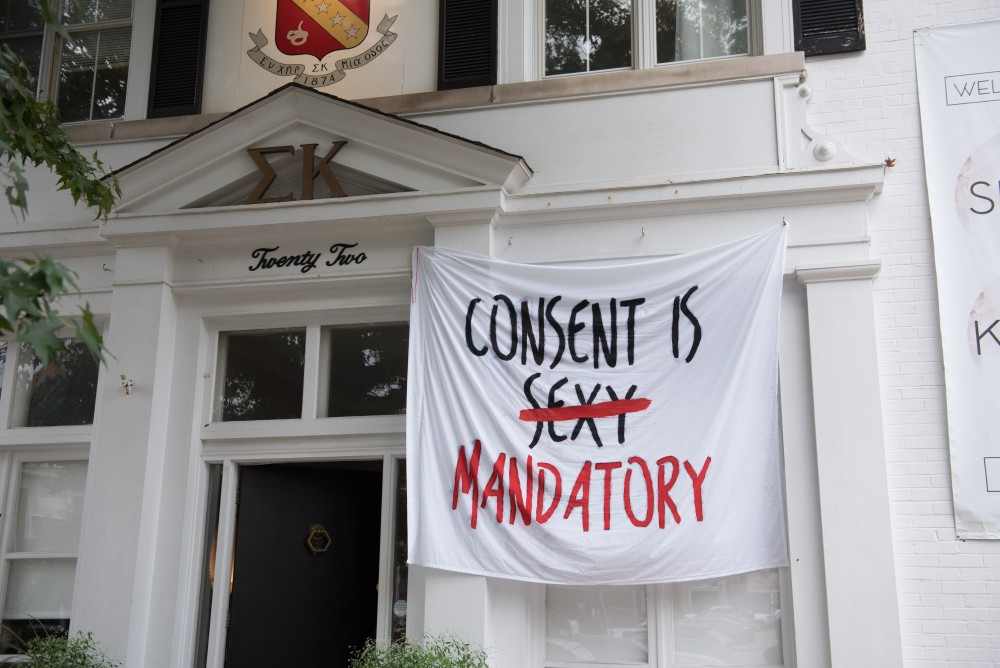 
On Sept. 5, a third crime alert was sent to students of a rape reported to have occured in an unknown residence hall. The report was anonymous, so OUPD was unable to investigate that case further. That same day, APD received a report of a rape that occurred Aug. 25 on the east side of Athens. The alleged perpetrator in that case was known to the victim, and that investigation is ongoing, according to the report.

APD also received a report of rape that occurred on the west side of the city Sept. 8. That case is under investigation.

On Sept. 11, APD received its third rape report form OhioHealth O’Bleness Hospital that occurred in an apartment on the south side of Athens. The woman is still deciding if she wants to pursue an investigation.

The department has also received two reports of sexual imposition, which occurred Sept. 4 and Sept. 7.

After three cases of rape were reported, Pyle and Powers released a joint statement. In their statement, the departments said they were working together on investigations, increasing patrols and encouraging student engagement to address rape culture. 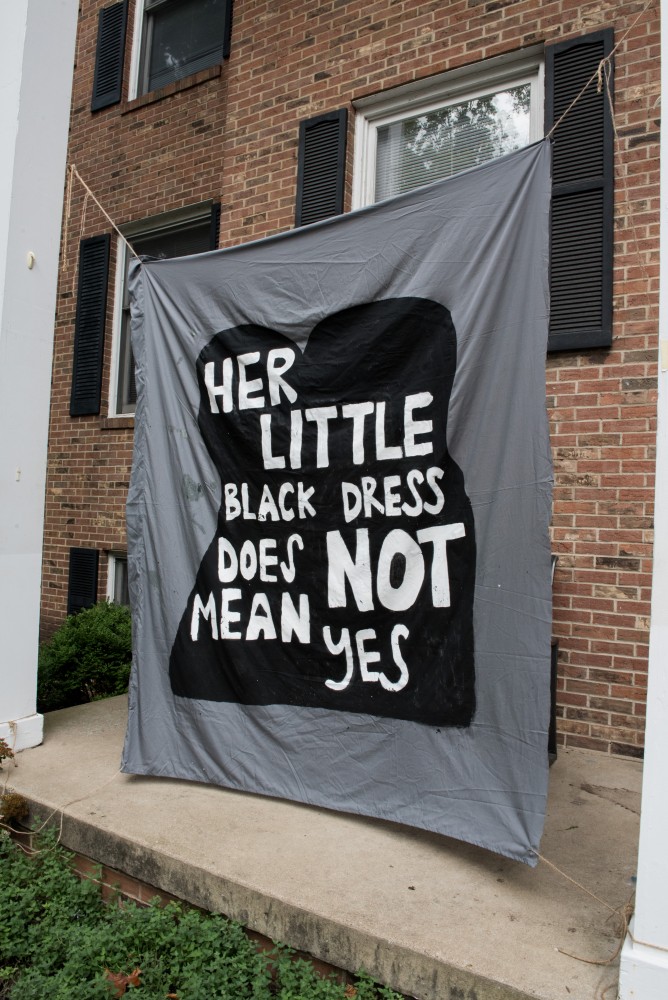 All OUPD detectives are Forensic Experiential Trauma Interview, or FETI, trained. FETI is an investigation technique with a victim-centered approach. OUPD also makes a note at the bottom of crime alerts stating that survivors of sexual assault are never at fault and that the perpetrators are the ones who are responsible for their actions.

OUPD worked with SAP and the Women’s Center to change the resources section in crime alerts to be more survivor-centric and to avoid victim blaming. OUPD also plans to promote more Rape Aggression Defense classes, which teach realistic self-defense tactics and techniques.

SAP is also working with CPS to host workshops for female, male and non-binary survivors. The Women’s Center and other campus partners provide ongoing programming that focuses on survivors.

APD has also changed the way it accepts sexual assault reports. Pyle said the department informs survivors of all their options and accepts the notion that survivors may want to file an anonymous complaint and not go through with an investigation.

“I’m hoping that the student response has an impact,” Pyle said. “One more of these cases is too many. It would make me very happy for us to not have any more of these people to be victimized.”