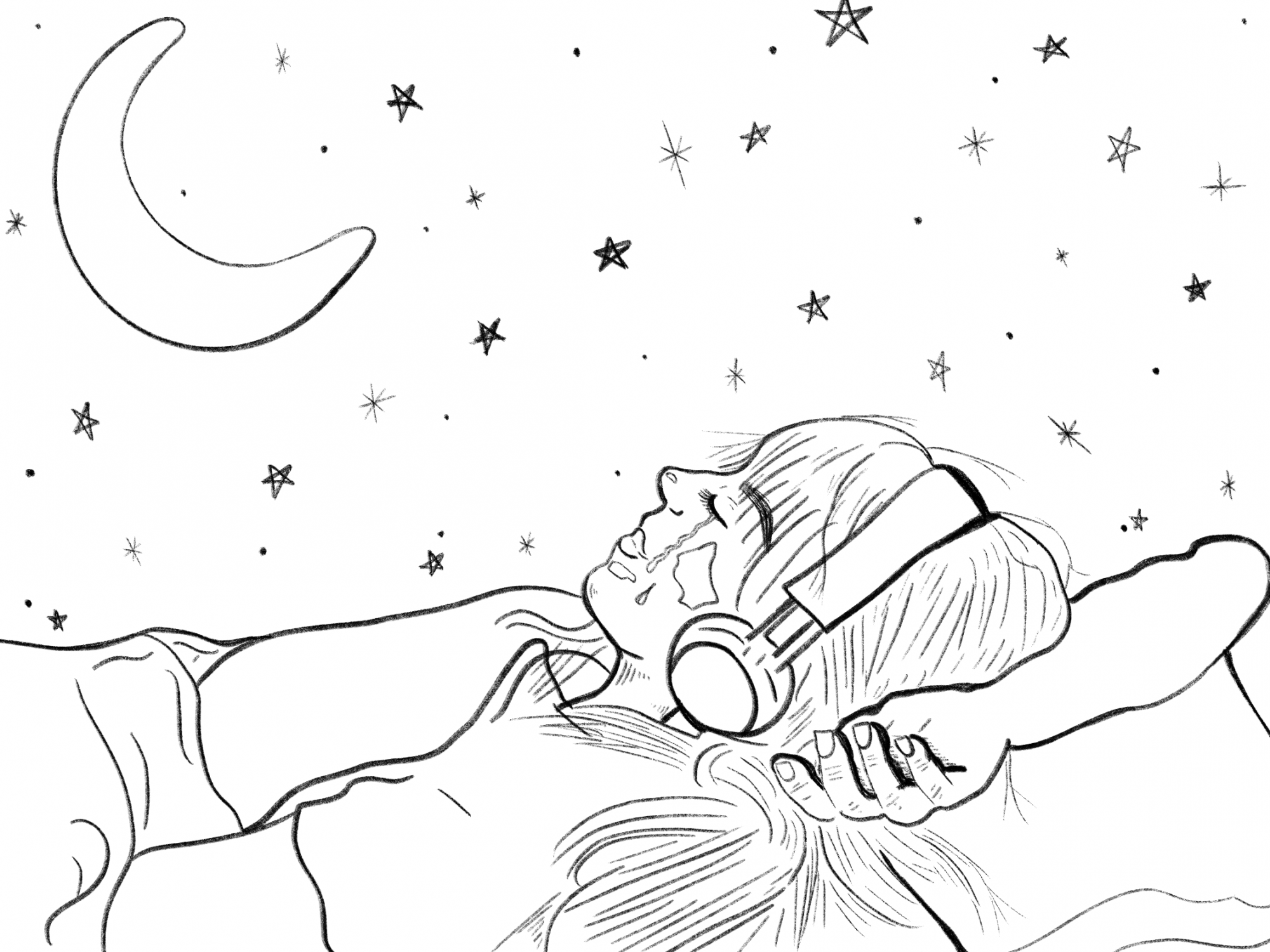 Listening to sad music after a long, rough day. Illustration by Olivia Juenger.

The Solace of Sad Music

When Emily Squance and her roommate first met, they were deeply homesick, so they blasted “July” by Noah Cyrus and watched the weight of the world fall from their shoulders and turn to dust.

Squance, a junior studying strategic communication, said the two of them bonded over that shared melancholia, and Cyrus’ sad, pain-tinged words helped them forge a connection.

Sometimes, sad music makes the tough moments a little easier. Some think that’s counterintuitive, and others know it as a remedy that never fails.

Kimberlea Czulewicz, a senior studying psychology, falls between those two mindsets. She always pulls up “Ultimately” by khai dreams, which is brimming with self-doubt and tells the story of love in limbo, when she’s smothered by a wave of dejection. While she doesn’t know why she likes listening to sad music — she admits it’s a toss-up as to whether it ends up making her feel better — she finds comfort in knowing she’s not by herself in feeling this way.

“I have depression and anxiety just like a lot of other people,” Czulewicz said. “I think it just makes me feel a lot less alone, like I’m not the only person that’s sad a lot.”

Mindsets like Czulewicz’s aren’t out of the ordinary, Andrew Holbrook, an assistant professor of music therapy at Ohio University, said. He said there is no uniform reason why people listen to sad music if they know it’s not guaranteed to lift their spirits, but that’s also the beauty of it: It resonates in lots of ways for lots of different people. Just like some people listen to songs for production while others value lyrics, music affects one person diversely from the next.

Holbrook added that while people may immerse themselves in sad music and see no immediate improvement in their mood, they shouldn’t be discouraged.

“Even though they may not feel better right away, I think that in the long run, it does help,” Holbrook said. 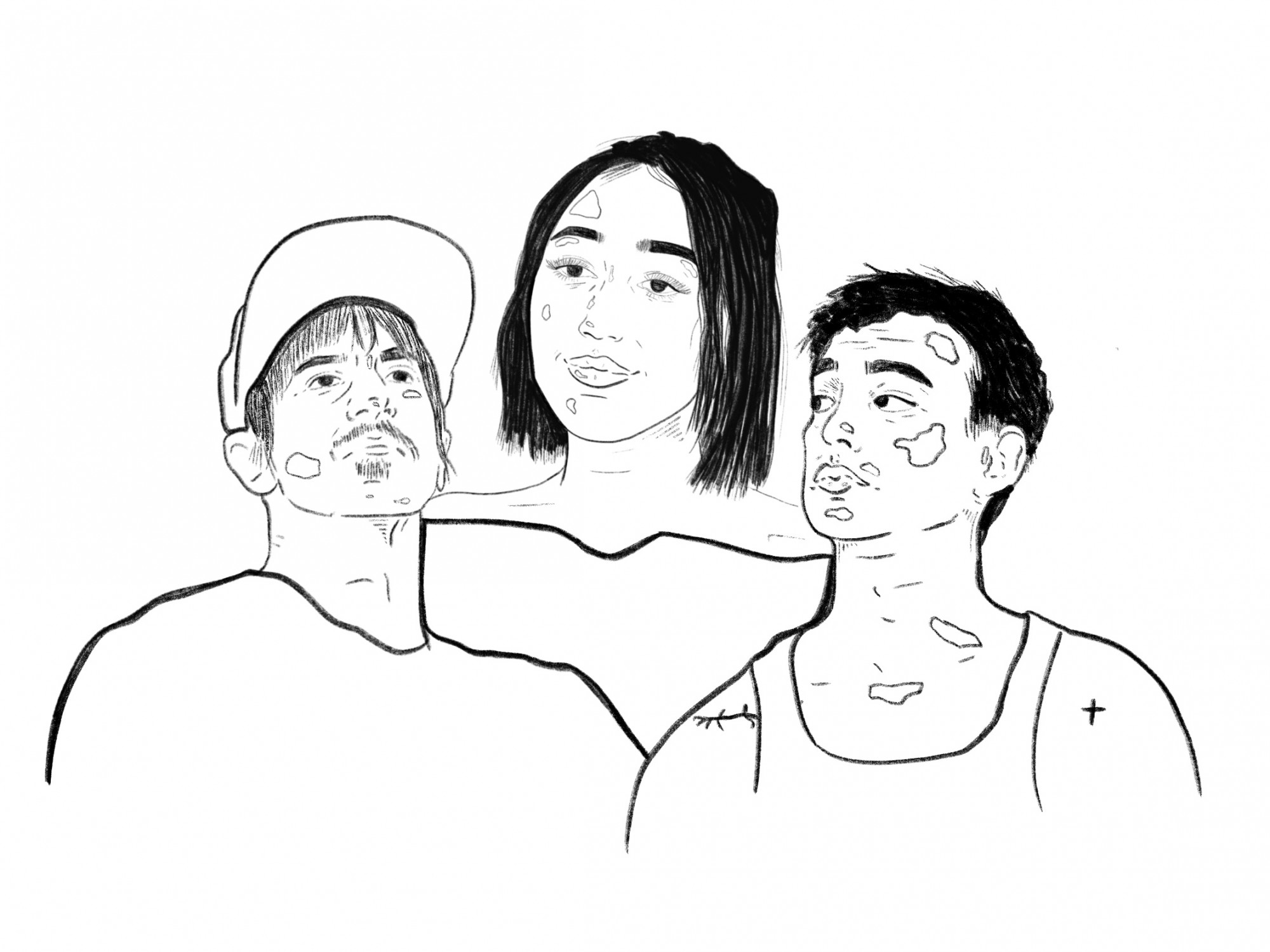 Listening to music can also be comparative to commiserating with someone, Holbrook said. Just like that exchange of sympathy and comfort, which often includes cathartic moments, music can offer a similar type of relief.

Catharsis is an aura cleanser that Preston Lynch, a senior studying music production and the recording industry, knows well. Lynch, who makes music under the moniker Peat Lynch, just released his hip-hop album Rain or Shine in November. He said the saddest song he’s ever written, “because i love you,” appears on it.

The track, ripe with sorrowful keys and gutting lyrics about cutting ties with a long-term partner when feelings are still there, was something Lynch felt he had to write.

“A lot of times, I don’t even have a choice (as to) what kind of music I make,” Lynch said. “It just comes out, especially if it’s something heavy like that.”

Not only does music help Lynch express himself, but he finds sad music repairs his mood. Though he’s recently spun a host of artists, including Kendrick Lamar and The Zombies, Lynch has found himself leaning on The Red Hot Chili Peppers not only for subconscious inspiration but also because it currently seems to fit the soundtrack of his life.

Lynch’s favorite Chili Peppers song is one of its more slow-paced and thought-provoking: “Dosed.” He said listening to sad music boosts his mood, but he knows it’s not like that for everyone. He said whatever music feels right in the moment should always be pursued.

For Annie Fink, a senior studying music production and the recording industry, her choice of sad music is the stylings of Joji — specifically, his song “Ew.” She said she feels emotionally connected to him and other relatable artists like Billie Eilish who create sad music because knowing that someone else has experienced the same type of pain can lead to healing, but she doesn’t think consuming sad music frequently is healthy.

“If that’s all you’re listening to all the time, I feel like your body and your mind is just going to latch onto that and instantly take on the emotions that you might not be feeling just because you’re so used to it. I feel like that can really just enclose you in a space that you don’t want to be in.” —Annie Fink, a senior studying music production and the recording industry

Fink recommends taking sad music in small doses and instead diversifying listening patterns, but if someone needs to sit with their emotions for a minute, they shouldn’t hesitate to reach for what they need.

This phenomenon of fans being emotionally connected to artists they’ve never personally met isn’t something that artists typically keep in mind when creating their music, Josh Antonuccio, director of OU’s School of Media Arts & Studies, said. Antonuccio, a producer himself and owner of 3 Elliott Studio in Athens, said most of the thought process goes into channeling what the artist specifically wants to delineate through their work. However, if they’ve created something that’s hitting them hard, he said they never doubt that it’s going to touch the listener in the same way.

It’s different when it comes to why artists create the music they do, though, Antonuccio said. They might consider how it will sound or feel in a live capacity or how it will impact a certain market.

Moments like that from country outfit Jason Isbell and the 400 Unit have reached Emily Marlow, a sophomore studying communication studies. Though Isbell makes country music, a genre Marlow doesn’t listen to otherwise, his poetic lyrics have stayed with her, especially those from the track “If We Were Vampires.”

“That song in specific … it’s sad in a way that is beautiful,” Marlow said. “It makes you focus more on realizing that life is short rather than ‘I’m sick of today and yesterday.’ I think a lot of times it shows you a different perspective.”

Though she said sad music undoubtedly makes her feel better, Marlow echoes Fink’s sentiments that it shouldn’t be gorged. If it can help someone block out distressing feelings, then it can be a great tool and should be used, but if someone doesn’t read the room and chooses to self-inflict that pain, she said that’s not a viable way to take care of oneself.

Diamond Allen, a senior studying women’s, gender and sexuality studies, thinks how much sad music should be digested depends on the person. She recognizes sad music mends the scrapes right off some and deepens the wound for others, but like Fink said, whatever works for someone is always OK.

Allen tends to gravitate toward “Mockingbird” by Eminem when she’s sad, even though she can’t exactly relate to his words. She likes that even though they’re not going through the same experiences, he emulates the same type of passion stewing in her soul.

“You can feel his emotion in his songs,” Allen said.

“Sometimes, I can’t articulate how I’m feeling, so I will just use a song so I can get it out as best I can.” —Diamond Allen, a senior studying women’s, gender and sexuality studies

She’s curated a slew of playlists that each encapsulate the emotions she can’t express herself, and she plays them when needed.

However, when a sad playlist isn’t the answer, Holbrook recommends working with a music therapist. A method they often implement with clients is the “iso principle,” which is started by playing music that aligns with the client’s present mood. If they have depression, sad music may be used.

“We try to get them to entrain with music,” Holbrook said. “When they start really resonating, really feeling that music, then we might progressively move to a different place: might be more relaxing or soothing or more upbeat or up-tempo kinds of things. If we truly have entrainment, then their mood will move with the music.”

Holbrook recommends music therapy for those of all ages with a mental health disability, especially if music is a mainstay in their life.

Though Squance recognizes the importance that “July” served for her and her roommate, she knows constantly listening to sad music may reinforce unsought feelings, but sometimes, she needs the vulnerability of Cyrus and others injected into her veins. 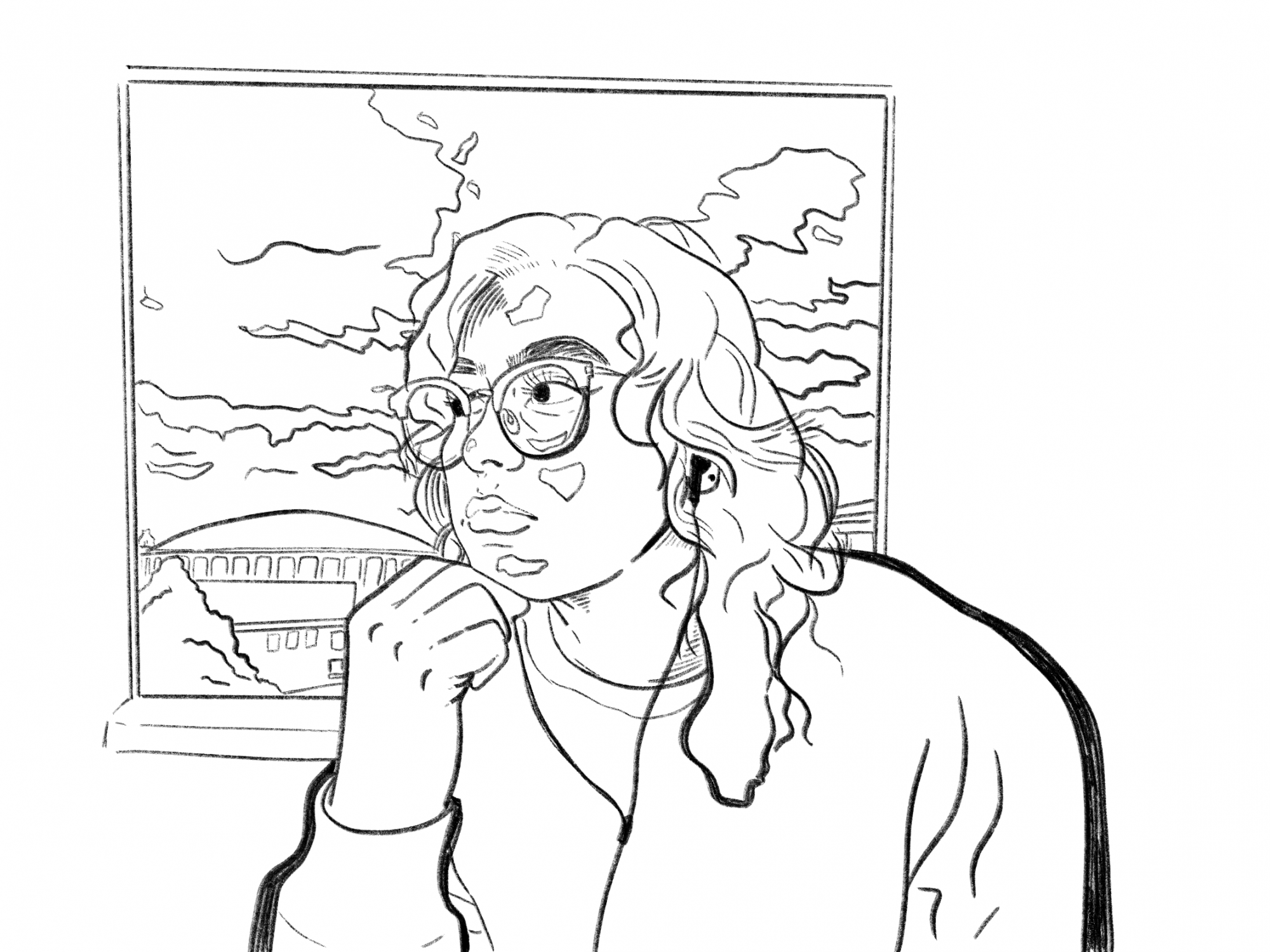 Listening and thinking as the day goes by

“I feel like there’s a special sensitivity to sad music,” Squance said. “It just lets you feel those emotions, and I’ve always been an advocate of feeling what you need to feel and not pushing anything down, and I feel like these sad songs help.”

To listen to all the songs mentioned in this story, click here.