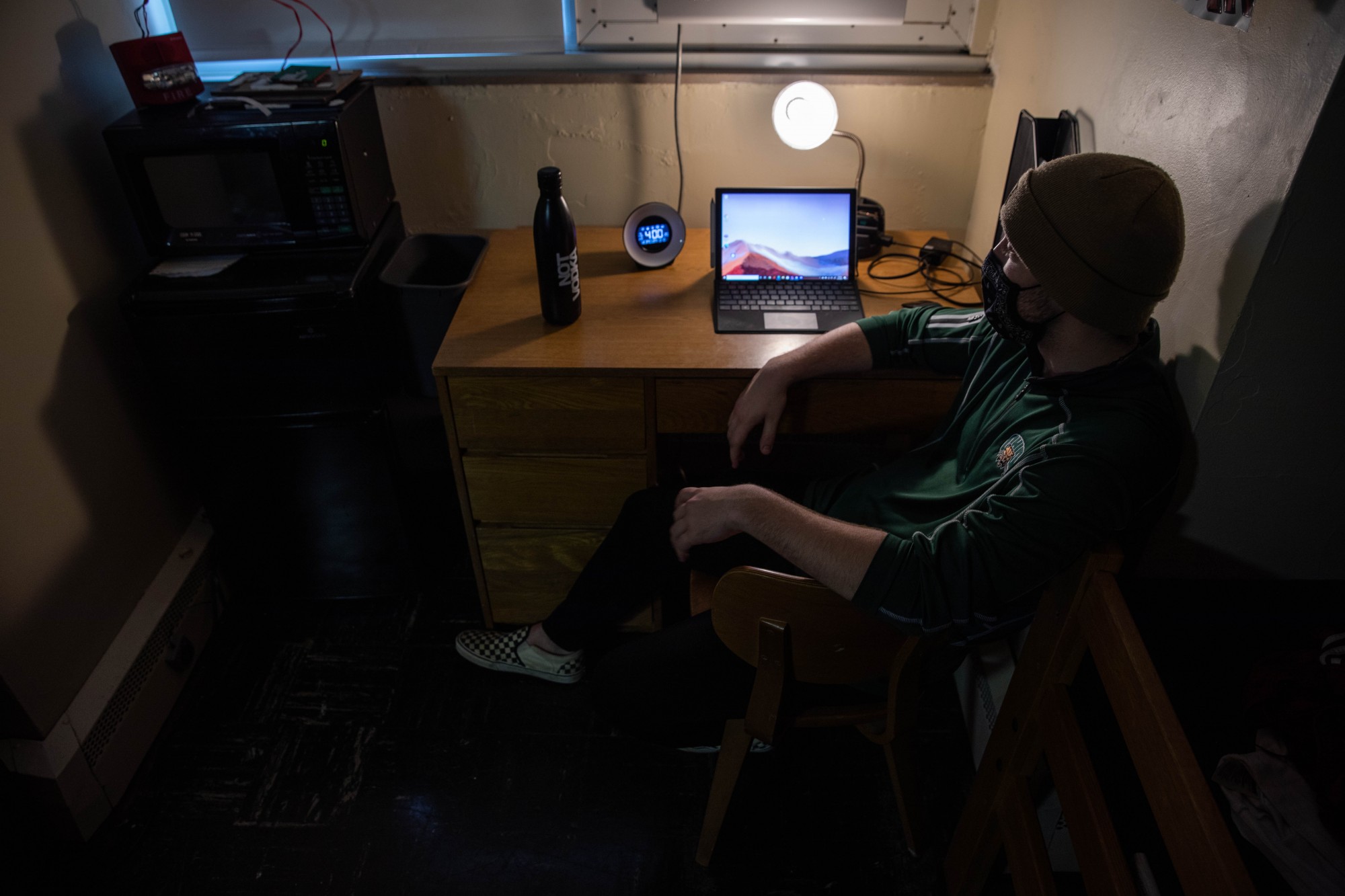 Gray, now a full-time student living on campus for spring semester at Ohio University, must safely navigate Athens as it marks another week in the red zone with its COVID-19 cases.

Living Up to Expectations

C ollege sits at the forefront of the American coming-of-age experience, with its traditional first-time experiences: moving away from home, meeting friends, trying new cuisine, all-nighters, dates and more.

But in the state of the pandemic with cases in Athens and around the country still on the rise, the experience of moving away to college for the first time has become even more complex. Over 3,000 students returned to live on Ohio University’s campus, some of whom moved into a dorm for the first time. Some of these students have enjoyed their first few weeks on a pandemic-plagued campus, while others felt it hadn’t yet lived up to their expectations.

Gray prefers to learn in person, he said, and, along with many other students, he came to campus with the expectation of having at least one in-person course. His in-person class got switched online at the last minute, Gray said, but just being away from the distractions of home has helped him with his academic endeavors.

“I've been taking all my classes from my room, but the thing that's really changed is just the mindset. I have a lot less distraction,” Gray said.

Danny Gray adjusts his mask, taking a small break from checking his e-mails while in his dorm room in Tiffin Hall on Wednesday, Feb. 10, 2021. 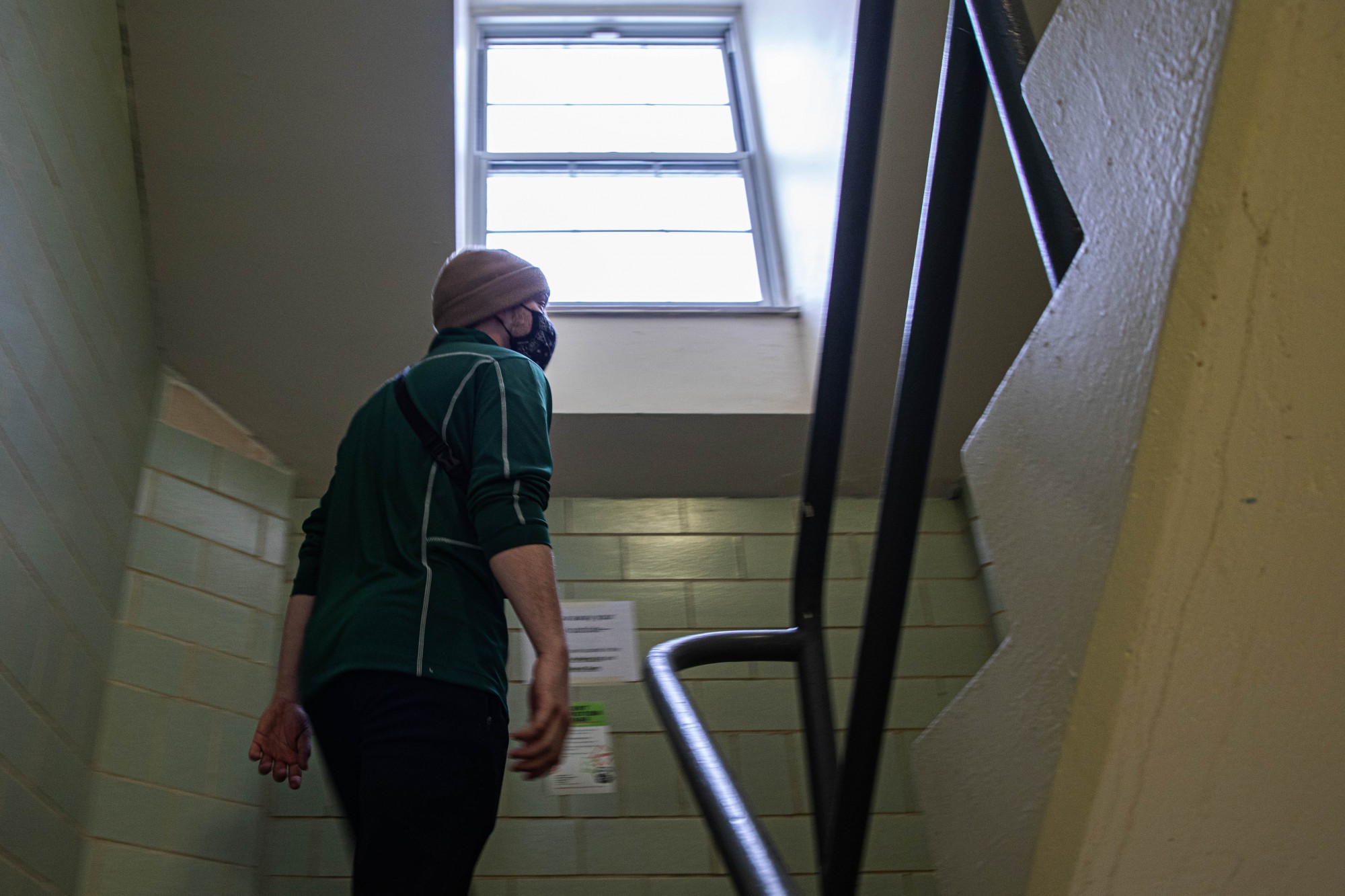 Danny Gray winds up multiple flights of stairs to reach his dorm room on the fourth floor of Tiffin Hall on Wednesday, Feb. 10, 2021. Gray is a freshman at Ohio University living on campus after students were allowed back for spring semester.

Meeting new friends has been different because of COVID-19 protocols, but Gray said he met many of his friends through social media on “Class of 2024” pages, where people post a little snippet about themselves, some photos and contact information, typically Snapchats. He said he has met even more people because of those friends.

“It’s turned me into a little bit of a more of a social butterfly than I thought I'd be,” Grey said. “I've met a lot of really cool people that I hope I can call friends through the next three-and-a-half years.”

Still adjusting to unusual dorm life on campus, Danny Gray keeps his suitcase out next to his bed just in case. 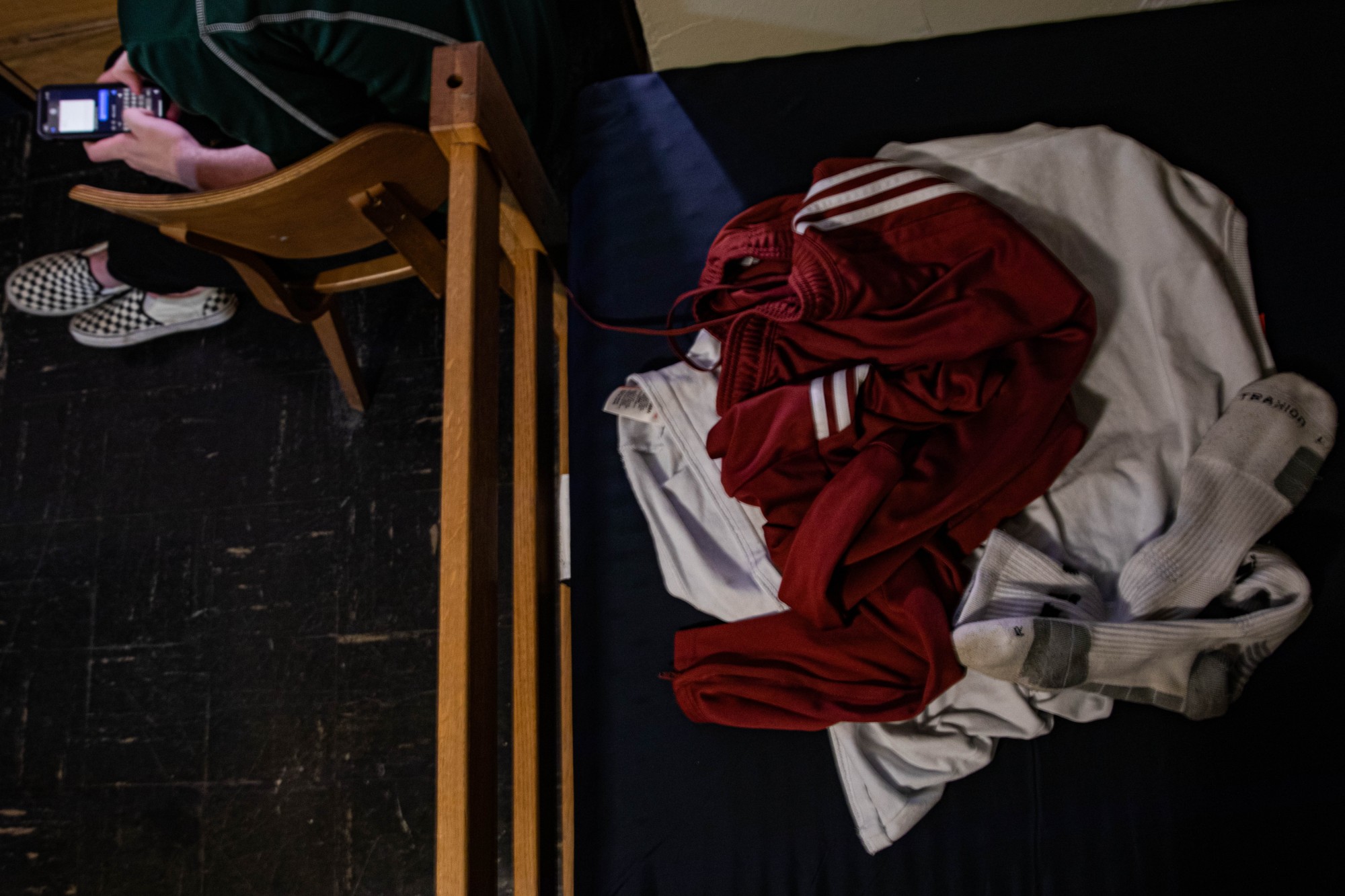 Laundry is left on an empty bed in Danny Gray's dorm in Tiffin Hall. Gray's roommate has not moved in and decided to stay back, not wanting to move in just for all his classes to be online.

Even his sleep schedule has improved since he moved to Athens. Because of his insomnia, Gray struggled to sleep at home in his own bed but said he feels a sense of comfort here in Athens that puts him at ease.

“I've been able to kind of process and realize that if you can sleep well here, there are going to be a lot of other things you'll be comfortable with,” Gray said. “I've just been trying to explore that, and even just walking around, it does feel like home.”

Because his roommate and longtime friend decided not to come to campus for the spring, Gray lives alone in a double-occupancy room on East Green, with barely any other residents on his floor, making it even easier to stay safe from COVID-19. 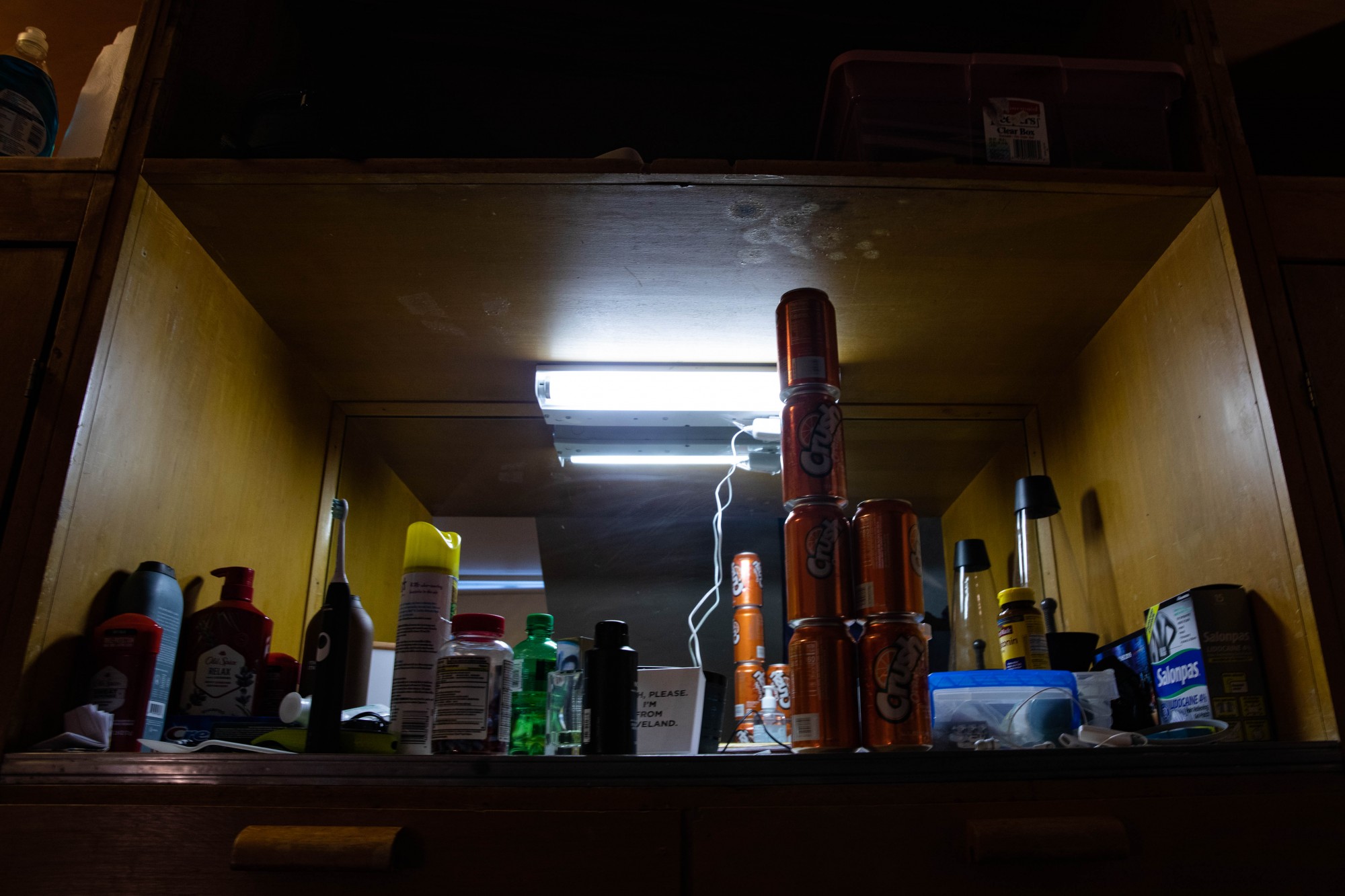 A tower of Crush soda cans stand stacked among a shelf full of freshman Danny Gray's toiletries in his dorm room that, while it was supposed to be a double, is currently a single with his would-be roommate deciding to hold back on moving to Ohio University's campus.

Blalock also has a room to himself on East Green, but he has found his experience to be not as satisfying socially.

“I was expecting a little bit more, I don't know, interaction, I guess,” Blalock said, “I still thought there'd still be interactions ‘down the hall’ and stuff like that.”

Coming from a high school of only 60 people, Blalock said he was used to a small community where everyone knew everyone and had little experience in such a large social situation to begin with, let alone during a pandemic.

Ohio University freshman Carl Blalock reads a book for his English class in his Tiffin Hall dorm room on Wednesday, Feb. 10, 2021. Blalock disapproves of the format of the book, but does not mind the content.

“Basically, the only way you can really make friends is maybe if you get lucky talking to somebody on the way back from the dining hall or just going around your dorm knocking on doors,” Blalock said, from experience.

He went door to door inviting his neighbors to a GroupMe group chat for his residence hall, gathering what he estimates to be around two-thirds of the hall.

Ohio University freshman Carl Blalock sits on his bed in his dorm room while his roommate is gone on Wednesday, Feb. 10, 2021.

Blalock’s first semester experience at home was also isolating, with many of his friends there going off to their respective colleges while he remained at home.

“It's honestly been a little bit too much like that for my liking here just because there's not a ton to do,” Blalock said.

Going forward, however, Blalock hopes to get more involved in organizations, and as COVID-19 restrictions lift, he hopes that it will be easier to make friends.

While many students chose to take their classes online their first semester, Sawyer made the choice to opt out of classes entirely for the Fall Semester, instead choosing to work full-time in her native state, North Carolina, at a Panera Bread.

“I decided that it didn't make sense to pay all of that money for online school,” Sawyer said. “I'm kind of doing that right now, paying all that for online school. But I wanted to be here.”

Sawyer said she made friends on campus during move-in, introducing herself to a lot of girls on her floor in her East Green dorm. Many of them are in single dorms like she is because of the pandemic, but they have found safe ways to socialize and spend time together despite all the restrictions.

“Just with COVID-19, it's been really hard with all of the rules and trying to meet people,” Sawyer said. “And just trying not to get sick yourself (while) trying to meet them.”

Finding some normalcy within the chaos of the pandemic, Sawyer eats meals and plays card games with friends during downtime and frequently works out at Ping.

Even with the struggles of asynchronous classes, Sawyer is glad she returned to Athens. She loves Court Street, she said, and she is looking forward to warmer weather to hike in.

Also, Sawyer is still getting involved in OU traditions. Going to see Pumpkin the Cat in the Board of Elections window is now a beloved pastime, especially when missing her orange cat back home.

“(Pumpkin’s) my surrogate,” Sawyer said. “I'm so sad I haven't been able to pet him. I understand it’s because of COVID-19.”

Not every student thrived with their return to campus during the pandemic, with some, like Wagoner, opting to return home within the first few weeks of the semester.

“I kind of wanted the college experience, and I wasn't really getting that,” Wagoner said. “So I decided instead of spending the money, I would just go ahead and come home just because a lot of things are closed, and I felt really isolated.”

As an introvert, Wagoner said she found it hard to connect with others on campus and that she wishes there could have been more safe options for socialization provided by the university, like a socially distanced group study space.

“I just feel like they cared about getting the money and getting us in the dorms,” Wagoner said. “Then after that ... it's up to you. I just felt like, once we're there, there wasn't much concern about making sure you're comfortable.”

Although the situation this semester wasn’t ideal, Wagoner is excited to return to campus next fall.

“I still loved Athens,” Wagoner said. “I just think, for me, it was kind of pointless to be there while they're still trying to figure things out.”

Similar to Sawyer, Buckley said she didn’t have a bad experience being home during the Fall Semester, although she was enrolled in classes. She enjoyed being at home with her parents and her pets, but her biggest challenge was making friends.

That challenge dissipated on campus, where she made friends through her roommate and with other students in her hall.

“I decided to return to campus because I wanted to be able to meet new people, and I was really excited about being able to make friends here,” Buckley said. “It can be easier to meet people if you had in-person classes because then you can sit next to someone. I've been pretty safe, I would say, or because I wear my mask, I make sure I wash my hands all the time, and I stay socially distant from people. It's definitely different, but it's still nice to get like that interaction with people, even if you're being safe with it.”

The COVID-19 precautions around campus have made the college experience feel surreal, Buckley said, both in part because it isn’t what she imagined for herself. However, that hasn’t kept her from enjoying the Athens experience.

“I don't know any different from that because it's my first year,” Buckley said. “It's my first semester here. So I enjoy just walking around, taking in the scenery and just kind of dealing with what we have.”

When McDermott last talked with The Post, he was at home with his parents, sad to learn that he wouldn’t be returning to the university for the Fall Semester and disheartened by the at-home, online semester.

However, this semester has been different.

“I've definitely enjoyed the second semester of college way more than the first semester ever since I got here,” McDermott said. “I think, just overall, my mood and happiness have definitely doubled or tripled.”