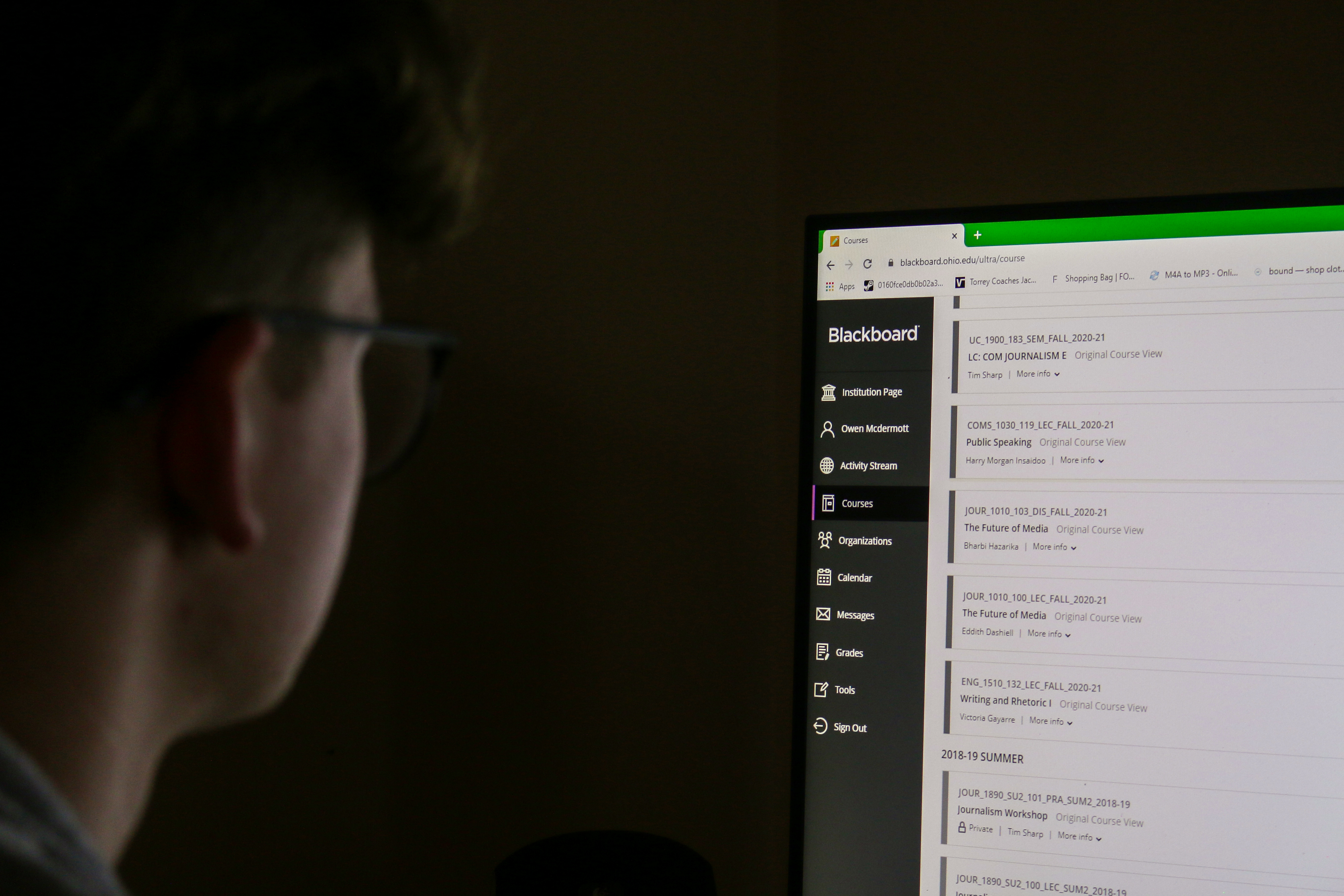 Perspective: How students who were not included in ‘Phase 2’ are handling the online semester

I t was an unusually warm November day when I arrived in Lewis Center, Ohio. Besides a slight breeze, the air was still, almost static. In this small cul-de-sac, tucked away from the rest of suburbia, lived Owen McDermott.

He stood around 6 feet, donning a pair of black-trim glasses and a gray quarter zip sweatshirt. 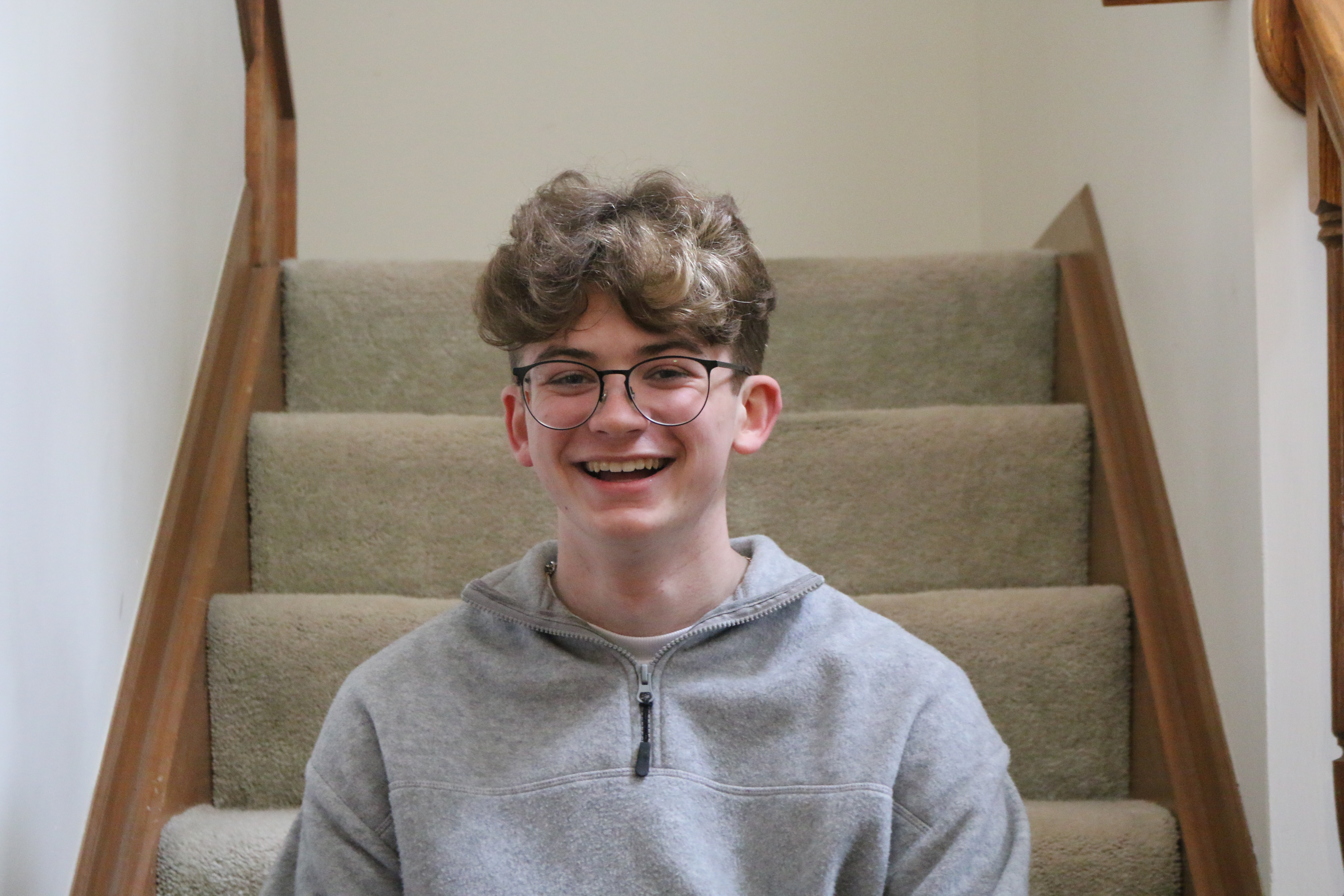 I stepped inside the McDermott residence, camera bag and tripod in hand. We chatted for a long time about life, parties and our shared uncertain futures.

“It's really hard mentally and, like, even physically sometimes,” he began.

McDermott, like many other OU students, is taking his first semester of college at home and online as a result of Ohio University’s fall “phased return.” He’s majoring in journalism and is balancing more than 30 hours of work a week at the local Jersey Mike’s on top of his 16-hour credit load.

“I want to do what's best for me and my future,” he said. “So I'll give everything my fullest effort … It can be really mentally challenging.”

As he spoke, frustration arose in his eyes. He used the voice of someone who had been progressively beaten down by a torrent of work and bad news over the entire semester. He, like myself and many others, saw their hopes of coming to campus in the fall dashed twice by the university. He told me that out of all of his friends, he was “definitely the most excited to get to go to (his) respective campus.”

“Hearing the news that we weren't going to be able to go was kind of heartbreaking for me because I was so excited to go and live my best life and move on to the next chapter of my life,” McDermott said.

A few days before meeting with McDermott, I talked with Paul Castelino, Ph.D., who is the director of the Counseling and Psychological Services at Ohio University.

“Regardless of where they are, whether they’re on campus or at home, we recognize that it is a very hard time for everyone,” Dr. Castelino said. “Our advice is to focus on the six basic things…”

“Number two is food. Make sure to nurture your body with good food and plenty of water …”

The rest of the list contained similar tasks and daily objectives: moving your body, surrounding yourself with supportive people, being compassionate with oneself and to avoid consuming alcohol or drugs as a coping mechanism.

Those are great goals to strive for, but in a pandemic, I’d like to know what students can do to combat that underlying, perpetual feeling of existential dread. I know we all experience it. That latent, humming, throbbing feeling that none of what is going on is normal.

“We need to reduce screen time; I think that is number one,” Castelino said. “The more that we are (on the) web … it is likely we are going to be more depressed, especially during that time.”

Dr. Castelino further emphasized that, ultimately, it is up to us how we spend our time. We need to be cognizant of what media we consume and what people we decide to see, as these factors contribute greatly to our overall mental health.

Another strategy that the university has deployed in the midst of the pandemic is an automated texting service, called myOHIO ADVICE. Here’s a screenshot of some of the texts I’ve received from the program: 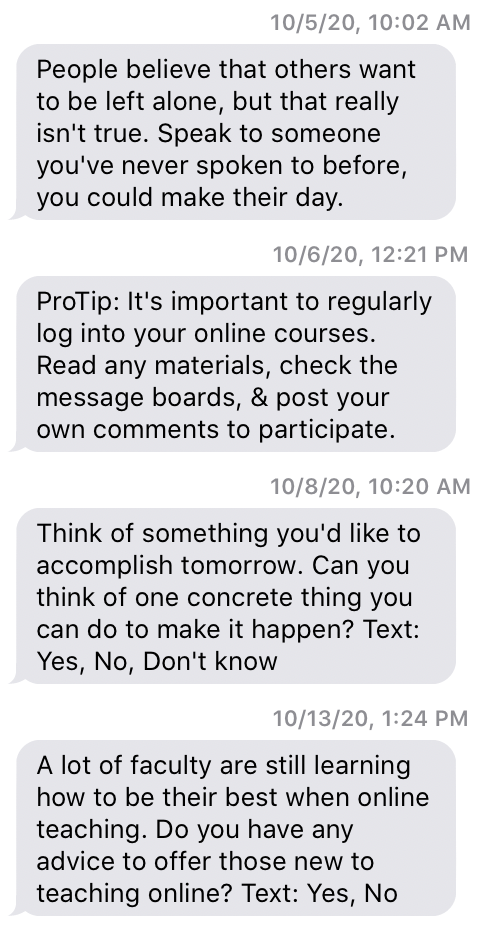 Loralyn Taylor, associate provost for Institutional Effectiveness and Analytics, explained the program via email: “A company called Persistence Plus does the behavioral science-based text nudging campaign for us. They use the latest research in behavioral psychology to help students make a successful transition to colleges, persist, and graduate. The platform isn’t designed to ‘help students’ mental health’ per se, but to help keep students informed of deadlines and help them stay on track with their studies and engage with the university to progress to graduation.”

McDermott had some harsh words for the program.

“If I’m in an upset mood, like something got me mad, if I get the texts about something corny, I'm just like, you know, I don't want to see that right now,” McDermott said. “It’s like rubbing salt in the wound.”

Jane Puzder, an undecided freshman who is also not in Phase 2, had a different opinion. She said that the texts are a “nice reminder that other people are going through what you’re going through.”

Adapting to virtual coursework at home

For many of the students who found themselves at home for this Fall Semester, it is not their first rodeo.

Puzder said she was mangining somewhat well since she had dealt with online school when the pandemic struck during her final semester of high school.

“I feel like for online school, since we did do this for a little bit in high school, that I do understand how to navigate Zoom and (Microsoft) Teams,” Puzder said.

McDermott said his communication with professors has been limited and that the experience has been “all right."

“I've got other classes, and they might not get back to my emails and stuff like that,” McDermott said. “So it hasn’t been the easiest to communicate with professors personally for me and just with not having much time. But when it comes to emailing a professor, usually they get back to me within a day or two.”

Those mixed feelings about adapting to an online-only world extends into students’ free time as well.

Niamh Buckley, a freshman studying psychology, is taking her first semester of college at home, like Puzder and McDermott. Buckley says that “if I'm on TikTok and I go through my ‘for you page’ and it's all people complaining or posting negative stuff, I kind of find that it bums me out a little bit.”

Sometimes, though, Buckley uses the social media platform as an escape from negativity.

“It just honestly depends on the day and what people are posting, like what's showing up on my algorithm,” she said.

I’m writing this story from my childhood bedroom.

328 miles from Sowle Hall in Athens, Ohio, where I should be living right now.

I am in the same group as the students I interviewed. I was not in Phase 2, and I have been adapting to this semester online. My editor, Shelby, is in California, dodging wildfires and a deadly virus, while making sure to hop on Zoom at 6:40 a.m. Pacific Standard Time for her online class.

Despite being hundreds or even thousands of miles away from the school we love, we are still students, still Post journalists and, most of all, still Bobcats. The story of every student during this pandemic is merely a thread in a giant tapestry that we are all weaving together.

But isn’t there a silver lining to be found here?

“It might suck while I'm doing it, but I'm thinking about it, and I'm like, ‘You know, this is definitely gonna help me in my future,’” McDermott said. “I'm going to graduate on time, I'm making a lot of money. I can still see some of my friends and at work some of my best friends are at my work. I love getting to go to work and work with my homies, basically.”

Another student in McDermott’s situation, David Lasky, an undecided-business freshman, said he is optimistic for the spring.

“I’m excited to see what the future holds,” Lasky said.

"And that’s really all we can ask for in these times: optimism and gratitude in the face of one of the most difficult periods in recent human history.

This piece is the beginning of a series of collaborations between the opinion and culture sections. It includes first-person perspectives from students at Ohio University and The Post. The opinions reflected in this piece do not represent those of The Post.