Snowballs, sledding, a sense of normalcy 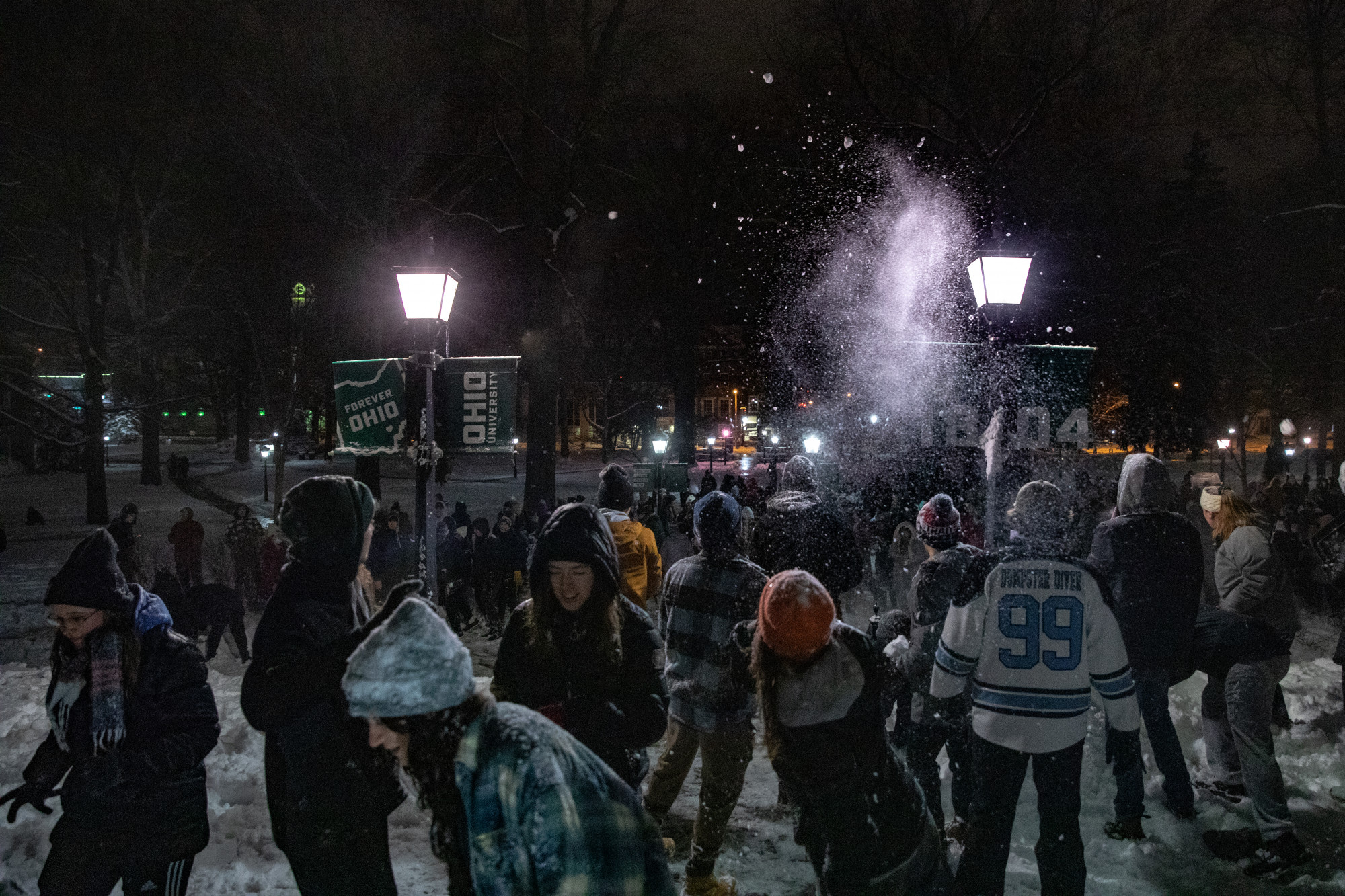 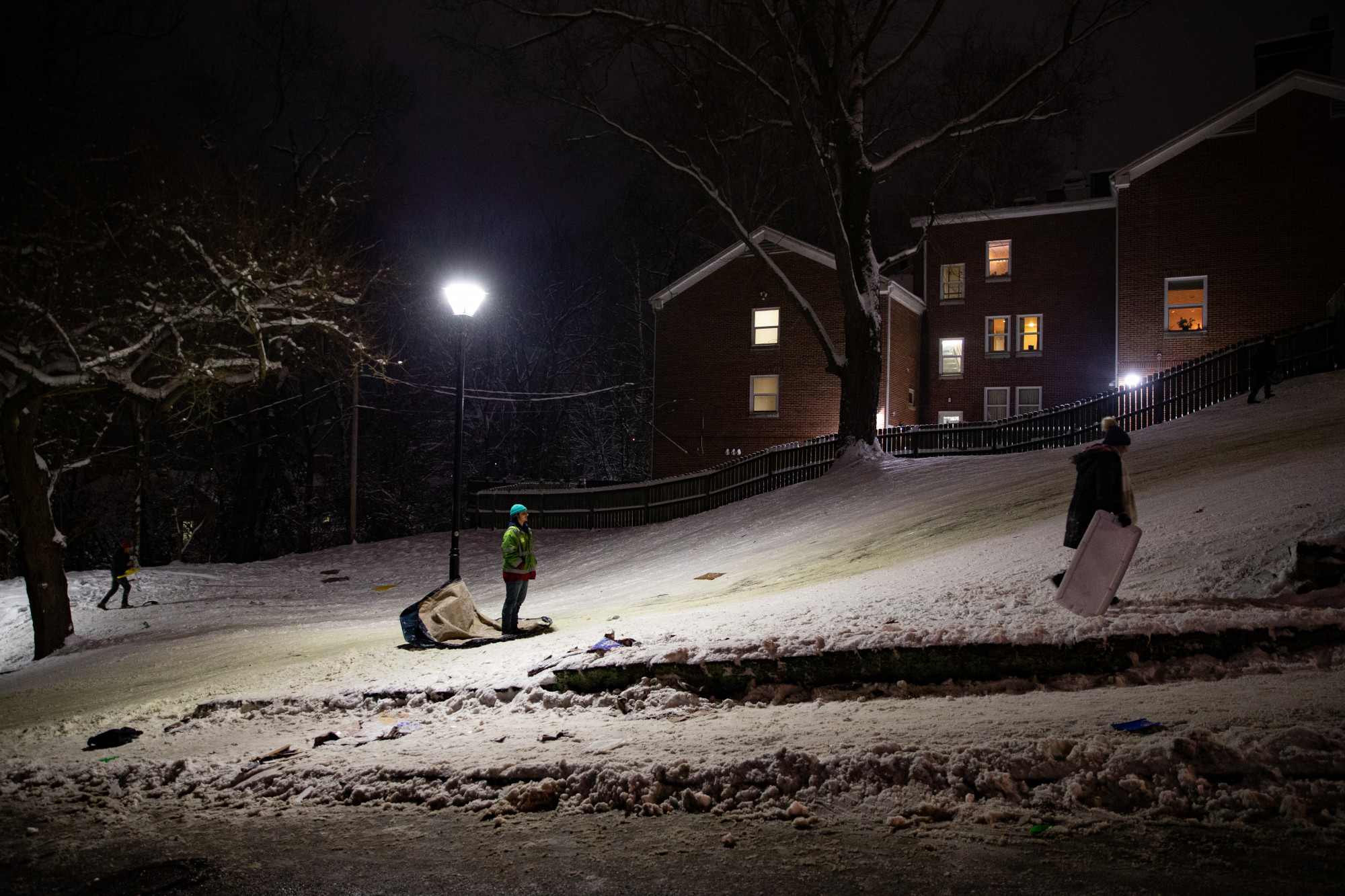 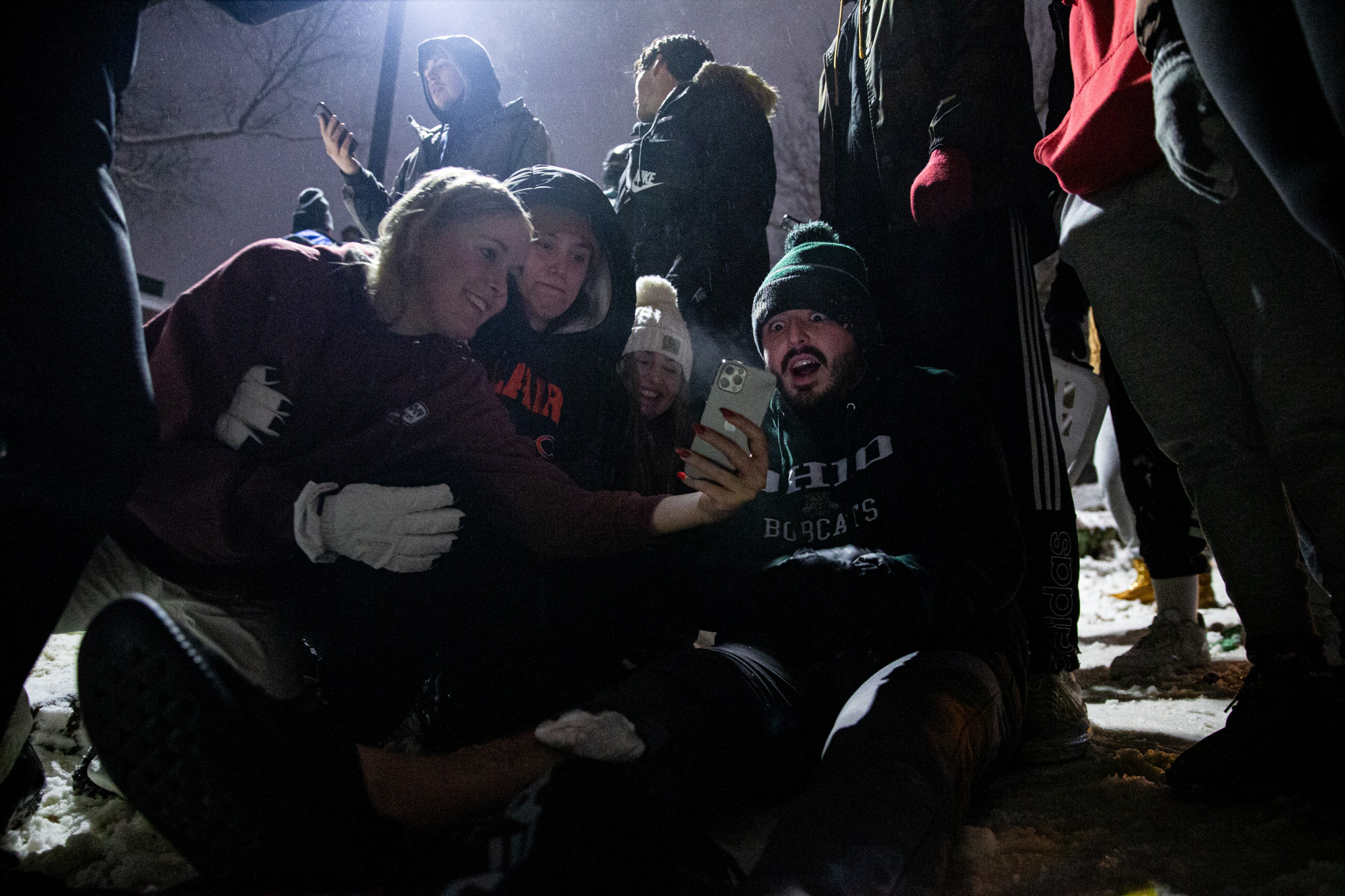 Jesse Jarrold-Grapes
Jacob Wagner looks down at his bruised leg after being injured on Jeff Hill at Ohio University while sledding on Monday, Jan. 17, 2022. The Ohio student went sledding on the infamously steep hill after Athens received the first major snowfall of the spring semester over the weekend.
4 / 15 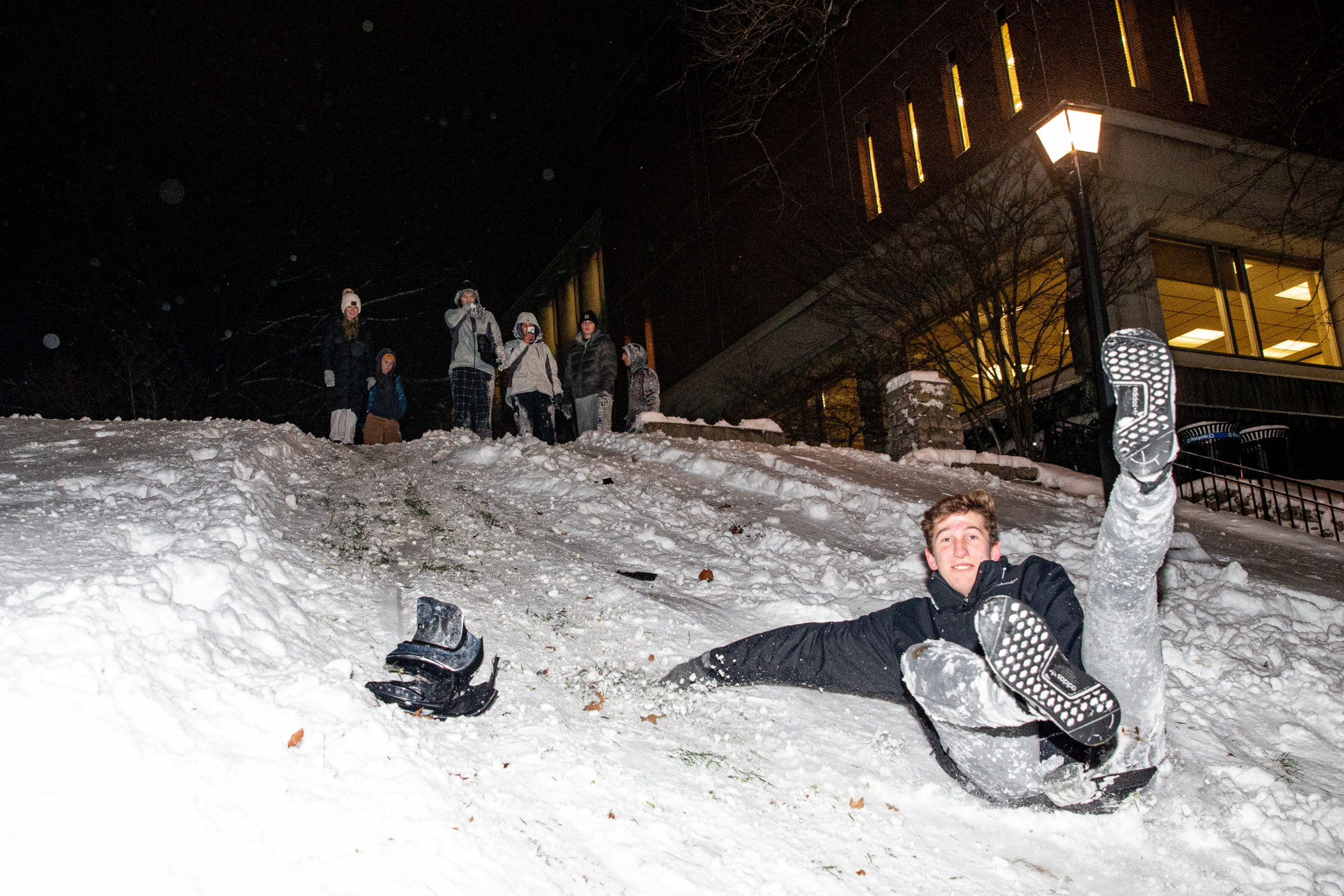 Jesse Jarrold-Grapes
Zach Conover, a freshman at Ohio University, slides down the hill toward the Scripps School of Journalism building on College Green on Monday, Jan. 17, 2022. Over the first weekend of spring semester Athens collected between five and eight inches of snow.
5 / 15 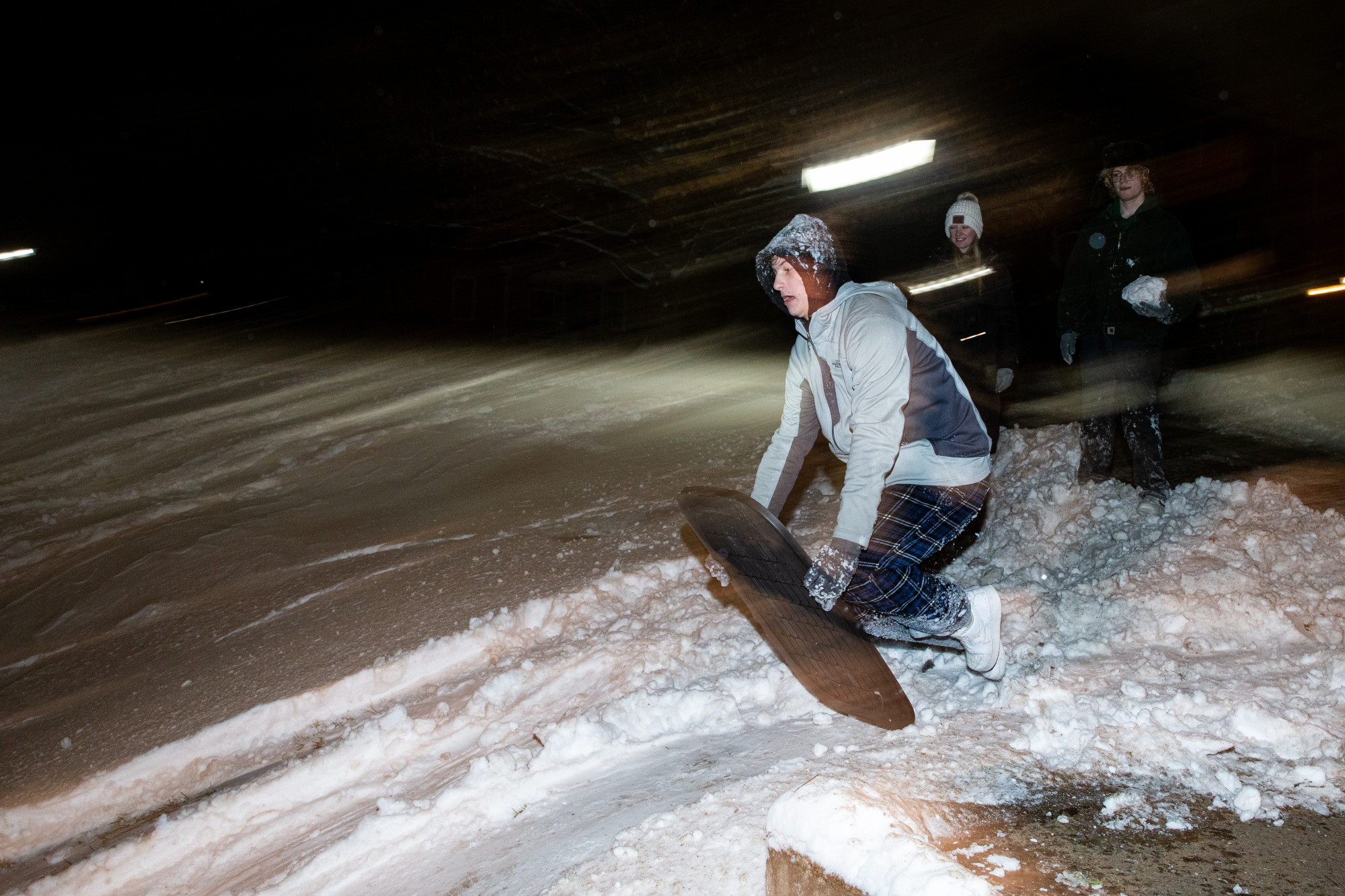 Jesse Jarrold-Grapes
Ohio University freshman Houston Davis jumps on a bin lid to use as a sled at the amphitheater at Scripps Hall on Monday, Jan. 17, 2022. After more than five inches of snow blanketed the Athens area during the first weekend of the spring semester, over 200 students ventured out into the 25 degree weather for a snowball fight followed by sledding organized by the Snowcats, a ski club on campus.
6 / 15 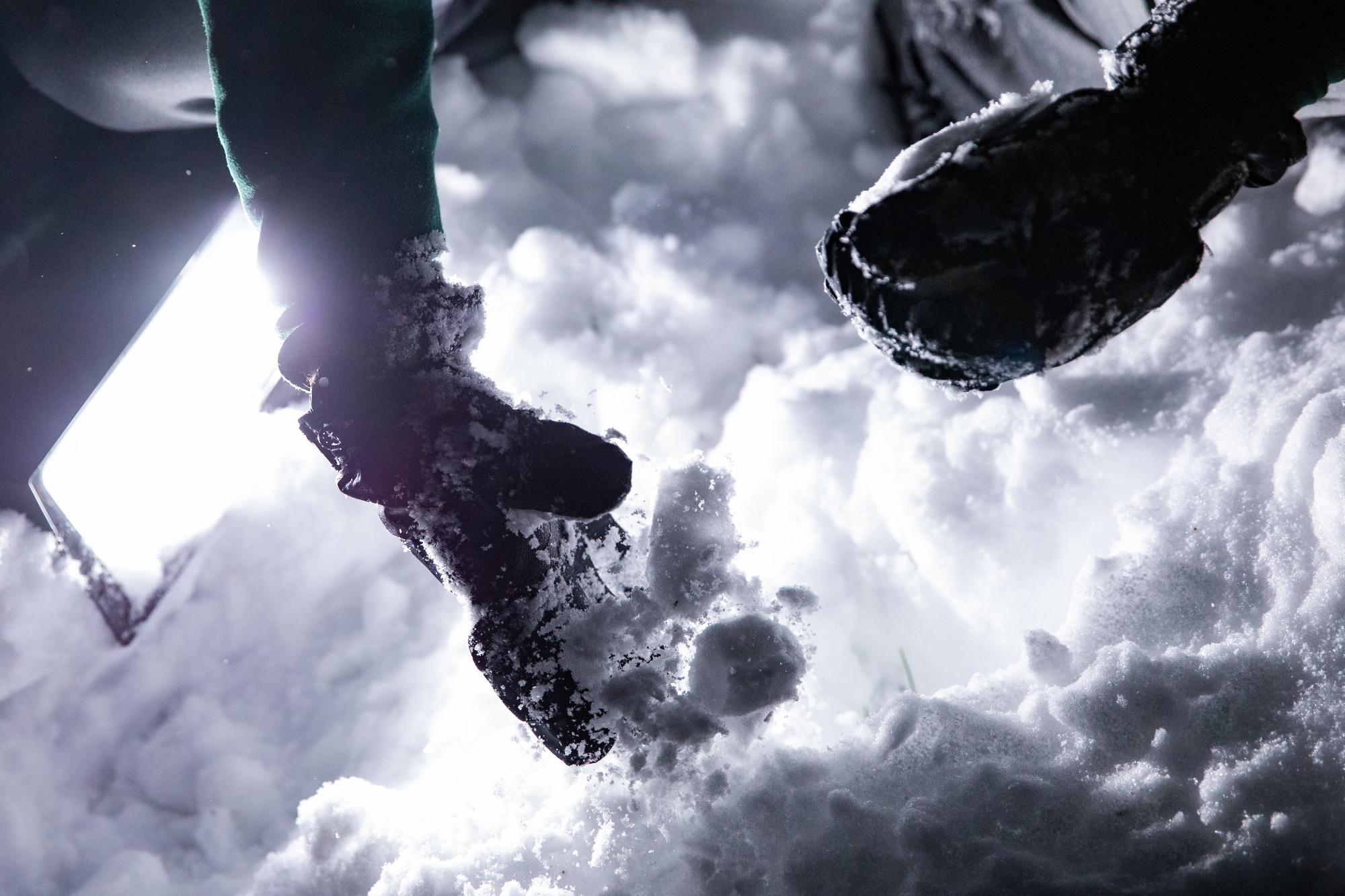 Nate Swanson
Snow is scooped and shaped into snowballs for a battle fought on College Green.
7 / 15 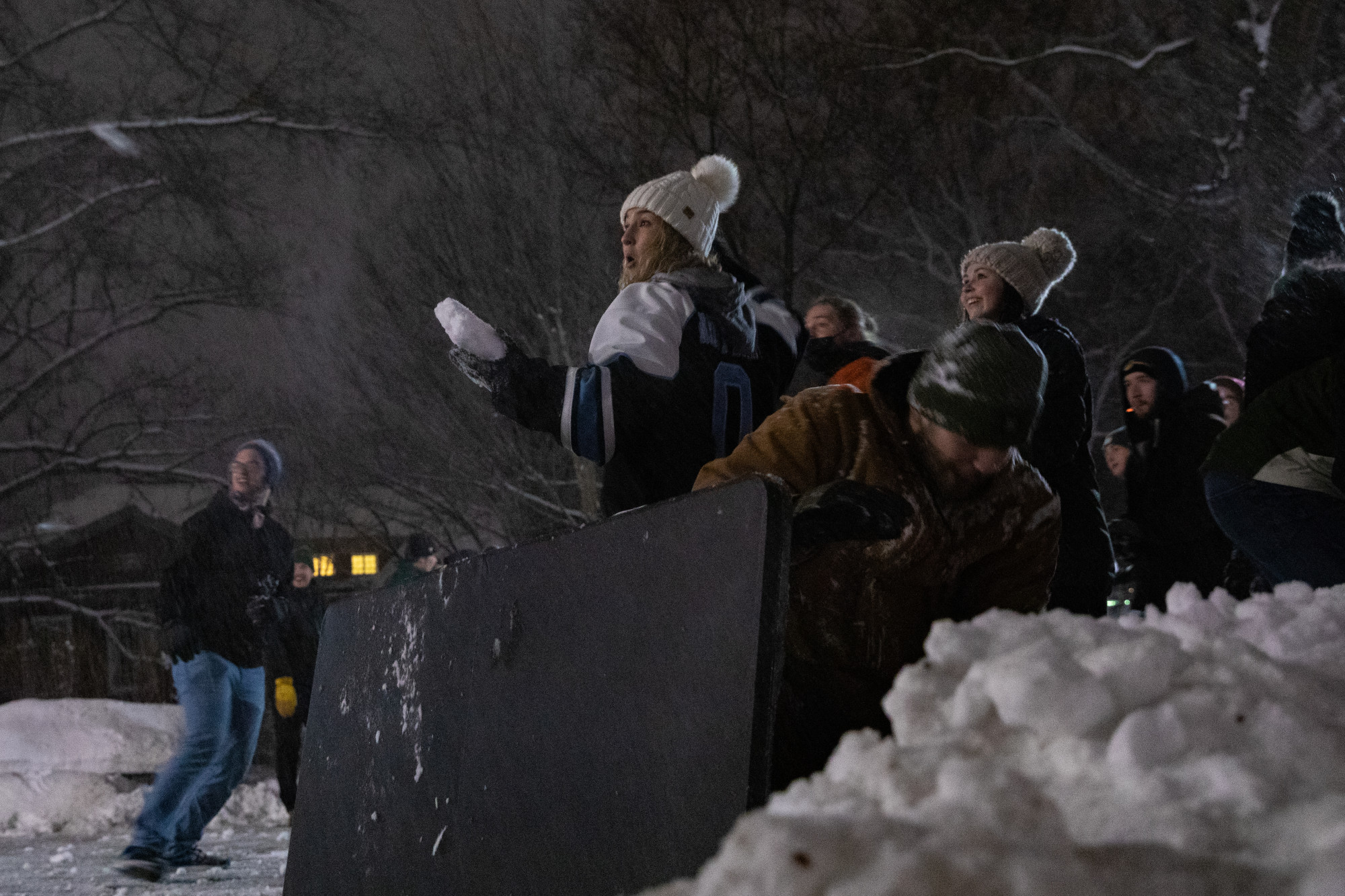 Nate Swanson
Participants in the mass snowball fight use a folding table as a blockade in the midst of a match held between groups on College Green and in front of Cutler Hall.
8 / 15 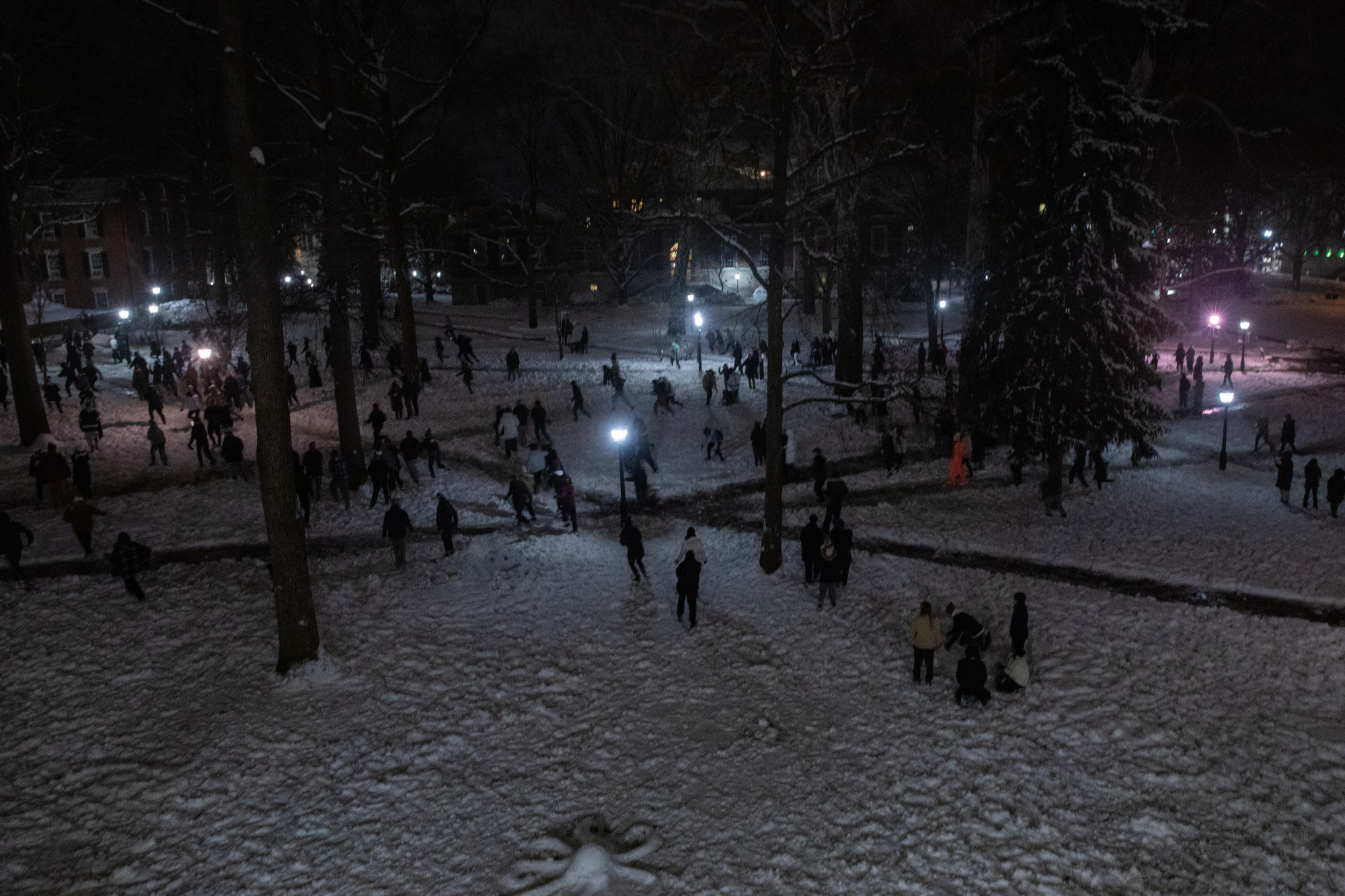 Nate Swanson
Throughout the evening, students gathered to College Green to engage in a snowball fight planned through social media.
9 / 15 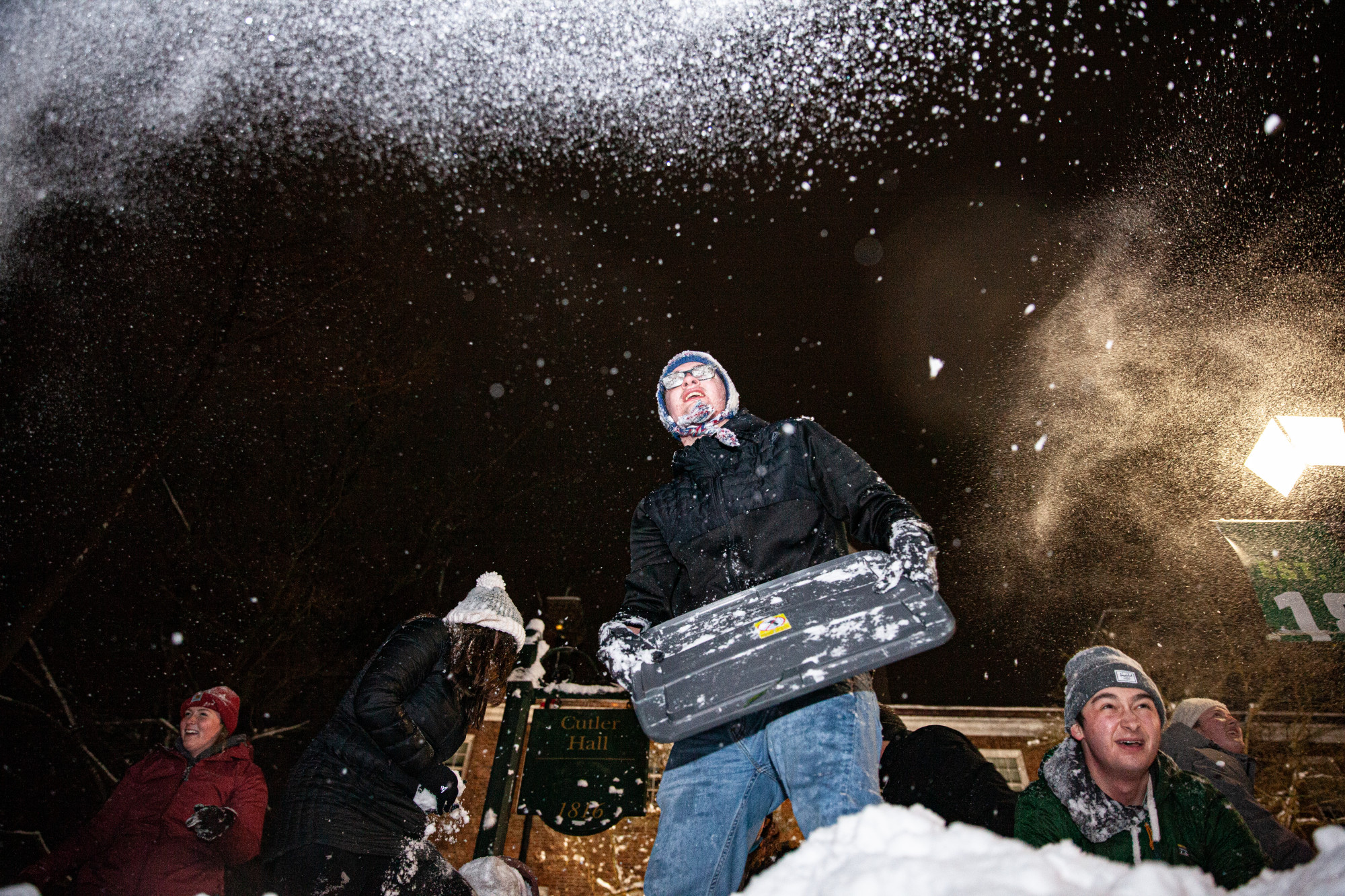 Jesse Jarrold-Grapes
Students at Ohio University play in the snow after more than five inches fell over the first weekend of the semester. Many students played in the snow as it fell on Sunday but were unsatisfied, causing the Snowcats, the ski club on campus, to organize a snowball fight on College Green with more than 200 people in attendance.
10 / 15 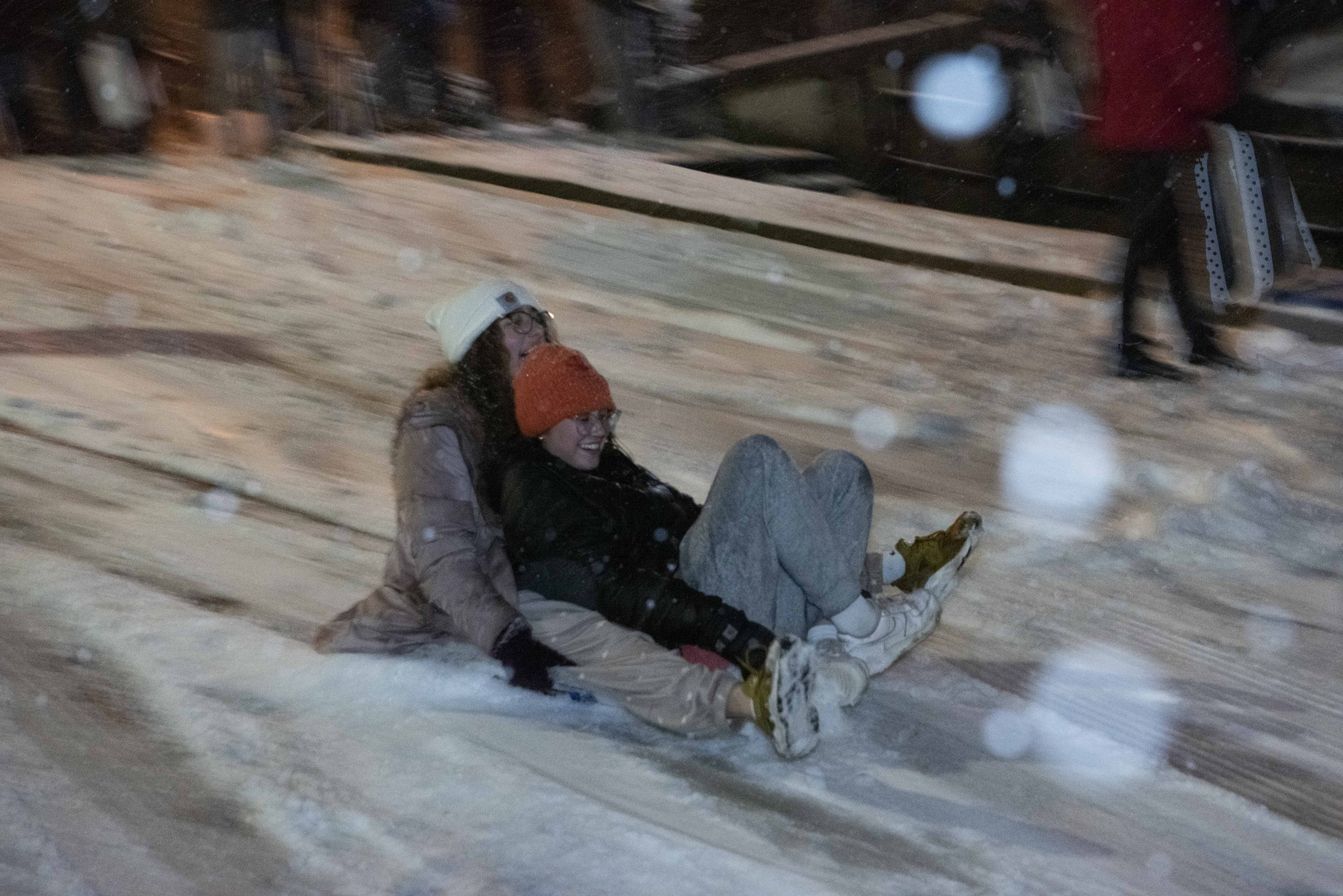 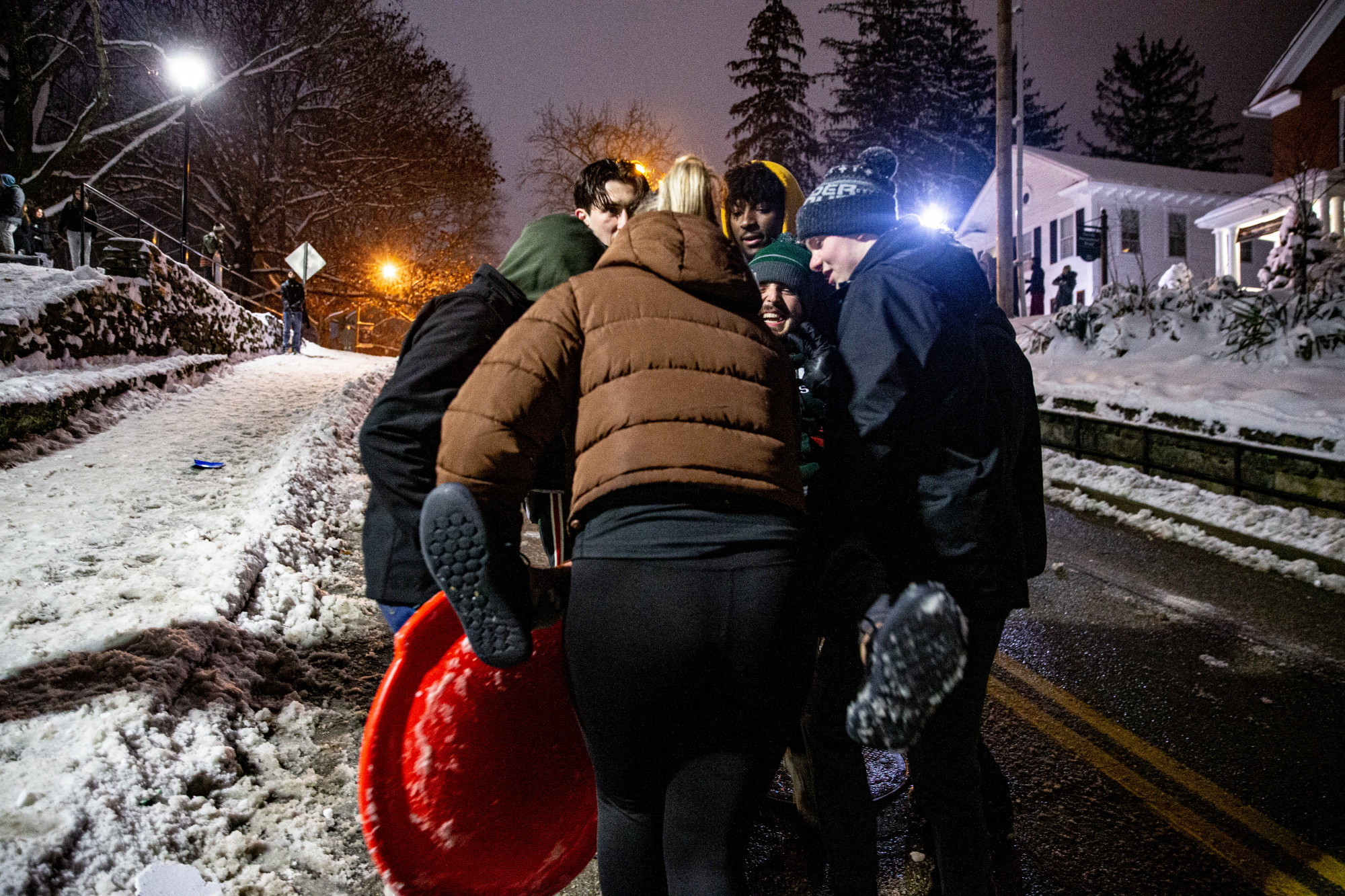 Jesse Jarrold-Grapes
Jacob Wagner is carried up Jeff Hill after hitting a lampost and injuring his leg while sledding on Monday, Jan. 17, 2022. Soon after he realized he could not stand a group of fellow Ohio students, friends and strangers, gathered around him to comfort and help him manage the pain.
12 / 15 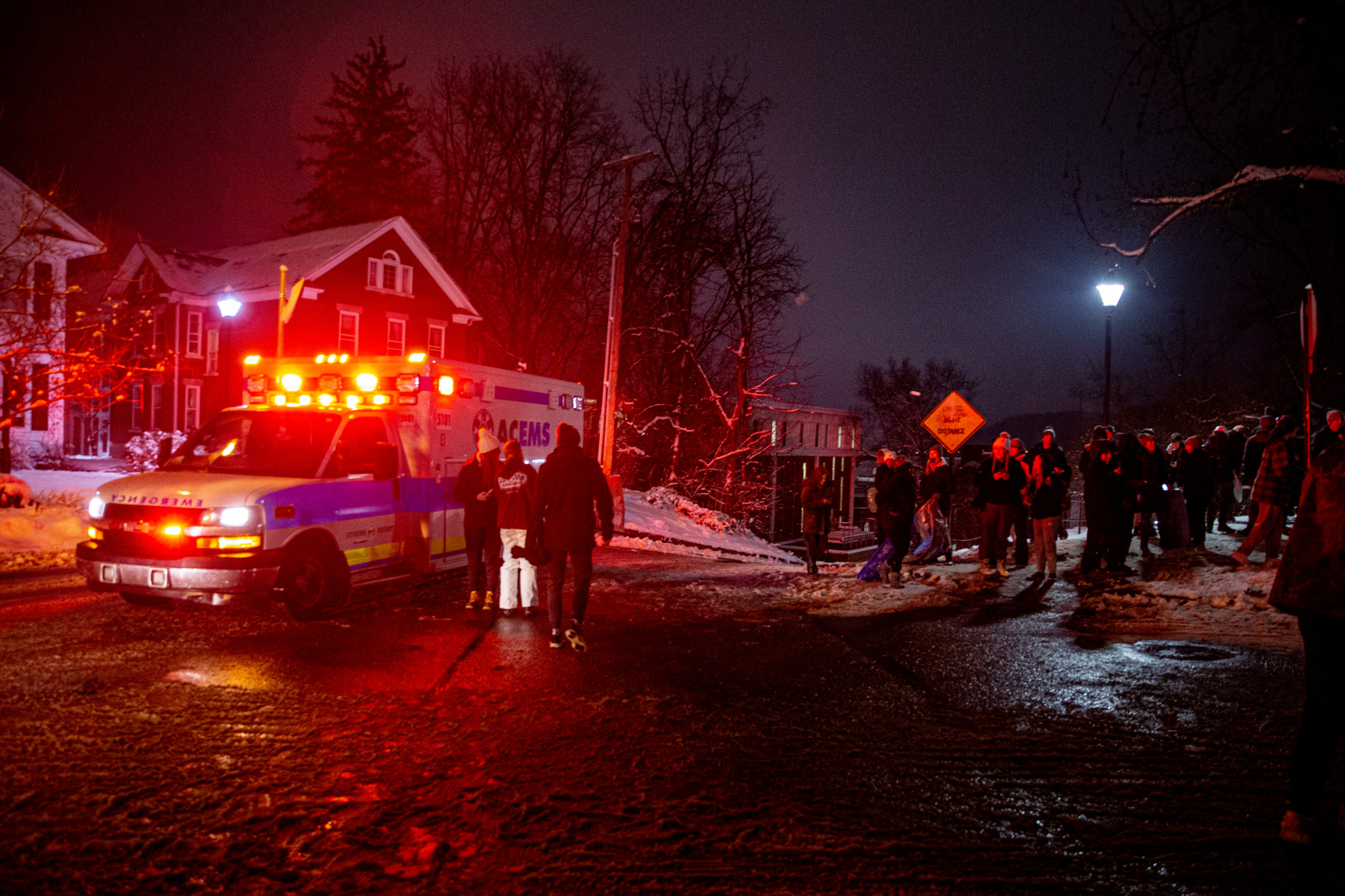 Jesse Jarrold-Grapes
An ambulance arrives for Jacob Wagner at the top of Jeff Hill after the Ohio student was injured while sledding on Monday, Jan. 17, 2022. As the flashing lights crested the infamously steep hill, Wagner was hurried into the trunk of a friend's car and was promptly driven away to the sounds of cheering students in order to avoid paying for the notoriously expensive healthcare service of an ambulance.
13 / 15 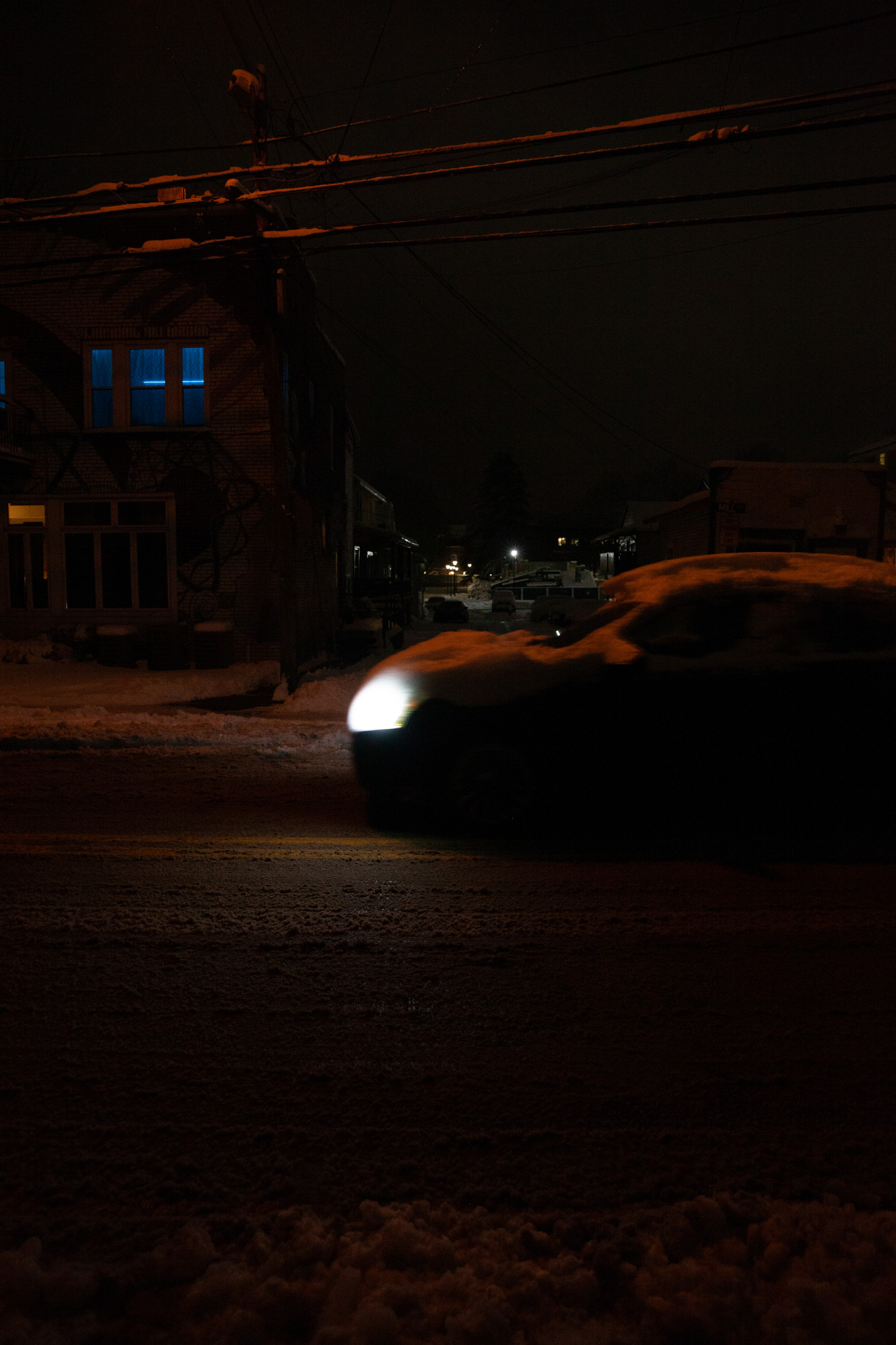 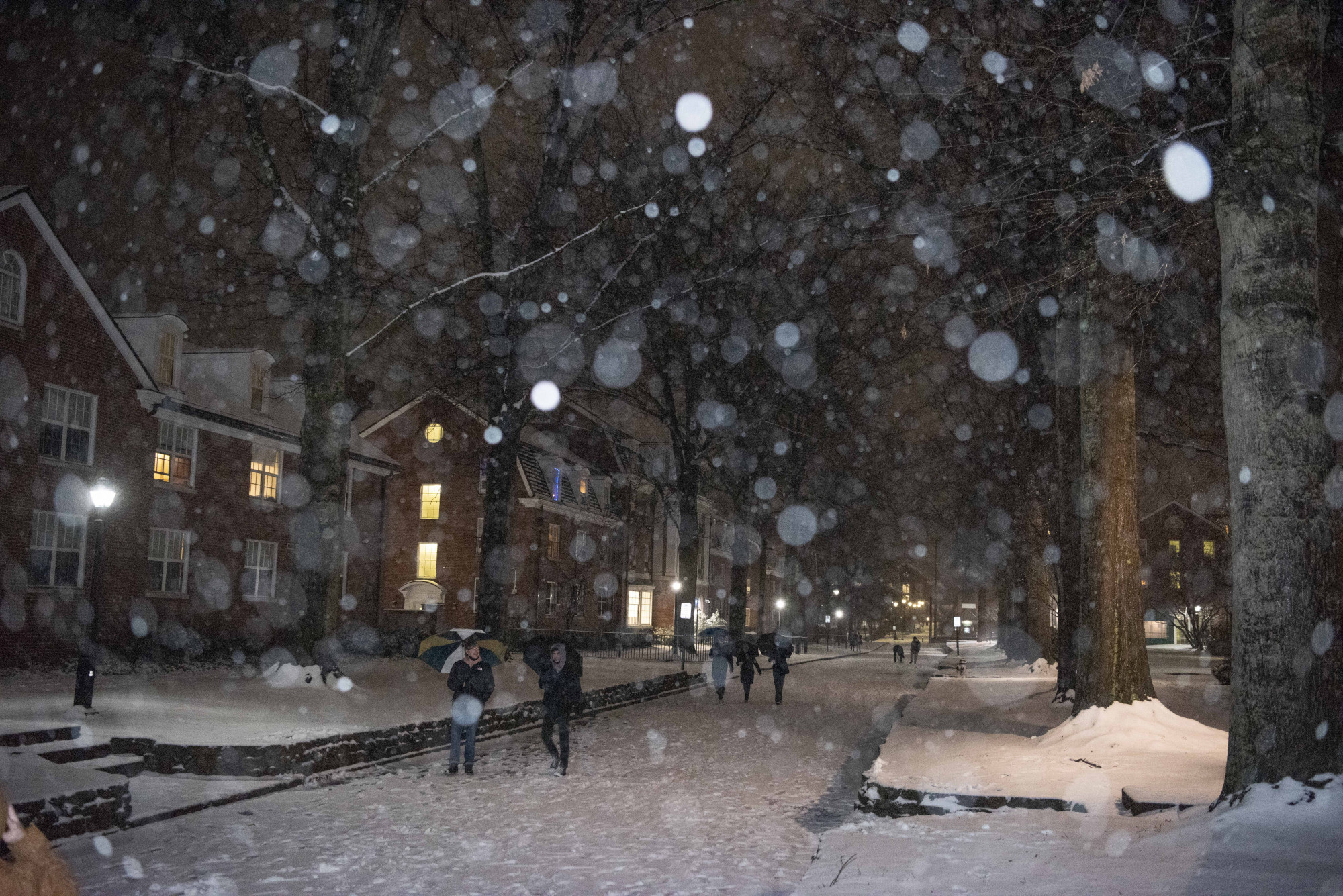 Ryan Grzybowski
Snow falls on East Green bringing out students from their dorms and playing in the snow.
15 / 15 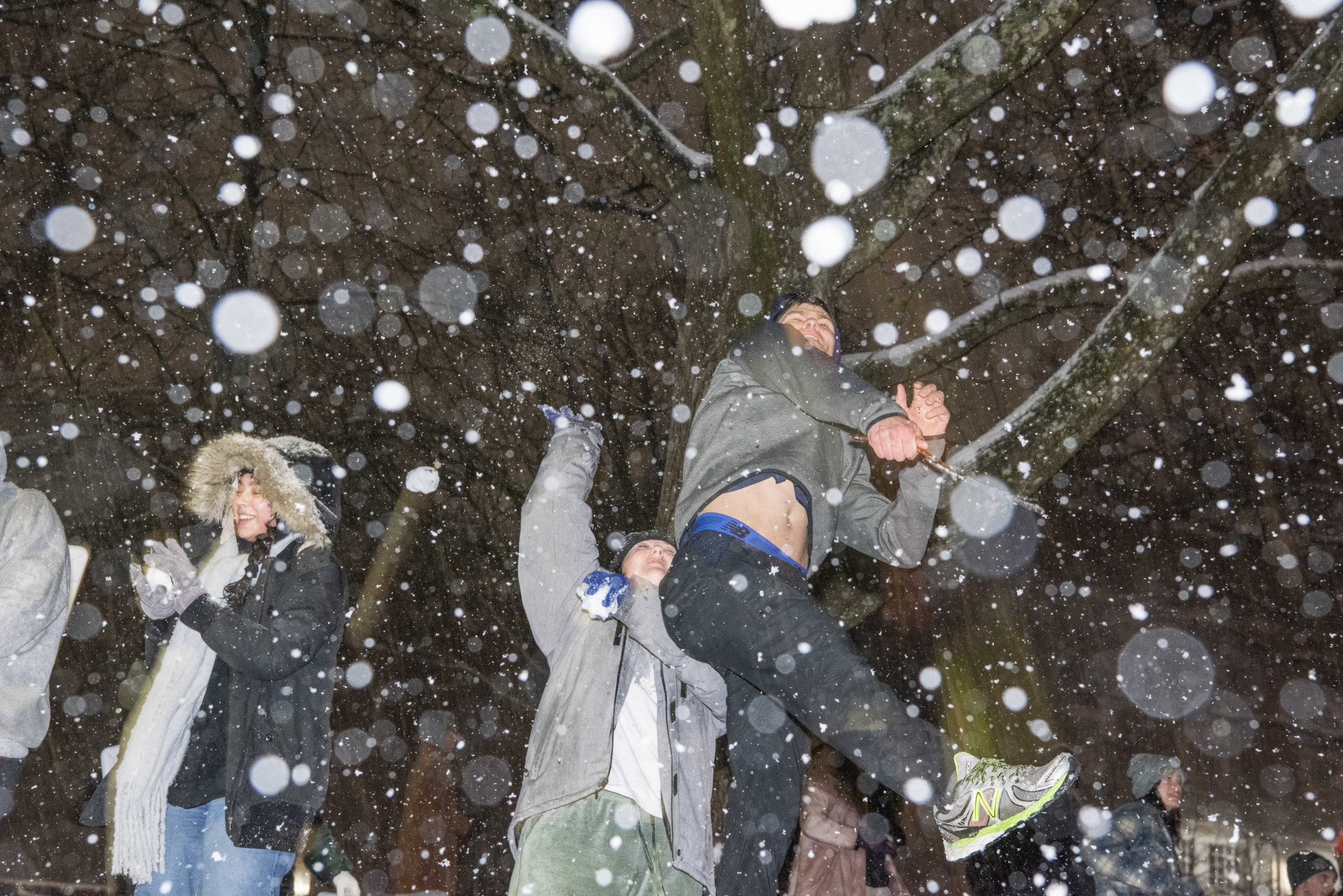 Some unknowing students walking across College Green on Monday night were greeted with a flurry of snowballs as they unintentionally walked into a joyful campus snowball fight.

The onslaught of snowballs began at 8 p.m. in front of Cutler Hall, joining together students of all years and majors to partake in the chilly fun. Around 200 students gathered after word of mouth, Snapchat stories, Yik Yak posts and group chat messages gave them the time and place. Throughout the evening, many people cycled through, with smiles and squeals of delight all around. After almost two years of college during the COVID-19 pandemic, many saw the snowball fight as a bit of normalcy during an eventful and stressful time.

Unless, of course, they got pummeled with a large chunk of snow.

There were many attempts at retaliation, with strategic hiding places and surprise attacks from all corners of the green, but there was no bad blood on the battlefield. Few were spared from the flying snowballs, but all were happy to partake in the fun.

Some students brought tables and other items to use as barricades while others came out with laundry bins to hold their ammunition.

There was a collective excitement in the air, Leimkuhler said, as she and a friend were pelted by snowballs. She said it felt great to be outside in the midst of all the fun.

Turner Sorge, a sophomore studying anthropology, took a second away from the chaos to absorb the weight of the moment, aside from throwing snowballs.

“It is just really nice after COVID to be able to see so many people out having fun, especially something like a snowball fight,” Sorge said. “You can get a lot of primal energy out, so people are just going crazy, and it feels good to just let your energy out after being cooped up for two years. It's nice to see everybody from every class out having fun.”

With bass from a portable speaker booming in the background, Jackie Smith, a junior studying science education, laughed with her friends as they planned their next move, packing snowballs and heading toward another group. She arrived just after 8 p.m., she said, but after an hour, the group was still going strong.

For students from warmer climates, packing a cold snowball and lobbing it at a friend had an extra special significance. Isaiah Davis, an undecided freshman, said he came out to the snowball fight alone, but when he arrived, he knew a lot of the people who were already out throwing.

“I’m from Florida, so the snow is something kind of new,” he said.

It was his first snowball fight.

After around an hour and a half of brutal warfare, some students surrendered back to their dorms and apartments. However, for many, the fun didn’t stop there. They grabbed cardboard, storage container lids, inflatable air mattresses and even some of the laundry baskets used for snowball storage less than an hour before and made their way down toward Jeff Hill. The sledding took place not on the road but on the grass just to the side of it. A few students did make it into the empty street, often with cheers from the crowd.

When somebody saw a car coming, a collective student body yelled “car!” to warn their peers of any impending danger.

Huckleberry Jones, a sophomore studying sports management, said by the time he made it to Jeff Hill to sled, he was tired from throwing snowballs, but he was still having a great time. Being covered in snow wasn’t weighing down his spirits.

“Honestly, I can't complain,” Jones said. “I'm from California, so this whole foreign object of ‘a snow’ is pretty fun.”

Delaney Minto, a sophomore studying nursing, and Olivia Lewis, a sophomore studying biological sciences, returned from their journey down Jeff Hill with grins, and both said they couldn’t wait to go down again. COVID-19 had changed the college experience for Lewis and Minto, but both were thankful for the opportunity to go out and enjoy a more typical aspect of their college experience.

“It’s better than I heard it was last year,” Lewis said.

While most of the crowd spent a few hours enjoying the cold, snowy hill’s sliding capabilities, one unlucky sledder ended his evening with a trip to the hospital. Jakeb Wagner, a sophomore studying meteorology, had a run-in with a light pole, and an ambulance was called to the scene for his leg injury.

Despite some injuries, cracked sleds and freezing in the 20-degree temperatures, going out and playing in the snow gave some much desired relief from the grind of daily college life and the challenges many students have endured during a semester with COVID-19.

“It's some good anarchy,” Sorge said.