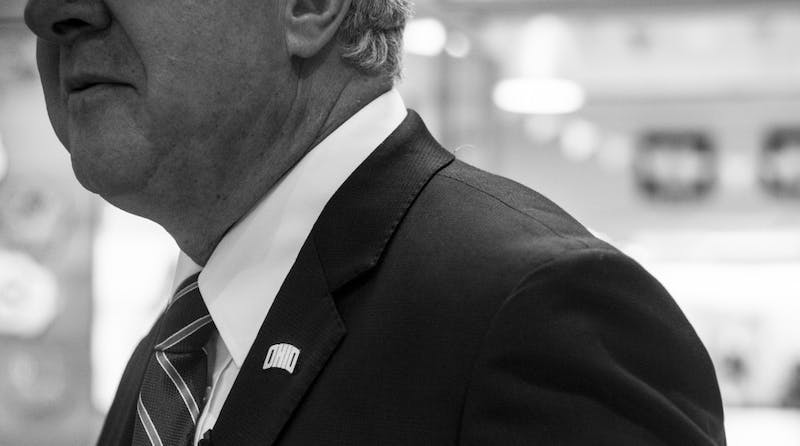 Nellis serves his faculty and students across the map


Chuck Martin was at a loss when he arrived at Kansas State University in 1989. He was a new face in the geography department and had yet to earn his doctoral degree, which most other faculty members already had.

“I was basically given a year contract and if I wasn’t done with my Ph.D, defending my dissertation, I would have lost my job,” Martin said.

When Martin finally received his doctorate in geography, he had many people to thank for their support. One of those people happened to be his department head, now the 21st president of Ohio University: Duane Nellis.

“Duane was very instrumental in helping me get my teaching moving forward,” Martin said.

Nellis comes from a lengthy background of working at universities across the country. He has been dedicated to faculty at several universities, recognizing their achievements and efforts to students. Those skills and experiences will help him continue to shape OU.

Over the years, Nellis has worked at multiple universities, including Kansas State University, West Virginia University, the University of Idaho and Texas Tech University.

Nellis when he started his career at KSU.

Nellis began his career at Kansas State University in 1980, where he served as an assistant professor in geography. He later rose to become a professor and head of the department of geography from 1987-1993.

Afterward, he served as associate dean at the Kansas State College of Arts and Sciences for about three years. He left for West Virginia University to be the dean of Eberly College for Arts and Sciences, but then returned to KSU in 2004.

He stayed there as the university’s provost until becoming a finalist for the University of Idaho presidency in 2009.

“He really tried to keep in touch with what they were doing in terms of their research and their teaching,” Martin said. He is very much a faculty-centered administrator. I’m sure he will be that way at Ohio University.”

“I also feel like the experiences I've had there helped to shape me as far as my experiences and commitment in areas like learning and engagement, my commitment to inclusivity and social justice,” Nellis said.

He also has several awards for his work in agriculture and rural geography and his achievements according to a Kansas State news article.


While at West Virginia University, Nellis served as the dean of Eberly College of Arts and Sciences. He helped new majors become available for students, including forensic and investigative science, women’s studies and criminology.

A headshot of Nellis during his time at WVU.

“His style of leadership was inclusive and respectful of shared governance while pressing a forward-looking vision that kept the college's academic programs contemporary and student-centric,” Gerald Lang, a provost for WVU during Nellis’ time there, said.

Nellis’ passion for geography did not stop, even while he was the dean.

Nellis even taught geology and geography, including a freshman introductory physical geography course and a graduate-level remote sensing class. He conducted geographical research in natural resource systems and geospatial analysis.

He also oversaw the planning and construction of the $50 million Life Science Building, which houses nationally ranked psychology and biology departments, Lang said.

“Duane was well liked by the college's faculty as he represented them well,” Lang said in an email. “He hired great faculty that became today's cornerstones of the college's research focus. Duane was the model of a servant leader.”

Nellis in front of the president’s office.

Nellis served as the University of Idaho’s 17th president and, while this was his first presidency, he had to make some tough decisions that affected both faculty and students.

At the time, the university was facing economic difficulties. Jobs had to be eliminated, student fees increased and degree programs were no longer offered.

During his presidency, student enrollment increased and University of Idaho gained national recognition of the university marketing campaign, Vision 2020, which helped create a sustainable economic base for the university.

To recognize staff and faculty at the University of Idaho, he even created two awards: the University Distinguished Professor Award and the Presidential Mid-Career Award.

Later in his career at the University of Idaho, he announced the creation of two task forces to ensure campus safety, including a substance and alcohol abuse task force to evaluate the university’s policies and examine its relationship with fraternities and sororities, according to a UI news release.

“While it is true that substance abuse is a complex national problem that we’re not immune from; it is our duty, because of the deep responsibility we feel to students and their families, to regularly examine how we handle these issues so that we can do everything possible to help our students make wise choices that allow them to remain safe,” Nellis said in the news release.


Nellis went on to his second presidency, becoming the 16th president of Texas Tech University in 2013. He had many accomplishments at Texas Tech, including achievements with faculty, staff, students, alumni, donors and the community.

“(Nellis is) someone who understands that it takes all members of a campus community to provide the type of education, experience, and growth that our students deserve,” said Aliza Wong, Faculty Senate president at Texas Tech during Nellis’ first year of presidency.

Nellis posing with the Raider Red at a football game.


When it came to Texas Tech’s faculty and staff, Nellis improved faculty awards, created development opportunities and continued enhancing research and teaching space, according to a news release.

Graduation and retention rates were a goal of Nellis. He improved those rates by hiring more advisers and working with students who were struggling academically or transitioning to a different college.

Lastly, he worked to connect the community with the faculty at Texas Tech to work on projects and help improve the campus.

“Someone who respects faculty governance, creates opportunities for professional development for staff, and asks how he can better serve as an educator, administrator, colleague, and citizen,” Wong said in an email.


While interviewing for the presidency at OU, Nellis asked that his travel arrangements be made to allow him to teach his class before boarding the airplane, Wong said.

“Even when a personal opportunity arose, he thought first of the well-being of his students,” Wong said in an email. “And that, to me, is the best type of president a university can have."

Nellis spent his first day at OU just like any other new Bobcat — at orientation, where he met Rufus, he received his ID card and ate a meal in one of the campus dining halls.

“The fire that was lit when I went away to become an undergraduate student is still there today,”  Nellis said. “It was reinforced at each place that I’ve been, how special universities are and what they contribute not only to our states, but to our nation and the world.”

Just like any other new student, Nellis has goals for the upcoming years in Athens: He wants to continue to focus on social justice, inclusivity and diversity, along with creating engaging learning environments for students in which they have opportunities to work together.

“I just want to make sure that I am accessible and engaged with the university community at every level,” he said.