The history and personalities behind Athens’ oldest business

Kris Cornwell spent her days on Court Street long before it was lined with a bevy of bars and chain restaurants.

As the owner of Cornwell Jewelers, 77 N. Court St., Cornwell recalls catching a bus with her sister and riding from her grandparents’ home on Peach Ridge Road, north of Athens, to Court Street, where they’d wander from shop to shop. 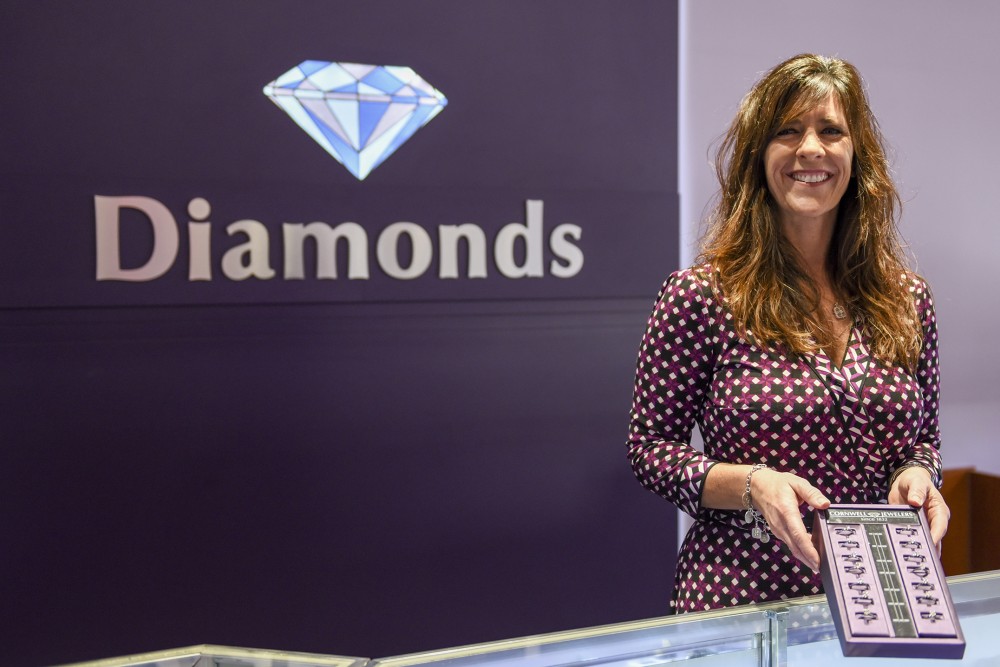 “At 6 and 8 (years old) ... my grandpa’s jewelry store was the hub of everything, so we would have to go check in with him, then we’d go off and go shopping somewhere, or go see a matinee, or go get pizza,” Kris said.

Kris fondly recalls spending time in that narrow, worn space, in the same building where Cornwell Jewelers had existed since 1832, and playing with costume jewelry her grandfather had taken in on trade. At the time, she wasn’t so concerned about diamond earrings or ruby wristlets.

“More than anything, to me it wasn’t so much about the jewelry, but that’s just where my grandpa worked,” Kris said.

It’s much more about the jewelry now. Since purchasing the business from her parents in the early 2000s, Kris has transformed the store to meet the needs of modern shoppers. As a result, a long-standing piece of Athens’ history, Cornwell Jewelers, is rolling into the future with its sixth-generation — and first female — owner at the helm.

Who is Kris Cornwell?

It wasn’t a given that Kris would take over the family jewelry business.

“When I finished my graduate degree … my mom actually said, ‘Have you ever thought about working in the jewelry store?’ And I said ‘No? I haven’t,’ ” she said. “It was never discussed. It was never talked about.”

But it happened. She finished a master’s degree in education in 1994 at Ohio University and, persuaded by her mother, tried her hand in the jewelry business. The early years weren’t easy.

“I went in pretty naive, but it’s been a journey and I’ve learned so much,” she said. “When I started, I knew zero about business, zero about gemology, all of it — marketing, finances. I mean, I was an education major in English, and I could write a lesson plan.”

In 1997, she became an American Gem Society-certified jeweler — a designation that means she’s qualified to identify and appraise gemstones — and began attending conferences for jewelers, learning how to run the business.

While tackling that learning curve, she had to deal with other obstacles: Customers and industry colleagues often assumed her male employees were calling the shots, and she wasn’t always taken seriously.

She told The Post about the first time she attended an American Gem Society conference as a 24-year-old. “I can’t tell you how many people asked me what I was doing there, what my role was,” she said. “Back then, it was pretty much owners and top managers that would go to this event. So here I was. People probably thought I was a relatively new member of the sales team. I was questioned pretty heavily — nicely, but they didn’t get why I was there.”

Now, after 25 years in the game, she’s established herself and picked up the knowledge needed to push the business forward.

“There is no smarter businesswoman,” Eric Coon, who worked in the store for more than 40 years, said. He cited Kris’ business acumen as the reason the store is still chugging along today. “That type of thing has made her a legacy, and that’s what keeps the store going. She can adapt to the trends, and to me that’s very very important.”

Kris said she consistently heard customers saying they wanted to shop at her store but struggled to find parking on Court Street. The new building fixed that.

Then, when customers started saying they couldn’t find the store, she looked for some way to make it stand out. That’s when she and her staff decided to purchase a 1967 Cadillac, paint it purple and park it in front of the store. The car still catches the eyes of passersby today. “People take pictures of it, selfies with it all the time,” she said.

The Cornwell family had been selling jewelry to Athens residents for more than 100 years before that purple Cadillac ever rolled off the line.

John Cornwell opened a jewelry shop on the second floor of 10 S. Court St. in 1832. At that time, Robert G. Wilson — the namesake of OU’s Wilson Hall — was serving as the school’s president, and the Civil War wouldn’t break out for another 29 years.

The store’s founder is also responsible for its only extended closure. In 1852, he rode west to California by train and wagon, one of thousands who risked their lives in an effort to strike gold. He left his store, wife and six children for four years.

“As I understand it, Cornwell Jewelers is probably the longest standing, continuously operated businesses on Court Street and certainly as a jeweler has been long standing. The Cornwell family has been a cornerstone of the city of Athens for a long time.”- Athens Mayor Steve Patterson

“From what I’ve researched, he put a sign on the door, like a ‘gone fishing’ sign, except he went to the gold rush,” Kris said. John recorded his experiences in a diary now housed in Alden Library. He wrote at length about difficult living conditions, sparse success and about selling daguerreotypes — early photographs — as an extra source of income.

Returning in 1856 to Athens, he reopened the jewelry store. Since then, management of the store has snaked its way through six generations of Cornwells, making it the second-oldest family-owned jewelry store in the U.S.

“As I understand it, Cornwell Jewelers is probably the longest standing, continuously operated businesses on Court Street and certainly as a jeweler has been long standing,” Athens Mayor Steve Patterson said. “The Cornwell family has been a cornerstone of the city of Athens for a long time.”

Kris’ father, Les Cornwell, opened a second jewelery store in 1966 at 49 S. Court St., where Whit’s Frozen Custard is today. “It was like a small Tiffany’s in Athens, Ohio,” Coon said.

Today, Coon is a property manager for Cornwell Properties, which owns and operates a swath of student rentals in Athens. Les began buying rental properties in the early 1970s, and continues to rent some of Athens’ most recognizable student dwellings, including Palmer Place.

Les’ uptown store closed its doors in 1987 and was folded into Cornwell Jewelers’ original location at 10 S. Court Street, where it stayed until Kris moved the store in 2002.

Unlike the gemstones sold at the store, it’s difficult to say what Cornwell Jewelers will look like in 10, 20 or 30 years.

Kris depends on her willingness to change in managing the store, and trends in jewelry could push Cornwell Jewelers to continue changing. A 2014 report from management consultants McKinsey and Company predicts the share of fine jewelry sales happening online could double to 10 percent of total sales by 2020, and Kris knows the nature of shopping — and Court Street — is changing.

“Most of our customers now, we’re a destination store,” she said. “A lot of people don’t work on Court Street like they used to, so to see us, they drive to us. So there could be a time when they don’t want to come to Court Street.”

“You never know. But to me, when I’m dead and gone, I think the store will still be there.” - Eric Coon, who worked in Cornwell Jewelers for more than 40 years

“When you get engaged, do you want to say to your wife, ‘I bought my ring on Amazon’ or ‘I bought it online?’ ” Coon said. “You know, it’s nice to come in (to the store). They find out about your history, where you’re going. And a lot of jewelry has been sold that way.”

The McKinsey report agrees, predicting that online sales of fine jewelry won’t grow to much larger than 10 percent of the total market, for roughly the same reason Coon laid out.

“You never know,” he said. “But to me, when I’m dead and gone, I think the store will still be there.”

What exactly will happen when Kris retires is unclear. She’s said she hopes one of her daughters will take the reins, but with her oldest is still in high school, it’s much too early to tell.

“I want my girls to feel they can follow their own dreams and not what my dream was and what my parents’ dream was,” she said.

A previous version of this report incorrectly stated the date of the Civil War in relation to the opening of Cornwell Jewelers. The article has been updated to reflect the most accurate information.