Women entrepreneurs break barriers of all kinds through innovation and assurance

There is no typical day for a woman entrepreneur in Athens.

Each day brings something new — new challenges, responsibilities, people to talk to and decisions to make. Owning a business means wearing many different hats, from salesperson to marketer to product producer.

The businesswomen of Athens County are innovators and barrier breakers. Their work goes beyond buy-and-sell transactions to improve the lives of those around them through creativity, determination and kindness. Athens businesswomen work in a range of industries for a multitude of reasons, and each has her own extraordinary story to tell.

Cornwell Jewelers is founded, making it the oldest family-owned business in Athens.

Kris Cornwell takes over as store manager shortly after joining the staff.

Kris Cornwell purchases the store from her parents and becomes the first woman to own the business.

Kris Cornwell makes the decision to move the store from 10 S. Court St., where it had been for more than 100 years, to its current location at 77 N. Court St.

Jane Cavarozzi, co-founder and owner of Dirty Girl Coffee, came to Athens County looking for a sanctuary where she could relax and unwind. What she found was inspiration and a desire for change

Dirty Girl Coffee is a social enterprise, Cavarozzi said. The business roasts and sells only organic, fair-trade coffees that are shade grown or women-produced. Its products are roasted in small batches in a just-in-time business model: There is no inventory, and everything is made to order. The business model makes for a bit of a hectic schedule, but it sets the brand apart in freshness and quality.

“Coffee’s just a great way to communicate with people,” Cavarozzi said. “When people come to buy coffee, we often hear their stories of their lives and their challenges and their successes. It was a great vehicle for what we are trying to do.”

As the name suggests, women are at the heart of it all. Cavarozzi works on additional initiatives to inspire and elevate women in Athens County through social and economic development. When she isn’t roasting, brewing, bottling and packaging orders, she’s attending meetings with local political officials, business owners and economic groups.

“In places where poverty is rampant, women get hit the hardest, and that’s where we want to move the needle,” she said. “We want to give women the opportunity in our area … so that they can have a good livelihood and support themselves and their families and be the backbone of our area.”

Luckily, Cavarozzi thinks she’s found a great place to thrive both as a business owner and an agent of social change.

“(Athens has) an amazing local food sector, and the community and the public generally really get it, and they support anything that’s produced locally,” she said. “Not just for women, but I think in terms of supporting local business, Athens is an amazing place to be.”

Cornwell Jewelers is deeply embedded in Athens history. Founded in 1832, it is the oldest family-owned business in Athens and the second-oldest family-owned jewelry store in the U.S. Six generations of Cornwells have owned and operated the store, and it has its first female owner.

Kris Cornwell took over as store manager in 1994, just a few months after becoming a part of the staff. Around 2000, she purchased the store from her parents and became the first woman to own the business steeped in legacy. 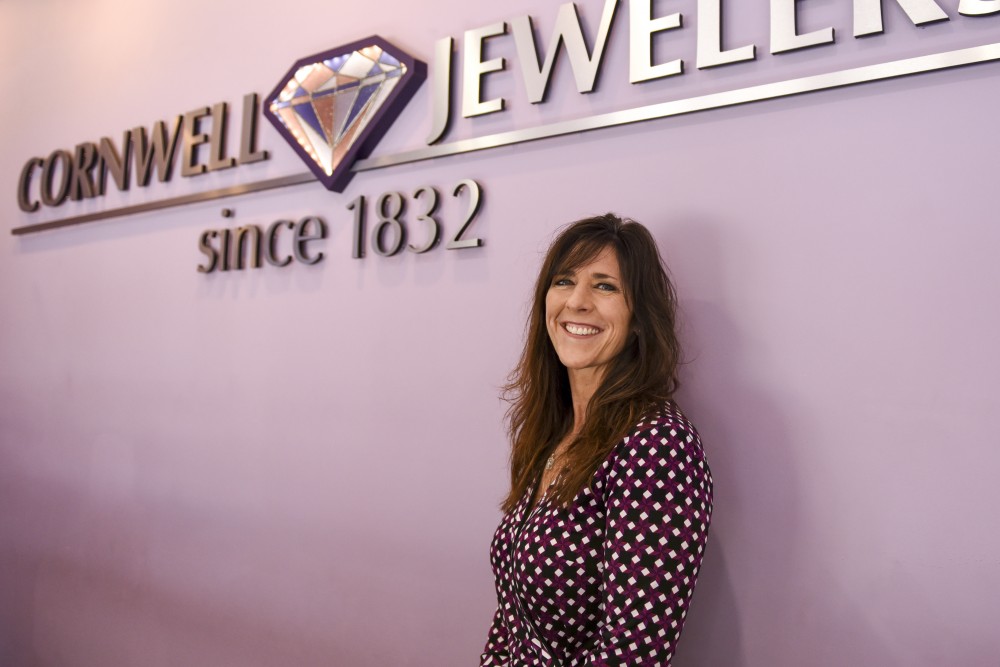 The job has proved to be a bit of a challenge at times. Cornwell has faced some difficult decisions, such as deciding to move the store to its current location at 77 N. Court St. from its original location at 10 S. Court St., which it occupied for more than 100 years.

She also faced her share of people who doubted her or didn’t take her seriously because of her gender — the jewelry industry was run primarily by men, especially when she first took over as owner. Conferences of industry leaders and even day-to-day interactions sometimes resulted in quizzical looks or condescending comments directed her way. Thankfully, it has improved for her, nearly 25 years in the business.

Despite the challenges of the job, Cornwell finds the most satisfaction in the connections she makes with customers. She strives each day to make people feel happy and at home in her store while they pick out gifts for loved ones or important mementos.

“It’s that kind of thing that makes me love what I do,” she said. “It’s not necessarily about the jewelry, but it’s the people that come in for the jewelry. Jewelry is emotional, whether it’s an engagement ring or a wedding band or a gift for somebody. … We’re a part of all that, and that’s really special.”

Danielle Young is a one-woman show.

Almost 10 years ago, she started her own green cleaning business to have a flexible work schedule that worked well with her duties as mother to three young children. But commercial “green” cleaning products, she soon found out, were not so green after all.

Her solution was to make her own products from all-natural, plant-based ingredients. She first used them in her work and then began selling them to friends and clients. Now Nature’s Magic cleaning products can be found on the shelves of Athens businesses such as Kroger, the Farmacy and Ohio University on-campus markets. They are also bought in bulk and used by other businesses, such as Donkey Coffee and Espresso, Avalanche Pizza and Jackie O’s Brewery and Taproom. Nature’s Magic has even grown beyond Athens to reach vendors in Columbus, Cincinnati and Toledo.

“I felt sort of on an island for a while and felt kind of lonely. By putting myself out there … it’s really helpful, because we have this passion. We have this drive. But we also have questions and concerns and setbacks that we can kind of help each other with, just through storytelling.” - Daniell Young, owner of Nature’s Magic

Young does it all herself, from creating the formulas to producing the products to making deliveries; in its entirety, the business is run by her. It makes for busy days, but it’s worth it.

“I thought if I could do this and do it well, I could help folks,” she said.

Being the sole operator of a business has its challenges, but Young has found comfort in networking with other female entrepreneurs in Athens. To her, finding other women to talk with about shared struggles has become a crucial part of being a business owner.

“I felt sort of on an island for a while and felt kind of lonely,” she said. “By putting myself out there … it’s really helpful, because we have this passion. We have this drive. But we also have questions and concerns and setbacks that we can kind of help each other with, just through storytelling.”