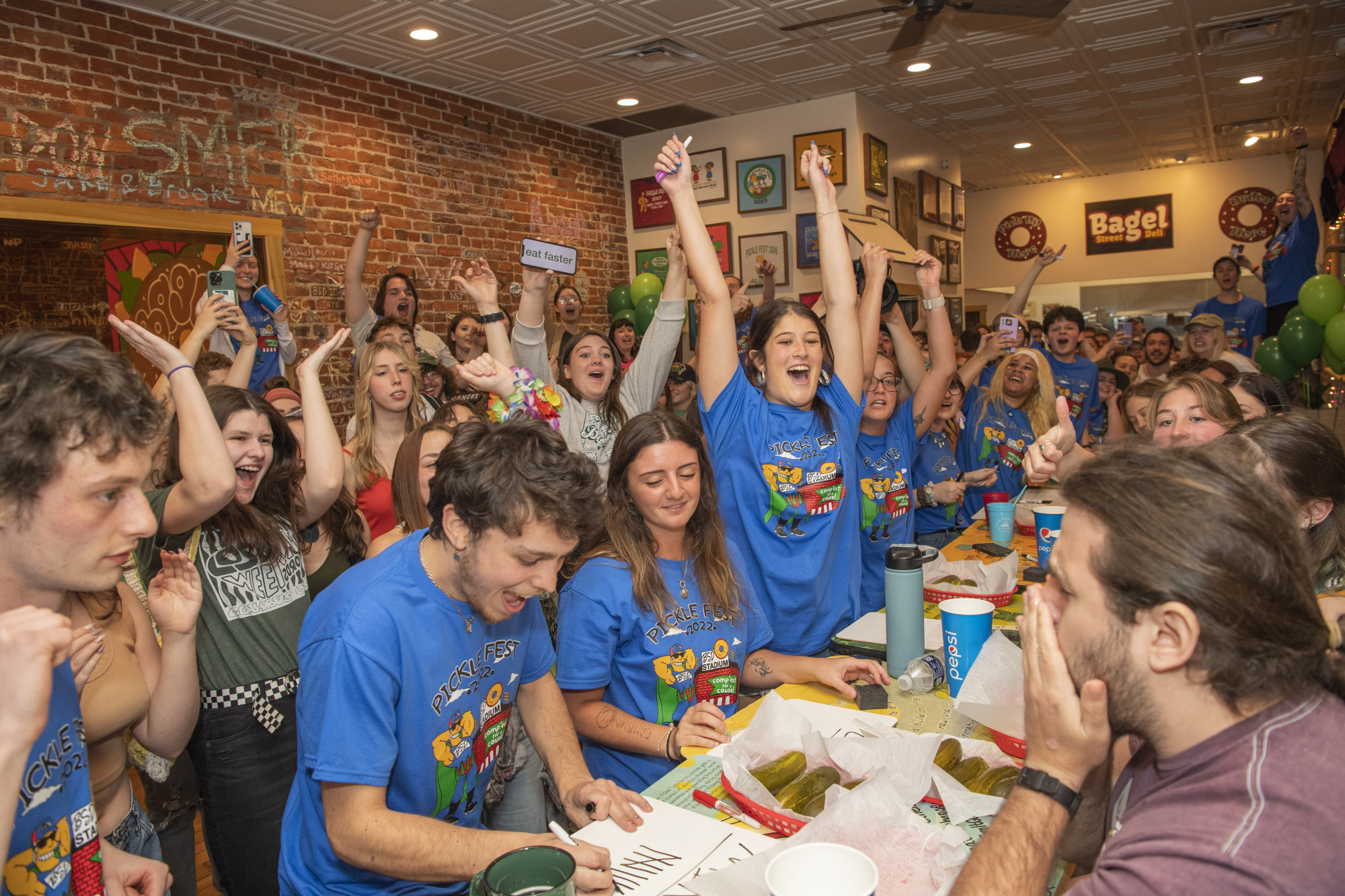 The crowd inside Bagel Street Deli cheers as Michael Fitzpatrick wins the second heat on March 18, 2022.

Baskets of pickles flew across tables to an eager crowd. Shouts for more baskets persisted as contestants devoured pickle after pickle, competing against each other — and the ticking clock.

That is the enthralling image of Pickle Fest, an annual charity pickle-eating competition hosted by Bagel Street Deli. March 18 marked the long-awaited return of Pickle Fest to campus.

“It's just a great tradition,” Megan McElligott Meyer, co-owner of Bagel Street Deli, said. “It’s a weird one, but it’s a fun one, and (it’s) a really great reason to bring people together.”

McElligott Meyer said the event dates back over 20 years but was transitioned into a charity event in 2015.

“It just felt like, ‘Why are we doing this?’” McElligott Meyer said. “We decided to shift it. We charge people five bucks to get in, and then we match that. So for every contestant, essentially $10 is going to a charity.”

In addition to choosing the recipient organization of the donation, the winner of Pickle Fest also gets to create their own bagel to temporarily add to the Bagel Street menu, McElligott Meyer said.

Caedon Li, a senior studying civil engineering and Bagel Street Deli bageler, was there to help staff the event. Though he did not compete in this year’s Pickle Fest, he said he has participated in the past and ate 5 1/2 pickles before getting sick.

“I think everyone should do it at least once but never again after that,” Li said.

Aside from the competition aspect, Li said the event is fun to prepare for with his coworkers, and the energetic, intense atmosphere makes for an exciting event.

“It's definitely (my) top three favorite days of the year,” Li said. “It's a really nice day where everyone comes together to put on this event, and we have a good time doing it.”

This year was the first Pickle Fest since 2019 due to the COVID-19 pandemic, but the competition that built up during its absence was fierce.

The contest was divided into four rounds in which around a dozen contestants packed behind a long table, forming a panel of pickle-eaters. Each contestant was provided a Bagel Street bageler to offer support and record the number of pickles they had eaten. Each contestant aimed to devour as many pickles as they possibly could during the 10-minute heat. However, a bucket loomed underneath the table – just in case.

With a blow of the inaugural “pickle horn,” the first heat began. A sea of observers hoarded into the dining room to cheer and chant in support of the competitors throughout the duration of the round.

The contestants wasted no time. The sight of 13 brave challengers devouring pickles in a variety of different ways both disgusted and enthralled the crowd even further.

Though the participants put up a good fight, the first heat was dominated by Parker McKee and Coen Starner, two seniors from Logan High School.

McKee struck first in round one and finished the first pickle of the competition. McKee and Starner were neck and neck, but Starner took the lead on the second pickle. McKee was unable to bridge the gap.

“We've been trash talking each other all week, so I was pretty driven,” Starner said.

Starner was awarded first place in the first heat with eight pickles eaten, but the score needed to be high enough to endure three more rounds and dozens of skilled pickle-eaters.

A new slew of contestants took their seats 15 minutes after the conclusion of round one. 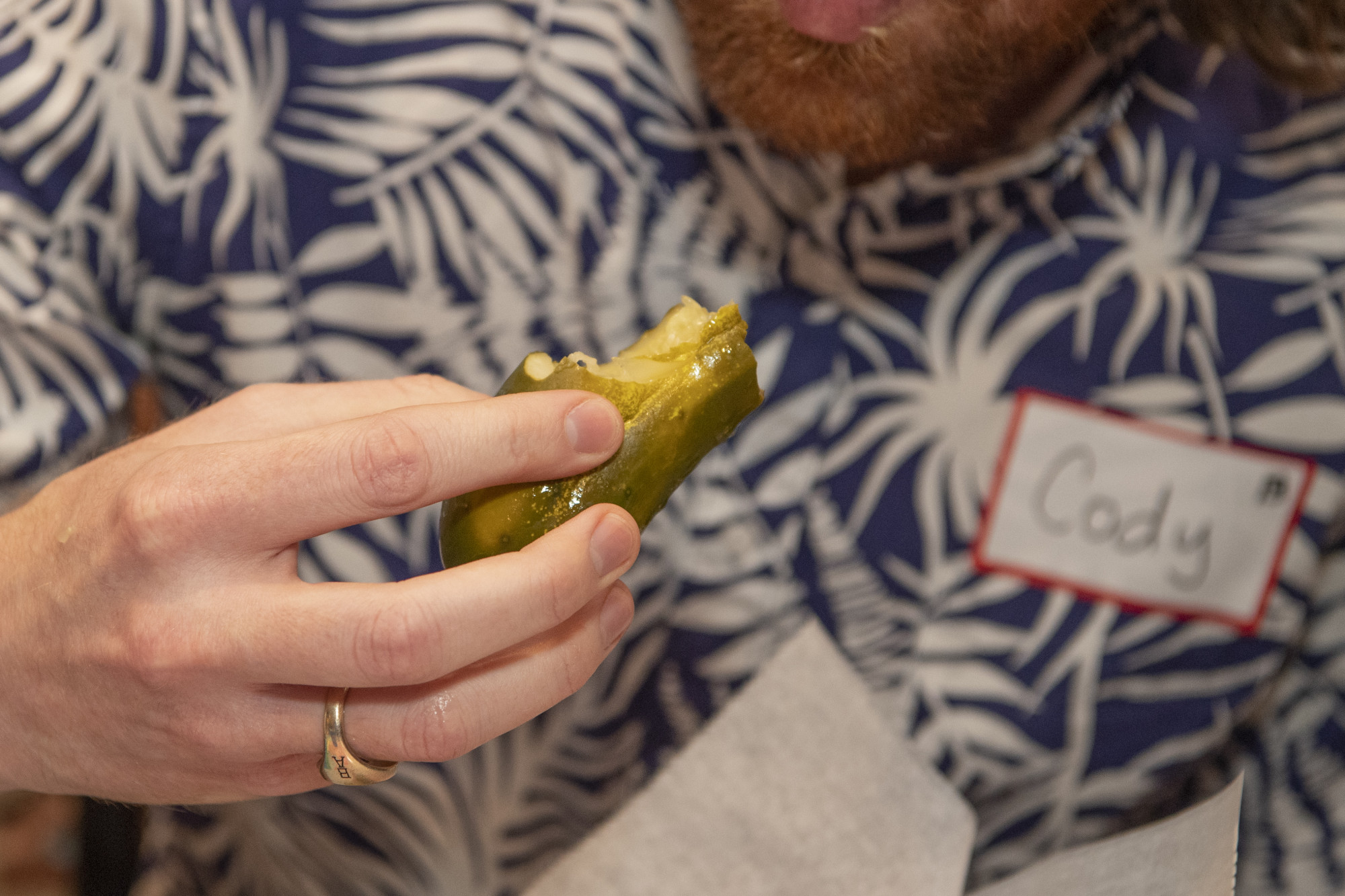 Cody Sigmon eats a pickel in the first heat of the Annual Pickel Eating competition at Bagel Street Deli on March 18, 2022.

In the second heat, Mike Fitzpatrick, a senior studying nursing and a first-time Pickle Fest competitor, took a commanding lead in the first half of the heat, eating at a pace of one pickle per minute. With eight pickles down, a minute left and half a pickle in his hand, Fitzpatrick took a deep breath and focused on the remnants of the pickle. It was the only thing between him and a first-place score.

“I just had to get that last pickle down,” Fitzpatrick said. “What’s the point of having half a pickle on your plate?”

The crowd roared the loudest it had all afternoon as Fitzpatrick frantically fit the last bite of his ninth pickle into his mouth. Fitzpatrick had taken the lead, and in doing so, tasked his future competitors with the challenge of reaching double digits.

At the challenge’s halfway point, the crowd began to stir in anticipation of the remaining rounds. The third round of the competition began soon after, but Annie Spies did not allow for much competition.

Spies, a junior studying visual communications and multimedia, remained miles ahead of her fellow participants and maintained a minimum two-pickle lead throughout the majority of the heat.

“I had a good feeling I wouldn't upset myself because I usually consume pickles a lot,” Spies said.

Spies consumed nine pickles — enough to tie Fitzpatrick. After her final score was announced, Spies said she was very pleased to see the results, and she was surprised by her success. It wasn’t enough to secure first place, but it was an impressive feat.

The participants of the fourth and final heat were eager to surpass both Spies and Fitzpatrick. Their dedication was evident throughout the heat, as just under half of the participants reached their fifth pickle — an accomplishment unique to this round.

Among those determined participants was Dakota Dement, a senior studying international business, one of the few returning Pickle Fest competitors.

Dement consistently stayed at least one pickle ahead of the other challengers, and he reached six pickles near the halfway mark. It appeared Dement would easily prevail over the previous record of nine pickles, but as the round reached its final minutes, Dement’s eating pace slowed.

As time expired on the clock, Dement downed his final pickle. He too, had finished with a total of nine pickles eaten. Pickle Fest ended in a three-way tie, a never before seen result in Pickle Fest history, and the winner had not yet been determined.

The competition carried on through a series of trivia questions, although the tiebreaker would be delayed by five days. The showdown took place March 24 to decide the winner. Bagel Street hosted the tie-breaker in its dining room, the scene of the initial competition nearly one week earlier.

In the end, Spies prevailed with a score of five, followed by Fitzpatrick with three and Dement with two.

The revenue from the event totaled $225, which Bagel Street Deli matched, creating a grand total of $450 toward a charity of Spies' choice.

Spies said she was honored to win and excited to see her custom bagel posted on the wall. Though she is not yet sure what charity will be the benefactor for the event, she is happy to see the money go to an organization that needs it.

Though she was satisfied with her Pickle Fest experience, Spies concluded that it's much easier to observe the competition than compete, and it is an opportunity that should not be turned away.

“Everyone should try it,” Spies said. “It's really fun, it's a good cause, and Bagel Street is an awesome local business, and everyone should support it.”