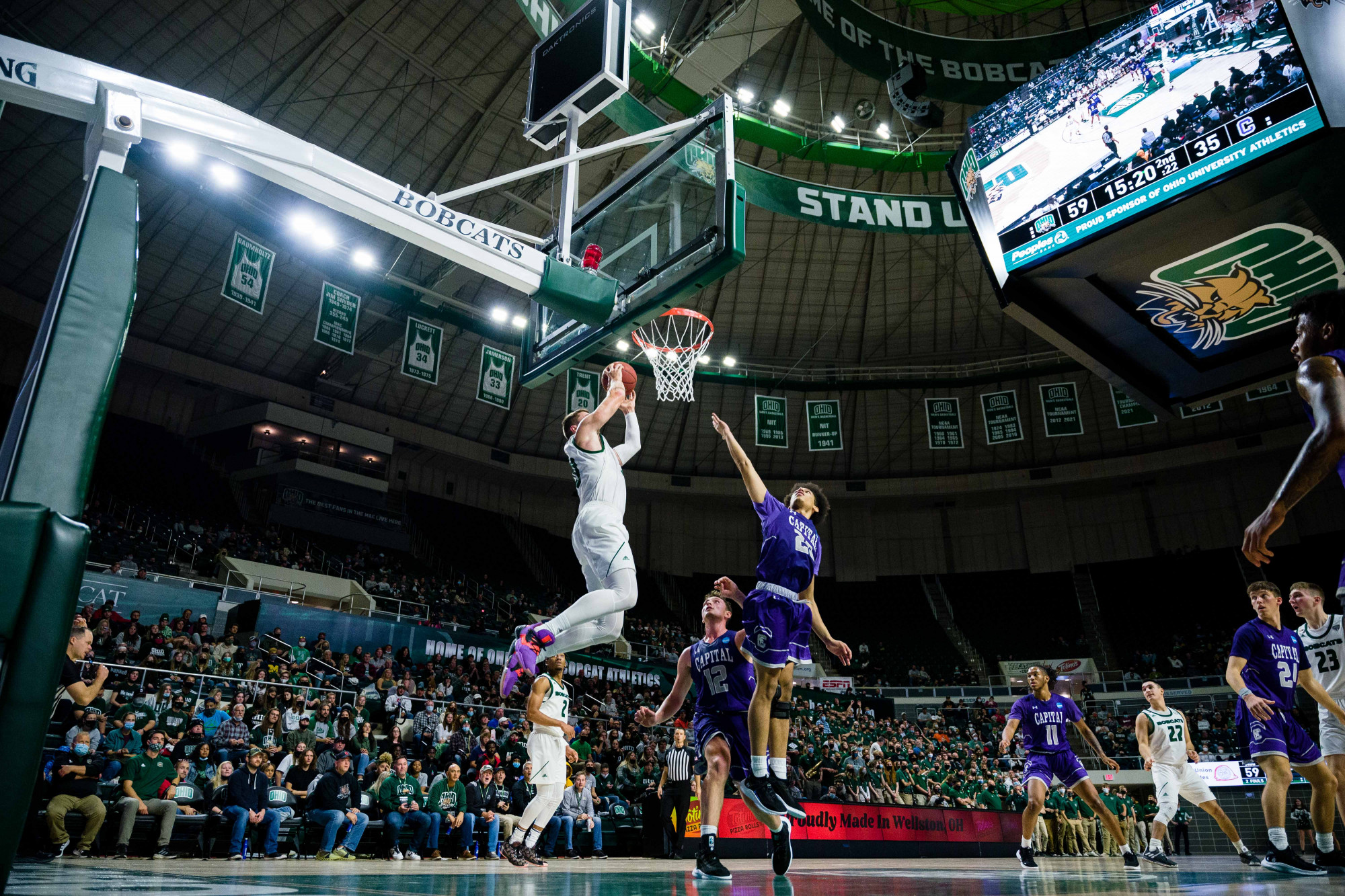 Ohio forward Jason Carter (30) continues with a dunk attempt after the clock was stopped for a foul during an exhibition basketball game against Capital University at Convocation Center in Athens, Ohio, Saturday, Nov. 6, 2021.

Best of the Year

The past year has brought plenty of unforgettable moments for Ohio athletics. As 2021 winds down, The Post decided to step back and take a look at some of the best moments from the calendar year.

Ohio’s men’s basketball team notched its first win in the NCAA Tournament since 2012, and the women’s team overcame a double-digit deficit in two minutes. The football team won the Battle of the Bricks for the first time in four years, and two Bobcats etched their names into Ohio lore.

There were many bright spots for Ohio in 2021, but we filtered them down to the top five. Here are the five best moments from Ohio’s 2021 athletic year:

After a dominant run in the Mid-American Conference Tournament, Ohio earned its first bid to the NCAA Tournament since 2012. It was selected as the No. 13 seed in the West Region, and it was picked to face No. 4 seeded Virginia in the first round.

Whatever the odds were, the Bobcats didn’t care. They upset the Cavaliers with a 62-58 victory and put the nation on notice. After trailing by a point at halftime, the Bobcats rallied. Ben Vander Plas scored 10 points in just over three minutes to give the Bobcats a lead they held for the remainder of the game.

The Bobcats’ luck ran out after they fell to Creighton in the second round, but they had made their mark. They’d dethroned the reigning national champions after not appearing in the NCAA Tournament for nine years.

After battling back from deficits all game, Ohio found itself in another hole after Buffalo opened the fourth quarter with a 15-0 run. Ohio whittled away at the score but still found itself down by 11 with under two minutes to play.

That was, until the Bobcats went on a 16-2 run in the final two minutes. Ohio got the go-ahead when Kaylee Bambule sank a 3-pointer — her only shot of the game — with 11.4 seconds left on the clock. Cece Hooks closed the game out with a layup for an 84-81 win.

Ohio’s season had gone awry well before it hosted Miami for the 97th Battle of the Bricks. It’d dropped seven games and its only win up to that point had been against Akron in early October. What’s more, it hadn’t beaten Miami since 2017.

But the Bobcats bucked that trend after they outlasted the RedHawks 35-33 at Peden Stadium. Quarterback Kurtis Rourke, who’d battled inconsistency through the first half of Ohio’s schedule, completed 23-of-32 passes for 289 yards and three touchdowns. The Bobcats’ defense held back the RedHawks’ rushing corps to just 77 yards and forced quarterback Brett Gabbert to do the heavy lifting.

In a season full of more lows than highs, a rivalry win was a bright spot for Ohio.

Joe Rock pitched perhaps the best game of his collegiate career in Ohio’s 2021 home opener. The leftie pitched seven innings on the mound against Morehead State, striking out six and walking two. Behind Rock’s pitching, Ohio snatched the lead easily and dominated Morehead State 6-0 in the first game of a doubleheader.

The game was Rock’s first no-hitter of his college career as well as his last. He was drafted by the Colorado Rockies following the end of the season.

Wexell’s ninth shutout of the season

Ohio ended its regular season with a draw against Kent State — losing the regular season MAC title in the process — but Sam Wexell had good reason to celebrate. The goalkeeper recorded three saves for her ninth shutout of the season as well as her sixth against conference opponents.

Wexell’s nine shutouts are the second-most in a single season in program history. She eclipsed Michelle Meglaughlin, who’d held the second place spot with eight shutouts since 2004.