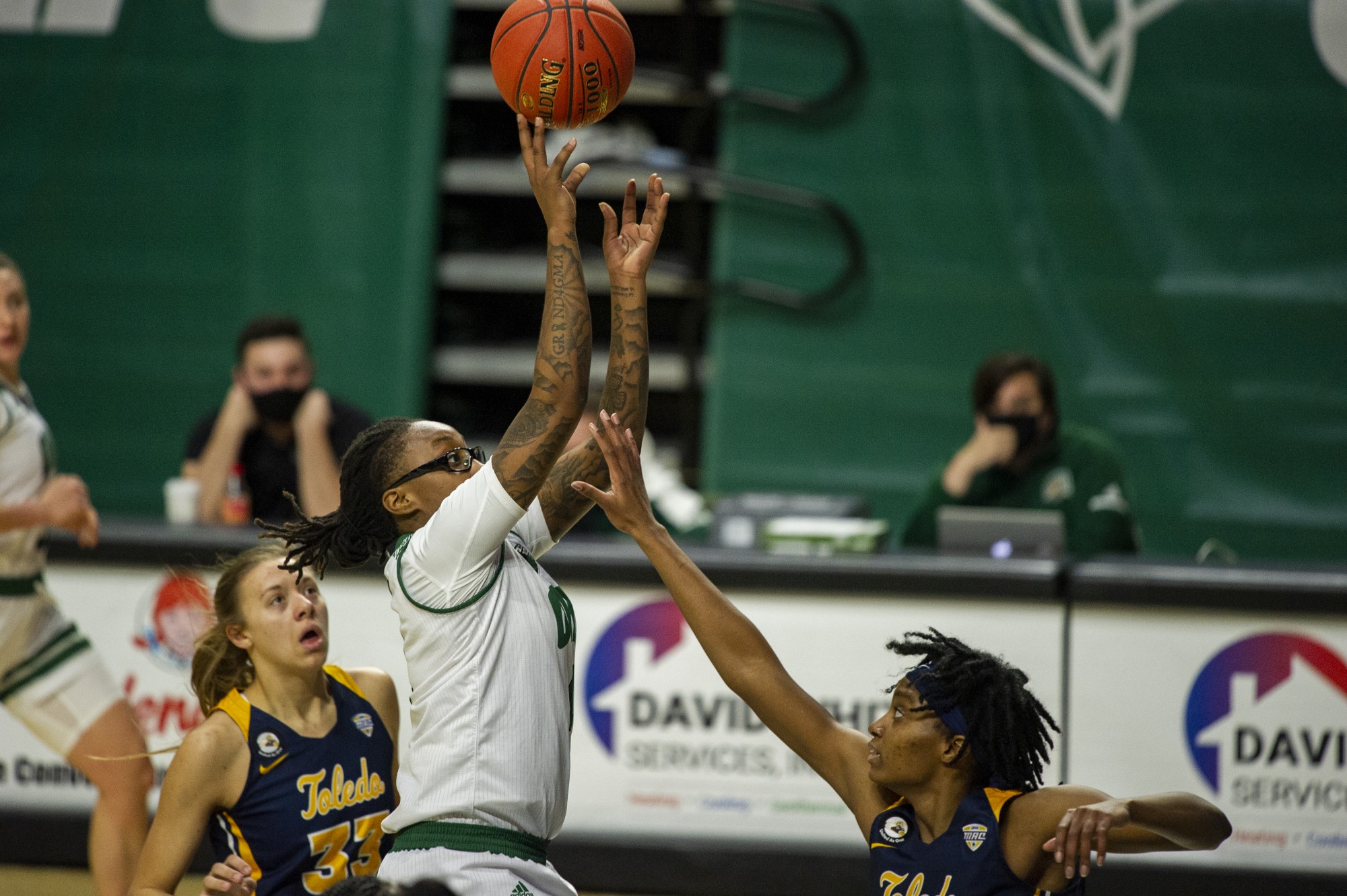 Ohio University's, Erica Johnson (4) goes up for a quick shot with heavy pressure from The University of Toledo's, Hallie Idowu (35) and Sammi Mikonowicz (33), during the home game on Saturday, Jan. 9, 2021 in Athens, Ohio.

Women's Basketball: Numbers to know from Ohio's 71-67 loss at Akron

Ohio returned to the floor for the first time since Feb. 13 with a close 71-67 loss at Akron on Wednesday night. The Bobcats’ last three games were canceled due to COVID-19 issues within the program heading into the loss at James A. Rhodes Arena. Ohio also played without key starter Caitlyn Kroll, which only made the loss more painful.

The Bobcats now only have one game remaining in the regular season before heading to the Mid-American Conference Tournament on March 10. The Bobcats (12-7, 10-6 MAC) are currently seeded third in the MAC before playing Miami on Saturday.

Here are the numbers to know from Ohio’s 71-67 loss at Akron:

Last time CeCe Hooks was in Akron, she scored a school-record 41 points. This time, she scored 33. Hooks returned to the floor exactly how she left it before Ohio’s long hiatus with an added 10 rebounds and seven steals. She added 11 points from free throws, going 11-for-13 from the line. She also scored 31 in the last meeting between the two teams.

Ohio shot poorly Wednesday night against the Zips. The Bobcats shot just 35.4% from the field and only 20% from the 3-point line. Kaylee Bambule made just two of eight attempts from beyond the arc, and Madi Mace struggled as well, going 1-for-5 on her 3-point attempts.

Despite out-rebounding Akron by 10, the Bobcats were not able to shoot well enough to win. They also turned the ball over 17 times. Both of these factors might have something to do with not playing a game for over two weeks.

Ohio is sitting in a decent position at third in the MAC standings heading into the final weekend of regular play. The Bobcats have already clinched a spot in the tournament, so now all that’s left to do is wait for the seeding. If Ohio seeds toward the top of the bracket, it will have some interesting potential matchups against Buffalo or Ball State. The Bobcats beat each team this season once.

While there is no bye in consideration for the tournament this year, a spot in the top four would surely be favorable to being on the bottom for Ohio.