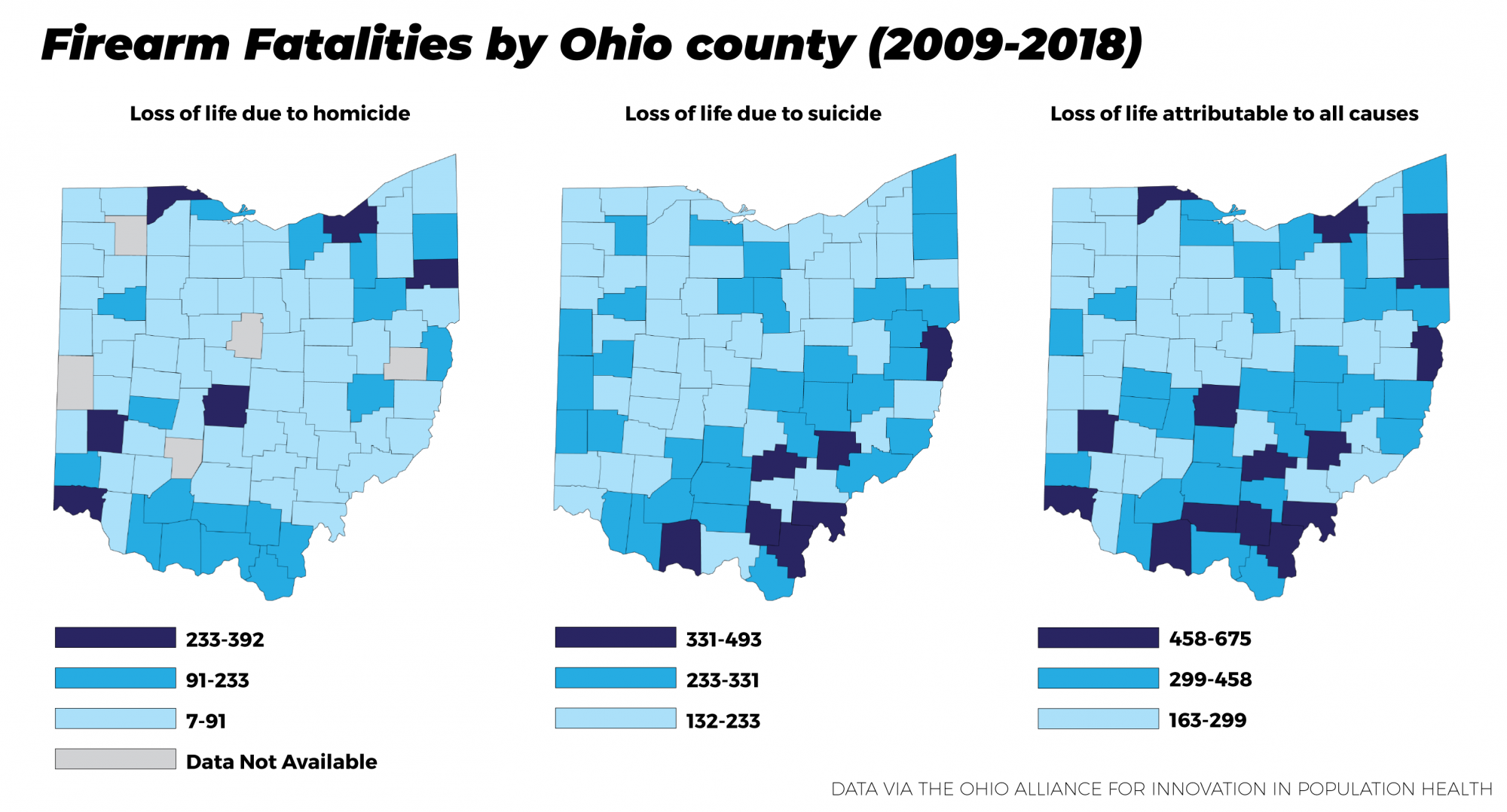 D ayton’s Oregon District in 2019. Cincinnati’s Fifth Third Center in 2018. Pike County in 2016. Chardon High School in 2012. Ohio has a history with gun violence, and 2020 may be the year the state government changes gun ownership laws.

The debate between the right to bear arms and whether the government has the right to limit and restrict the usage of firearms hit a boiling point in the past decade. With the rise of mass shootings around the U.S., many Americans are searching for solutions to gun violence while many others, gun owners in particular, are fighting to protect their second amendment rights.

Ohioans felt the painful sting of mass shootings more than once this decade. While these tragedies may be the most visible in the news and everyday life, far more lives are lost through the use of a gun by suicide or homicide every year.

At the state and local levels of Ohio’s government, steps are being taken to respond to mass shootings either with gun control proposals or vocal opposition to any such legislation.

Crime often gets boiled down to a statistic, but the victims of firearm related deaths are just like the victims of any other crime or tragedy. Each death or injury is a person with a story or has a family who is in mourning.

It is extremely difficult to determine the number of firearms in the state because Ohio, like most, doesn't require gun owners to register their firearms. In fact, only four states and the District of Columbia mandate registration of some or all firearms.

CBS News was able to accomplish this study by combining data from the Bureau of Alcohol, Tobacco, Firearms and Explosives National Firearms Registration and Transfer Record, along with data from the 2013 U.S. Census.

Between 2009 and 2018, about 13,000 Ohioans lost their lives by suicide, homicide or accident while using a firearm, according to a study done by the Ohio Alliance for Innovation and Public Health, or the OAIPH.

The study points out that counties containing Ohio’s largest cities and counties in southern and eastern Ohio see the largest rates of firearm deaths per 100,000 residents. Rates of homicides were generally higher in counties with big cities while rates of suicides were higher in Southeastern Ohio.

Adams County had the highest overall rate in the region and in the state with 20.23 firearm deaths per 100,000 residents while Athens had one of the lowest with 8.18. This study happened before two of the more recent mass shootings in Dayton and Cincinnati.

According to the Gun Violence Archive, or GVA, a mass shooting is when four or more people are shot or killed, not including the perpetrator. GVA, which is a non-profit that catalogs every incident of gun violence in the United States, said Ohio had 64 mass shootings with a total of 77 people killed and 257 injured between 2014 and 2018.

Toby Hoover, the founder and former director of the Ohio Coalition Against Gun Violence and a victim of gun violence, said she has been waiting a long time for gun violence to be addressed. She said 2020 may finally be the year.

“You go through a lot of years and a lot of elections, and nobody ever mentions (gun violence), but we’ve finally reached a point where this is a top issue,” Hoover said.

“Do Something” was the infamous chant of an angry crowd at a vigil in Dayton in response to a speech given by Ohio Gov. Mike DeWine.

Within days of the mass shooting in Dayton’s Oregon District, which killed 10 people, including the shooter, the chant became a rallying cry, as there was an increase in activism both in Dayton and around Ohio, Nan Whaley, Dayton’s mayor, said.

Since then, Gov. DeWine has helped to draft STRONG Ohio, a Senate bill aimed at curbing gun violence through moderate proposals. The bill is sponsored by Senator Matt Dolan, R-Chagrin Falls.

Dan Tierney, DeWine’s press secretary, said the goal of this bill is to create a set of proposals that are unique to Ohio and build upon existing systems, such as Ohio’s pink slip laws and background check system.

Tierney said the bill is hoping to address firearm sales that happen through private retailers, which he says make up about 20% of sales compared to the other 80%, which are through federal dealers.

“It's not as far as I’d like to go,” Whaley said. “I think the real measure would be having universal background checks and a stronger red flag law, but I know it is a step in the right direction.”

Whaley has been working as a partner with DeWine on the plan since the Dayton mass shooting. While she supports STRONG Ohio and believes it is a good first step, the mayor also is supporting a ballot-proposed ballot initiative for 2021, which would institute universal background checks.

Hoover said her organization is in favor of universal background checks, like those proposed in the ballot initiative, but is opposed to STRONG Ohio because she said it does not do enough.

The ballot initiative is being proposed by Ohioans for Gun Safety, a grassroots gun control activism group that would require an unlicensed person wishing to sell or transfer a firearm to another person to conduct the transfer through a licensed gun dealer running a background check.

Whaley believes that both proposals will be an “uphill battle,” either getting the majority of Ohioans to vote for the ballot initiative, or getting the Republican-controlled state legislature to support the bill.

“I do have hope because it is one of the governor’s number one priorities,” Whaley said.

Gun control has always been a divisive issue in the country, so it's not surprising that many in Ohio who feel strongly about their right to bear arms are working to try and stop any efforts to restrict gun ownership. The largest response to these proposals actually comes at the local level among some of Ohio’s 88 counties.

Recently, counties like Vinton, Meigs, Pike and Jackson, among others in the state, have declared themselves Second Amendment sanctuaries through resolutions. Even though they hold no legal significance, the resolutions are clearly a response to recent efforts to pass gun control.

Hoover said resolutions like this are dangerous because there is the potential of a county prosecutor or sherriff choosing not to take action.

“You could end up with loss of life because they didn’t enforce something,” Hoover said.

Eliason said the reasoning behind passing it was to get ahead of other proposals that were being brought to the commissioners from citizens. They wanted to get ahead of these and declare their support for the second amendment in their own way. Ohio is a Dillon Rule State, meaning counties do not have any power, except those the state legislature grants to it, Eliason said.

“Declaring the county a second amendment sanctuary has no purpose or ability to be in effect,” Eliason said. “We don’t have any ability to tell the sheriff's department what laws to enforce or the county prosecutor what laws to prosecute.”