W hen rainy weather ruined his family vacation in 2008, Robert (Lenie) Holbrook decided to ask a local activities director what to do. It was then when he first learned about geocaching.

“We only (found) four (caches), but I fell in love with it,” Holbrook said. “I literally came home and the very next day bought two receivers. I started doing it within a week.”

Geocaching is similar to a scavenger hunt and is designed for people of all ages, Holbrook, an associate professor of management systems for Ohio University’s College of Business, said.

Originally known as “Great American GPS Stash Hunt,” Geocaching began in 2000, according to its website. People can navigate to a set of GPS coordinates using the Geocaching app or a GPS receiver, such as a handheld Garmin, to try and find a cache hidden at the location.

When the cache is found, inside of the container is usually a paper log, which tracks who has recently found the cache, along with a few “knick knacks.”

“And the rule has always been, if you take something, you're supposed to put something back,” Holbrook said. 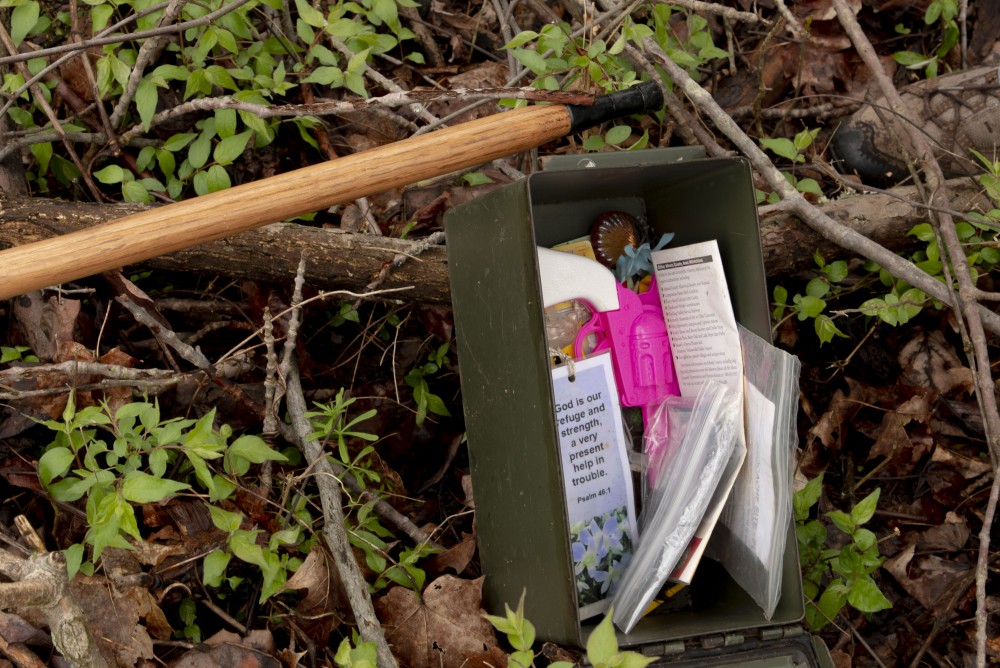 The displayed contents of a found geocache near the Ridges Nature Preserve area on April 12, 2019. 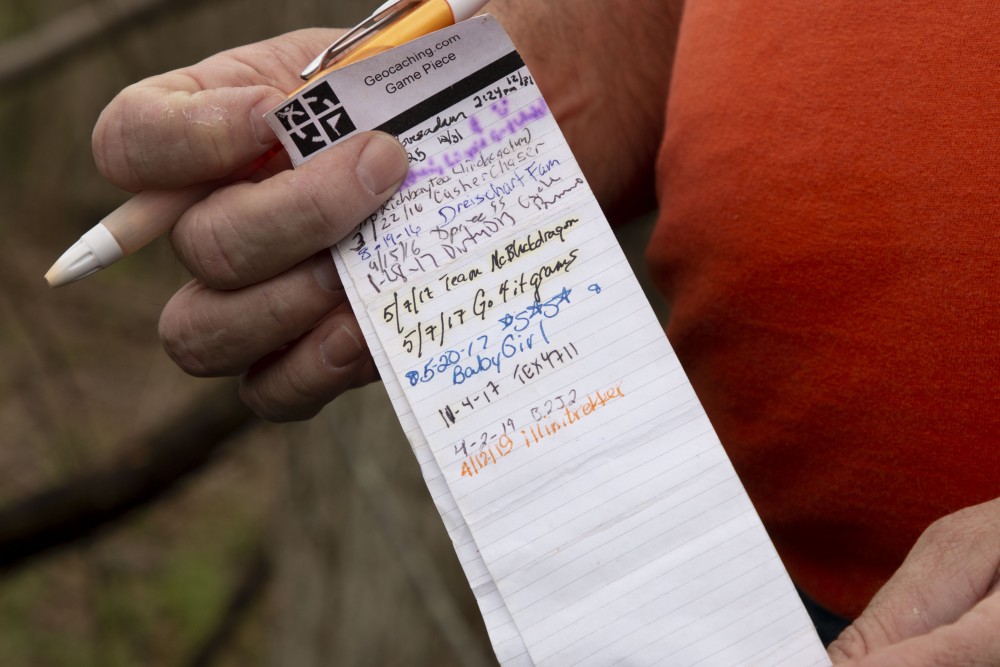 Robert Holbrook displays a cache’s log, the list kept inside the cache that lets participants confirm that they’ve successfully found it on April 12, 2019. 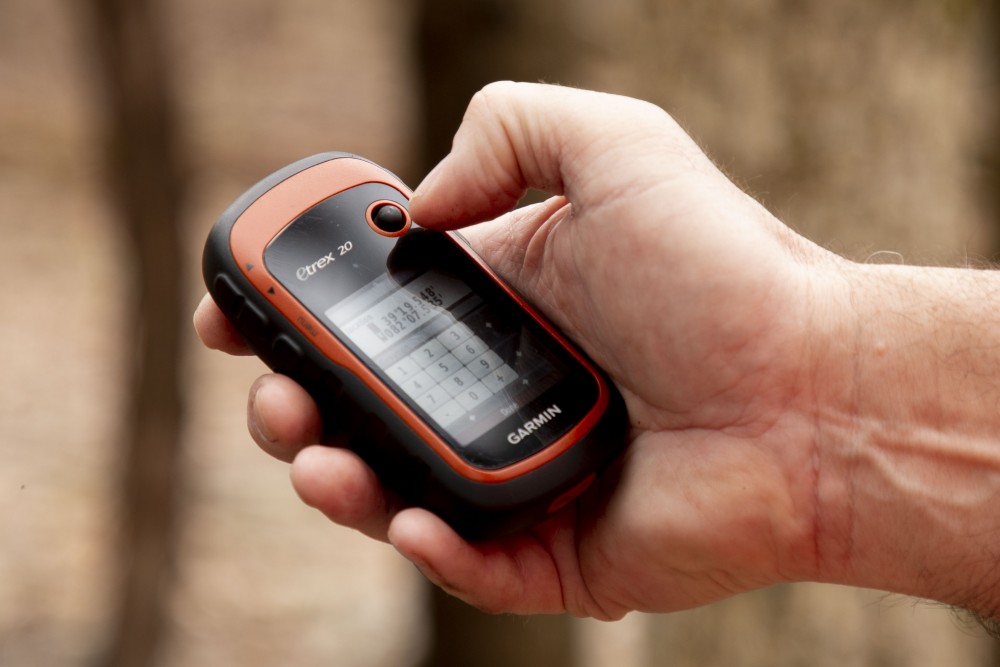 A handheld GPS unit commonly used by Geocachers is programmed with the coordinates of a cache on April 12, 2019.

For a number of years, Holbrook was the highest ranked “cacher” in southeast Ohio, he said.

Holbrook, also known as “illinitrekker” among other cachers, has found over 10,000 geocaches. About five years ago, he decided to retire from the hunt because it was getting to be too competitive, he said. Having a higher ranking in the area made his profile stand out to others, and a lot of criticism arose.

“I just couldn't handle the comments that were being made and criticisms and things like that,” Holbrook said. “One guy stole all of my caches in a two-day period that I put out in the area, because he was mad.”

Because of this, Holbrook estimates that he finds about 100 caches a year now, and sometimes goes months without geocaching.

“I just don't do any of the area anymore, and that's simply because I just don't want people around here to know that I'm actively caching,” he said. “Then the sniping starts all over again.”

Staci Nungester, also known as “wallacenuggets,” is a geocacher from Murray City, located in Hocking County about 18 miles from Athens. She celebrated her third anniversary caching with her family in April.

A friend of hers had been occasionally posting on social media about geocaching, so she decided to look into the hobby some more.

“We asked him questions and then downloaded the app and got started,” Nungester said. “We’ve been learning as we go.”

Even though Nungester splits her time between Athens and northwest Ohio every other week, traveling doesn’t stop her from hunting for a cache.

“There are geocaches literally everywhere that you could imagine,” she said. “If you were some place and you see something that makes you think, ‘Wow, that’s pretty cool,’ there’s probably a geocache nearby.”

One of Nungester’s most memorable geocache finds was along the Hockhocking Adena Bikeway.

“If you were some place and you see something that makes you think, ‘Wow, that’s pretty cool,’ there’s probably a geocache nearby.”-Staci Nungester, local geocacher

“There’s one with the name ‘Cousin Itt,’” she said. “When you find it, it’s kind of tongue and cheek.”

While the name was memorable, so was the day in general. Geocaching takes people to places they would not normally go, she said.

“It was dusk, and when we turned around, there were millions of lightning bugs lighting up this field,” she said. “So, we just stood there and enjoyed the view and enjoyed the moment, and so something simple like that becomes memorable.”

Sam Elias, a freshman studying business pre-law, has geocached before but not as often as she would like.

“I think it’s cool seeing different parts of places I never would’ve been to otherwise,” she said.

Katie Hendrickson, known as “ktannieh,” lives in the Athens area and placed the Cousin Itt cache back in 2013 as a part of a series she and some friends wanted to do.

The series she chose was the Addams Family, and she created different geocaches for each character to make them unique.

“The Cousin Itt cache was especially fun because I used the top of a mop on the outside and then put sunglasses over the top of it, and then put the geocache container inside the mop and then hung it from a tree,” she said. “So it kind of looks like Cousin Itt's hair and sunglasses.”

Hendrickson has hid 22 caches over the years, according to her Geocaching profile.

Holbrook’s geocaching friends were talking to him one day about a geotrail they recently completed in West Virginia and Holbrook soon became interested, he said. Geotrails are a series of related caches placed within a community, and when you find them all, there’s a riddle or puzzle that signifies all the caches have been found.

He drove to West Virginia to try out the trail for himself. Completing half the caches in the morning and then some later with the owner, he drove home that night thinking of ways to do something similar in Athens.

In 2010, Holbrook partnered with the Athens County Visitors Bureau to create Ohio’s first geotrail. At the time, Holbrook was teaching a creativity class in the College of Business, and he had his students design the trail as a class project. Holbrook has helped to host trails in other areas of Ohio and has even held workshops for those who are interested in hosting their own.

For the first time in five years, Holbrook is teaching the class again. This time the class is helping to redesign a geotrail that one of his classes previously designed in Coschocton County, he said.

“I will go up, and it’ll be put in place sometime toward the end of the summer,” Holbrook said. “We'll launch that in the fall and take the old trail away.”

For Holbrook, retiring does not mean he has stopped altogether. He still geocaches, just not in the Athens area. His goal is to find a geocache in all of the 50 states, he said.

“If I've got a trip to take, the next thing is to pull up the map and see what's there,” Holbrook said “I plan trips around the cache and not caching around trips.”

This summer, Holbrook is attending a conference in Boston. There are six states nearby that he has not cached in but plans to take advantage of the opportunity.

“I'm going to go two days early (to) rent a car and quickly drive around all of the states,” Holbrook said.

When caching in the Athens area, Nungester said there is a lot of “bushwacking” due to the terrain and sometimes finding a simple cache might lead to frustration.

“At the time you might be cussing that geocacher who placed that cache there because you're sweating and you're hot and you're getting stuck with thorns and you're bleeding and you're bug-bitten and it's horrible in the moment,” she said. “But once you're cleaned up and once the scratches and the bug bites are healed … you end up looking back on those ones fondly because it was such an accomplishment to find that cache and to get there.”