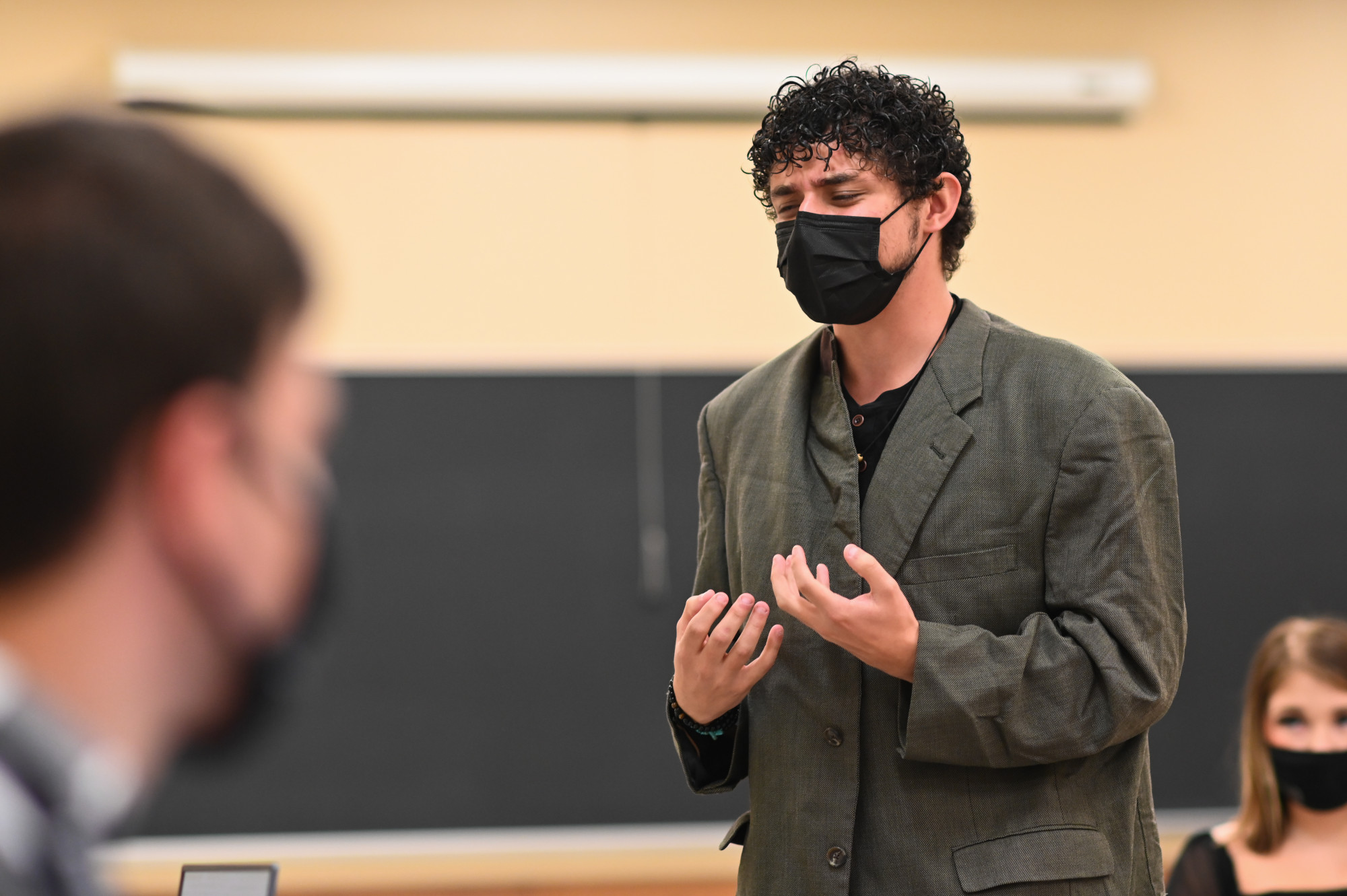 Sergio Morales-Blazquez practices his lines as the character John McAdams on Nov. 14, 2021 for the upcoming play titled "The Laramie Project" that will be performed by Ohio Universitiy's Lost Flamingo Theatre Company.

Over the past year, Ohio University and the individual programming staffs have worked hard to bring fun, engaging events to Athens for students to maintain a sense of normalcy during the coronavirus pandemic.

“We were cautious going into this year as the entire university moved back to in person,” Andrew Holzaepfel, senior associate director for student activities, said.

In the spring, there was much more of an emphasis on virtual programming. There were consistent events like the Tuesday Night Laughs and Live from HOME, and there were also random events distributed throughout the semester like the Empire Wild show and the Aizuri Quartet.

“We just kind of felt like we needed to find ways for people to find engagement while they were either not on campus, or those that were on campus that had very little to do in person,” Holzaepfel said. “So we really just had a little bit of everything, from comedy, to music, to classical, to off-Broadway shows.”

But as Holzaepfel worked with the rest of the programming groups to create exciting events despite the coronavirus pandemic, there were also a lot of cancellations and reschedulings to factor in.

As students returned to campus for fall semester, the programming staff did their best to secure in-person events in addition to ones rescheduled. For example, they found a time to reschedule the FINNEAS performance that was supposed to happen before the coronavirus pandemic, but they also had musicals and even a series called Concerts on the Green, where musical groups, including the Marching 110, would perform on College Green.

In addition to their regularly scheduled events, there were also events added on for specific university weekends, such as comedian Joel McHale for Parents’ Weekend and actor and musician Stephen Kramer Glickman for Dad's Weekend.

Corbin Marsh, assistant director of programming, said the series has seen a much smaller number of audience members than usual. With the reschedulings, there have also been a lot more no-shows with the audiences than they typically have, which Marsh said has been weird to see with the already enforced reduced capacity.

In addition to the Performing Arts & Concert Series events, another group called the University Program Council, or UPC, has stepped in to help with programming as well. UPC is a volunteer board of students who work to bring world-class programs to OU’s campus.

“Last spring we didn’t really didn’t do much because of COVID,” Abby Spencer, a senior studying sociology criminology and psychology, said.

However, Spencer, who is the university events vice chair for UPC, said in the fall they tried to make up for lost time by hosting events like the Welcome Weekend Cash Cash concert, a drag show, a brunch on Parents’ Weekend, a casino on Dad’s Weekend and a weekly event called Flavor every Wednesday with different kinds of free food for everyone.

Because of the coronavirus, UPC had to cancel the annual Throwback Thursday concert and Bachelor Night events, which are two of their biggest programming events each year. However, they’re excited to bring them back in the spring and to announce who will be performing.

“I think it’s very fun,” Spencer said. “We are funded by the university 100%. They give us money and we are able to put on all these events for students for free. I think it’s really cool because not many places get to do some of that kind of stuff. To me, it’s rewarding.”

UPC isn’t the only one working to move forward after the coronavirus pandemic. The Performing Arts & Concert Series announced a huge portion of the shows scheduled for the spring, and everyone on the staff is really looking forward to it.

There are more announcements to come, and Holzaepfel said there are going to be a lot of opportunities for students to be involved.

“Obviously it’s not been what we wanted and we really just had to pivot last academic year and we did what we could,” Holzaepfel said. “I’m happy that we’re approaching it slowly and trying to be safe.”