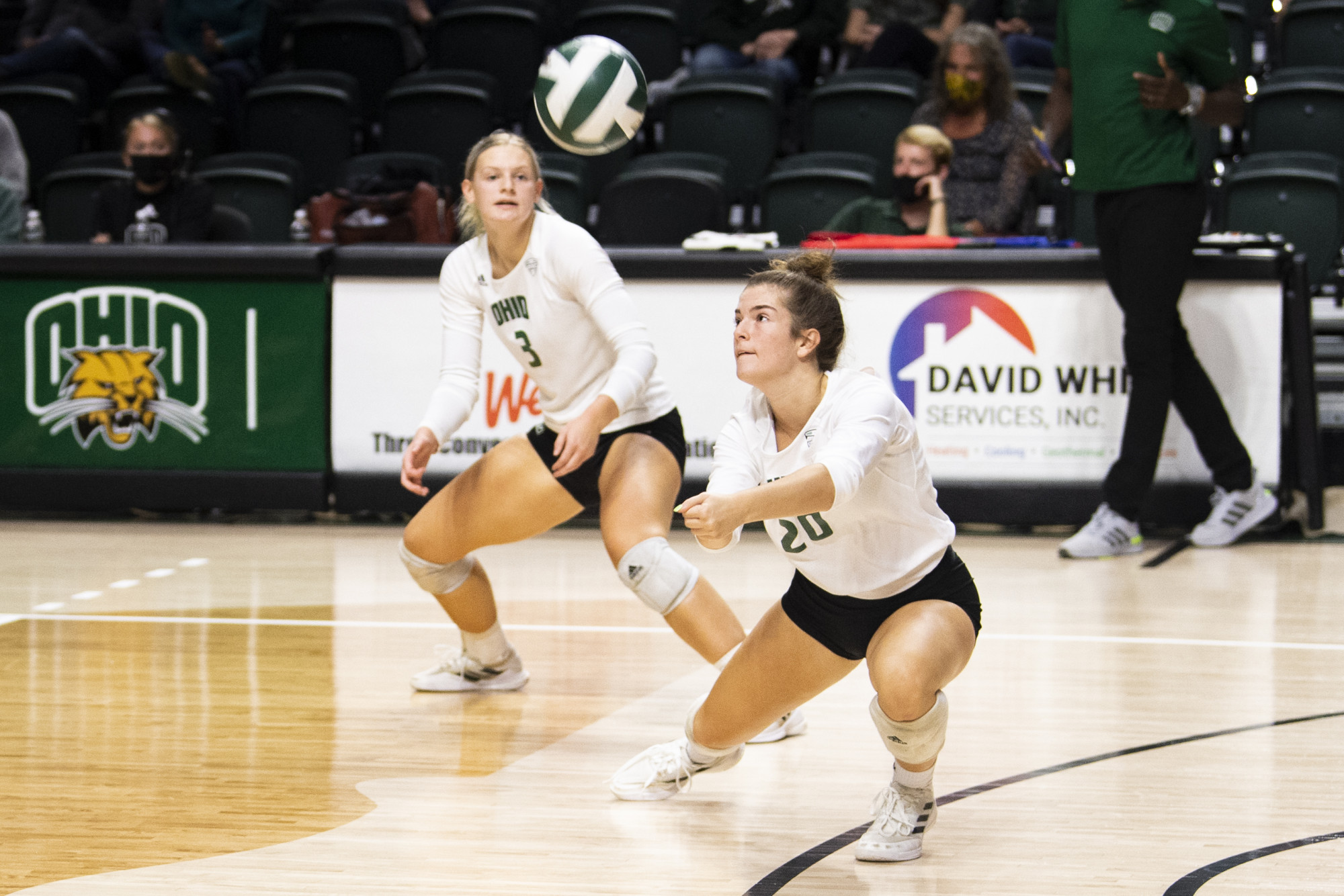 Volleyball: Ohio turned a season around through its strong bond

The sun was setting over Lake Hope State Park at the end of Ohio’s team retreat in August ahead of the 2021 season. It was a retreat the team needed. 2021 was gearing up to be a year of change for Ohio. It was the first season under coach Geoff Carlston, who had been hired in July.

“I was like, ‘Oh my gosh, we’re living in a movie right now,‘“ fifth year Maggie Nedoma said. “But just like watching all of us and then our assistant coaches started jumping in too.”

For the first few weeks, the Bobcats needed to hold onto that faith. They’d started off the season with 11 consecutive losses, due in part to a difficult nonconference schedule that led them across the Midwest. They traveled to cities as close as Columbus and as far as Manhattan, Kansas, to prepare for their Mid-American Conference schedule. However, the Bobcats were unable to scrape together a win in their first five weeks of the season.

Ohio hosted its first home match in mid-September for a series against Toledo. A little taste of The Convo proved to be all Ohio needed to return to its winning ways. It swept Toledo on Sept. 24 for its first win of the season.

A victory was all the Bobcats needed to alter the course of their season. The win over the Rockets provided the Bobcats with a new sense of energy.

“The next week of practice was so aggressive,” Nedoma said. “We all were in there like, ‘We got one, now let’s see how many more we can get.’”

The Bobcats’ newfound vigor in practice paid off. They created a raw attack fueled by an eagerness to win, and they became a new team on the court compared to how they played in their nonconference schedule. Before MAC play began, Ohio was unable to win a match if it went beyond three sets.

That changed after the Bobcats began their MAC schedule.

Ohio only lost one match between Oct. 9 and Nov. 6. Of the 10 matches played in that span of time, seven went longer than three sets. But of all the wins, there was one that held more weight than the others. Its 3-1 win over Miami on Nov. 5 clinched Ohio a spot in the MAC Tournament.

“We just proved that we deserve to be there, and that it wasn’t luck or given to us,” Nedoma said. “We proved to everybody and we proved to ourselves that we are a very good volleyball team.”

Ohio had to face the hardest part of its schedule before the MAC tournament, though. It had three more matches in its regular season schedule, two of which were its final home matches against reigning-MAC East champion Bowling Green. Ohio hadn’t beaten Bowling Green since 2015. The homestretch was going to require Ohio to lock in more than any other match.

The Falcons bested the Bobcats 3-0 in their first match on Nov. 12 despite the Bobcats running the score close. Ohio was at a disadvantage before its final match in The Convo.

Senior Day was bittersweet for Ohio. It was losing some of its best and most experienced players such as Nedoma. Emotions ran high in The Convo before the ball had even crossed the net.

The Bobcats ended up having more to celebrate that day beyond what was already planned. They defeated the Falcons 3-2 in their largest upset of the season. Everything they had been working on all year came to fruition on Senior Day.

“I was just so happy and so proud for our seniors, for our whole team,” Ohio coach Geoff Carlston said.

With their biggest win of the regular season under their belts, the Bobcats carried a confidence boost into the MAC Tournament. They easily swept Northern Illinois in the quarterfinals, and advanced to the MAC Tournament semifinals for the second time in two seasons.

“The team believed we could win this tournament and so did I,” Carlston said.

Ohio’s run in the postseason ended as quickly as it began, though. It faced Bowling Green for the second time in under two weeks, and there was no win this time. Bowling Green stomped Ohio 3-1 in the semifinals and ended its season.

Thinking back to the Bobcats’ day at Lake Hope, Nedoma reflected on the ideals her coaches instilled into her and her teammates: be grateful, be vulnerable and be selfless.

“Sometimes life goes by so fast, but that was a moment where I felt like time was standing still,“ Nedoma said.

The sun may have set on another season for Ohio, but the memories and bonds they created stay strong.