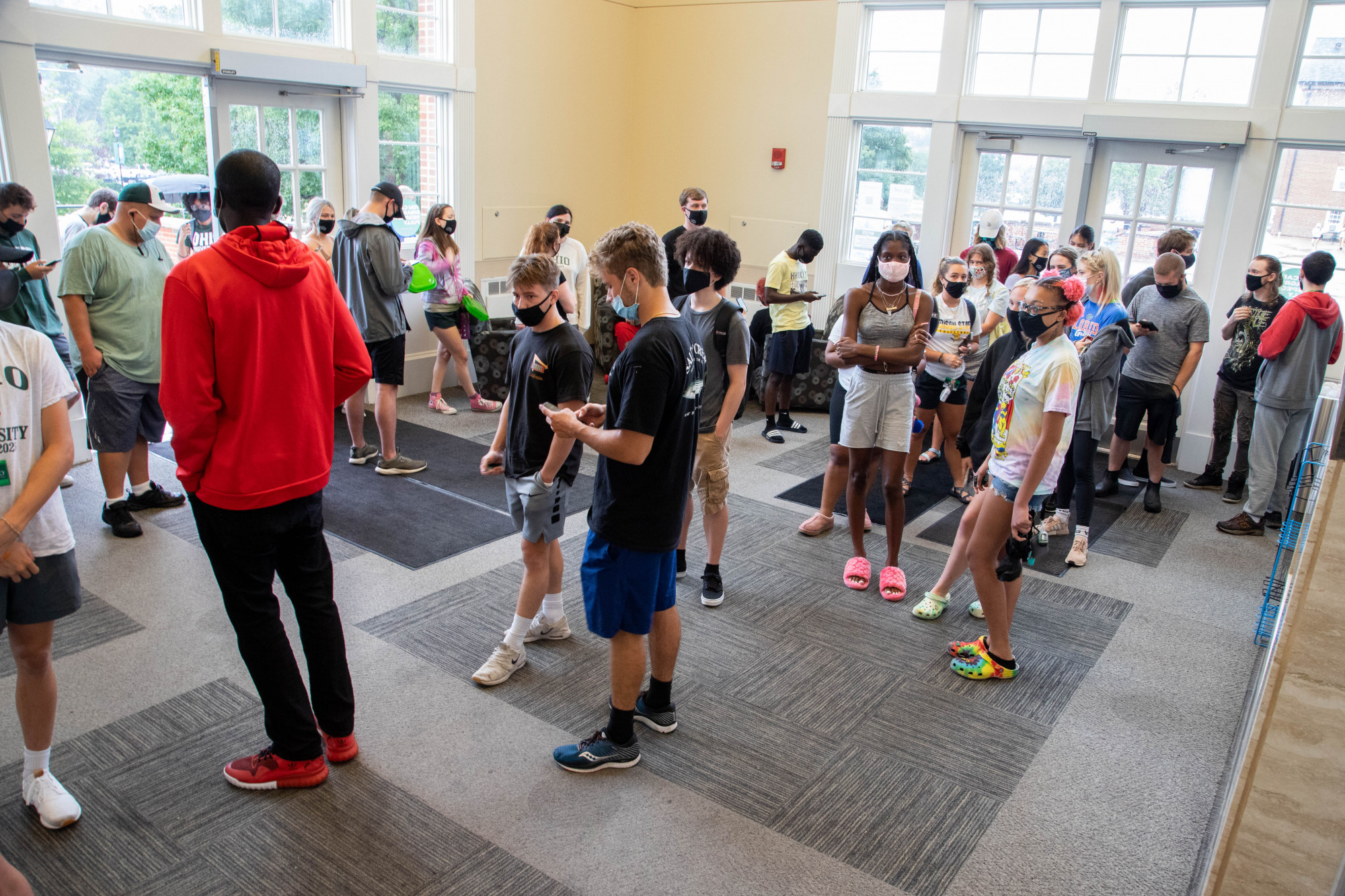 Ohio University students gather in the lobby of Nelson Dining Hall before lining up outside the doors to get inside for dinner on Wednesday, Aug. 25.

An ease of COVID-19 precautions by Ohio University this Fall Semester has resulted in many students feeling more comfortable on campus, alongside a sense of relief from the social and academic difficulties of the previous school year.

Max Faass, a sophomore studying psychology, said the biggest difference between this semester and last semester is the dorm room guest policy, which restricted visitors in residence halls. Faass said it’s nice being able to freely hang out with his friends instead of the previous no-visitor policy.

“This semester, if I’m not doing homework, I’m usually hanging out with my friends in their dorm or they’re coming over here,” Faass said.

He said the ability for more social interaction has also aided in his study habits. Last semester, group study sessions would largely be held on Microsoft Teams, and Faass said he is able to be more productive and efficient when studying with other people in person.

Quinn Mottice, a junior studying middle-childhood education, said the biggest difference and impact he has felt this semester is being able to go to class in person. Mottice said it is easier for him, as well as many students, to learn and do well in school when he is able to sit in a classroom.

Faass said the switch to in-person classes has also helped him academically.

“I learn a lot better when I’m in that (classroom) environment, and it’s so awkward asking questions over Teams,” Faass said. “In person, it’s a lot easier because it’s a face-to-face interaction.”

Samantha Schimmoller, a sophomore studying journalism, said getting back into the classroom is not only good for her academics but also for her mental health.

“I don’t go a day without waving at someone on the street,” Schimmoller said. “Whereas in the past, it’s like I wouldn’t see anyone. It was just such a ghost town.”

Schimmoller said social interaction is also a lot less stressful now, as there are more places open to safely socialize with others.

“It makes connecting with people a lot easier because you don’t have to worry about whether or not they’re vaccinated, or whether or not you could catch COVID,” Schimmoller said. “This feeling of safety has opened people up more, along with the rest of campus.”

Faass said it is now a lot easier to meet people than it was before, and increased social interactions have created a community within residence halls and classes that did not exist in the spring.

“A lot of the struggles of last semester were just feeling isolated,” Mottice said. “Even though I was on campus, it felt like there wasn’t much of a social scene or much ability to get out and see a bunch of people.”

Though OU’s COVID-19 policies last year caused him to lose touch with many people, Mottice said the loosening of these guidelines have allowed him to reconnect with old friends.

Faass said though the masks in classes and residence halls can be inconvenient, he is glad the university is keeping its students safe without completely stripping them of a college experience. However, with the vaccination mandate, Faass looks forward to a time when students can walk down the hall or into class without having to wear a mask.

“As more people are vaccinated and people are less likely to test positive, it’d be cool to see them slowly start to loosen restrictions to the point where it’s like we’re at college, (and) we’re not at a college with COVID,” Faass said.