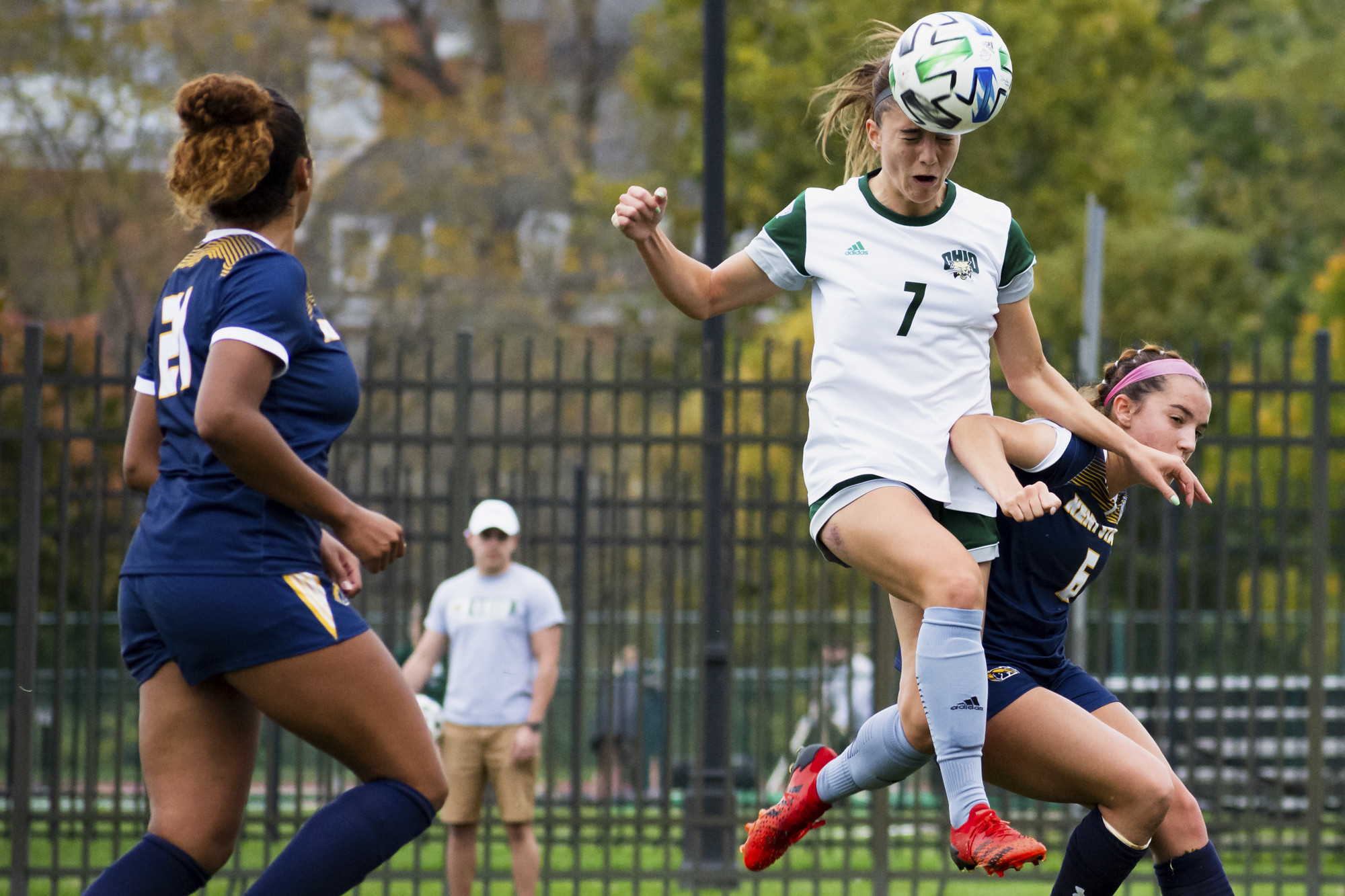 Ohio University midfielder Madison Clayton (#7) heading the ball in an effort to score a goal against the opposing team Kent State at Chessa Field on Thursday Oct. 28th, 2021.

A Tale of Two Seasons

Soccer: Fall 2021 was a season to remember for Ohio

2021 was a tale of two seasons for Ohio. The COVID-19 pandemic moved what would have been the fall 2020 season to spring 2021, and the 10 matches played in that time left something to be desired for the players.

In a shortened Mid-American Conference schedule only, the Bobcats went 3-7 and missed postseason contention. However, in the following fall season with a full schedule, the script was flipped on the way to an 11-5-3 record, including 7-1-3 in conference play. There was a night and day difference in the success between the teams, even with just four months of prep between seasons.

“Man, I don’t think anything can compare to that COVID year,” coach Aaron Rodgers said. “But, I think, honestly, a lot of what we went through last year has helped develop what we have now.”

Rodgers also noted how the players improved on the grittiness they lacked the season before. Gaining an edge and flexing their toughness helped grind out wins in late-match opportunities.

“I think everyone took last season very personal and did what they needed to do individually to get better for the team, and then we all came together,” forward Shae Robertson said.

Ohio was able to contend for a MAC title as the second seed, earning a first round bye in the conference tournament. However, Ohio ultimately fell in the semifinals to Kent State 3-2 in a heated rematch from the regular season’s conclusion. Although it was not the ending it wished for, Ohio was a force in the MAC throughout the season and posted its best record since 2002.

The Bobcats lost only one match in regular season conference play and outscored MAC opponents 16-6.

To the players, the opportunity to play for the MAC title was a blessing in and of itself.

“We were just really determined to not feel that way again, like at the end of last season we were playing for nothing, really,” goalkeeper Sam Wexell said. “I mean, we had no chance to make the tournament … and that's just a terrible feeling. I think everyone just really, really wanted to win this year.”

Ohio also didn’t end their season without some individual hardware. Rodgers was awarded 2021 MAC Coach of the Year. Olivia Sensky and Wexell were given First Team All-MAC honors, and Abby Townsend and Haley Miller got the nod for Second Team All-MAC.

Sensky was also selected to First Team of United Soccer Coaches Women’s Soccer All-Midwest Region Team, proving she was one of the best defenders in the entire region. Miller and Townsend were placed on the Third Team of the same name.

Rodgers asserted that the Bobcats play defense with all 11 players on the field. This mentality helped them allow the least amount of goals in a full season in over two decades with only 17. Wexell contributed 57 saves on the season. Ohio’s opponents were held scoreless in 10 of 19 matches in 2021.

Highlights of the season included a 1-0 victory over Miami on Senior Day, avenging two losses from the season before. Ohio also showed prowess in its domination of Northern Illinois on Oct.10 in its highest scoring performance of the year. Its offensive capabilities appeared earlier when it fired 25 shots, including 11 on goal, in its 3-1 win against Cleveland State on Sept. 12.

Ohio will be back on track next season as it hopes to mirror the success of 2021. That being said, the team has much to be proud of.

“It’s hard to be nervous when you know your teammates are going to play well,” Wexell said. “We just believe in each other and try to love on each other whenever we can. It may sound a little cheesy to people on the outside but it’s really important … It’s hard mentally and physically, so (we) just try to hold each other up.”