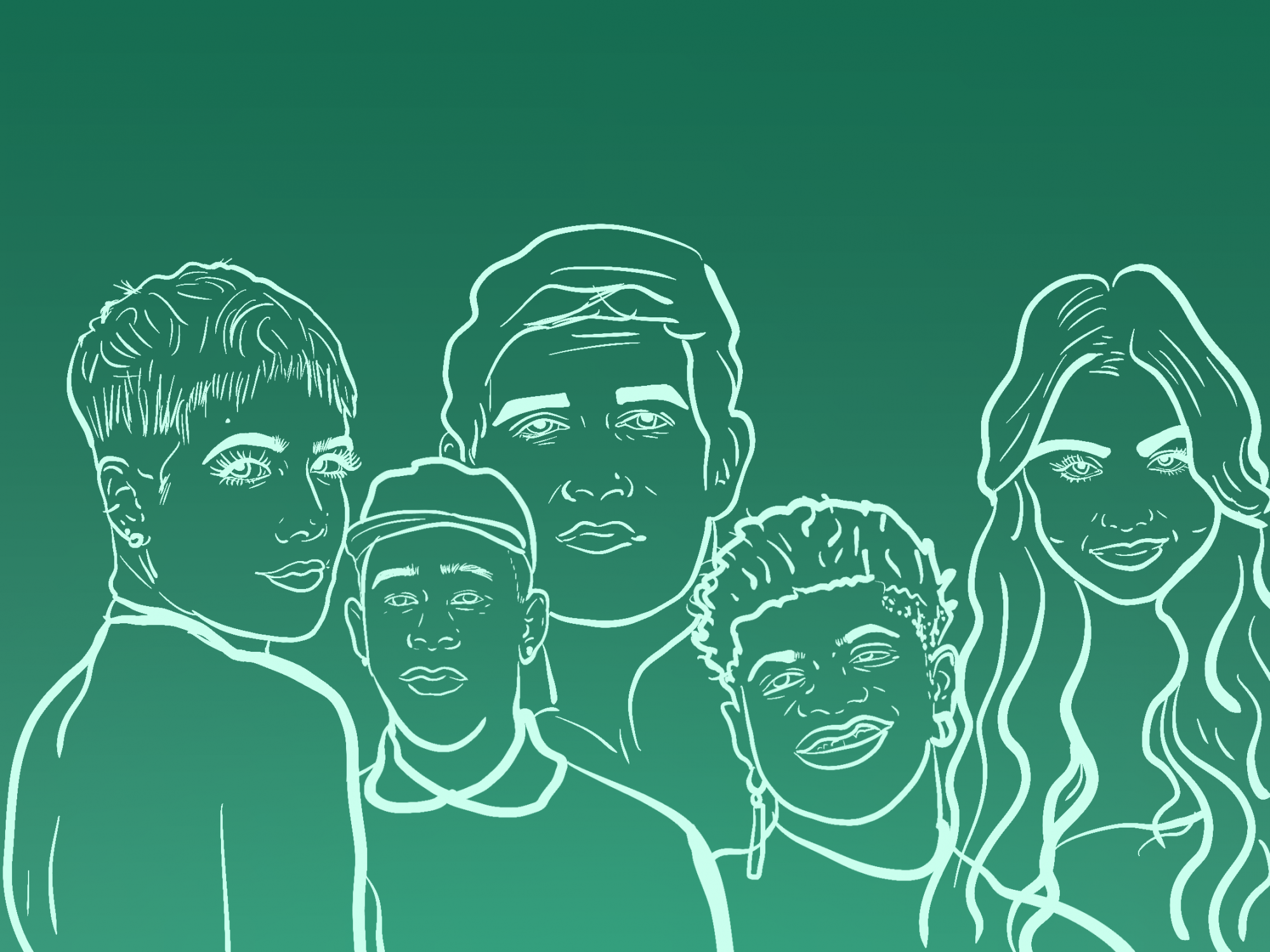 After a year and a half of dealing with the pandemic, 2021 was the light at the end of the tunnel with new album releases across all genres. Throughout this year, musicians have truly risen to the occasion to revive the music industry and create new sounds, visuals and concepts unknown to audiences before.

In no particular order, here are some of the best albums of 2021 and hopefully ones that fans will be listening to for the next several years to come:

You either love or hate Olivia Rodrigo, but regardless, this album made an impact on Top 40s radio stations all around the world. With back to back hits starting with “driver’s license” then “deja vu” and ending with the smashing-success “good 4 u,” the singer’s strategic release made critics take her seriously as a young woman diving headfirst into the music industry. Rodrigo also recently received seven Grammy nominations for the album, proving that the young star’s talent is one to watch out for for years to come. Sour in a sense is the pop album we all needed this year and was a perfect entry into the pop genre for Olivia Rodrigo.

Planet Her by Doja Cat

Doja Cat has been one of this year’s most successful female artists and didn’t disappoint with her third alien-inspired album Planet Her. Integrating her South African heritage and infectious rapping abilities on songs such as “Woman” and “Get Into It (Yuh),” Doja Cat proved her range and experimented outside of her usual R&B roots to produce a noteworthy composition of tracks. This album made a statement through its visuals as well, especially after the release of the music video for “Need to Know” proved Doja Cat’s true devotion to her craft and vision as an artist. Planet Her is a standout album because of the singer’s ability to grow and change her craft as she pleases, not fearing backlash or judgment and instead embracing the new eras of her life.

if i could make it go quiet by girl in red

This 22-year-old’s solo debut encapsulated the feelings of adolescence. From longing to lust to sadness and regret, girl in red’s distinct sound mixed with pulsing beats and echoed piano makes one feel all the emotions of a young adult at once, making the album all the more relatable. if i could make it go quiet highlights the depth and rawness of the songwriter’s lyrical abilities as well. The singer’s strong, husky vocals and maturity helped solidify her spot in the alternative music scene, and girl in red was able to tap into the hearts and minds of all her followers this year.

Lil Nas X dropped his first album this year as well and simply did not mess around. MONTERO is the album that proved every critic wrong regarding the artist’s talent. Unlike his famous predecessors “Old Town Road” and “Panini,” Lil Nas X’s new tracks give insight to his rise to fame and dealing with the trials and tribulations of young love, especially as a Black gay man. What makes this album worth the listen is just how diverse each track is as well as the unique features included. Songs like “SCOOP ft. Doja Cat” and “DOLLA SIGN SLIME ft. Megan Thee Stallion” are the swagger fans love to see from the star, while songs like “LOST IN THE CITADEL” and “SUN GOES DOWN” are the vulnerable side of the singer we don’t see as often.

If I Can’t Have Love, I Want Power by Halsey

Halsey’s fourth studio album was a creative project Halsey had wanted to do for a while. Inspired by Halsey’s own pregnancy during the pandemic, the singer wanted to portray the true reality of what women go through during that process. Teaming up with Nine Inch Nails’ Trent Reznor and Atticus Ross, If I Can’t Have Love, I Want Power is a concept album ingrained with the themes of body horror, gender roles and stereotypes and the untold, darker side of pregnancy. The album was also accompanied with a film that hit theaters in August of the same title, bringing Halsey’s story to life in a medieval-like setting. Every song packs a punch and lyrically may be some of the singer’s best. This is especially present in tracks like “I am not a woman, I’m a god” and “Bells in Santa Fe,” which will be statement pieces for the artist for years to come.

Anderson .Paak and Bruno Mars are the duo we never knew we needed until November of this year. The two best friends combined their musical strengths to create An Evening With Silk Sonic which is a revival of the ‘60s and ‘70s R&B sound that Mars is used to producing. This album has only nine songs, but it’s a wild ride. From songs like “Leave the Door Open” to “Smokin’ Out the Window” and “777,” .Paak and Mars utilize their high falsettos and spunky lyrics that easily get you up on your feet in no time. The listening experience is also one that feels like an intimate concert between the listener and the duo, filled with talking bits from funk musician Bootsy Collins as the host of Silk Sonic’s album journey. Overall, this album brings charisma and charm to the music repertoire of 2021.

Michelle Zauner and the rest of Japanese Breakfast released its third album Jubilee this past June, embracing the sign of the times with a fresh, classic indie sound. This album is Zauner at her most joyful, letting go of the past grief she has grown famous for writing about. Jubilee’s tracks are fluid and influenced by pop music, which is evident in songs like “Posing in Bondage” and “Be Sweet.” Synths and horns also are present all throughout and Japanese Breakfast’s colorful lyrics and are exactly why this album received all the praise it did. Up for Best Alternative Album for the 2022 Grammy Awards, Japanese Breakfast is a noteworthy band ready to sweep the competition.

H.E.R.’s first solo debut album was a notable release in the R&B genre. Back of My Mind is full of raspy vocals, falsetto notes, raps and wails that the singer is best known for. H.E.R.’s strongest tracks are “We Made It” and “Damage” that discuss the hardships that come with loving someone and how to deal with them. With ‘70s and ‘80s influences throughout, this album is the 24-year-old’s way of capturing her audience. The soulful tone is present within every song, and H.E.R. uses her vocal abilities to soothe listeners and make them pay attention to her own experiences.

Finally, Adele came back to the music scene ready to give fans an emotional whiplash with her fourth album after six years. 30 is the journey of the singer’s divorce from her husband Simon Konecki and may just be her most detailed and vulnerable album yet. With songs like “Easy On Me” and “To Be Loved,” you can feel the heartache of letting go of the one you used to love and the guilt Adele felt for choosing to pursue her own happiness. Adele is hopeful and reflective on songs like “Hold On” and “Oh My God,” which makes these tracks even more relatable to listeners. This album is a clear look into Adele’s life and a masterpiece that perfectly encapsulates the feelings of love, loss, trauma and moving on.

CALL ME IF YOU GET LOST by Tyler, The Creator

This mixtape encompasses Tyler, The Creator using his musical skills to his advantage, implementing his gravelly voice and playful hooks and rhymes. The mixtape has a dramatic undertone but that’s what the rapper does best. Tracks like “Corso” and “Lemonhead” are short and sweet, while others such as “Massa” and “Manifesto” are dark and cynical. CALL ME IF YOU GET LOST is unique because of its composition. Freestyles, original songs, radio singles and sneak peaks of unreleased songs make up the mixtape and leave fans eager for what’s next to come from Tyler, The Creator.