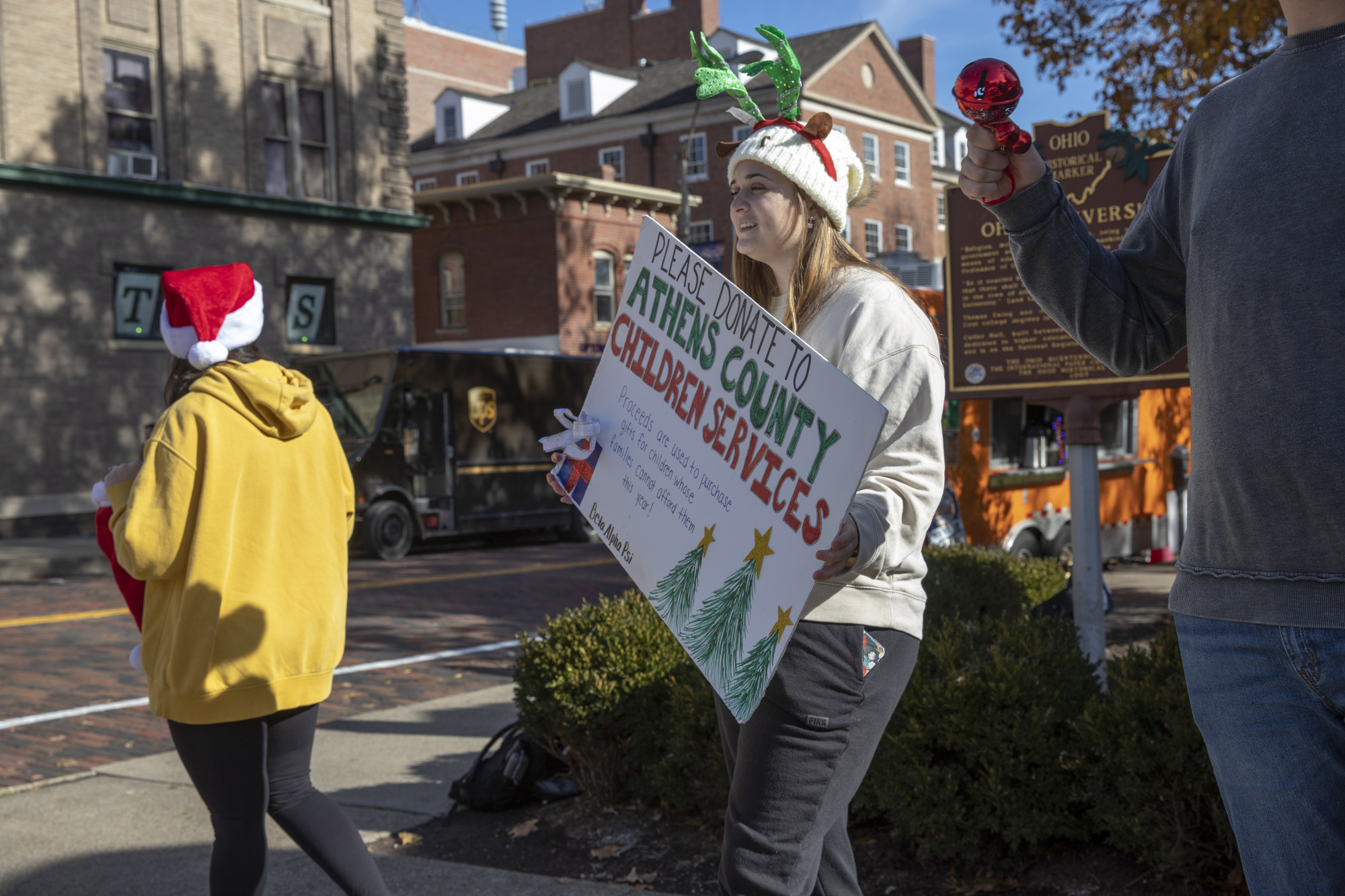 Mollie Maxon holds a sign that reads "Please donate to Athens County Children Services" as an event for their organization Sigma Alpha Psi.

Charitable organizations reflect on their efforts, successes of 2021

During a year spent recovering from the coronavirus pandemic and seeking normalcy, people have put a great deal of importance on maintaining community service toward those in need. Local charitable organizations and nonprofits have been active over the past year to ensure everyone can have access to necessary resources.

Bobcathon is a student organization that raises money throughout the year to fund its annual dance marathon in which the proceeds are donated to the Ronald McDonald House. However, this past February, the event was cancelled due to COVID-19 precautions, Ryan Lee, a senior studying science education and president of Bobcathon, said.

With the COVID-19 precautions in place, Lee said it was difficult to continue raising money for the organization, and Bobcathon had to experiment with a lot of new strategies.

“We had to get creative,” Lee said. “We had to do virtual things; we had to really work to try to raise our money.”

Lee said the loss of the dance marathon was hard to manage because the event is the main aspect of the organization. Despite the cancellation, Bobcathon prevailed and held a virtual 12K last March to represent the usual 12-hour duration of the dance marathon. The event generated over $50,000 in donations.

“We wanted to make people feel like they were doing something together, even though we were all separated,” Lee said. “I consider it a big success for the times that we’re in.”

After the success of this event, Bobcathon held the “Haunted Hustle,” a Halloween 5K based on the previous 12K designed to increase funds for the return of the dance marathon scheduled for Feb. 19, 2022, Lee said.

In addition to the 5K, Bobcathon has held various fundraising events including, a raffle, a yard sale, a Dad’s Weekend Breakfast and more. Lee said the organization also receives donations and sponsorships from many local businesses.

Currently, Bobcathon is in the process of preparing for the upcoming dance marathon by working on getting people to sign up for the event and reaching out to more businesses about sponsorship opportunities.

“What the organization was built on is the dance marathon, so when we don’t have that, it’s so hard to be who we are,” Lee said. “Being able to have the dance marathon allows Bobcathon to act as its true self.”

Karin Bright, president of the Athens County Food Pantry, said the pantry has been providing food to those in need for over 40 years, but they have seen a decreasing trend in the number of people they serve since the pandemic began.

Bright said at the beginning of this year, numbers were likely down because of government assistance to families in need such as stimulus checks. She also attributed this to other food banks being more proactive in serving the people of Athens than they have in the past.

Bright said people are also tentative to take food from the pantry because of a worry of taking it from others in need.

“Even though our numbers may be a little lower this past year, we know that the people that we are serving still really, really need our services and are very grateful,” Bright said.

Though the number of food donations in the beginning of the year and during the pandemic also decreased, Bright said monetary donations to the pantry remained consistent in terms of both business and public donations.

Despite a decrease in activity, the pantry stayed in business during the pandemic and stayed true to their schedule of 10 a.m. to 3 p.m., Monday through Friday. Though the building was on lockdown, the organization worked out of the building’s windows in order to serve those in need while adhering to COVID-19 protocols.

Alongside the reopening of its building in June, the Athens County Food Pantry has implemented multiple new programs over the past year in order to increase its reach and service to the county, Bright said.

The On the Road program was implemented by the food pantry in February and is designed to transport food from the pantry to various outlying communities. Bright said the program is designed to provide food to those who struggle to make it to the pantry due to their work schedule or an issue of transportation.

Another vision for the pantry that began its premier phases this year is the cleaning and personal hygiene program. The pantry began stocking a limited assortment of cleaning products this fall and plans to fully implement the program in January 2022.

Though providing food will always be the pantry’s number one priority, Bright said it will continue to pursue different programs like the cleaning and personal hygiene program in order to serve the public as much as possible.

“We want to keep building on what we have done,” Bright said. “Our whole idea is we want to help people and help make their lives better, not just in terms of food.”

The Athens County Foundationis an organization that gives out $500,000 to $600,000 in grants to Athens nonprofit organizations, focusing on areas of economic vitality, thriving communities and individual health and well-being, Kerry Pigman, executive director of the foundation, said.

The organization has worked during the year to fund broadband access, community food security and programs that work to advance racial equity and justice.

Pigman said with the pandemic, the foundation created a response fund which they later labeled the Response and Resilience Fund. Over the past year, the fund has been designated to support the community more generally rather than focusing on the pandemic response. This fund will make up for over $350,000 worth of grants.

“This year we renamed it the Response and Resilience Fund to signal to the community that we are continuing to provide rapid, flexible sources of funding,” Pigman said.

The remaining grant money will be distributed during the foundation’s fall grant cycle, making for another $270,000 donated.

Pigman said the Athens County Foundation is funded from donations as well as partnerships with other similar organizations. She said during 2021, the foundation has seen a significant increase in donations towards the Response and Resilience fund, and the foundation welcomes these donations with open arms.

“In Athens County ... the need far outweighs the flow of donations in terms of what the work that nonprofits throughout our community are doing,” Pigman said. “People have been really generous, but I would also just encourage people to continue with their acts of kindness and generosity.”