How businesses were affected by the West Union Street explosion

Rick Sirois, director of Athens code enforcement, said the second floor of Cycle Path Bicycles is condemned and the code office is currently waiting to see what the owners will do with the property. The building had a bike shop on the first floor and apartments on the second floor.

“As for as the code violations, those code violations would have been corrected, they were small items,” Sirois said. “But it is kind of mute now because the whole second floor has been condemned and they’ll have to redo the structure.”

Sirois said the building will have to be brought back up to code before it reopens.

Thai Paradise, 102 W. Union St., sits to the right of Cycle Path Bicycles. Beth Simon, manager and financée of the owner, said Thai Paradise had to close from April to June in order to fix the building. She said she brought in the original contractors from when the building originally opened. 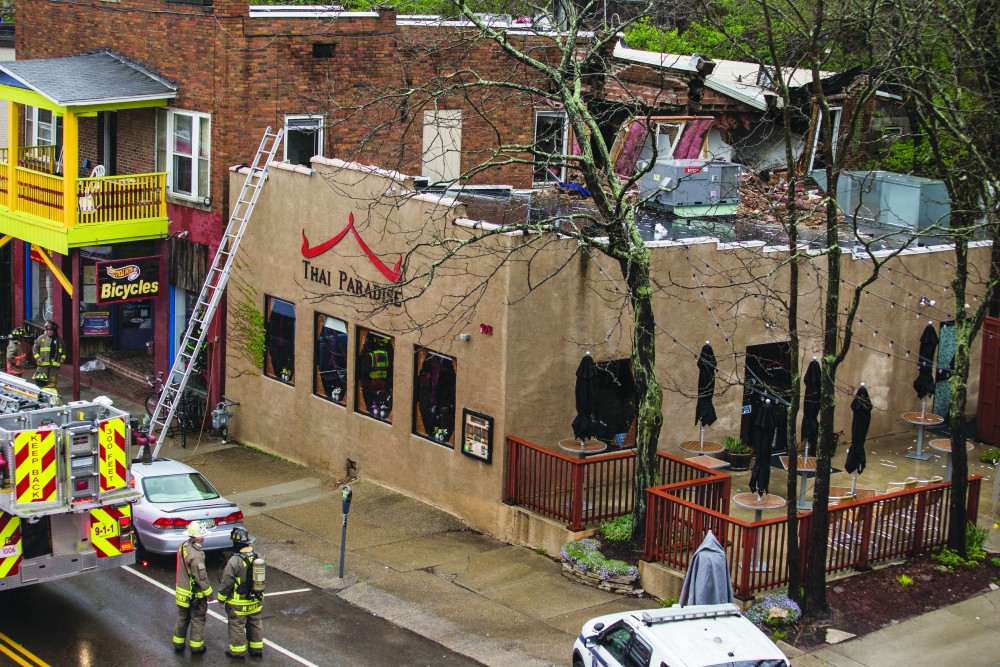 An explosion caused by gas occured at 104 West Union Street today. At least one injury has occured from the incident.

“Our roof was punctured by a lot of the debris and when we had to fix that, we had to redo the whole roof,” Simon said. “Then we had to do the heating and cooling because the vents were damaged and the water tank because our water tank was in that corner.”

Simon said she moved employees to the other locations of Thai Paradise in Pickerington and Buckeye Lake.

“It was slow going talking to the insurance, getting the funds in and make sure that we could also support our staff at the same time, too,” Simon said. “We are a family business so we care about what happens to our staff, not just while we’re open but also while we’re closed so we tried to help them while we could.”

“The only affect we really had was just talk,” Wolf said. “It created a little bit of pandemonium.”

He said he was sad to see a local business have to close and rebuild.

“It was a bummer to see the bike shop close and still be closed. You never want to see a local business have to struggle like that and go through rebuilding,” Wolf said. “I would never wish that on a business or any local business however.”