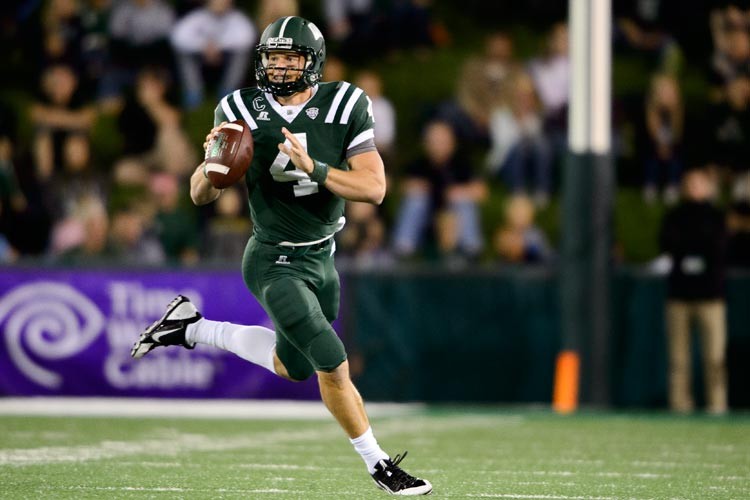 Tyler Tettleton scrambles before a pass against Marshall. The Bobcats beat the Thundering Herd on Sept. 14. (File Photo)

Football: Tyler Tettleton wants to be a ‘player’s coach’ at Ohio

T yler Tettleton has had plenty of coaching opportunities since he played his final game as quarterback for Ohio in 2013.

The former standout Ohio quarterback has jumped around both the professional and college football worlds. He’s been a graduate assistant for Oklahoma, an offensive quality control coach for the Cleveland Browns and an offensive analyst for LSU.

But no matter where he worked, Tettleton always had Athens on his mind.

Tettleton regularly kept in contact with his former coaches from Ohio even if he rarely visited Athens in person. His coaches, including then-Coach Frank Solich and Offensive Coordinator Tim Albin, taught him life lessons that carried into both his football career and his daily life.

Now, Tettleton is working for Albin.

After Solich stepped down as coach in July, Albin assumed the role of coach and brought on Tettleton as a running backs coach and passing game coordinator. Tettleton holds Albin in high regard and considers him a father figure.

“I believe in Tim (Albin) so much,” Tettleton said. “He’s been a father figure to me and was great when I played here. He’s such a great human being, everybody loves him, and so I’m excited to work for him.”

Tettleton recalls how Albin and his other coaches treated players not as a tool for the program, but as a person to develop and help both on and off the field. Now that he’s a coach himself, Tettleton wants to create the same environment he was welcomed into.

“I definitely want to try to be a player’s coach,” Tettleton said. “My whole goal here is to try to bring out the best of these guys.”

Tettleton cited player interaction as the most important skill he learned from Ohio’s coaches. When he found himself in coaching positions, his goal was to create a comfortable culture the minute his players walked through the door. He’s not too far removed from his own playing career, so he knows that players need to feel wanted and capable.

Solich and Albin are not the only coaches who’ve prepared Tettleton. The former quarterback also worked under high-profile coaches such as Lincoln Riley at Oklahoma and Ed Orgeron at LSU. He’s learned to appreciate family-oriented coaches and gained more insight on how to interact with players.

“When you’ve been to as many places I’ve been so far and in short amount of time,” Tettleton said. “You definitely get to see a lot of coaching styles and how people interact.”

As excited as some may be for Tettleton’s return, he isn’t in Athens for a reunion tour. He wants to focus on the players and build on what Solich constructed with the Bobcats.

Even more so, Tettleton wants to finally win a Mid-American Conference championship.

“That’s the biggest thing,” Tettleton said. “That’s the one thing I’m striving for.”

Tettleton’s ambitions don’t just stop there. He wants to develop Ohio into a program to be feared. He wants Ohio to become a ranked team.

But his focus isn’t on the future yet. He wants to focus on the short term. Tettleton is focused on making his first season back at Ohio as successful for himself, his fellow coaches and players as possible. He wants to help the Bobcats become better people both on and off the field just like his coaches did for him.