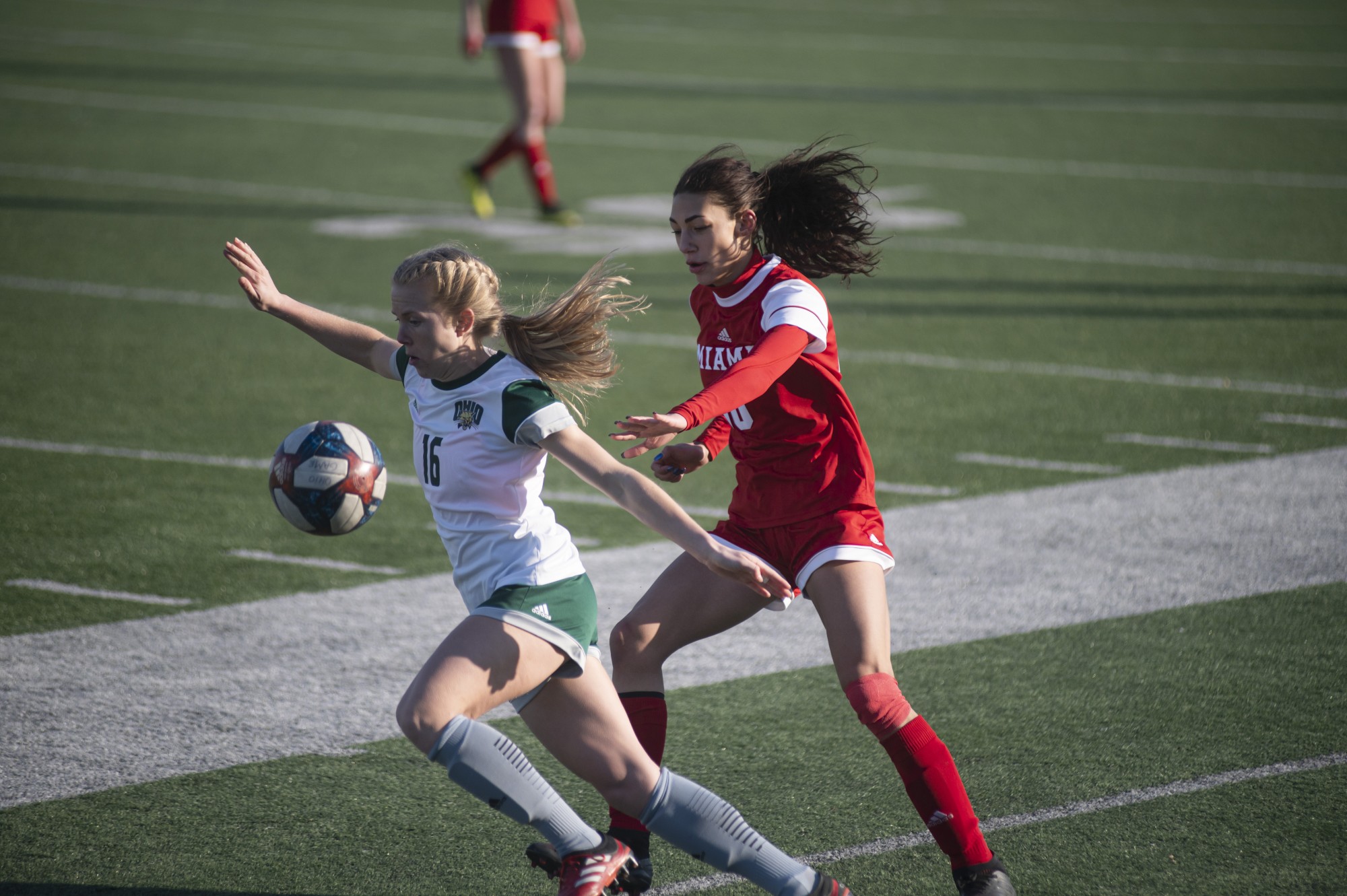 Abby Townsend (#16) guards the ball from a rival Miami player during the home game held at Peden Stadium in Athens, Ohio, on March 4, 2021. The Bobcats lost to the Redhawks 0-1.

C hessa Field will be loud and excited for Ohio’s 2021 home opener with crowds back to full size. Ohio looks to bounce back from its abridged 2020 campaign. It went 3-7 for the year but faces a full season ahead in 2021. The Mid-American Conference preseason poll slated Ohio as eighth out of 12 spots.

Four Bobcats were nominated for All-MAC teams in 2020 with Morgan Collica leading the pack with a first-team nod. The Bobcats return to non-conference play this season, which began with an away victory over The Virginia Military Institute on Aug. 19.

In the 1-0 victory against VMI, the Bobcats dominated with 21 shots to the Keydets’ eight. Shae Robertson contributed six of those, connecting on the match’s lone goal in the 15th minute. She was assisted by Madison Clayton. A solid win on the road to start the season should set the tone for coach Aaron Rodgers’ squad for the rest of the year.

Marshall matched Ohio with a 3-7 record last year but will enter Thursday’s matchup at 0-2 following a tough 3-0 loss against Kentucky. All three goals were scored within 15 minutes of each other by Jordyn Rhodes. Marshall’s squad will have to make a number of adjustments on defense if they want to keep up with Ohio’s strikers Thursday.

Ohio’s last matchup against Marshall was a convincing 4-1 victory in September 2019. Marshall had struggled mightily in its attempt to slow down Ohio’s attack. It allowed 10 shots on goal compared to Ohio only letting up four. The all-time series between the programs is 12-3-2 in favor of Ohio.

The Bobcats are entering the season with a surplus of veteran leadership. Out of their 11 starters against the Keydets, seven of them were seniors, fifth years or graduate students. However, they also have strength in youth with three sophomores coming off the MAC All-Freshman team. The starting lineup for the Bobcats in their first win included Collica, Robertson, Clayton, Sam Wexell, Carsyn Prigge, Abby Townsend, Ella Bianco, Haley Miller, Isabella Ginocchi, Olivia Sensky and Paige Knorr.

Highlighted is Townsend. The senior looks to contribute again after three shots against VMI. Townsend was an All-MAC First Team selection in 2019 and was tied for the team lead in goals a season ago.

Ohio will be coming off a six-day break, while Marshall will be off for three. With both teams well rested, it should leave for an exciting and energy-filled matchup.