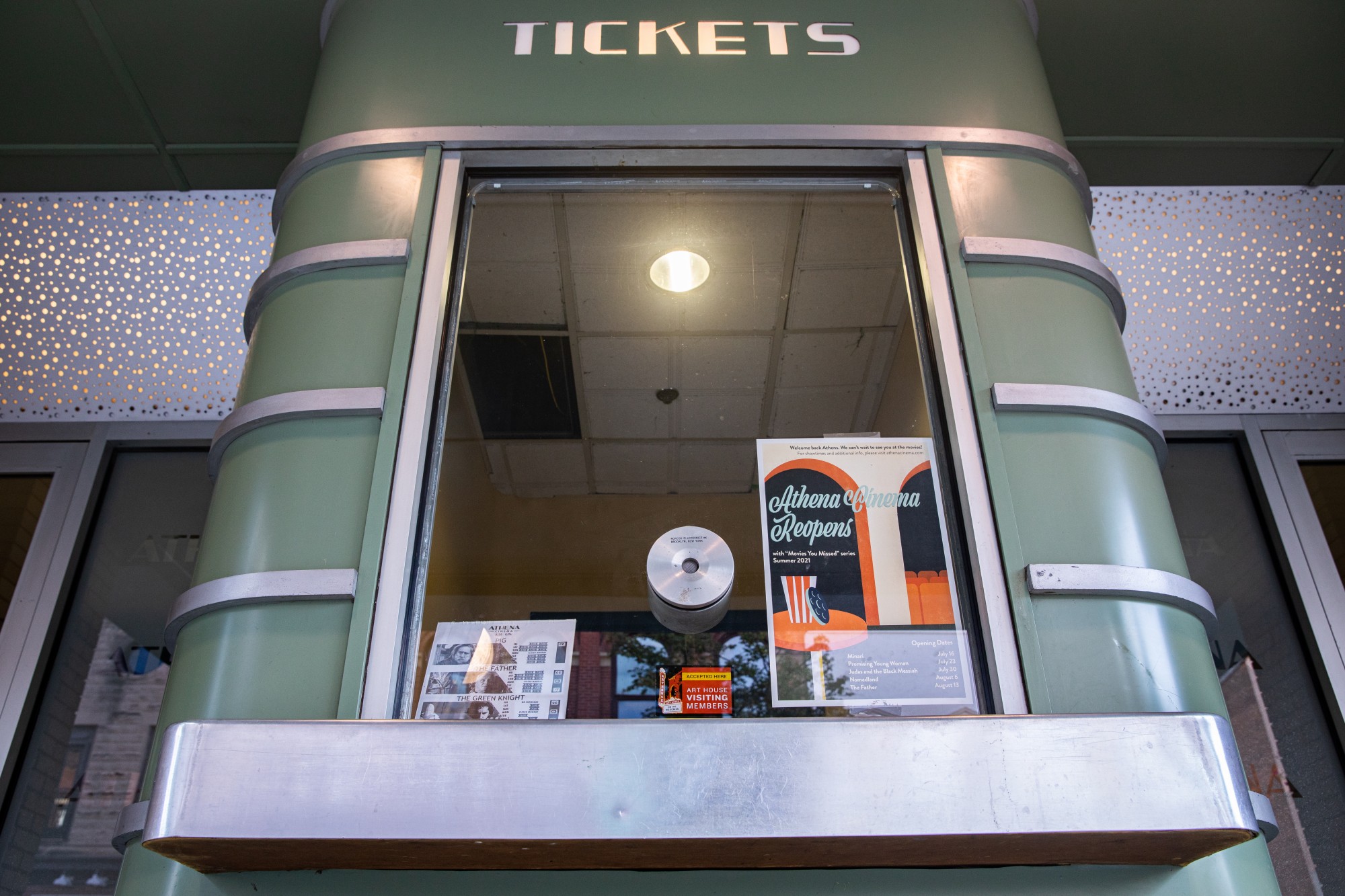 The Athena Cinema ticket booth turns its lights back on advertising its reopening on Monday, August 23, 2021.

Athena Cinema reopens after longest closure in the theater’s history

D uring the pandemic, the glowing, green marque that crowns the Athena Cinema read: “Stay healthy Athens, see you soon.” The black letters used to display that message were put up around the time of the theater’s closure on March 16, 2020. For 16 months after that, the message remained on the marquee.

“We just didn't have any idea that we'd be closed that long,” Alexandra Kamody, director of the Athena Cinema, said. “But then (the message) sat there, and it just seemed like it really kind of spoke to the community. It somehow felt like it had some deeper symbolism. At some point I just decided we weren't going to change (the marquee) until we can reopen.”

On July 16, 2021, the cinema rearranged those letters. “Welcome back Athens,” the marquee read, signifying to the public that the theater was reopening.

“It was definitely a celebratory feeling when we were able to change that and open up our doors,” Kamody said.

“It was definitely a celebratory feeling when we were able to change that and open up our doors."—Alexandra Kamody, director of the Athena Cinema

The Athena’s decision to reopen when it did was based on a number of considerations, including the vaccination status of the Athens community, the smaller summer population of the town and the ability to slowly adapt to being open again.

“I think that the tempo in Athens is just very chill in the summer and it's allowed us to work out little kinks that you just have from being closed for a year,” Kamody said. “We've had power outages and different things that – you know, when an old building sits unused for that long, you're just bound to have a few things like that when you reopen.”

The yearlong closure of the Athena was the longest in the theater’s 106-year history.

Though it changed ownership several times and survived a fire, the Athena has been showing movies since 1915, according to its website.

In 2001, Ohio University purchased and renovated the Athena Cinema. Today, the College of Fine Arts operates the theater, and students enrolled in the Federal Work Study program work as staff.

OU students appreciate the history of the theater.

“I think going to the cinema, especially one with such a rich history in Athens, makes any watching experience feel a bit more special,” Calissa Jones, a sophomore studying mechanical engineering, said in a message.

As the Athena reopens, staff remain COVID-conscious. The theater is operating at a reduced capacity. Although the Athena’s largest theater can seat over 200 people, attendance in all of the Athena’s theaters is currently capped at 50 people, Kamody said. The Athena is also requiring attendees to wear masks, following OU’s protocol.

Students are excited to get back into the theater and see films this year.

“I anticipate returning to see more movies fall semester,” Maddi Raisch, a sophomore studying management information systems, said in a message. “Seeing movies in theaters is a tradition I missed during the pandemic because I used to go so often with friends.”