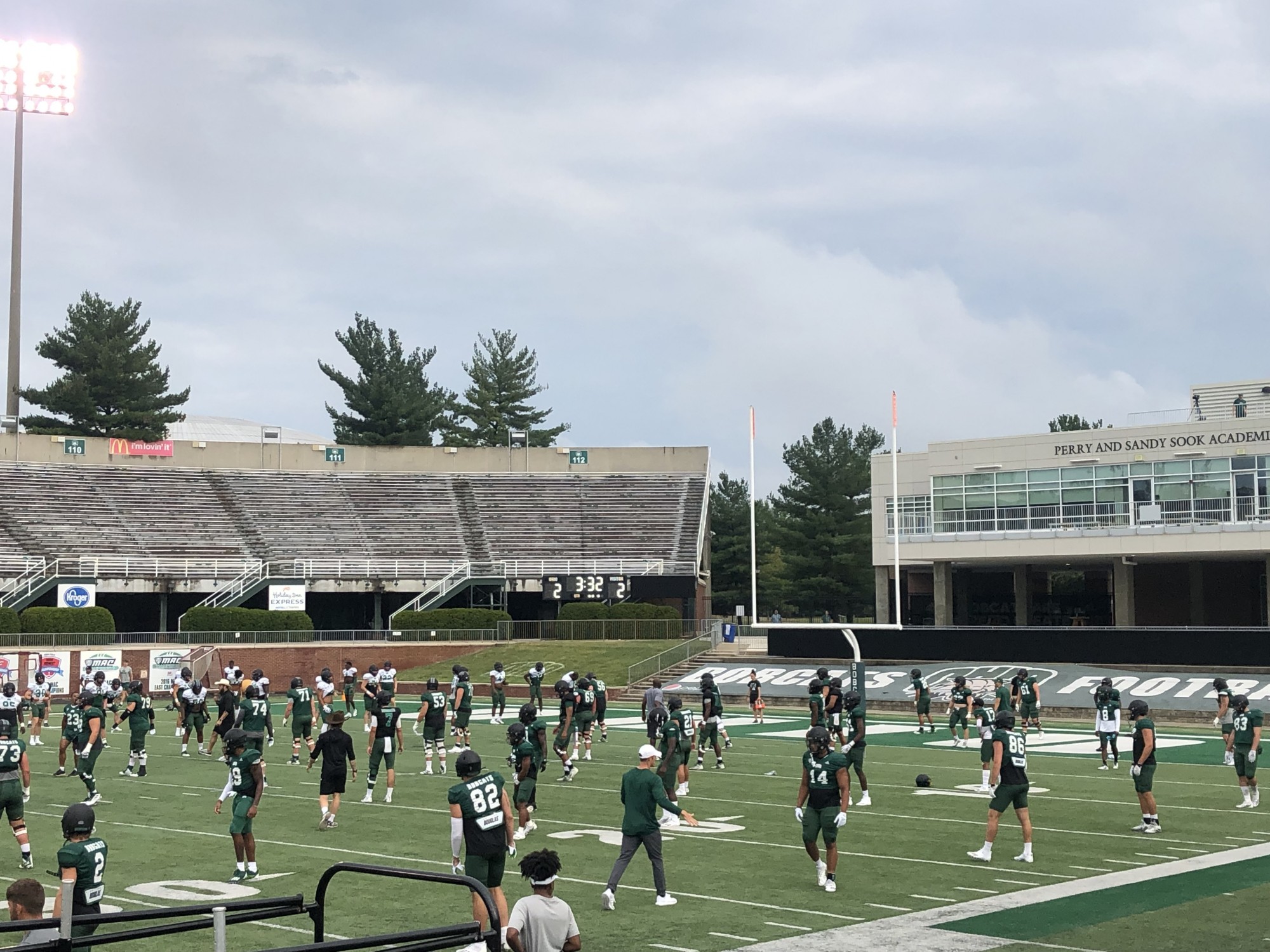 Preventing COVID-19 on the Field

The Bobcats have regained a sense of normalcy.

Their season is set to begin in two weeks when they host Syracuse at Peden Stadium. Fall camp has progressed on schedule, and any hint of last season’s constant uncertainty due to the coronavirus is all but a memory.

However, the pandemic is still ongoing. Ohio isn’t out of the woods yet. Cases have begun to spike once again around the U.S., and the risk of contracting COVID-19 remains high.

Ohio faced the brunt of the pandemic last season. Its schedule was limited to a six-game, conference-only schedule in 2020, which sputtered to an uneventful end after three games were canceled due to COVID-19 issues.

The number one priority for Ohio is that those problems do not upend another season.

Coach Tim Albin said after Ohio’s second scrimmage of fall camp that his focus rests on following Ohio University’s COVID-19 protocols to the letter. All meeting rooms have assigned seating, masks are required indoors and a distance of six feet is maintained between individuals while inside.

The protocols are stringent but necessary. Albin believes the guidelines help eliminate instances of contact tracing should any player for Ohio test positive for COVID-19. Ohio’s games against Miami and Buffalo last season were canceled due to positive tests on its roster.

With cases on the rise, the Mid-American Conference is cracking down. MAC Commissioner Jon Steinbrecher outlined the conference’s policy on teams that suffer from outbreaks of COVID-19 during the conference’s media day in late July.

“We will not have the same minimum roster standards that we did last year,” Steinbrecher said at MAC Media Day in July. “If you cannot play the game, we will not reschedule the game and the game will be forfeited.”

Conference guidelines also require all unvaccinated players to undergo a weekly COVID-19 test. Ohio has little margin for error. One slip up might result in a forfeit, and Albin will not tolerate a loss due to an outbreak.

“All I can do is sit behind my desk and make decisions based on what the procedures are here and then keep the team moving forward,” Albin said. “It's a forfeit, and the Bobcats, we are not forfeiting again.”

The good news for the Bobcats? Few players have to worry about contracting COVID-19.

According to Albin, 102 of the players on Ohio’s roster are either fully vaccinated or received their first dose. Those players comprise 86% of Ohio’s roster. Several holdouts have scheduled an appointment to get vaccinated in the near future. Most, if not all of Ohio’s coaching staff is also vaccinated.

The risk for an outbreak is low, and the progress has been steady. The few remaining unvaccinated players are aware of the risk during the surge in cases. Albin and his staff remind them of it every day.

“If an unvaccinated guy goes to Kroger or goes to Planet Fitness or goes to his girlfriend's house, I can’t control that.” Albin said. “The guys that are unvaccinated, they know what's at stake, because it's coming.”

Albin cannot strongarm his players into vaccination. He isn’t offended if one of his players elects to not take the vaccine. It’s a choice, and he respects that choice. However, Albin can educate them and hope those with reservations change their minds.

“We're gonna meet with the unvaccinated guys early this week,” Albin said. “Make sure they understand, which I know they do. It's a personal choice and we respect it.”

The Bobcats have freedom of choice to not receive the vaccine. However, it’s out of Albin and his staff’s hands if a player is forced to quarantine. The decision is up to them.

Ohio has enough vaccinated players to host a full practice. Albin has no qualms keeping quarantined players off the roster if need be.

“The difference between now and last year is there's a choice,” Albin said. “We have enough to practice. If it goes like they're saying and I think it's going to take off, then we'll shut it down. If I have to leave an unvaccinated guy at home, if we have to do that, I’m going to do it.”