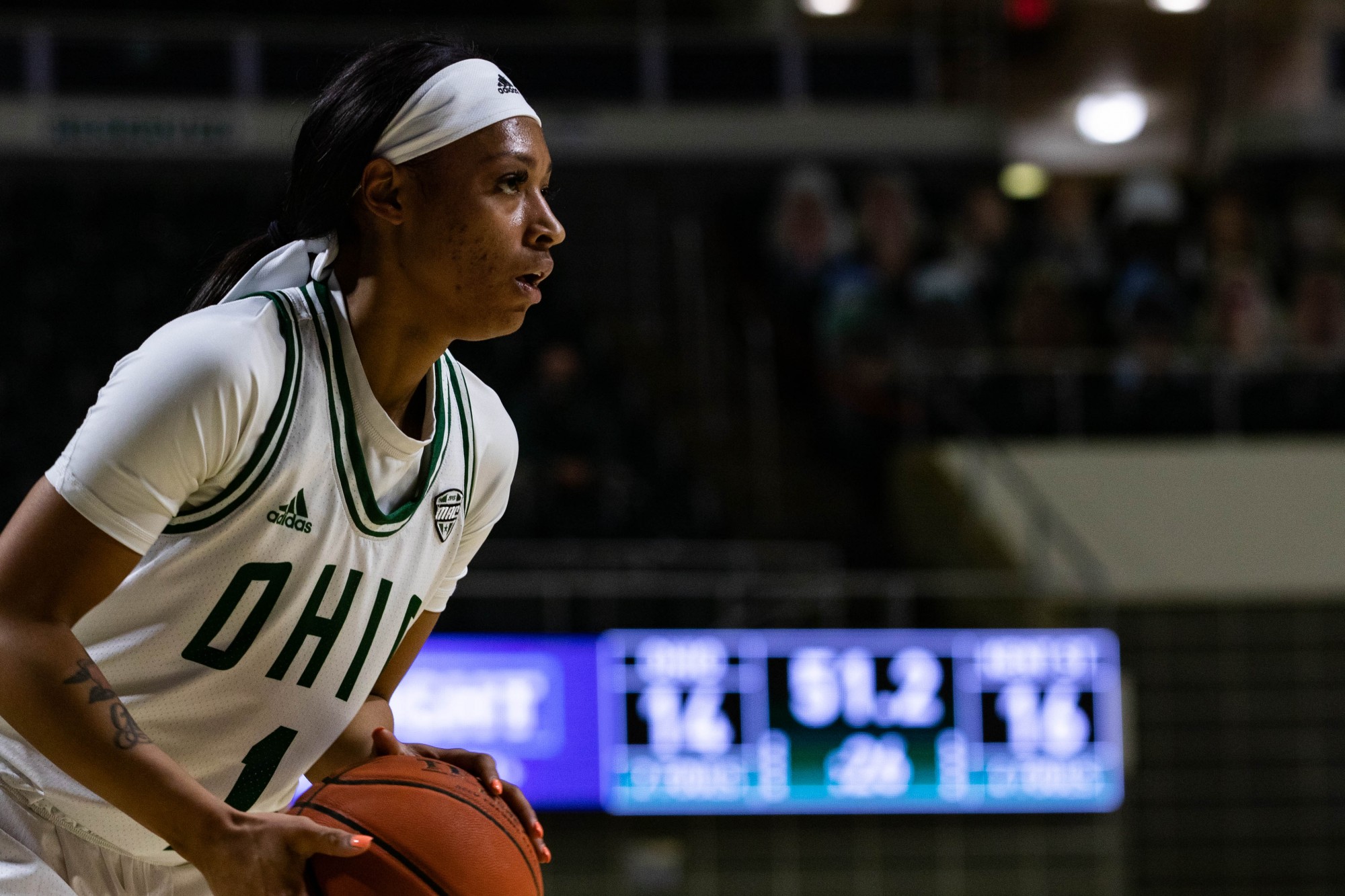 Ohio guard Cece Hooks (#1) analyzes the court before making a pass in a match against Kent State University at the Convocation Center on Wednesday, Feb. 3, 2021.

Cece Hooks wants to leave nothing on the table after her last season at Ohio.

After four seasons with the Bobcats, Hooks is a three-time Mid-American Conference Defensive Player of the Year and the 2020-21 MAC Player of the Year. She has proven herself as one of the best talents to ever take the court inside The Convo. Despite her accomplishments, Hooks believes her collegiate career is incomplete.

That’s why when she declared for the WNBA Draft in early April, she retracted her decision less than two weeks later.

Hooks considered returning around a week after her initial declaration. She had not only her own future in mind, but she was also thinking about the team she’d be leaving. She was certain the Bobcats were within reach of winning their first MAC championship since 2015 multiple times throughout her career, but there were obstacles — basketball and non-basketball related — standing in their way.

Ohio advanced to the 2020 MAC Tournament semifinals before the tournament was canceled due to the coronavirus pandemic. The Bobcats had what they needed to win, but their chance was stolen from them.

“I’m sorry to say this,” Hooks said. “But I feel like we would have won that year.”

Ohio’s 2020-21 season wasn’t spared from COVID-19 either. Ohio had to take extended breaks due to postponements and was forced to play multiple opponents without some of its coaches. The Bobcats also had to deal with these issues while playing in front of smaller crowds, with less staff on the sidelines and constantly needing to keep up with COVID-19 protocols.

Ohio did qualify for the MAC Tournament in 2021, but lost to Central Michigan in the semifinals. It later accepted an invitation to the Women’s National Invitation Tournament, but lost to UMass in the second round of the consolation bracket. After two disappointing tournaments, Hooks was left without a championship or a sense of satisfaction.

“We didn’t have the season that we wanted last year,” Hooks said.

Hooks’ career at Ohio could have ended right then and there. She might have left Ohio as one of its best players in program history but without a MAC title to her name.

But she elected to stay.

The decision to return wasn’t easy for Hooks. She consulted those close to her including her brother, her boyfriend and Ohio coach Bob Boldon while weighing her options. Some wanted her to at least put her name out there for potential scouts. As big of a name as Hooks was, she wanted to give pro teams better tape to look at.

“I sat down with my brother, and we had a talk,” Hooks said. “He wanted me to go, but I told him I feel like it would be better for me personally to come back and develop more.”

When Hooks talked to WNBA scouts, she realized that she still needed to develop herself. She wasn’t sure if she’d be able to handle herself against seasoned WNBA players, and her trouble with fouls might become a liability.

These doubts burned inside Hooks and were what convinced her to opt out of the WNBA draft and return to Ohio for her fifth and final season. She isn’t just returning for her own future, either. She’s returning for Ohio’s future.

Hooks, who was allowed a fifth season due to the NCAA’s COVID-19 eligibility rules, wants to see improvement from both herself and the Bobcats this season. That starts with her stepping up as a leader.

“I feel like I can improve on my attitude, being a better leader,” Hooks said. “I feel like that had a big lump in my season last year. When I would not do good, I’d get down on myself and it’d affect my team. A lot of my teammates look up to me, so I want to be a better example for them this year.”

Hooks wants the rest of the Bobcats to be able to take criticism from other players so that when the team gets down, they don’t just give up. To her, the inability to handle harsh truths necessary for improvement has held Ohio back in the past, so she’s taking it upon herself to fix that.

She wants to be able to lead everyone equally, and that can sometimes mean becoming a little more aggressive with her teammates. Hooks pushes the Bobcats because she wants them to give their all in every game.

If Hooks can improve both herself and the Bobcats, she’ll be able to walk away after this season without any regrets.