What you missed from OU athletics

Students away from Ohio University during summer vacation may fall out of the loop with Bobcat athletics due to the hustle of break. Although many aren’t paying attention to the news from Athens, the world of Bobcats sports waits for no one. 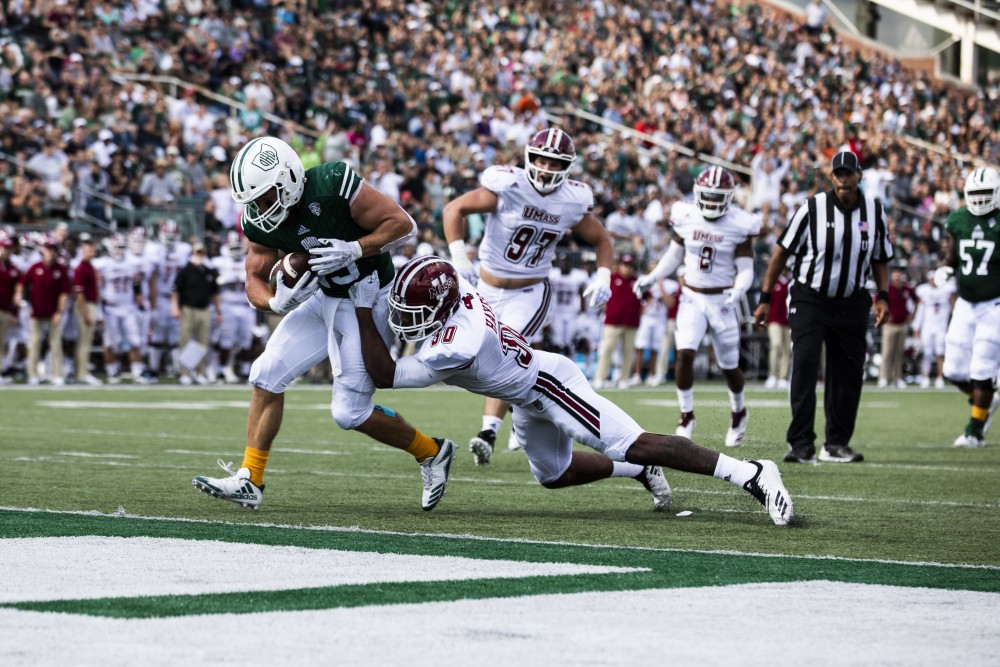 A.J. Ouellette powers his way to a touchdown while playing against UMass. Ouellette would have an impressive day with two touchdowns, as the Bobcats defeated the Minutemen 58-24. (FILE)

On June 30, Ohio athletic director Jim Schaus officially stepped down after accepting a position as commissioner of the Southern Conference, centered in Spartanburg, South Carolina.

Schaus served as athletic director for 11 years, which were arguably among the most productive in program history. The football team made six bowl game appearances; the baseball and softball teams earned a combined three Mid-American Conference championships, and both basketball teams made their way to the NCAA tournament with Schaus in command.

During Ouellette’s time with the Bobcats, he won two bowl games and finished with 3,620 career rushing yards and 32 touchdowns. Ouellette joined the squad as a walk-on in 2014 and left as one of the most well-respected players on the team.

After receiving the call, Ouellette made a post to Instagram and gained over 800 new followers by the next day.

So far, Ouellette has kept his spot on the roster up to the Browns’ first preseason game against the Washington Redskins. His spot is in less jeopardy after the Browns traded Duke Johnson Jr. to the Houston Texans.

Ouellette originally tried out for the New Orleans Saints, Kansas City Chiefs and Green Bay Packers before receiving the call from the Browns.

After an astounding five years as one of the most successful volleyball players in Ohio history, Jaime Kosiorek announced she is going pro.

In an Instagram post on June 18, Kosiorek stated that she will be playing for the Brondby Volleyball Club in Copenhagen, Denmark. Brondby is a part of the Danish Volleyball Federation and regularly competes in season championships in the VolleyLigaen.

Kosiorek was Ohio’s all-time service ace leader with 173 aces, with 53 of those coming during her senior year. She also holds the fifth most kills in program history with 1,380 career kills.

Following the trend of Bobcats going in the big leagues, Rudy Rott saw his major league dreams come true when he was drafted by the Philadelphia Phillies in the ninth round of the MLB Draft. The first baseman became the first Bobcat to be drafted since Mitch Longo was picked up by the Cleveland Indians in 2016.

Rott is the hit king of Ohio with 293 career hits and earned MAC Player of the Year during his final two seasons. With a career .339 batting average and 39 home runs during his time in Athens, Rott should be remembered in Ohio history books for a long time.

Grusczynski comes to Ohio after coaching men’s and women’s golf at Cardinal Stritch University from 2015-2018. He led the Wolves to three straight Chicagoland Collegiate Athletic Conference (CCAC) championships and guided the women’s team to their first CCAC championship in 2017.

Grusczynski comes to a program looking to develop a strong young core. Four of the best golfers on the squad are juniors, and one of the incoming freshmen has played for the Swiss National Golf Team since 2011. Another is ranked eighth in the Ecuador Men’s National Rankings.