The Bobcats Are Back

E very year brings both exciting and challenging tests for Ohio and its teams alike. Last fall brought opponents such as Buffalo to Peden Stadium and Virginia Tech for a volleyball match in The Convo.

2019 is set to feature plenty of great tests for the Bobcats that could set the tone for the season.

Here are the top seven games Ohio fans should attend this fall:

Ohio opens the season in Peden against FCS school Rhode Island. There’s been a lot of attention surrounding the Bobcats this summer after they were picked as favorites to win the Mid-American Conference behind the talent of quarterback Nathan Rourke and a solid defense. Ohio should have some fun against the Rams to open up its season.

Last season, the Bobcats experienced an incline of success as the year progressed. They won their first conference tournament game since 2004 in a 2-1 bout against Kent State. Unfortunately for Ohio, its hot season ended in the semifinals in a 1-0 loss to eventual MAC champion Bowling Green.

The Falcons travel to Athens in the middle of the season for a rematch against the Bobcats that can define the year Ohio will have.

Ohio returns a vast majority of its talent from last year and was picked to finish fifth in the conference this season. 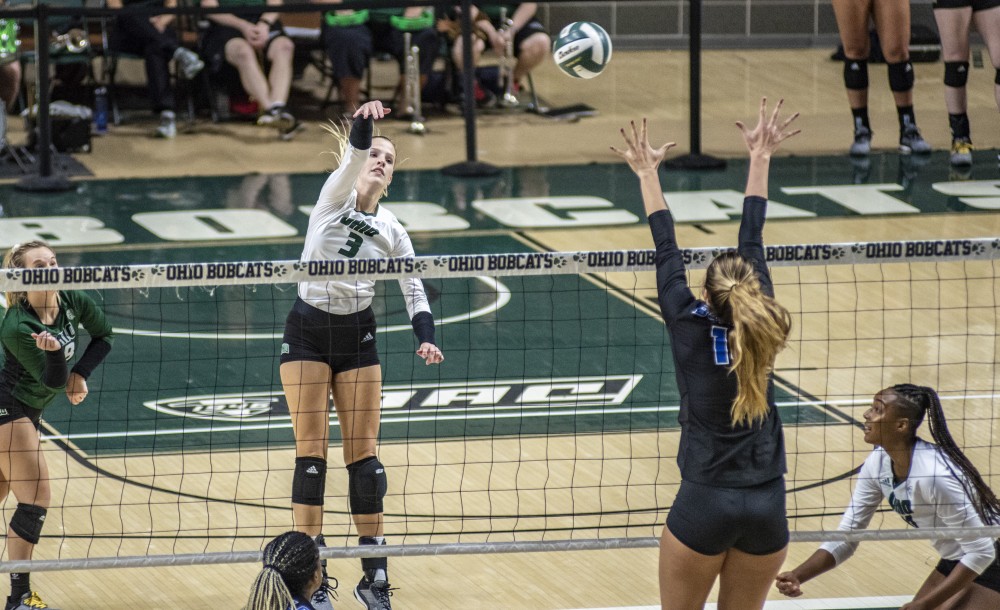 Ohio University outside hitter, Lizzie Stephens, hitting back row during the game against Buffalo University on September 28, 2018. (FILE)


Ohio had high hopes ahead of its 2018 season, but they quickly turned into a tough go-around as it only won 13 of its 31 matches.

The Bobcats’ home opener should provide them with a solid test when they host the Bobcat Invitational. This year, the College of Charleston, Connecticut and Virginia will make the trek to The Convo. The trio of teams went a combined 47-48 in 2018 and should provide Ohio a comfortable home opener.

Aside from the fact that the RedHawks are the Bobcats’ archrival, there are plenty of reasons for Ohio fans to get excited about this year’s edition of the “Battle of the Bricks.”

The game kicks off the first of four mid-week games for the Bobcats. Ohio’s loss last season to Miami kept it out of the MAC Championship game in Detroit, and it’ll look to win its second-to-last home game of the 2019 season.

It’s the only game played on the 150th anniversary of college football, so there will be plenty of national buzz in Athens.

When the Bobcats take the ice in Bird Arena against Michigan-Dearborn, they’ll hope to have the brightness of a new coach and new system under wraps.

UM-Dearborn headed into the American Collegiate Hockey Association national tournament last year as the No. 2 seed at 20-1-1. It was knocked out of the tournament by eventual national runner-up Iowa State, who also defeated Ohio en route to its championship appearance.

Ohio and UM-Dearborn haven’t played each other since the 2016-17 season where the teams split the series in Athens.

Any time Ohio State makes the quick 72-mile trip southeast, it draws the attention of all Bobcat fans. The teams met last year in Columbus where the Buckeyes won behind a 5-2 performance, but the Bobcats return a vast majority of its talent for the 2019 season.

Ohio (5-12, 2-4 MAC) had its ups and downs last season, but one of its ups featured a winning record at home. A marquee win or a close game against a Big Ten school in the middle of the season would be a big boost to the surging program.

Ohio renews one of its oldest nonconference rivalries this season when it makes the 81-mile road trip to Huntington, West Virginia, to play Marshall.

The Thundering Herd are one of the better teams in the Conference USA and return a bundle of talent including quarterback Isaiah Green, who threw for over 2,000 yards last season.