Helping the now by growing the future

T There was no big secret after Ohio’s annual media day in early August on what the program will need in order to be successful this season: depth and development. 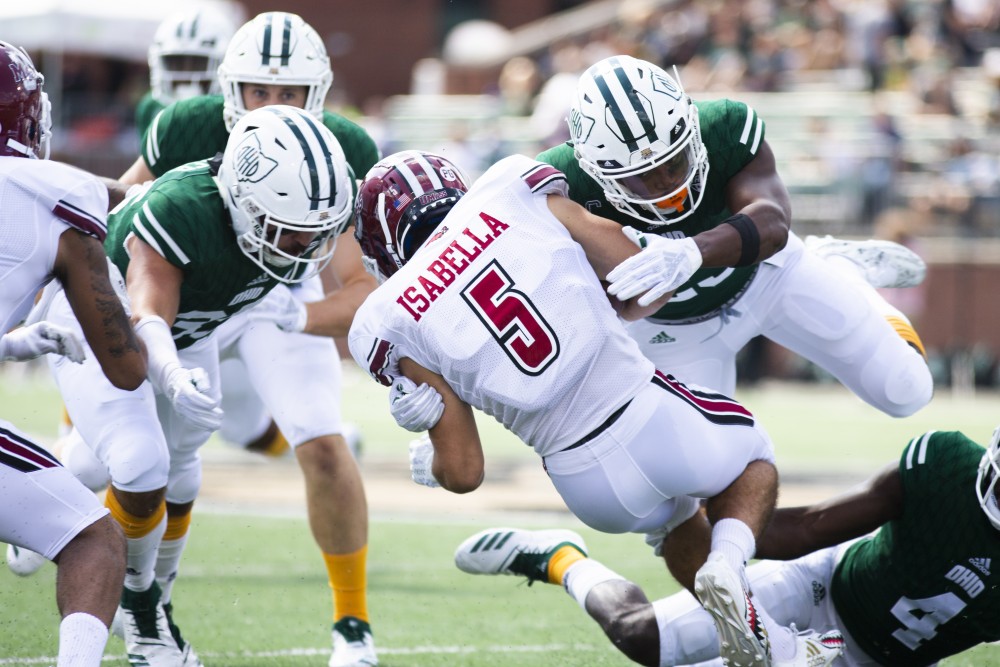 The Bobcats are fresh off a season where they had experience throughout their roster. The running backs, wide receivers and offensive linemen, in particular, were loaded with experience.

Now, Ohio is back to being a young team.

“We’ve got some positions where we are going to really have to work on developing depth,” coach Frank Solich said. “I really like the depth at a lot of positions, but there are some (positions) where we’re going to have to bring young guys along.”

Offensive tackle and the interior defensive line positions will boast the most depth on Ohio’s defense.

Redshirt seniors Austen Pleasants and Marques Grimes will anchor the starting left and right tackle spots on the offensive line. The duo has combined for 42 games over the course of the last two seasons.

Pleasants, one of five captains for the Bobcats this season, started all 13 games last season, while Grimes appeared in seven games in 2018.

Behind them, however, are plenty of question marks.

Following Pleasants and Grimes on the depth chart are redshirt sophomore Samson Jackson and redshirt junior Felipe Fernandez. The two appeared in only a combined seven games last season, six of which belonged to Fernandez.

Despite the lack of experience, Pleasants is eager to see the guys behind him grow throughout the season.

“It’s a daunting process,” he said. “Most of these guys aren’t used to coming out every single day the way we are. We’re just keeping things positive and trying not to overwhelm them with a bunch of stuff.”

Throughout fall camp, Jackson and Fernandez have grown more comfortable in the roles and look more confident as they’ve delivered impressive run blocks and have held their own against Ohio’s highly-touted defensive ends.

The other side of the ball is in a similar situation. Redshirt senior Bryan Arp and senior Cole Baker took the starting reps for Ohio in the interior during fall camp.

While the two didn’t start for the Bobcats last season, they did contribute heavily as they each appeared in all 13 games and combined for 35 tackles.

For the interior to have that experience at the forefront is a good thing not only for immediate results but for long term as well since the two can help interior defensive line coach Tremayne Scott develop the players behind them.

“(Arp and Baker) are doing a great job in coaching the younger guys, and that’s what I need as a coach right now,” Scott said. “They’re leading the room right now in a very good way.”

After Arp and Baker, the roster is comprised of a redshirt junior, three redshirt sophomores and a redshirt freshman who lack experience, but after the fall camp, Scott is confident they’ll all be ready for more playing time.

That’s been the purpose the whole month of August for Ohio. Establishing and developing depth will create a more solid foundation in regards to a couple of aspects.

If injuries mount, the coaching staff will feel confident in who will step up.

Second, the coaching staff can establish a rotation that not only helps the Bobcats keep players fresh during games but also create more challenges for the opposing offense.

Along with fall camp, the development and creation of the depth has opportunities to grow in the first weeks of Ohio’s nonconference schedule against FCS school Rhode Island and Group of 5 school Louisiana.

While the presumed starters for Ohio look to have solid performances against its nonconference opponents, it’s critical for that depth to earn in-game experience if the opportunity to rest starters arises.

But for now, it’s about doing the little things for starters and backups alike. Studying film, getting the footwork correct and knowing the playbook will help. Sure, there are advantages in being experienced, but those advantages are being used to create that depth.