South Green dorms Atkinson, Armbruster and Smith were demolished summer 2019, as their occupancy was replaced as part of phase one of the housing master plan. That plan resulted in the construction of Tanaka, Sowle, Carr and Luchs residence halls.

Despite the demolition, the only multi-occupancy spaces that will be in use for the 2019-2020 year are those rooms that were designated as a triple or quad, Executive Director of Housing and Residence Life Pete Trentacoste said.

The housing master plan allowed for weathered dorms, like Smith house, to not be used in the 2018-2019 academic year before the demolition.

Now that the dorms have been knocked down, discussions for long-term usage of the space are taking place. 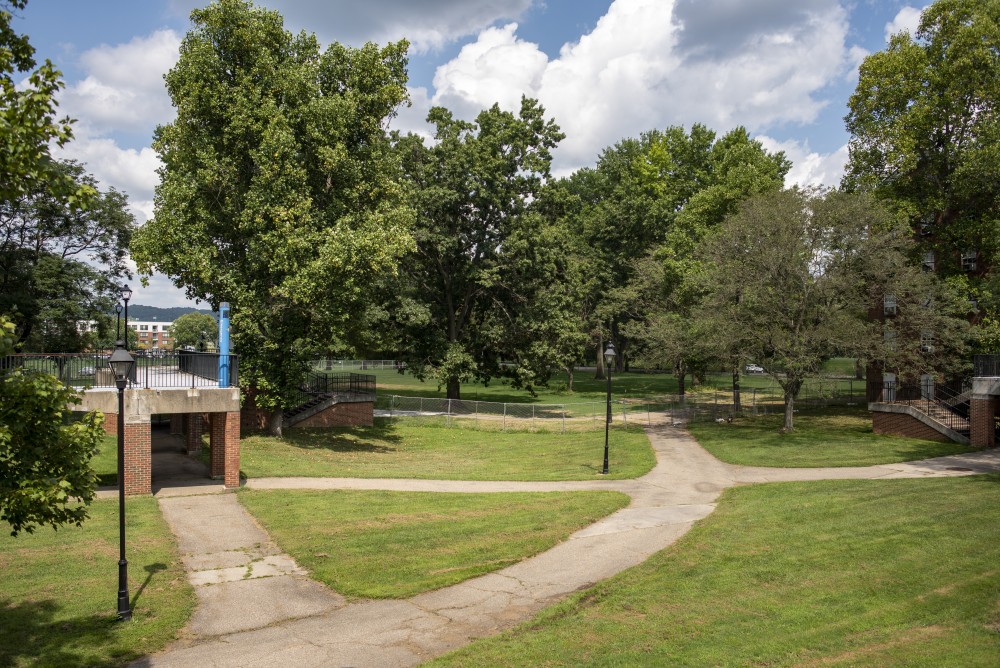 The back of South Green on Ohio University's campus that used to be home to many dorm buildings that have since been torn down.

“The current plan is to plant grass and make the area available as green space for our students,” Trentacoste said.

The worn appearance of the dorms has not kept students away from choosing to live on South Green. The mod-style residence halls have been providing a sense of community for students since the 1970s.

“My favorite thing was definitely how much of a family our half of the floor became and gave me some forever friends and people to talk to at any hour,” said Mary Pahoundis, a sophomore studying music education who lived in Armbruster. “I would knock on my neighbor’s doors almost daily so we could keep up with each other.”

Pahoundis said that the only thing she didn’t like about Armbruster was living there during extreme weather.

Mod-style dorms help foster a greater sense of community than traditional dorms, Hannah Moskowitz, a senior studying journalism, said. She partially attributes this to the common spaces that residents have to walk through to enter or exit their dorm rooms.

“Since it is a smaller number of residents sharing a common area and a bathroom, it’s easier to make friends and keep them throughout the school year and into their entire academic career,” Moskowitz, who lived in Ewing house, said.

The reduction in dorms on campus has also caused a slight reduction of the total number of Residence Assistants, or RAs, on campus, Trentacoste said.

The interview for RA positions had multiple parts. Questions regarding diversity and the position itself were asked to help recruit the best candidates.

“I think RA recruitment was extremely competitive because so many RAs returned, so there was less spots open for new RAs,” said Moskowitz, who will be an RA in True House this fall.