A new school year brings a new hockey season, and with that season comes a squad of new faces eager to create the identity of a new era for Ohio. Since the departure of former coach Sean Hogan and six seniors after the end of last season, new coach Cole Bell must direct his attention toward the players he’s got on hand.

Bell has managed to establish respect already among the team despite his fresh arrival to Bird Arena. Many of the players feel optimistic about Bell’s inaugural season and feel they can be top competitors come September. 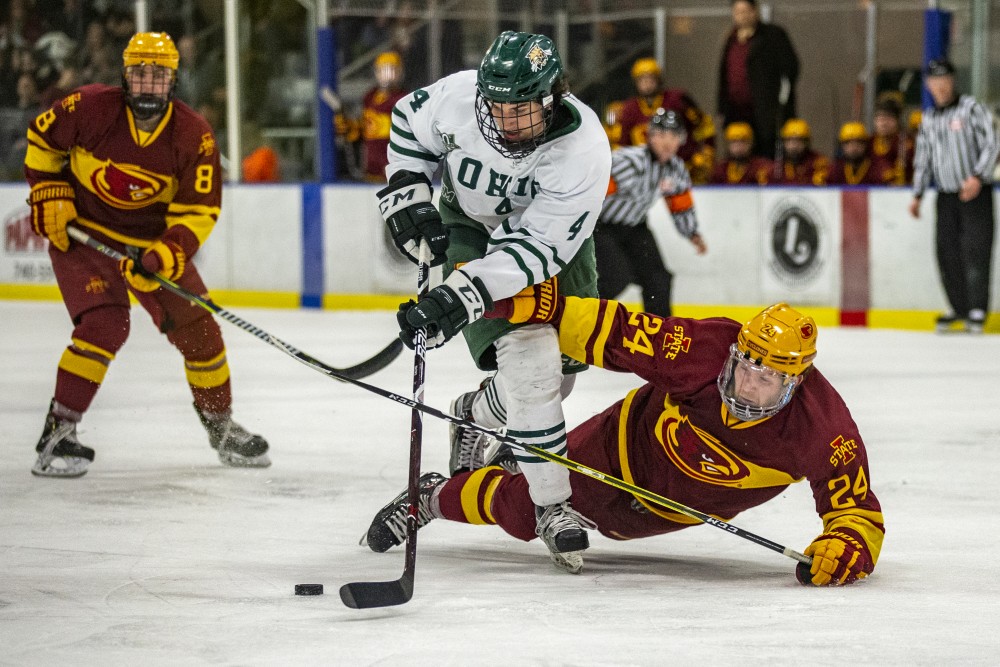 Ohio defenseman Thomas Pokorney (no.4) gets tangled up with Iowa State defenseman Kurt Halbach (no.24) during the second period of the Bobcats hockey game against the Cyclones on Friday, February 15, 2019, at Bird Arena. (FILE)

“I’m very impressed by Coach Bell and ready to go into battle with him,” forward Tyler Harkins said. “If we buy into his systems and philosophies, we can continue the success that we’ve had for so long.”

Harkins knows that he is now in the position of the seniors who just left. Harkins is one of the older, more experienced players for the Bobcats, and that means being the go-to guidance for newcomers in the program. It also means filling in the gaps seniors left behind alongside other vets for Ohio.

Defenseman Tom Pokorney is now in his fifth season with the Bobcats, thanks to a new rule implemented recently by the American Collegiate Hockey Association. Pokorney plans to use his experience as the oldest guy on the team and serve as a role model to his less-experienced teammates.

“Being the oldest guy on the team means being a leader,” he said. “I need to be an example to the young guys. A lot of stuff like cutting down on how many penalties I get is one big thing.”

Harkins and Pokorney aren’t worried about the underclassmen, though. Neither are any of the other upperclassmen. They know once the annual Green and White intersquad scrimmage comes around, everyone on the team will be able to step up and show what summer practice has really done for them.

“The CSCHL is the ‘creme de la creme,’ and every team is out there just like us. We all put our skates on one at a time.”-Tyler Harkins, Ohio Hockey forward

“I’m really looking forward to the Green and White scrimmage,” forward Gianni Evangelisti said. “That will be a good indicator of what we have for this year and the first chance for the new guys to showcase their skills.”

Evangelisti is one of the most dependable players for Ohio right now. He’s everything a good forward should be: quick on his feet, has excellent shot selection and is alert for all situations. He knows he can never be satisfied, however, so he’s been doing his best to make himself harder to defend.

“I think one thing I want to focus on is making plays while always moving with my feet,” Evangelisti said. “It’s a lot harder to defend a guy that is moving while making plays.”

Everyone else is doing their best to refine their game. Pokorney is looking to cut down on penalties, which kept him off the ice for 106 minutes last year. Harkins is focused on tightening his game and being a role model like the players before were for him.

As the season draws near, the Bobcats are looking to keep atop the ACHA standings. Last season, Ohio finished the year at No. 6 in the country after it lost to Iowa State in the semifinals of the national tournament.

Ohio made it to its league tournament game last season and will look to once again reach that spot but follow with different results. It lost to Lindenwood in the Central States Collegiate Hockey League championship, who at the time, held the best record in the ACHA.

With disappointing outcomes hanging on their heads from last year, Bell and his young core have plenty to work toward this coming season.

The Bobcats aren’t cocky about their rivals in the CSCHL. They treat their opponents with the respect they want to be given and are always looking forward to a fierce competition.

“Every game is just another game,” Harkins said. “The CSCHL is the ‘creme de la creme,’ and every team is out there just like us. We all put our skates on one at a time.”

One thing that all the players share is the want to get back to the regular season as soon as possible. Each player is counting the days until September when the new roster and new coach can show that they haven’t slowed down.

“We’re all excited to get back to Bird,” Harkins said. “Putting on the jersey and having the Ohio across your chest, there’s really nothing like it. It’s the best feeling in the world.”