Athens football: New pieces but plenty of experience return for 2019

2 019 embarks a new journey for Athens as it shifts away from comfortability to unknowns for the first time in over a decade.

Former offensive coordinator Nathan White will be taking over for Ryan Adams. The former head coach led the Bulldogs to a 96-37 (.722) record over 12 seasons and to their first-ever playoff win.

Athens will be looking for new leadership on the field as well after it lost 20 seniors, including starting quarterback Clay Davis. 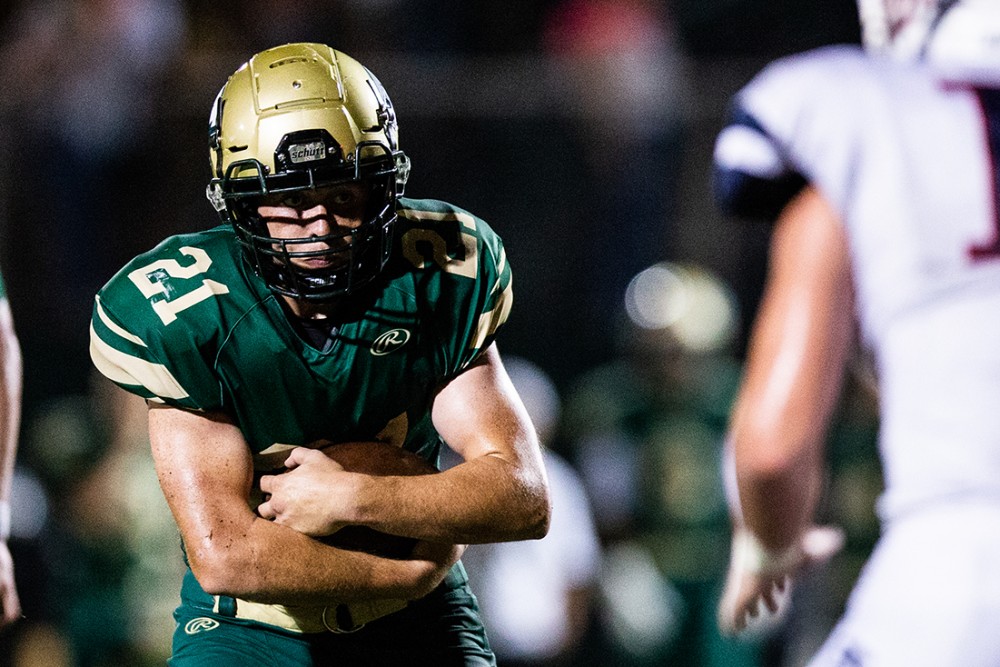 Evan Adams, (no. 21) of Athens High School, goes to complete a run in the late stages of the game against Parkersburg South. Adams had four touchdowns on the night and was the main contributor to the Bulldogs' 26-16 victory over the Parkersburg South Patriots. (FILE)


Despite the exciting 9-2 season that featured their first playoff appearance since 2014, the Bulldogs have two big questions in two important spots.

“They’re two of my favorite coaches I’ve ever had,” Nate Trainor, who had over 500 receiving yards and four touchdowns in 2018, said. “I think the biggest difference may be that Coach White’s the more offensive-minded kind of guy. He was kind of the no-brainer, and we’re all excited to have him now.”

Last season, Athens scored just under 39 points per game with White running the offense, the most since Joe Burrow was the quarterback in 2014.

Scoring points isn’t the focus of the Bulldogs just yet. They are focused on getting better.

“As far as scoring points, we don't talk about it,” White said. “The points on Friday night may or may not come, but we try to make sure that we take advantage of each day with the goal of becoming a better football team every single day.”

Perhaps the player with the most to prove is senior Joey Moore. Moore served as the backup quarterback last season. Moore is relatively inexperienced at quarterback, as he went just 9-13 with 116 yards and one interception in 2018.

While he hasn’t spent much time under center, he does have experience at other positions, such as wide receiver and running back. Last season, he had a combined 433 yards and four touchdowns at the respective positions.

“Joey’s great. I think he’s going to have an awesome year,” Trainor said. “He’s a great teammate. He holds everyone accountable, and he’s always going to be one of the hardest workers on the field.”

Moore will need to have an awesome season, as Clay Davis led the way for Athens last season with just over 1,700 yards, 14 touchdowns and seven interceptions. Davis also rushed for 676 yards and 10 touchdowns.

This will be a lot for the new quarterback to replace, especially given his lack of experience at the position.

His coach has been impressed, however, with his development prior to the start of the season.

“Joey is a talented player who works hard daily to become a better quarterback. Most importantly, Joey has become one of our leaders,” White said. “I can't stress enough how important it is for our quarterback to be a leader, as leadership and confidence are the two most important quarterback traits, in my mind.”

Arguably the most challenging part of the season for Moore and the Bulldogs will be the beginning.

Athens faces Waverly and Jackson in the first two weeks of the season, both of which were in the playoffs last season. Waverly finished fifth in its region last season and Jackson finished seventh, one spot ahead of Athens.

Those two teams, along with Parkersburg South (West Virginia) who the Bulldogs will play in week three, are the only teams on this year’s schedule that finished with a winning record in 2018.

These will be the three most important games of the season, given a four-point loss to Fairland last season nearly kept Athens out of the playoffs.

But the playoffs are not on White’s mind at all. In fact, he hasn’t even started thinking about week one.

“I truly haven't thought about the playoffs once. We have a brand-new football team with many new players, and several of our returning players are playing different positions,” White said. “I know it sounds like coach-speak, but we truly focus on each day. We haven't spent any time talking about week one against Waverly and certainly haven't talked about the playoffs.”

Week 11 is far away, but with week one looming, White has a simple message for his team: “Let's make sure today is the best day we've ever had.”