2018 Volleyball Storylines: Ohio is finally healthy and ready to reach its full potential

It’s cliché and unsurprising, but after Webb saw a promising 2017 season crumble from injuries to his key players, the fifth-year coach has been anxious to hit the restart button.

No more injuries. No more shifting players around to positions they’ve sparingly played. It’s a clean slate, and it’s what Webb needs.

He wasn’t proud of the Bobcats’ fourth-place finish in the Mid-American Conference East Division in 2017. In the preseason coaches poll, Ohio was originally picked to finish second, but that was before an injury bug (or two or three) plagued the team. Webb thought Ohio still maximized its potential, but the significant injuries to several of the team’s core starters lowered the team’s maximum potential.

“I think we're a good enough team this year to play for a while to go into the postseason. If we're in that situation, then we're going to make sure that we still have quite a bit left in the tank that time of year.”Deane Webb

“Oh boy,” Webb said before he recalled which players suffered injuries in 2017.

His two captains, Jaime Kosiorek and Katie Nelson, were each out of the rotation and into long-term recovery mode just four games into the season. In the same August match against Dayton, Kosiorek suffered a torn ACL and Nelson suffered a concussion. Kosiorek was out for the year; Nelson didn’t return until 24 matches later and played in just four games the rest of the season.

Kosiorek, who was second on Ohio with 360 kills in 2016, will return in 2018 as a fifth-year senior after receiving approval for a medical redshirt year in 2017. Nelson is also set to return as a redshirt senior.

Other lower-body injuries forced middle blocker Simone Miller and outside hitter Carley Remmers to miss extensive time (both are also set to return in 2018). Sprinkle in the other smaller injuries that are frequent throughout any one season, and it’s easy to see why Webb is happy to finally have a healthy team again.

In his 20 previous years of coaching volleyball, Webb said he never had as many players go down with lower-body injuries than he had in 2017. In fact, in those 20 years prior, he had just two players suffer significant lower-body injuries.

“Part of it is just kind of a flukey thing, you know?” Webb said. “So it's like, 'Alright, we got to change what we're doing. Why is this happening?'”

So what changes does Webb have in store for 2018? According to him, it’s nothing serious, but Ohio will have “No-Jump Wednesdays.” Take a guess at what that means. 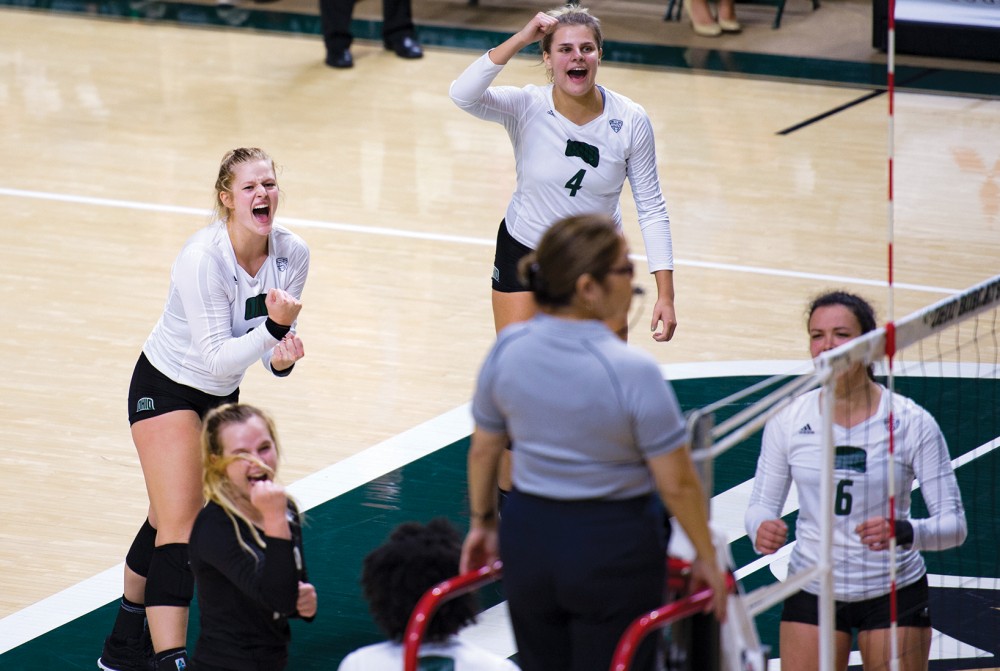 Carley Remmers (left) and Sara Januszewski cheers with the team after a point during Ohio's game against Miami on September 29, 2017.


In addition to keeping their feet on the floor every Wednesday, the team is lowering it’s amount of jumps they aim to take every practice from 100 to 80. The Bobcats have been tracking how many jumps they take per practice for the past three years using the “VERT” app on an iPad.

The tweaks won’t have any instant impact besides potentially lessening the chance of a flukey jump that results in an injured ankle or knee.

From a long-term perspective, however, Webb hopes the practice adjustments conserve energy over the course of the four-month season.

“I think it's more just trying to address some of the chronic (injuries) and the fatigue,” he said. “You get worn down every season. I think we're a good enough team this year to play for a while to go into the postseason. If we're in that situation, then we're going to make sure that we still have quite a bit left in the tank that time of year.”

Ohio graduated just one player from 2017 and currently has a roster at full strength. The Bobcats also added five freshman, some of whom Webb believes are capable of stepping right into the rotation.

Webb didn’t offer any hints on what formation he’ll utilize to maximize his team’s potential. He doesn’t plan on finding out until after Ohio’s first preseason game against Pitt on Aug. 18.

No matter when he decides, however, Webb will have some tough decisions to make.

The Bobcats currently have seven outside hitters, including Kosiorek, Remmers and Lizzie Stephens, who broke out amidst the 2017 injuries and led the Bobcats and the MAC with 443 kills and 60 service aces. Stephens, a junior, played in all 32 games last season.

Someone, if not multiple players, who received abundant playing time after last season’s fleury of injuries will see significantly less time on the court in 2018. It’s inevitable, and Webb knows it’s an issue.

“That is an outstanding problem to have,” he said.