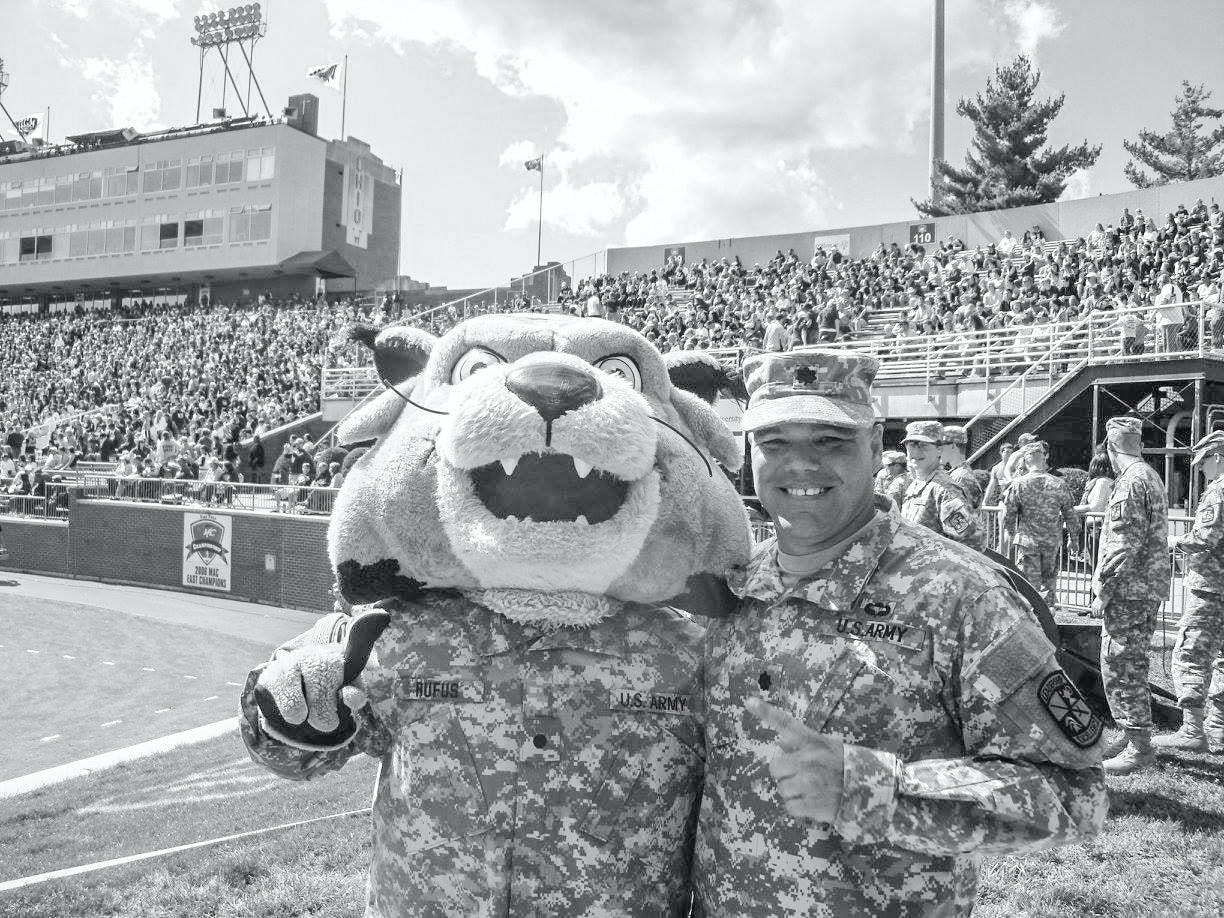 Life after serving looks different for everyone, especially college students

People enlist to join the U.S. Armed Forces for a variety of reasons. Some act upon their patriotic urge to serve their country. For others, the appeal lies in the desire to see the world.

At Ohio University, there are around 700 Veterans enrolled. These are classified as students who served or are currently serving in the U.S. military. Whether that be serving as a pilot for the Air Force, or a corpsman for the Marine Corps, 700 Bobcats want to protect their country.

Transitioning to college is hard for anyone, but transitioning from a soldier to a student is a whole new ballgame. Many student Veterans are older than their peers and have experienced much more of what life has to offer. Tardiness is no longer punished with pushups; uniforms are the only acceptable form of attire.

More than the situational changes is the evolution of identity. Especially for those no longer on active duty, a giant piece of who they are is different. No longer a defendant of the Constitution but rather a member of civilian life.

The military and mental health

Military service often affects Veterans’ mental health. According to the U.S. Department of Veterans Affairs, the number of Veterans with post-traumatic stress disorder, or PTSD, varies by service era. Between 11-20% of Veterans who served in Operations Iraqi Freedom and Enduring Freedom have PTSD.

Amber Everett is among the 12 million adults in the U.S. who have PTSD. Everett, who uses a pseudonym to keep anonymity on the condition of privacy, is an Air Force Veteran. Stationed at a garrison, a military post, Everett worked mostly with drones and full-motion video. Essentially, she supported downrange troops via computers.

With her brother in the Air Force and her dad being in the Army, Everett wanted a challenge so the military was the natural next step. Using her passion for math, Everett aced the entrance exam and began her service.

Prior to her military service, Everett said she never really had any difficulties with her mental health. Besides being an angsty teen, she said everything was smooth sailing. Now, Everett has been diagnosed with PTSD, borderline personality disorder, major depressive disorder and generalized anxiety.

“It kind of all started when I started killing people for a living. Every time I see a new doctor, they give me a new label.”- Amber Everett

Everett said her main symptom is nightmares. Whether asleep or awake, she said flashbacks are frequent and can be triggered by various things.

Everett discussed a class she was in where police brutality and Islamophobia were frequent topics and weren't always talked about in the most careful of ways. Although holding no ill feelings toward the professor, Everett feels there are better ways to talk about certain triggering topics. She suggests faculty provide a questionnaire to learn their students' triggers.

"I'm not saying she's doing it bad at all," Everett said. "I'm just saying people need to better know their audience. I know people like to talk about snowflakes or whatever, but it's a real f—---- deal."

A big obstacle Everett faced was overcoming hearing common words that she associated with her service. Having worked with a lot of video and digital equipment, everyday words such as "camera," "video," or "cellphone" used to send her in a spiral.

"There was about a year and a half to two years where I could not play video games,

Everett said. "I used to play video games a lot when I was younger … I had a really hard time separating my memories and the reality from the game itself."

According to Stop Soldier Suicide, Veterans are 57% higher risk of suicide than those who haven't served. Suicide is also the second leading cause of death in Veterans under age 45.

Having survived past suicide attempts herself, Everett said her first attempt was while she was still in the service, a little less than a year before her separation. She spoke about having to help herself through that.

"There's a point in life where you have to choose to live, regardless of the baggage that you carry," Everett said. "That's a very difficult point to reach and going through all this, I feel like I've reached it."

If any Veterans are contemplating suicide, visit this website or dial 988 for the Suicide and Crisis Lifeline.

From basic training to the books

In most cases, enlistees sign up for four years of active duty and four years of inactive duty. For all six branches of the military, Army, Navy, Air Force, Coast Guard, Marine and Space Force, the requirements to join are relatively similar. All interested parties must be at least 17 years of age to enlist and be U.S. citizens or possess a Green Card.

After taking a variety of tests, receiving a high school diploma or GED, meeting with a career counselor and completing the service's physical requirements and fitness standards, aspiring service men and women are permitted to take the oath of enlistment.

After some coordination, recruits will receive orders for basic training. For the Army, basic training consists of 10 weeks focused on combat training, specialized training in the desired career field and general military basics such as weapon handling, teamwork and discipline.

Thanks to Fort Benning, Georgia, however, the two freshly-graduated high schoolers began their time in the service together. Barnes said relationships built during the service are unlike any others. Strangers are thrust into intimate situations where friendship is the only option.

Rogers shares a similar experience to Barnes. His experience with bonds created in the military have to be rivaled.

In addition to one on one relationships, Rogers enjoyed the camaraderie that came with the service. The sense of teamwork and codependency is something unique to the experience.

“Just feeling like even though I was kind of a cog in the machine, it was a good machine. And I felt like I was a part of something greater than myself.”- Seth Rogers

Riley Black, a senior studying management and strategic leadership has a different story than her Veteran peers. Enlisting to join the Army National Guard at 17, Black comes from a military family.

Her first six years in the National Guard have almost come to an end. Because of the nature of her branch, Black has been serving and attending college simultaneously. At this point in her military career, she works for the Guard one weekend a month and two weeks in the summer.

Even though it may appear like a lower commitment, there is the chance Black could be activated at any given moment. Black enrolled in the spring of 2019 after spending fall completing Advanced Individual Training. Following a summer in California working for the Guard, Black returned to campus for fall but was not on campus in the spring but rather preparing for deployment overseas.

She was overseas for a year, and she returned in the summer of the following year. After that, she was activated again to help with COVID-19 relief in Columbus. It is clear that earning her degree has been seriously altered by the military, but Black remains positive about her experience thus, grateful to OU.

"I've taken four and a half semesters off," Black said, laughing. "I love serving and being in the military, and I'm very grateful to have a school that has been so supportive of that. It's definitely been worth it."

Thanks to her many credits entering college, Black has only had to spend five years at college to earn her four-year degree. She has an interesting outlook on the process because she said she has avoided burnout. Her easy going nature made it possible for her to switch her surroundings so frequently. However, Black has to deal with being apart from her friends while serving and being at college.

"It's a big change going from being overseas in the Middle East for a year to being in class," Black said. "You just have a different mindset of complaints and stuff. I would definitely say it's been kind of hard sometimes to make those connections just because I feel so different from them sometimes."

Support in a new environment

Terry St. Peter, director of the Veterans and Military Student Services Center, is a retired lieutenant colonel for the U.S. Army. St. Peter, as well as the Center, are responsible for facilitating programs for military-affiliated students at OU.

"We oversee VA education benefits," St. Peter said about the program. "Everything from assisting folks in applying for those benefits, to utilizing those benefits to help problem solving with those."

St. Peter and the Center also help establish their students' policies and procedures. Sometimes, military personnel will get "activated" and required to serve. St. Peter ensures the process of the student withdrawing from school is as smooth as possible.

Additionally, St. Peter is a support system. With him being in the military himself, he can relate to the student's experiences. He strives to make OU a place that uplifts the military rather than burdening its military-affiliated students.

Additionally, to ensure faculty has the resources necessary to be best equipped to teach and interact with Veterans, St. Peter teaches a class to university staff. In his workshop, he incorporates a student panel who discuss their experience.

Additionally, St. Peter also teaches a class for students. Although not mandatory for Veterans, they have the opportunity to enroll in a learning community-style class geared specifically to them.

"I teach a UC 1500 course that is a transition seminar where I focus on things like moving from a military culture to an academic culture," St. Peter said. "It's extremely different."

In the seminar, the class discusses topics ranging from what happens if someone is late to class, to handling a common question geared toward Veterans: "have you ever killed someone?" Because Veterans are in such a different boat than traditional first-year college students, St. Peter believes this class should be mandatory for Veterans.

In fact, none of the services the Veterans and Military Student Services Center offers are mandatory for students. According to St. Peter, students are not required to disclose they are a Veteran since it is considered a protected status. He said the thought of a student Veteran not being supported is the hardest part of his job.

“The things that keep me up at night is that they could be struggling without getting the help they needed. They didn't know the resources here because I didn't even know they were here.”- Terry St. Peter

Veterans who are using benefits, such as the GI Bill, must denote their military involvement. Other than that, there is nothing that makes it mandatory, St. Peter said.

St. Peter is transparent about the negative connotations associated with the military, and he feels more could be done to paint servicemen and women in a positive light.

However, St. Peter acknowledged some of the faults of the U.S. Military.

With any transition, there are ups and downs. Instead of camping out in a military base in Iraq, Barnes and Rogers were residents of university dorms. Instead of supporting troops via computers, Everett was wrestling with calculus problems. Even the most trivial of things were different.

"I had a terrible, terrible wardrobe when I got out," Barnes said. "I mean I had a work uniform and then I would go out on the weekends but now, I need like seven days worth of clothes and variety."

Swapping a warzone for a classroom is difficult, especially when it is full of students who are unaware of what their peers have witnessed, done, and experienced.

"Don't be afraid to engage a Veteran and ask them about their time and service," St. Peter said. "Don't be afraid. We welcome that.You will come to find out that most of us would enjoy the opportunity to tell you a little bit about what we did."