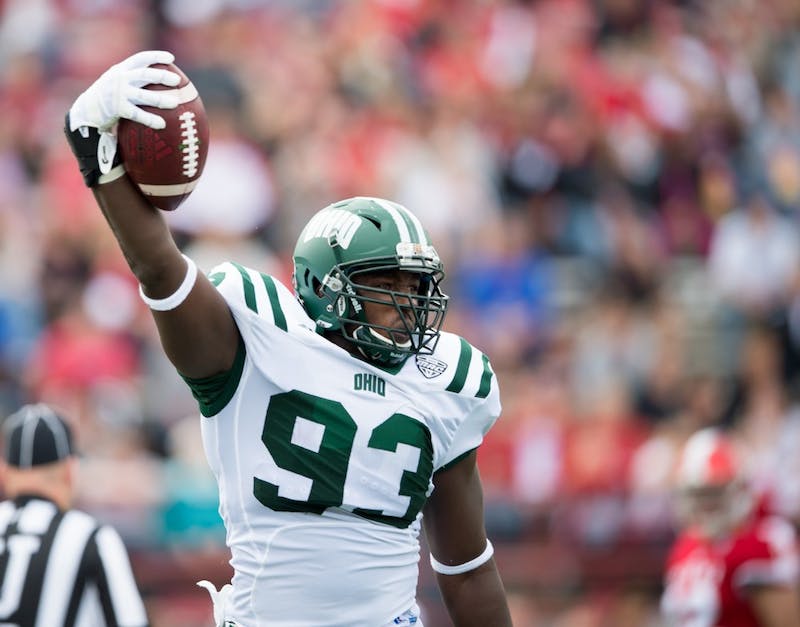 Correction: A previous version of this story incorrectly listed the number of sacks in Basham's senior year and career. The article has been updated to reflect the most accurate information.

Tarell Basham lowered into in his stance with his head lifted slightly, his eyes filled with emotion as he peered through his white face mask.

He’d probably done the drill a million times in his life. At its core, it was just another repetition from just another practice.

But this was Senior Bowl practice. And this time, Basham had to go through a mammoth.

Zach Banner, a tackle from the University of Southern California, leaned in opposite Basham. Banner is 6-foot-9 and 360 lbs, and he’s projected to be a third-round draft pick.

Banner had every advantage, at least on paper. The size, notoriety, and even the helmet he wore seemed to be in Banner’s favor. The Trojan on Banner’s helmet is one of college football’s most recognizable logos. Basham’s Ohio arch was the only one at the Senior Bowl.

Basham, a defensive end, was one of Ohio’s most productive players in program history. Now, he’s headed to the NFL Draft in April.

He said attending Ohio University was something he’d recommend to anyone. However, he didn’t make that choice himself.

His mother, Glenda, made the decision before Tarell. Once her mind was made up, it was easy to get Tarell to Athens.

“I loved coach Gdowski …  just the way he came to me and spoke about the school,” Glenda said. “I think I helped make Tarell’s mind up.”

The Rocky Mount, Virginia, native graduated from high school, then a postgraduate military academy, where his mom helped him make the decision to become a Bobcat. 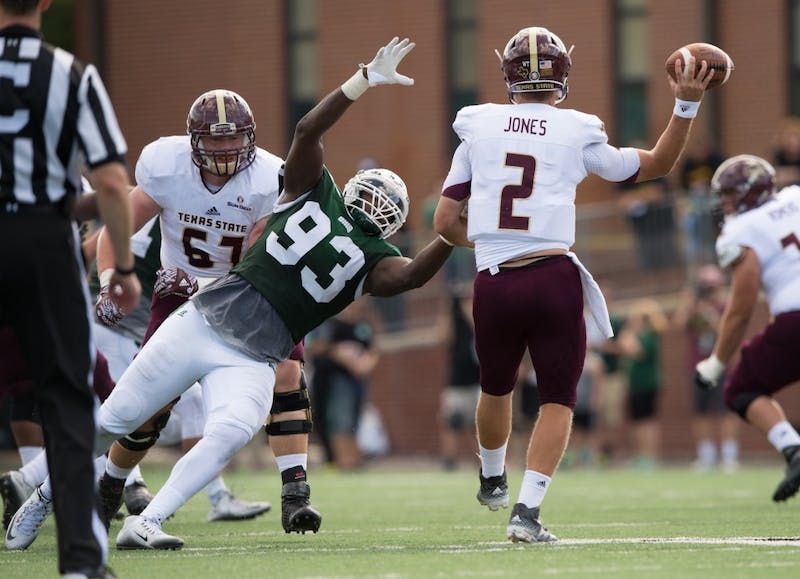 He won Mid-American Conference Defensive Player of the Year his senior year as a result of his nine sacks and 49 total tackles. His 11 1/2 sacks are an Ohio season record, as are his 29 1/2 career sacks. The latter ranks fourth in MAC history.

“All the hard work I put into my career, the season, the offseason in order to have a good season, it all paid off,” Tarell said.

Tarell was part of a defense that ranked sixth in the nation in run defense and tied for 12th in sacks. His simple appearance on the field forced teams to run plays away from him.

“His presence on the field raised our level of defense to a level that we hope to sustain,” defensive coordinator Jimmy Burrow said.“... people know about Ohio University and how good of a football team we had this year. A big part of that was Tarell.”

And as his senior season progressed, Tarell’s name appeared more and more on draft boards. He was also invited to the Senior Bowl, an annual game for the country’s top seniors in Mobile, Alabama.

As his rise continued, something more important happened: He graduated.

Tarell was the first member of his family to attend college, and in December, he graduated with a bachelor’s degree in specialized studies with a focus on marketing and communications.

“I feel like I set the tone for my younger siblings to go to college and to make something of themselves,” Tarell said. “Football will not always be there, but I’ll always be a Bobcat, I’ll always be an alum of Ohio University.”

As Tarell’s time wound down at Ohio and the accolades rolled in, he had to focus on the next part of his life. Fortunately for him, help wasn’t too far away.

Ohio’s Sports Administration program is known as the best in the country. That’s what drew Aaron Henderson to Athens.

After Henderson graduated in 2015 with a master’s degree in sports administration, he was introduced to Tarell. The two hit it off so well, Tarell signed with Henderson, who partnered with Priority Sports to co-represent Tarell.

To some, a MAC player that had late-round grades entering the season possibly going in the first round seemed like a stretch. Then, the Senior Bowl happened.

“I told him he had the potential to be a second-round pick, and he told me, ‘I’m shooting for first round,’ ” Henderson recalled. “That’s exactly what I want to hear.”

Mike Mayock, an NFL Network draft analyst, said on the NFL Network on Jan. 26 he thought Tarell would be a second-round pick.

“A lot of teams had questions about me going into the week,” Tarell said after Senior Bowl practices. “But I’m pretty sure they don’t have those questions anymore.”

Tarell Basham bench presses with a trainer at EXOS in Carlsbad.

After Senior Bowl week, Tarell went out to San Diego to train for the NFL Combine, which will take place from Feb 28 to March 6 in Indianapolis.

His speed and size allows teams to view him as a typical 4-3 defensive end, or even a 3-4 outside linebacker. Wherever a team decides to use the 6-foot-3 1/2 inch, 259 lb athlete, he’ll have the ability to play that position well.

“We see that Basham has earned 28.2 percent of his pressures to the inside in 2016,” Zoltán Buday, the Group of Five lead analyst for Pro Football Focus, said in an email. “This suggests someone who uses his strength well.”

Tarell is gaining more notoriety, seemingly by the day, and he now has a legitimate chance to be the highest Bobcat draft pick since 2009, when Mike Mitchell went 47th overall.

“Sometimes when I think about what he’s doing and where he’s going, I get chills, I get butterflies in my stomach,” Glenda said. “I can only imagine how he feels. It’s kind of unbelievable.”

As for Ohio, Tarell’s impact won’t be apparent until next season, when his replacement has to replicate the statistics of the program’s best pass rusher.

“He loves the game and is willing to work at it to be the best that he can,” Burrow said. “He certainly isn’t afraid of hard work that’s necessary to be a great player. ”

One of the things Henderson hasn’t had to worry about is Tarell’s attitude. For some NFL teams, that can make a player undraftable. For Tarell, it’ll be a positive.

“He brings it relentlessly every day,” Henderson said. “That’s the coolest thing about Tarell: He loves to come to work, he’s definitely a lunch-pail type of guy.”

Tarell is currently projected by CBS Sports as a second-round pick. An NFL player would be a great accomplishment for Tarell and the program — there’s just three other players from Ohio currently on a roster. But for Tarell, that’s not enough.

The first round of the draft, occurs on April 27 and the second and third rounds are the 28th. For now, it looks like Tarell will know his NFL team and future on the 28th — but you might want to tune in on the 27th, just in case.

“... I was non-stop, 100 percent trying to beat the hardest goals out there for someone in my shoes,” Tarell said. “Maybe I make it, maybe I don’t. I’m never going to set myself lower than the best.”