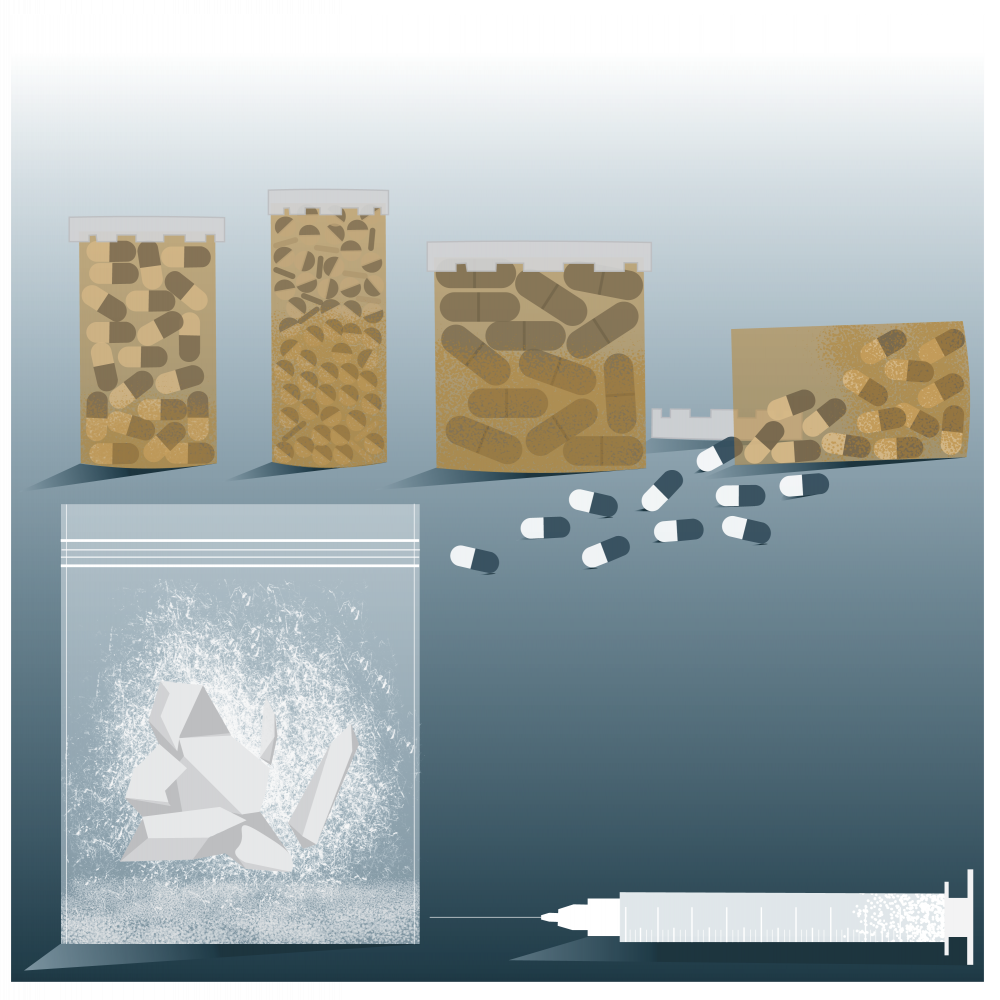 Why stimulants might be the future of Ohio’s drug epidemic

When Nelsonville Police Chief Chris Johnson, found 13 needles on someone he was arresting in December, the suspect admitted what she was using them for.

The woman, who Johnson said he was arresting on a warrant, said she used the needles for meth.

It wasn’t a surprise for Johnson, who formerly worked at the Ohio University Police Department and moved to Nelsonville a few years ago — he’s seen a steady rise in the use of methamphetamines since he’s been the head of the small department.

“Heroin use has been going down for some time now ... and that void has typically been filled by methamphetamine,” Johnson said.

As the state has slowly recovered from a crippling opioid epidemic, methamphetamine and other stimulants have made a dramatic comeback across the state.

For Johnson, the head of a small department that polices a city of 5,000 residents, resources are already stretched thin. With limited jail space and limited time to make convictions, Johnson says his department often faces decisions over whom to incarcerate and whom to charge and let back onto the streets.

“Meth is becoming way more prevalent than it has been,” Johnson said.

Johnson’s department is far from the only one in Ohio that has dealt with the return of the drugs: The Ohio State Highway Patrol has seen an increase in seizures around the state.

The agency’s 2018 methamphetamine numbers were more than the last several years combined. Patrol officers seized 454 pounds of the substance in 2018, according to data provided by the patrol.

The increase in methamphetamine-related crimes has had deadly consequences.

From 2010 to 2017, deaths related to psychostimulants increased more than 5,000 percent, according to a report from the Ohio Alliance for Innovation in Population Health.

More than 70 percent of those deaths coincided with the presence of another drug — the powerful opioid, fentanyl.

Orman Hall, an expert on substance abuse who authored the report for the Ohio Alliance for Innovation in Population Health, said he was a bit surprised by the sheer level of increase the state had experienced. The increase was probably related to the opioid epidemic that has claimed the lives of thousands of Ohioans in previous years, he said.

Hall emphasized, however, that there isn’t one cut-and-dried answer for the return of stimulants. A wide variety of causes could be blamed.

One hypothesis that Hall put forward is an increased use of psychostimulants in medicine.

“During the period between 2012 and 2017, we saw about a 30 percent decline in opioids dispensed,” Hall said. “We've seen about that same level of increase in psychostimulants.”

To Sellers, the increase in and lacing of methamphetamines with fentanyl is directly correlated to organized crime. He said the cartels have been mixing extremely addictive opioids like fentanyl with drugs like cocaine and methamphetamines to make people dependent on them.

“Drug cartels operate just like any other business,” Sellers said. “Once they establish a market, they'll start pushing in their other products. The spike in meth, there's a direct correlation between that and all the heroin that's been pushed into Ohio.”

According to an Ohio Department of Health report on overdoses in 2017, heroin and prescription opioids are on the decline while stimulants, along with fentanyl and carfentanil, another powerful opioid, are on the rise.

For some, the shift away from pills and heroin toward stimulants and fentanyl is indicative of a shift in Ohio’s drug epidemic.

While Ohio is still struggling with opioids, the rise of stimulants might be a part of the next phase of drug addiction in the state.

Andrea Boxill, who was deputy director of the Governor’s Cabinet Opiate Action Team for former Ohio Governor John Kasich, said Ohio’s drug epidemic isn’t a problem with one particular drug, but with the disease of addiction as a whole.

“The resurgence of meth is related to the drug epidemics that we’ve had, not just on the past six to eleven years around opioids, but the epidemic that we’ve had since we started abusing drugs illicitly,” Boxill said. “This is like the next phase.”

“Addiction should be looked at as a whole. We tell our patients, in the first twelve months you have to be careful. Shopping, gambling, eating, those are all addictions. If we don't take care of addiction as a whole, you're going to divert addiction to something else.”Burt Dhira

The disease of addiction, Boxill said, has remained steady throughout cycles of drugs. From the crack epidemic to the first epidemic of meth, Boxill said addiction is at the core of the problem.

“There’s always been a desire to feel better,” Boxill said. “It doesn’t matter the drug. It’s what (is) at the root, which for many people is a lack of hope.”

Burt Dhira, who heads the Ohio Addiction Treatment Council and operates a recovery center in Columbus, said addiction manifests in many forms.

“We really have to work on the whole person’s recovery,” Dhira said. “Addiction should be looked at as a whole. We tell our patients, in the first twelve months you have to be careful. Shopping, gambling, eating, those are all addictions. If we don't take care of addiction as a whole, you're going to divert addiction to something else.”

Dhira added that he has seen a huge uptick in methamphetamine users at his clinic in the last year or so.

Addiction treatment centers are also seeing increases in methamphetamine and psychostimulant use locally. Ellen Martin, the CEO of Health Recovery Services in Athens, said her organization has been dealing with an increased number of people addicted to stimulants.

Hall noted that the drug at the epicenter of addiction has changed over the years. He said that heroin first became prevalent in veterans after the Vietnam War.

Cocaine had a more than 600 percent increase from 2010 to 2017, according to Hall’s research, and has been mixed with fentanyl and carfentanil as well.

When Boxill was assigned to the opiate task force, Ohio wasn’t ready for an addiction epidemic.

Ohioans were dying of opioid overdose at record rates. As more Ohioans switched from dangerous prescription opiates to deadly illegal drugs such as heroin, the state scrambled to find a solution.

“The first thing we had to do was to stop the bleeding,” Boxill said.

Stopping the bleeding meant equipping law enforcement with the overdose-stopping drug Narcan. After Narcan began to save lives, the task force used the breathing room to come up with a plan.

Increased access to treatment, prevention measures and public awareness were all parts of the task force’s process to address addiction. Boxill said that an increasing public awareness of addiction as a disease helped to slow the epidemic.

The opioid epidemic forced a mass collaboration to address it, Boxill said, and the same must be done for the rising use of stimulants.

“In order to address any epidemic we had to come up with a template of what needed to be put in place,” Boxill said. “Whether it’s methamphetamine or heroin or fentanyl, we have a pretty proven formula of what needs to happen.”

Hall said efforts to combat the opioid epidemic will help the state deal with future changes in drug use across the state.

“There has been a significant increase in availability of treatment in our state largely due to the opioid epidemic,” Hall said.

The road ahead won’t be easy, Boxill said. She said the road to understanding addiction as a disease rather than a choice has been a long one.

“It took us a good 70 years to get to the point of accepting, and we still haven’t done it fully, that the disease of addiction is just that: a disease,” Boxill said.

She estimated that 60 percent of the population believes that addiction is a disease, but she fears that a rise in stimulants could undo some of that work.

“I don't think any drug is safe. If you're doing drugs you're getting a lot of cross-contamination. I have a lot of patients come in doing certain drugs and I see other stuff that is in their drug confirmation. They'll be blown away by what we find.”Burt Dhira

“It’s all a disease, but people will change their perception based upon how the media portrays it and the types of crimes that are being committed as a result of the use,” Boxill said.

Dhira said he fears that drugs laced with fentanyl will continue to be lethal for those who use them.

“I don't think any drug is safe,” Dhira said. “If you're doing drugs you're getting a lot of cross-contamination. I have a lot of patients come in doing certain drugs and I see other stuff that is in their drug confirmation. They'll be blown away by what we find.”

The opioid epidemic left behind a legacy of progress in the field of drug addiction, Boxill said, and that same progress needs to be continued with the new wave of stimulants.

Sellers encouraged users to not just get help, but also be aware of what they’re using.

“If you are a user, you need to know what you're ingesting so you don't become an overdose statistic,” Sellers said. “And if you need help, there's plenty of resources out there.”