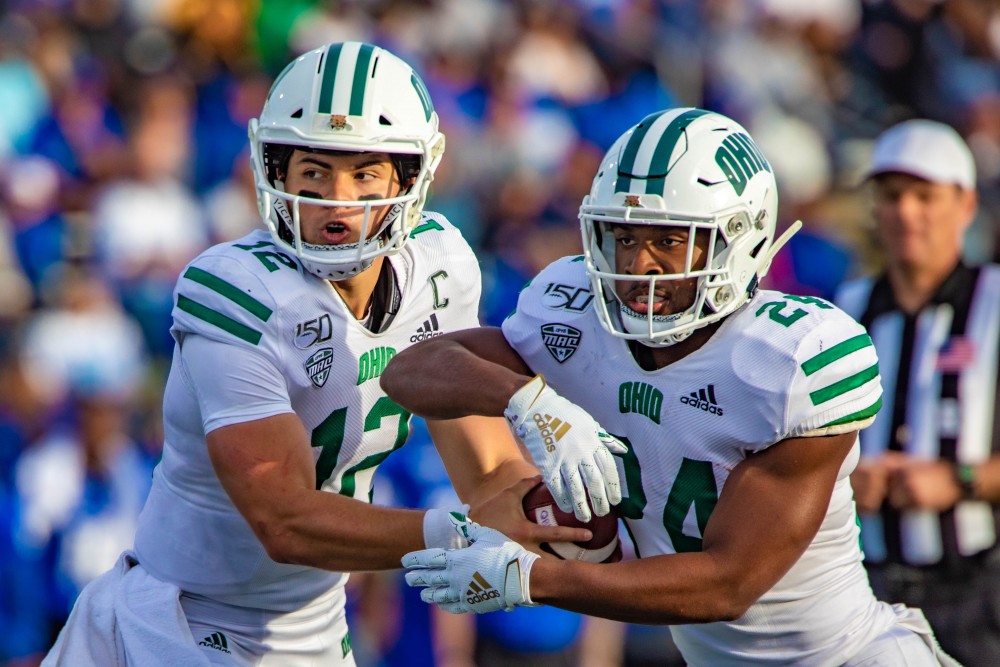 Nate Swanson—Ohio's QB Nathan Rourke (12) hands the ball to RB De'Montre Tuggle (24) in the third quarter
of the first Mid-American Conference against the Buffalo Bulls in Buffalo, NY on Friday, Oct. 5, 2019.

Football: Five returning players that will be crucial to the Bobcats in 2020

As the page turns toward another season, Ohio must evaluate the talent it still has in its locker room. 2019 was the last year for Ohio greats such as Nathan Rourke, Javon Hagan and Louie Zervos and while their departure forces the Bobcats to adjust drastically, it’ll also give a few returnees the opportunity to shine.

Here are five returning Bobcats that are primed for a big 2020.

Whoever is playing quarterback for the Bobcats in 2020 is going to want to become best friends with Cam Odom. Odom, a redshirt senior, is back for one last go-around with the Bobcats and he has a lot to prove after a disappointing junior season. Hampered by a nagging toe injury he received in week 6, Odom’s impact on the field was hindered. He finished the season with a career-low 19 catches for 207 yards and zero touchdowns.

But 2020 could be the fresh start Odom needs. He underwent surgery on his toe in March and is primed to return to form this season. With other returnees such as Isiah Cox, Shane Hooks and Jerome Buckner, Ohio’s wide receivers have the potential to be one of the best units on the team and Odom’s experience could put the group over the top.

Ohio’s defense was inconsistent for most of 2019, but since it’s returning nine out of 11 starters, it could keep its groove in 2020. One player that could make the process easier is linebacker Jared Dorsa. Dorsa, a redshirt senior, was third-highest on the team in tackles (34) and will be a key staple in improving second-year defensive coordinator Ron Collins’ defense. He won’t be able to do it alone, though. Luckily for him, the Bobcats have a stud on the defensive line that could create problems for opposing offenses.

Austin Conrad led the Bobcats in sacks (4) last season and he has the potential to improve those numbers. Since arriving in Athens with the intention to play tight end, Conrad has excelled since switching to defensive end in 2017. Every year his sack totals have gone up and it’s likely they’ll continue to rise as he enters his senior season.

Ohio’s offensive philosophy is running the football, and if it wants to do that well it’ll put the ball in the hands of De’Montre Tuggle and O’Shaan Allison. Now that Rourke is gone, Tuggle and Allison most likely will be the focal point of the offense in 2020. That shift in focus could mean a lot of points for the Bobcats. In 2019, the backfield tandem combined for 1,513 yards and 17 touchdowns on 239 carries. With Rourke gone, a larger bulk of the carries will transfer over to Tuggle and Allison.