A look at the finances at OU, including increased tuition

The Ohio University Board of Trustees approved a 3.5 percent tuition increase in their January meeting.

If the State of Ohio approves a 2 percent state tuition cap, Ohio residents’ annual tuition will increase from about $12,192 to about $12,618, according to a previous Post report.

The increase in tuition is partly due to the amount of college-bound students in the Midwest decreasing, Chaden Djalali, executive vice president and provost, said in a previous Post report.

This is the first time tuition has increased in four years. 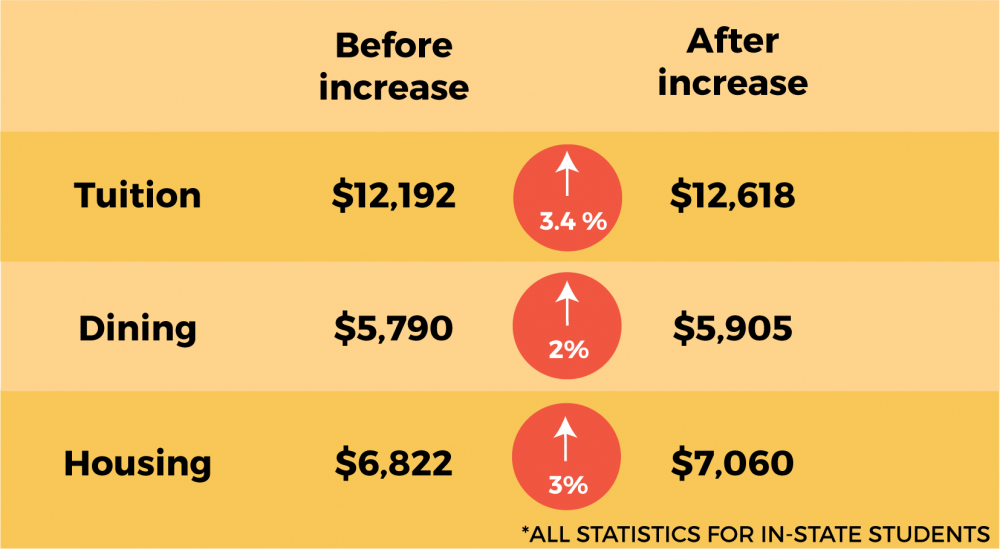 Tuition is based on the amount of credit hours students are taking. If a student is full time, which is a student taking more than 12 credit hours, the cost is capped until 20 credit hours.

The normal amount of credit hours is 15 for one semester.

The OHIO Guarantee confirms that whatever the tuition, housing, dining and fee rates is set at when a student enrolls will remain the same for four years, according to OU’s website.

There are five tuition-related fees that are added to the cost of attending OU.

The instructional fee covers the associated costs with instruction, according to OU’s website.

The next fee is the general fee, which funds services and activities to promote students’ emotional and physical well-being and cultural and social development outside class.

The non-resident surcharge fee requires out-of-state students to pay the fee “to fund instructional costs the state pays for on behalf of qualifying Ohio residents,” according to OU’s website.

The technology fee is dependent on the student’s college. It supports technology usage in classrooms and labs.

The student info system/network fee funds the information technology and undergraduate, graduate and professional students in all programs are required to pay it.

Including eLearning students and regional campus students, there are 29,985 undergraduate students.

However, the 2020 fiscal year will see an increase in scholarship support for the third consecutive year, according to a previous Post report. Auxiliaries have also budgeted an additional $500,000 toward instructional scholarships.

OU’s 2019 fiscal year projected earnings was $47.8 million, but OU was down about $13 million in January. David Guame, OU’s director of investments, credited this to the volatile stock market in December.