Athens may seem small, but one thing is for sure: a lot is packed into the few miles surrounding campus. So if you’re worried about not having enough to do, don’t worry, we’ve got you covered. Here are six staples of Athens to visit in your first year: 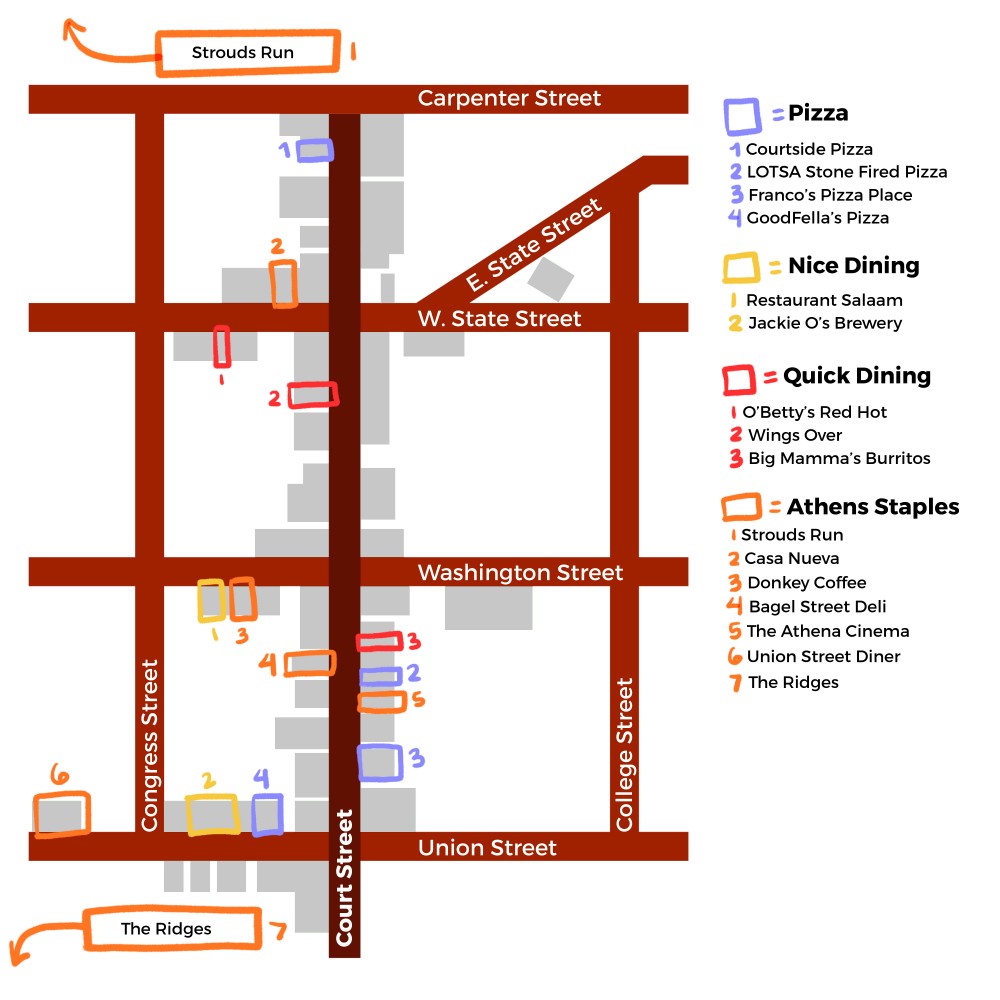 A favorite for students, Donkey Coffee is one of the best study and hangout spots in Athens. With delicious fair trade coffee, a great atmosphere and open mic and poetry nights, what more could you ask for? It’s open late, too, so head down to 17 1/2 W Washington St., right off of Court, for late-night lattes.

If you’re craving a sandwich with your Donkey Coffee, consider heading back down the road to Bagel Street Deli at 27 S Court St. Another staple of the Athens food scene, Bagel Street offers a staggeringly large menu of bagel sandwiches, ranging from the common place to the strange. Breakfast, lunch, dinner and dessert bagels cover the menu board, so there’s no doubt you’ll be back many times trying to taste everything they have to offer.

Just outside the Richland roundabout, The Ridges is a great place to explore with friends while the weather is still warm and sunny. Formerly the Athens Lunatic Asylum and tinged with a multitude of ghost stories, The Ridges is a complex of buildings that now houses administrative offices, the Voinovich School of Leadership and Public Affairs, an observatory and the Kennedy Museum of Art. Check out the latest exhibits or simply follow the beautiful hiking trails that wind through the former hospital grounds. And keep an eye out for public telescope nights!

If you’re into hiking, canoeing, kayaking or just want a nice picnic spot, Strouds Run is the place to go. Go out on the lake or explore the trails, or you can make use of the volleyball and basketball courts with friends!

Another staple of the Athens food scene, Casa Nueva offers some of the best Mexican cuisine in town. The restaurant and cantina frequently brings in live music and also hosts themed dance nights each semester. Even better, Casa pays it waiters fair wages and does not require tipping!

If you’re interested in seeing something other than the biggest blockbusters, consider heading to the Athena Cinema on Court Street next time you want to see a movie. The Athena shows less widely-released films alongside student films and also hosts the Athens International Film and Video Festival each spring.