The Ohio volleyball team (13-18, 7-9 Mid-American Conference) came into the 2018 season with high expectations. But the Bobcats started off slow and entered MAC play with a 5-11 record, and they never really found their footing throughout the year.

Ohio pulled together a couple three-match winning streaks and even won its first round MAC tournament match against Northern Illinois, but the season was somewhat of a disappointment for a team that had hopes of sitting atop the conference.

The good news for Ohio is that it will only be graduating three players, and most of its key players are set to return.

One of those players is junior Lizzie Stephens, who led all returning players with 335 kills last season.

Middle blocker Tia Jimerson missed a month of action during the fall with an injury, but made an impact after she returned and finished third on Ohio with 193 kills in only 21 matches. 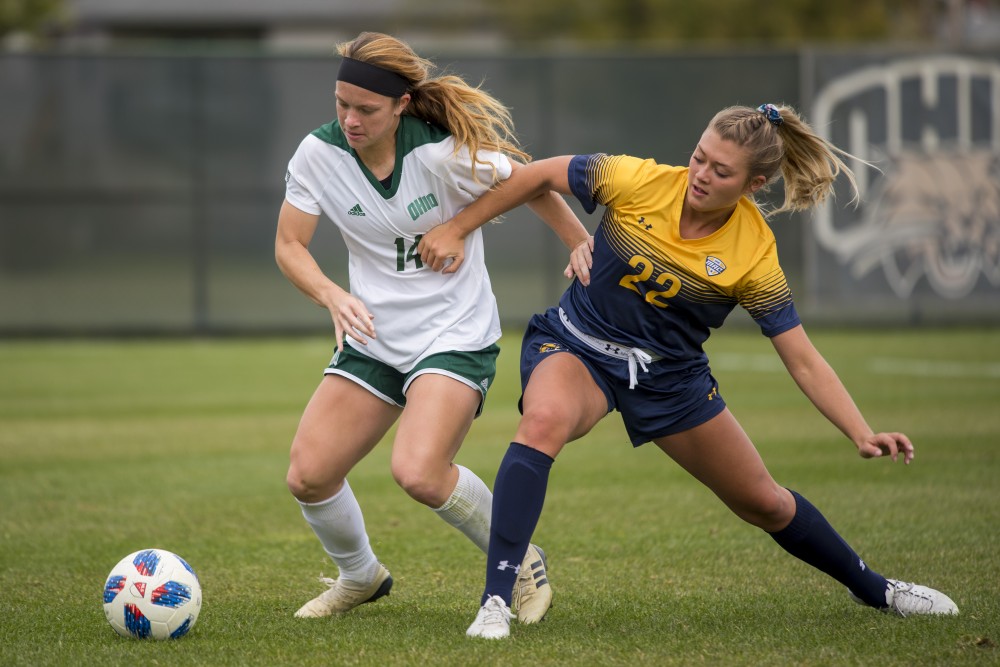 In 2017, the Ohio soccer team was the No. 8 seed in the MAC Tournament and lost its first round matchup to Kent State.

In 2018, the Bobcats (9-8-3, 6-3-2 MAC) again ran into the Golden Flashes in the conference playoffs, but were able to to change their fortunes from a year prior.

Ohio managed a 2-1 victory as the No. 4 seed and avenged its playoff loss from 2017, which served as the biggest highlight for a strong season from the Bobcats.

Ohio’s season ended when it ran into No. 1 Bowling Green in the semifinals, but the Bobcats improved significantly in 2018.

Ohio is in good position to build on its success next season as it returns its four leading scorers, Alivia Milesky, Sarina Dirrig, Sydney Leckie and Abby Townsend.

For the seventh straight year, Ohio field hockey (5-12, 2-4 MAC) had a losing record. 2018 was different from past seasons, though, in that the Bobcats flashed signs of hope for the future.

Ohio made the conference tournament for the first time in three years and even secured a victory over Ball State in the quarterfinals.

Sophomore Jillian Shive, the Bobcats’ leading scorer, was tied for second in the MAC with 11 goals.

In her second season as head coach, Ali Johnstone will retain most of the team from the 2018 season with only two seniors set to graduate.

The Bobcats will look to clean up mistakes and find the ability to close out tough games next season. The team lost four games by a single goal this past season, and Ohio looks like it may be able to find that next step in 2019.

The Bobcats saw a lot of success in the fall as they grabbed a top-five finish in four of the six October tournaments, including a first place finish in day one of the Firestone Invitational.

The spring was not as fruitful for Ohio, and it had one top-five finish and placed sixth in the MAC Tournament. The team is still young, however, with only one senior set to graduate.

Sophomore Zach Crawford led the way individually for the Bobcats and earned All-MAC Second Team honors after averaging a team-best 72.62 score over 26 rounds. He achieved three top-seven finishes and finished first at the Firestone Invitational in October.

Frank Solich is still searching for his first MAC Championship as he enters his 15th season with Ohio, and there’s plenty of reason to believe he’ll get it next season.

Nathan Rourke will look to replicate his masterful 2018 season where he threw for 2,434 yards, 23 touchdowns and rushed for 860 yards and 15 touchdowns. Julian Ross will likely take over running back duties with the loss of A.J. Oullette, and Cam Odom should lead a young, but promising group of wide receivers.

On defense, the Bobcats will look to stay atop the MAC in forced turnovers. Ohio led the conference with 16 interceptions last season and a +13 turnover margin last season, and it should find similar success next season with the return of safety Javon Hagan and cornerback duo of Jamal Hudson and Marlin Brooks.

Ohio will have a different look in 2019 after former coach Sean Hogan stepped down in March.

Cole Bell, who coached at the University of Jamestown for the last two years, will attempt to recreate Hogan’s success behind the bench next season. Bell was announced as Hogan’s replacement in early May, and he shouldn’t have too much issue with picking up where Hogan left off — in the American Collegiate Hockey Association National Tournament.

The Bobcats return all three of their top scorers in 2019 and have one year left with Jimmy Thomas, who has proven to be one of the top goalies in the league and can devour plenty of minutes throughout Ohio’s six-month season.

Bell will be tasked with replacing six seniors, but with the strong foundation of youth Hogan instilled with Ohio, Bell should have the tools he needs to keep the Bobcats at the top of the ACHA rankings.