Historic Roots in a Historic Program

Ohio entered a new era after it introduced Jeff Boals as its new head coach in February. Boals, who played with the Bobcats from 1991-95, is no stranger to the rich basketball history in Athens, and he’ll look to add more defining moments to Ohio’s history when the Bobcats open their season in November. 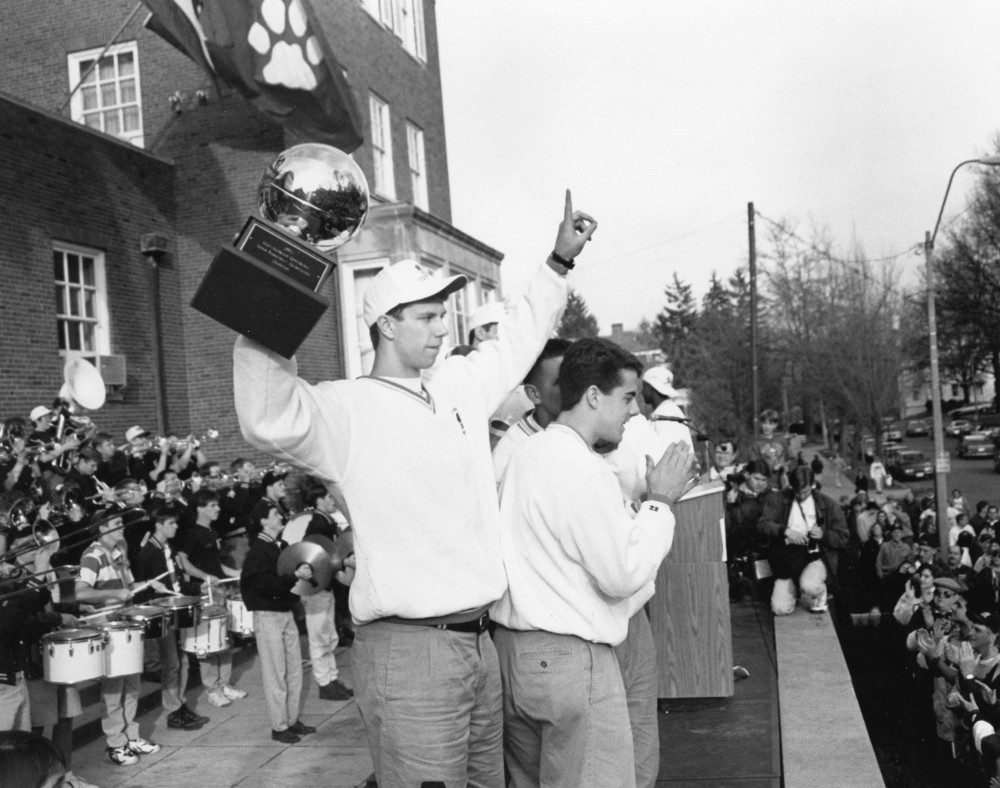 Jeff Boals (left, with trophy) during his time as a player at Ohio.

Boals will face stiff competition, though. Here’s five of the most notable games in Ohio men’s basketball history.

The picture of Devaughn Washington finishing a dunk with a thunderous yell will never disappear from Ohio history.

That happened when the No. 14-seeded Bobcats pulled off the biggest upset of the first round in the 2010 NCAA Tournament, defeating No. 3 Georgetown 97-83. It was Ohio’s first NCAA Tournament win since 1983 and one of the best games the Bobcats had under John Groce.

Ohio lost to No. 6 Tennessee in the second round, but the Bobcats didn’t have to wait long to return to the tournament.

Ohio shocked the country again in 2012 when it took down No. 4 Michigan 65-60 in the first round of the NCAA Tournament.

This time, though, the Bobcats stuck around. They defeated South Florida in the second round to advance to the Sweet 16 for the first time since 1964 and nearly pulled off an all-time stunner against No. 1 UNC before they lost 73-65 in overtime.

That was the peak of the Groce era in Athens, but none of it would have been possible without upsetting Michigan and stealing the hearts of college basketball fans yet again.

Kentucky probably viewed its 1997 game against Ohio at The Convo as another meaningless nonconference game. It certainly wasn’t the most memorable game of the season for the Wildcats, who eventually became national champions in March and played under coaching legend Tubby Smith.

For Ohio — and more specifically, The Convo — the game will be remembered for another few generations. The Bobcats suffered a 95-58 beating but were honored to be one of the 35 teams to fall against one of the greatest teams in Kentucky basketball history.

Ohio christened The Convo with a 80-70 win over Indiana 50 years ago. The Hoosiers were in a bit of lull and finished the season with only a 9-15 record. The Bobcats, who finished 17-9, didn’t have much trouble picking up a win over a Big Ten opponent to begin a tenure in The Convo that has lasted for over 50 years.

It’d be tough to pick the best game Ohio has played against Miami in the “Battle of the Bricks” rivalry, but its 70-68 win against the RedHawks in The Convo should be at the top.

Ohio was down 68-67 when Tommy Freeman received a pass and shot a 3 with two seconds left. It was a perfect swish, and when the RedHawks missed their hail mary attempt, Freeman was mobbed by the hundreds of students in the O Zone and became an all-time hero in the storied rivalry.

Freeman’s shot began a thrilling month for the Bobcats, who won the Mid-American Conference and pulled off the wild Georgetown upset three weeks later.