Whether it’s joining a student organization, or taking advantage of open mic nights at local coffee houses and restaurants, Athens is the place to be for budding, young talent.

College is a time for many students to explore countless opportunities to express themselves. Ohio University and Athens alike offer a wide range of options students can take advantage of to showcase their talents. Here are just a few creative outlets someone interested in comedy, singing or playing an instrument can check out. 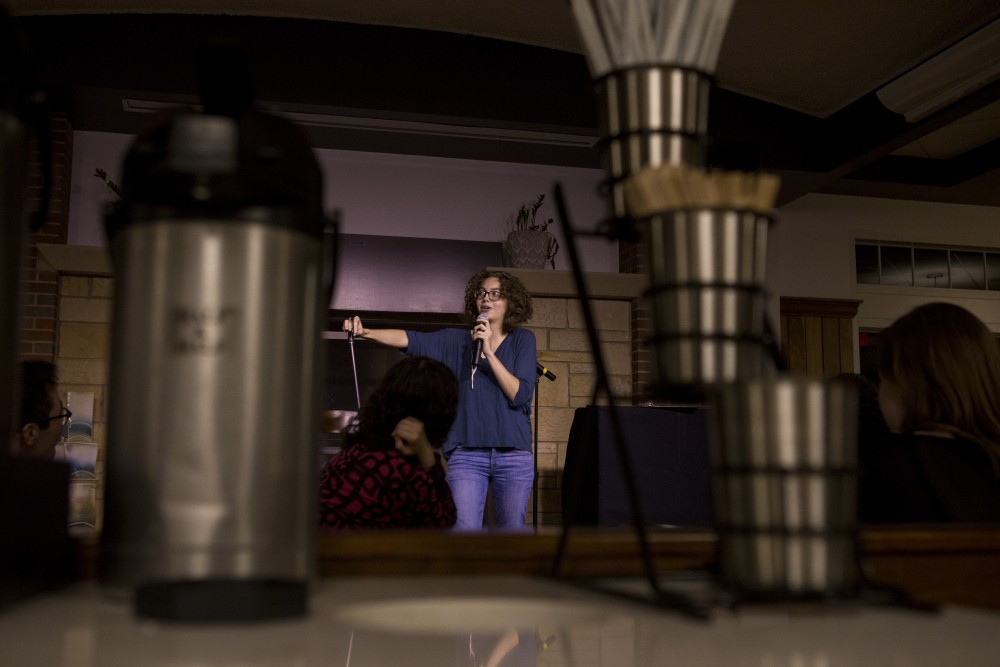 
OU’s Blue Pencil Comedy student organization is a group of individuals who perform stand up comedy. It usually performs on Saturday nights at either Front Room Coffeehouse, or Donkey Coffee and Espresso, 17 W. Washington St.

Blue Pencil members bounce ideas for jokes off one another, and work collaboratively to put on the best performance as possible. Matthew Connell, a junior studying physics, has been a member of Blue Pencil since his freshman year, and hasn’t looked back.

“I love just participating in comedy, and stand up is a really fun and independent experience I think,” Connell said.

Connell has found nothing but tremendous support from his fellow peers, and has made friends along the way.

“With the group of Blue Pencil Comedy, it makes the stand-alone kind of act into a community activity,” Connell said. “So it’s really nice to have all those friends who are doing it with you.”

The group is always welcoming new members who have a passion for telling jokes. It’s an experience Connell urges anyone to try out, because Blue Pencil is supportive of all talent.

“If you have any desire to do stand up, you could go once, you could go a million times, you can come to the meetings and make a million friends, or just have one fun comedy thing on stage,” Connell said. “It’s very flexible for whatever you are comfortable with, and whatever you want to do with your talents.”

Like Blue Pencil, Black Sheep Improv is a comedy group on campus aimed at making audiences laugh, and showcasing young comedians and their talents.

The group consists of two improv troupes that hold free performances Thursday nights in Baker Center Theater at 9 p.m. Black Sheep also offers improv workshops for anyone interested. Students have the chance to audition for the group at the beginning of Fall Semester.

Black Sheep is a collaborative group that aims at helping members become better comedians, while making each other laugh along the way.

Not only is Donkey Coffee and Espresso a great place to go for coffee, but it’s also a place people go to do homework, relax and listen to local artists share their music with an audience.

Donkey’s Open Stage has become a popular place for folks to come and share their favorite songs. Filled to capacity each week, the open stage promises a receptive audience for musicians who are looking for a place to showcase their material.

Allison DeWitt, the booking manager for Donkey, said a wide range of talent signs up for the open stage nights.

“The guitar and singing is the most popular, but people play piano and sing, some people sing acapella, and some people just play instruments and don’t sing,” DeWitt said.

Since the beginning, Donkey has always found it important for people to showcase their talents. DeWitt said Donkey began to hold open stage nights because co-owner Chris Pyle is a huge music fanatic, and he wanted to have a space where musicians could come and play.

“I really think it’s important for people to just go and express themselves,” DeWitt said. “Some people are trying to gain fans, some are going just to play songs, make friends and connect. It’s really awesome.”

The atmosphere of Donkey is welcoming to any and all talent, so it’s no surprise people are supportive of fresh talent.

“People are usually pretty quiet. There are people that come every week that don’t play anything, but they just want to listen,” DeWitt said. “Everyone claps at the end of songs, and we try to be as supportive as possible with everybody.”

Casa Nueva, 6 W. State St., also provides evenings for musicians to showcase their talents up on stage. Like Donkey, Casa sets aside time for anybody to come and share their music with an audience.

The atmosphere at Casa is always buzzing with live music and eager audiences who look forward to the sweet sounds. Known for its hip environment, the Mexican-inspired food restaurant provides a welcoming space for all musicians and their talents.